B_Munro said:
(Still too miffed about losing Mongolia, etc. to start right back at the M's, so I'm skipping ahead to do some Is at first
Click to expand...

Well, hopefully, you get back to the M in the future, sorry about the files.

CyberPhoenix001 said:
So, I'm assuming the top one is a diaspora, multi-state-style wank, the left one is a modern Israel wank, and the right one is an ancient Israel wank?
Click to expand...

Correct. Not entirely happy with the bottom two: may change those. Anyhoo, Ireland next...

Well, yes, that is my intention, but who knows? Next week I might receive millions from an unknown benefactor and become terminally lazy. 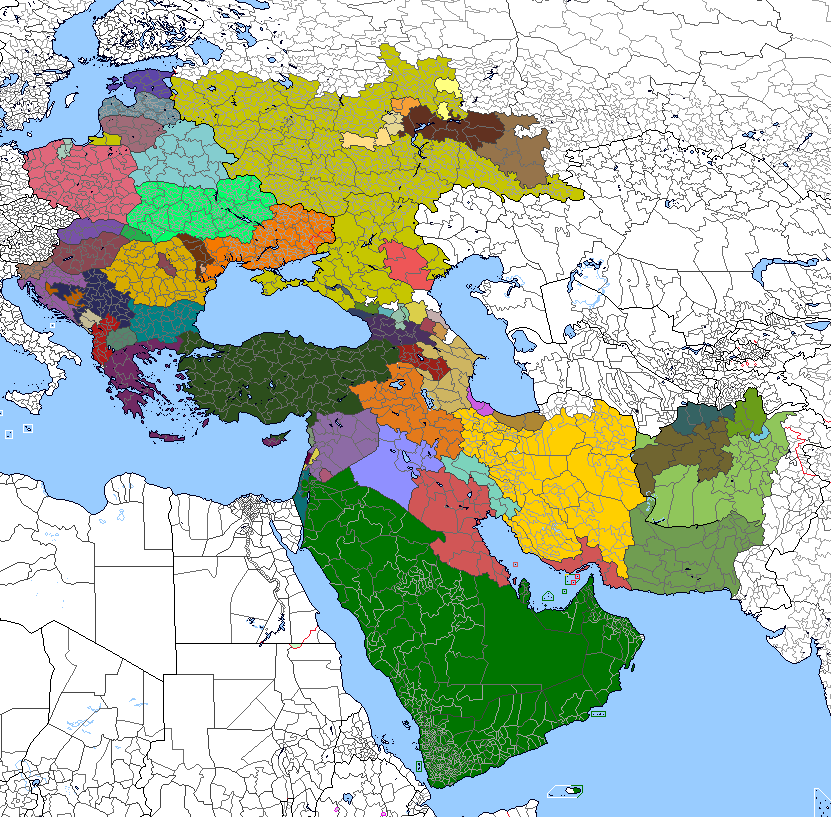 Done Eastern Europe and most of European Russia. Apart from the Volga states and to a smaller degree Bosnia, Europe's super easy compared to the Middle East. Currently in ieed of secondaries: Ukraine, Malorussia, Russia, Latvia, Iran, Arabia. Also not sure about Arabia and that red Shia Arab state.
Last edited: Jun 28, 2020

@erictom333 you might want to recheck Macedonia and Bulgaria. 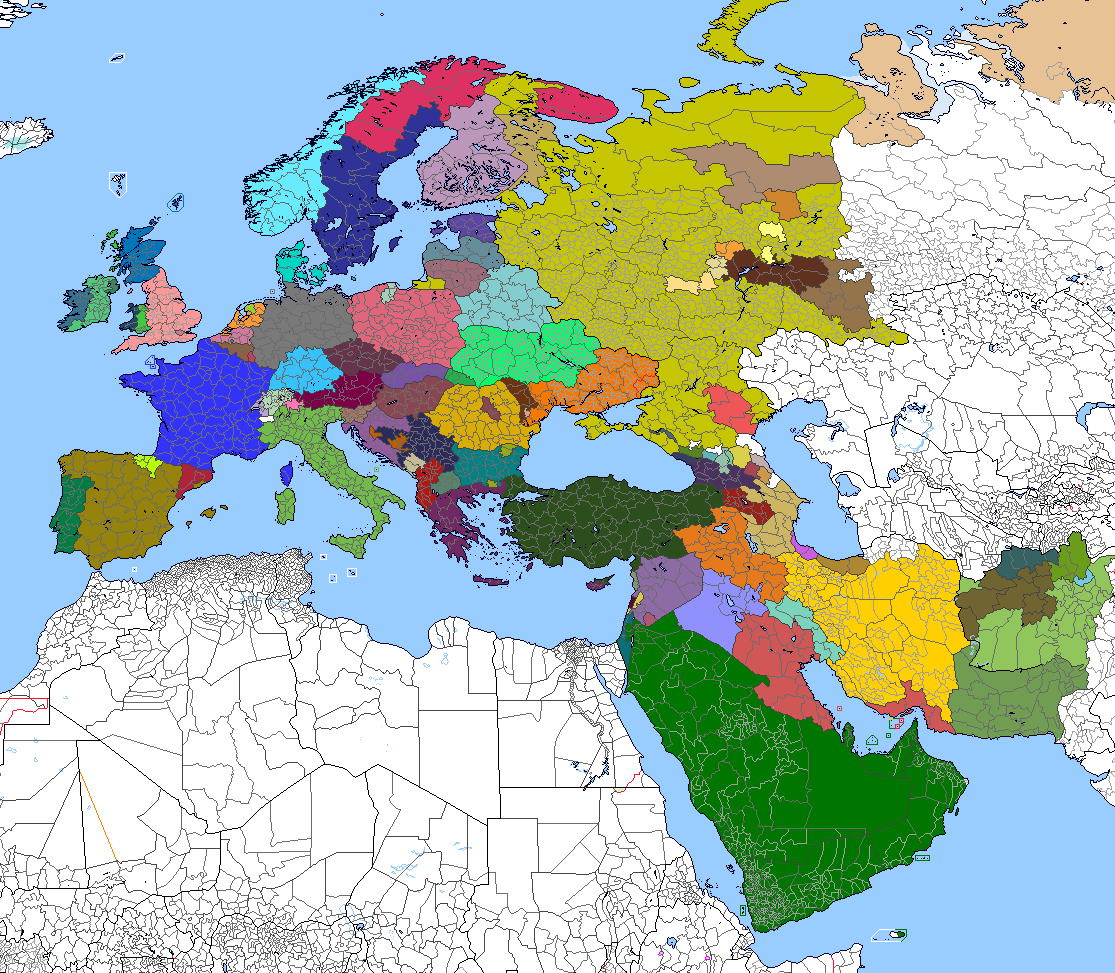 Done the rest of Europe and got a start on Siberia. Fixed Bulgaria and Romania per @Wendell's suggestion.

erictom333 said:
Done the rest of Europe and got a start on Siberia. Fixed Bulgaria and Romania per @Wendell's suggestion.
Click to expand...

what about the Sorbians and Polish Germans in Silesia? 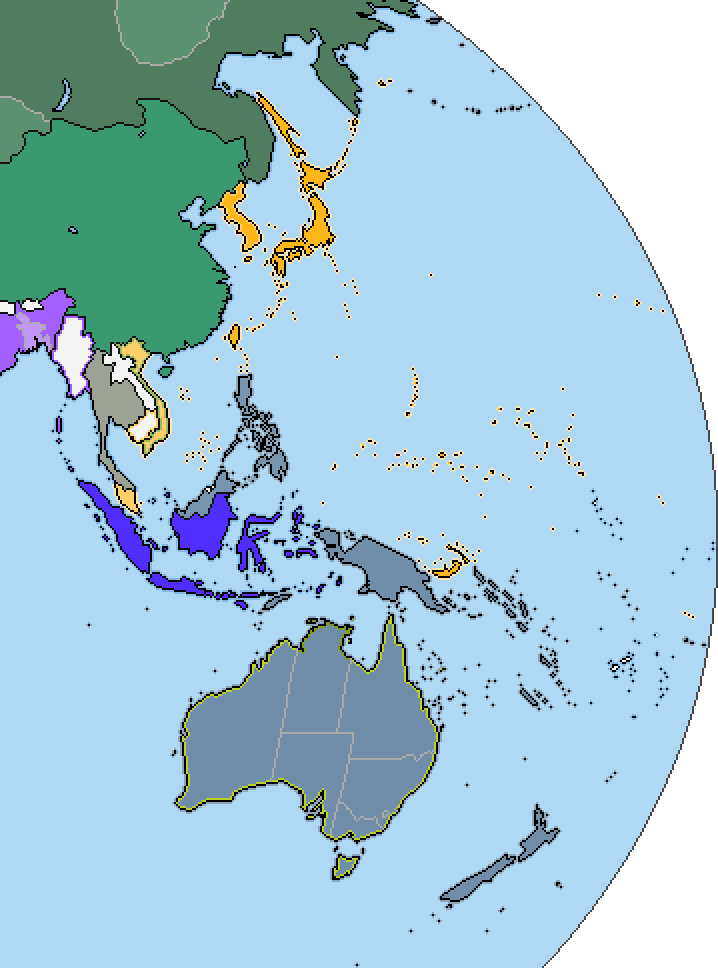 Done the Maghreb and Siberia.

(Still too miffed about losing Mongolia, etc. to start right back at the M's, so I'm skipping ahead to do some Is at first. The second and third maps are a bit tentative right now)

What is up with New Israel in Northern Sweden? I get that they are heretics or something but what/how exactly. They probably self identify as Jews but aren't considered such globally. 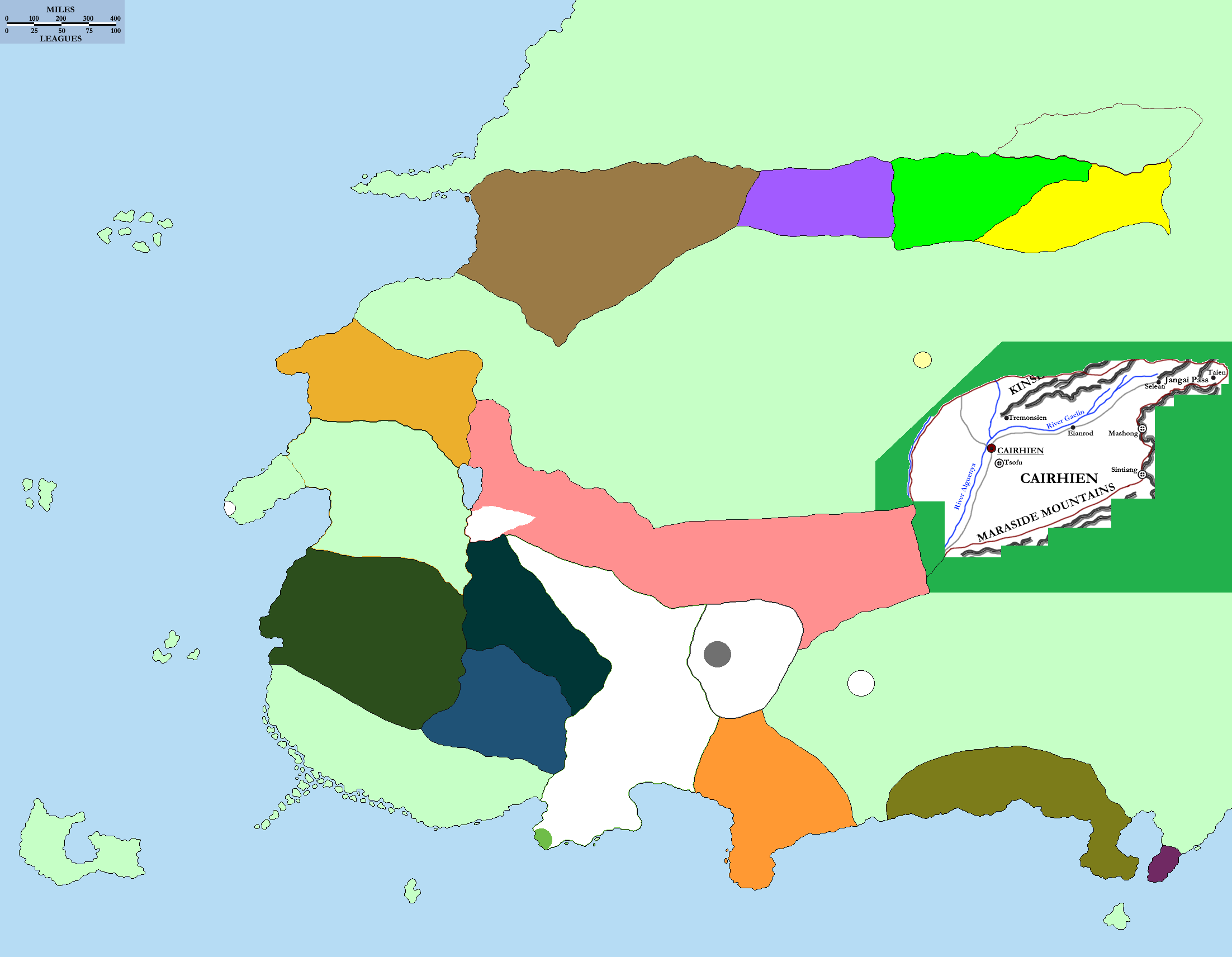 Only Cairhien left to do in this project. 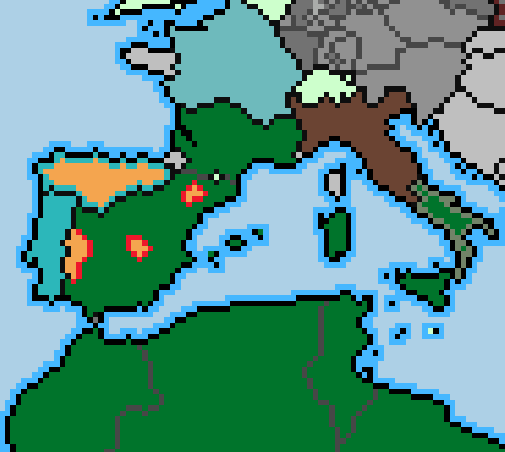 This is not your usual KR future scenario.
Who wins, a unusual, albeit multicultural French exile republic into the Caliphate of Algiers, that still wants Paris, versus the Germans, who are now very confused what the hell happened to the south of them.

Haven't seen a combo of the two yet, so working on a KR future scenario combined with a mostly good Euro-African caliphate.

Gokbay said:
What is up with New Israel in Northern Sweden? I get that they are heretics or something but what/how exactly. They probably self identify as Jews but aren't considered such globally.
Click to expand...

Idea stolen from SRegan: an even messier Reformation leads to some pretty radical offshoots of protestantism taking root, and in northern Sweden a group arises which converts to a form of "primordial Christianity" which involves acceptance of Jesus as the son of God but the rejection of everything after the first generation of Jesus's disciples as heresy. They self-identify as Jews, the "true" Jews in fact and follow Mosaic law pretty closely. (They welcomed other Jews, but only those who accept the divine nature of Jesus, and had trouble grasping that this is basically a fundamental rejection of Judaism to most Jews: in the last century or so they've finally made it legal for "normal" Jews to become citizens, but they're not exactly getting a flood of immigrants in a world with other options). 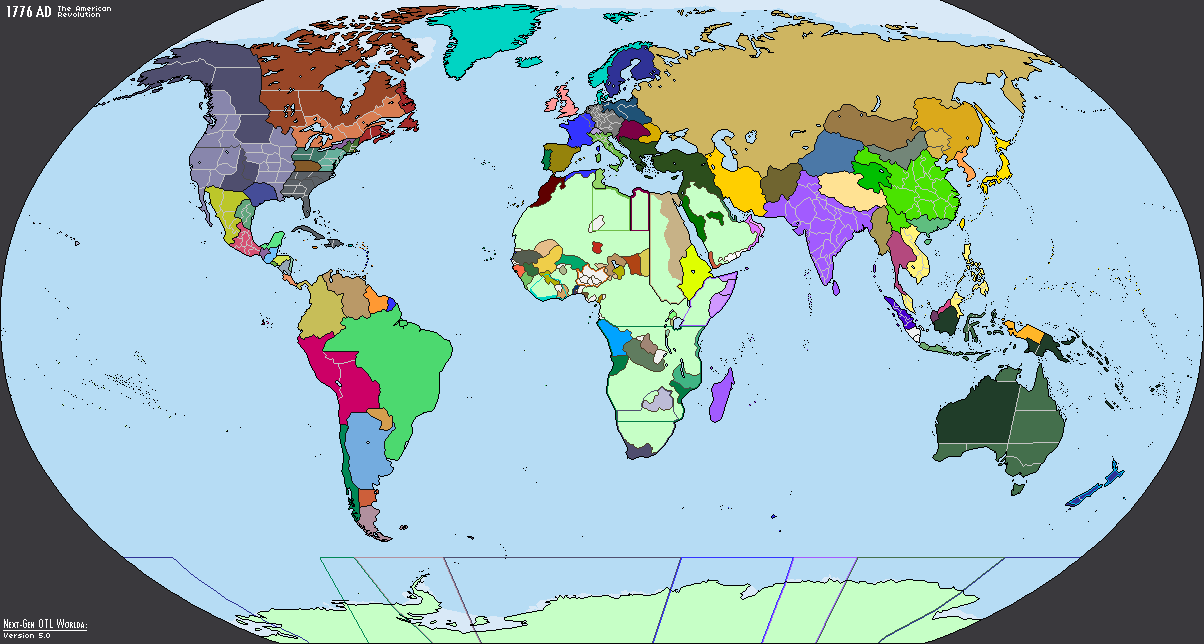 almost done I think, only need to finish up china and the pre alt berlin conference Africa

Indian Somalia and Madagascar. Did you hack my computer and see my current Punjab play-through on Vicky2?
In all seriousness, Interesting map I look forward to the write=up.

I'm nowhere near finishing so it will unfortunately miss MOTF 219, but Ive put a lot of effort in, and I'm rather proud of even what's been finished so far

The Shinnecock, Oneida Indian Nation, and a handful of other American Indian Nations join CARICOM, and the wreckage of the US Northeast has become the Northern frontier for many workers and enterprising young folk. Irradiated and full of dead wilderness but also a treasure, with raw resources, recycled goods, and salvaged artifacts flowing down to Port-au-Prince, Belize City, and San Juan to be distributed across the Caribbean, West Africa, and South America. Jointly administered by the US (whose concerns are primarily focused out West with the majority of the population), the region has a variety of folks and factions living within, from Syrian Christians, Pennsylvania Dutch sects, and Ultra-Orthodox Jews living on the fringes of officially occupied cities, to cults, gangs, and anyone else seeking to hide from the law. There are various sorts of travel from canoes and barges (often insulated to protect from radiation still sometimes leaking into the waters), small planes, and a handful of unscrapped railroads, bringing recyclers, kojic acid, and supplies into the worst zones, and bringing out resources like historical artifacts, scrap metal/electronics, and data from sensors and outposts in the region. It's a deadly land, and while recyclers rarely stay for too long, Lenapehoking still remains a place around 560,000 souls, with ~15,000 living in the Exclusion Zones that make up the majority of it's land. 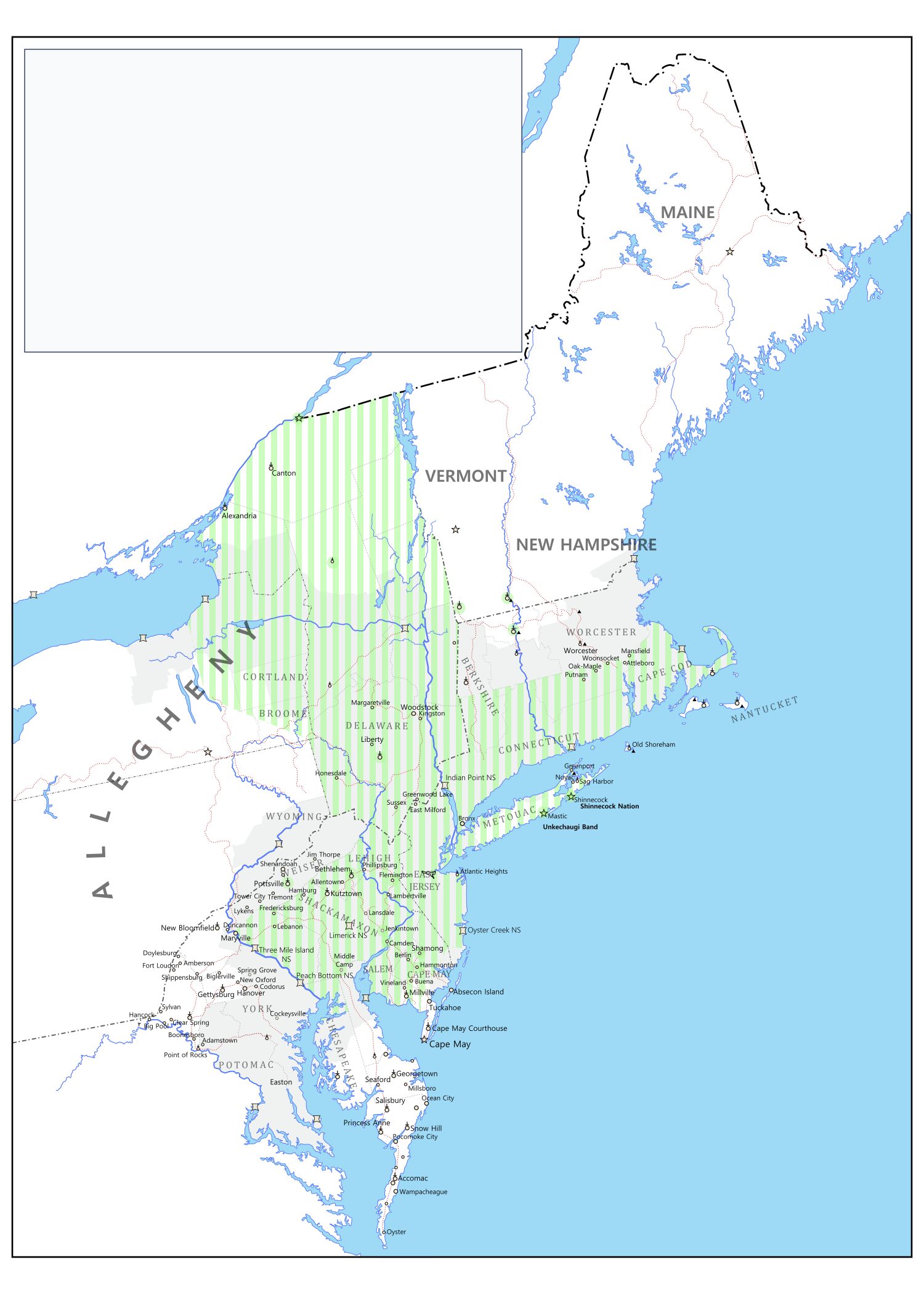 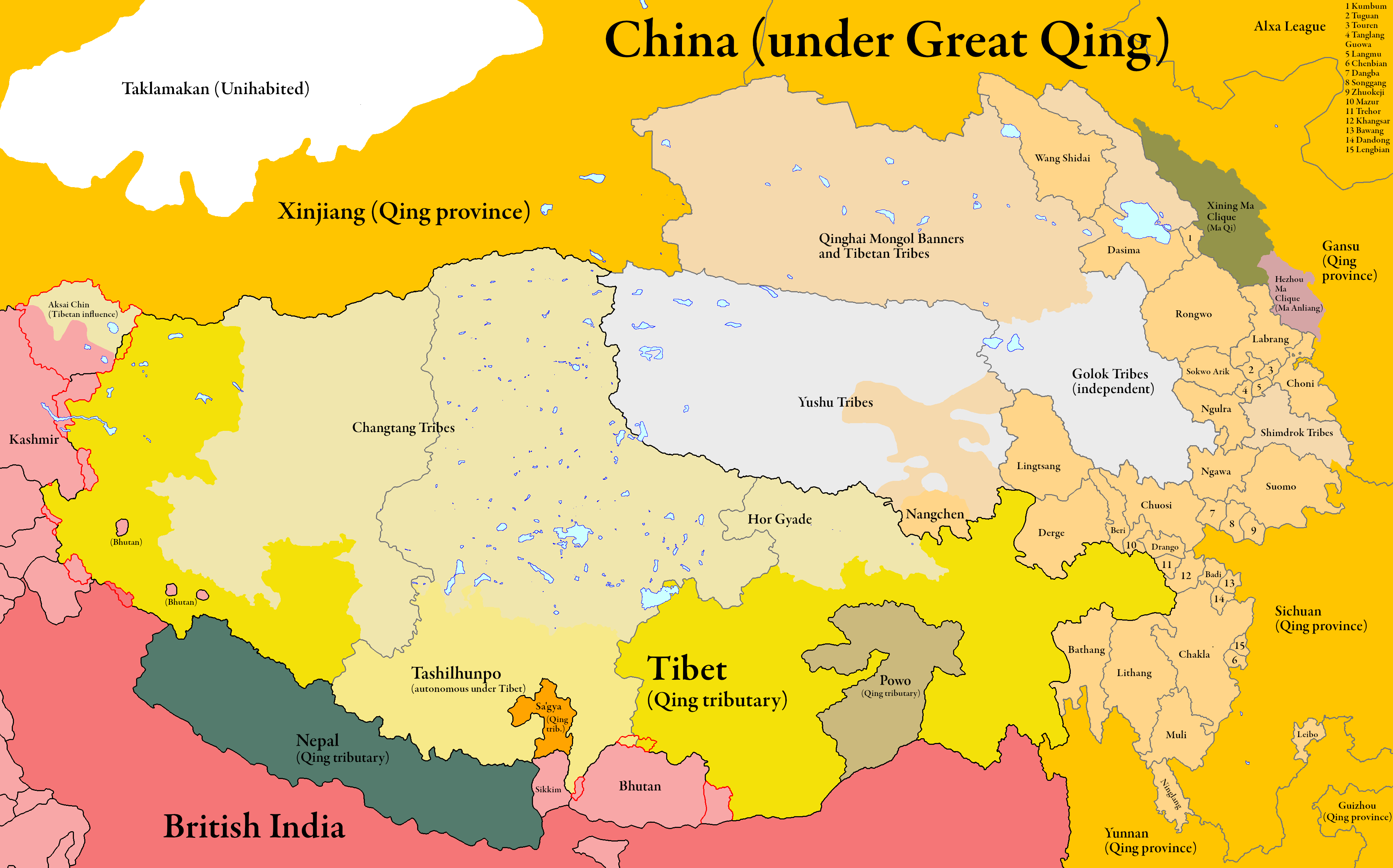 Hm, I wonder what this could be for? 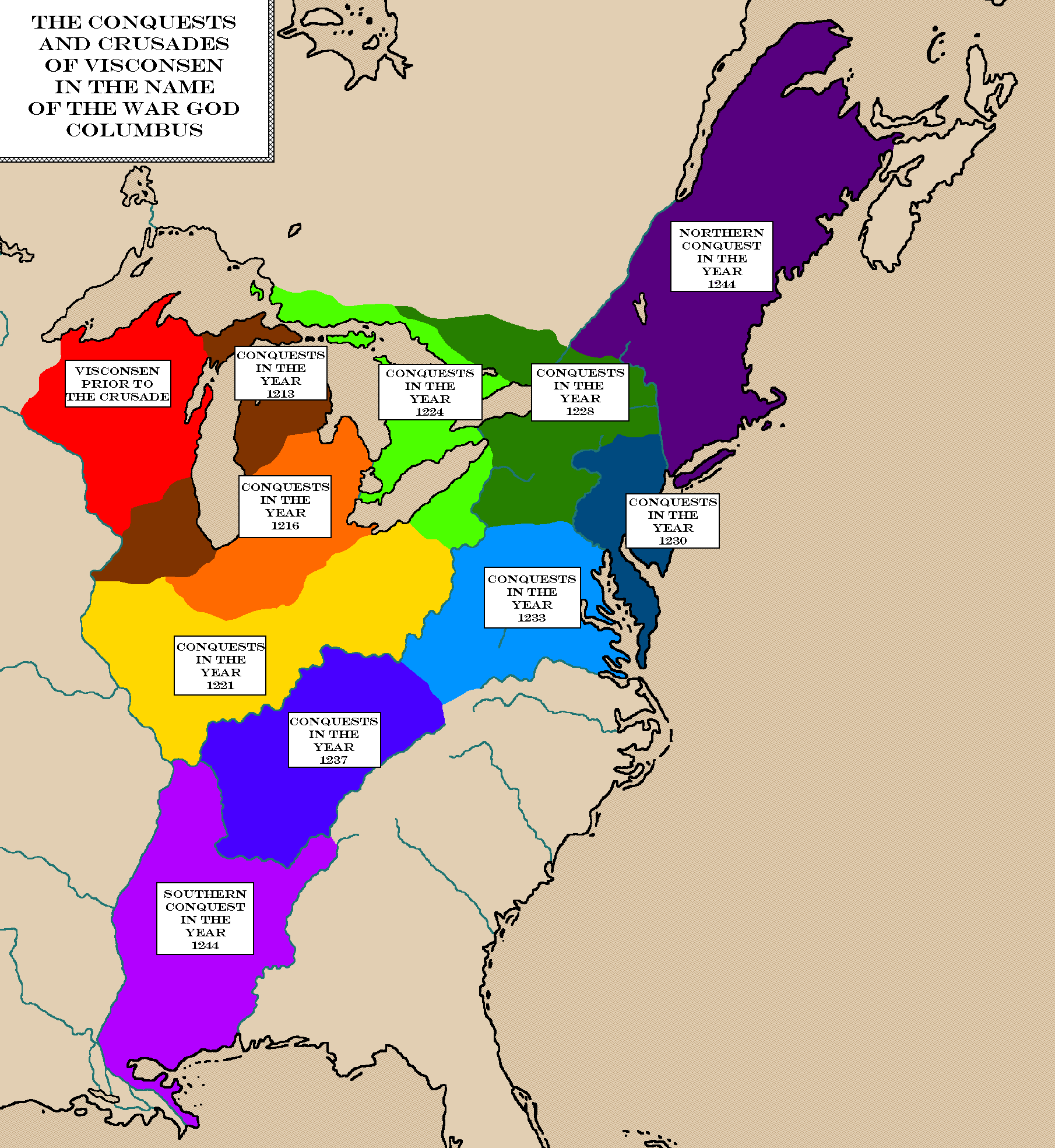 (Still too miffed about losing Mongolia, etc. to start right back at the M's, so I'm skipping ahead to do some Is at first. The second and third maps are a bit tentative right now)
Click to expand...

Is Biggest Israel the Messianic Kingdom as hoped by Jews between 200 BCE to 200 CE? 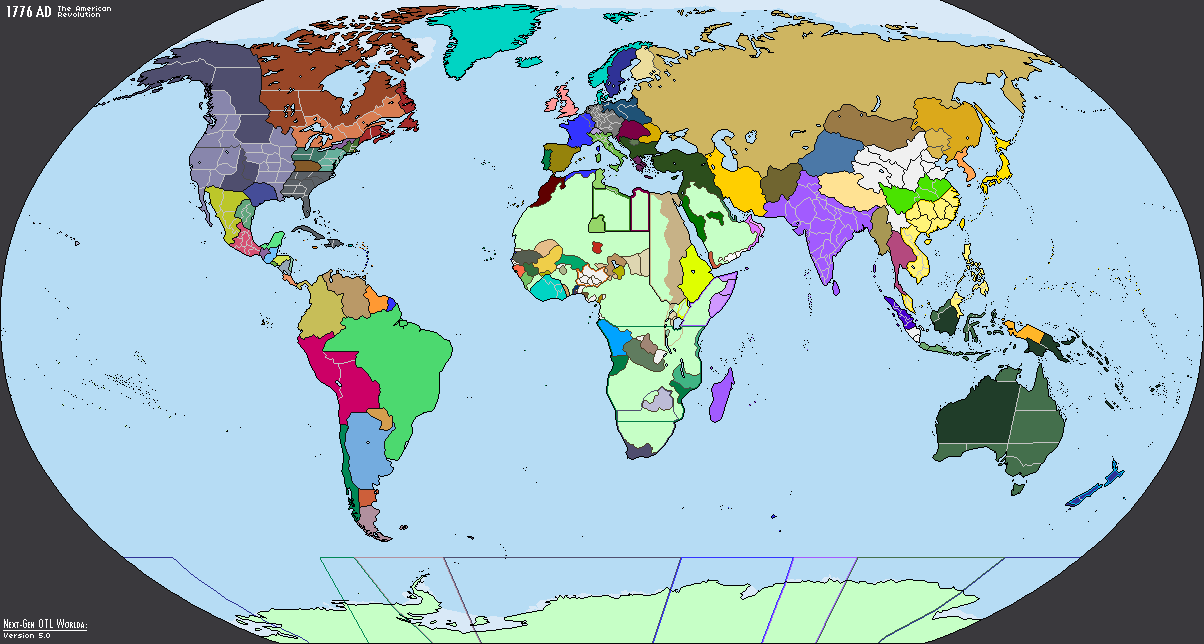 so what are y'alls thought on an Egyptian Congo?
You must log in or register to reply here.
Top
Top