Banned
Trying my take on my own "little" Greater Germany

damein fisher said:
Trying my take on my own "little" Greater Germany
Click to expand...

I don't quite get German Crimea: that seems pretty maximal, unless it's somehow remained Gothic and butterfly-immune.

The Plainsman said:
I have a couple of questions.

What's the countries in Canada about? And why is Morocco and Ethiopia so big?
Click to expand...

Canada/great lakes colonized by an Italy unified early under Venetian leadership. A republican, one man one vote revolt in the interior against a basically oligarchic limited democracy leads to the breakaway of the green region with help of the *USA, while the brown parts remained loyalist (the Italian navy having access helped)

Morocco and Ethiopia are mostly big because the old map of an EU game I'm making a cover of had them big, but let's say the Marinids managed to keep their shit together and were more successful in creating a lasting Maghreb state able to prevent the "nomadization" and excessive decentralization of OTL and lay the foundations for modernization (it's currently the predominant modernizing Muslim state, with colonies of its own in Africa and India). Ethiopia retained access to the sea after the 16th century and has managed to expand into a relative power vacuum given a weak Egypt unable to intervene in the Sudan (really, it would be absorbed by the Ottomans if it weren't for Italian support).

HowAboutThisForAName said:
Sure, though the one used here is a future history climate specifically devised by Mattystereo. Here's the contemporary one.

wish Mattystero wasn't banned, he has just the best timeline ideas and his 2150 timeline is incredible. anyway, is this a post-climate change everything went to shit and now we're living in a post-apocalyptic society? and if it is was there a nuclear war and peak oil crises and a worldwide pandemic? will you also expand this one-shot into a timeline as well? 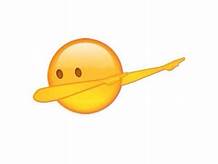 B_Munro said:
I don't quite get German Crimea: that seems pretty maximal, unless it's somehow remained Gothic and butterfly-immune.
Click to expand...

That started out as a German Protectorate after an alternate Great War, but has since become a state in "Internal Association" with the Federation. They are essentially a member of the German Federation, but with a ton of special privileges. Germany kept them separate from Ukraine for two reasons; originally because Ukraine was an Austrian Client State (one of many compromises to allow for a German Polish Protectorate at the time.) and the Germans wanted a holdout in the Black Sea. But later this evolved to serve as a base against Communism.

The Region is now a lot like a German Hawaii, with a independence party to rival Scotland and Quebec IOTL.

Something stupid I decided to make for no reason whatsoever. Color scheme is temporary until I've worked out all the borders.
Last edited: May 10, 2019

Something stupid I decided to make for no reason whatsoever. Color scheme is temporary until I've worked out all the borders.
Click to expand...

Is there any way for me to unsee this map?

SnivyLink said:
Is there any way for me to unsee this map?
Click to expand...

You think it looks awful now, just wait until I've finished it! 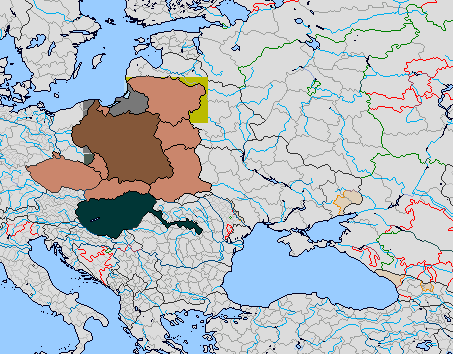 Ooo reductionist Poland Wanks.... my favourite. Can't wait to see it take full shape! if you plan on finishing it.

Daniwani said:
Can't wait to see it take full shape! if you plan on finishing it.
Click to expand...

Well, that question... But there is not much left to do with Poland...

A WIP map for an upcoming TL of mine where the US and the UN win the Korean War only for the world to be on the brink of WWIII in 1967. 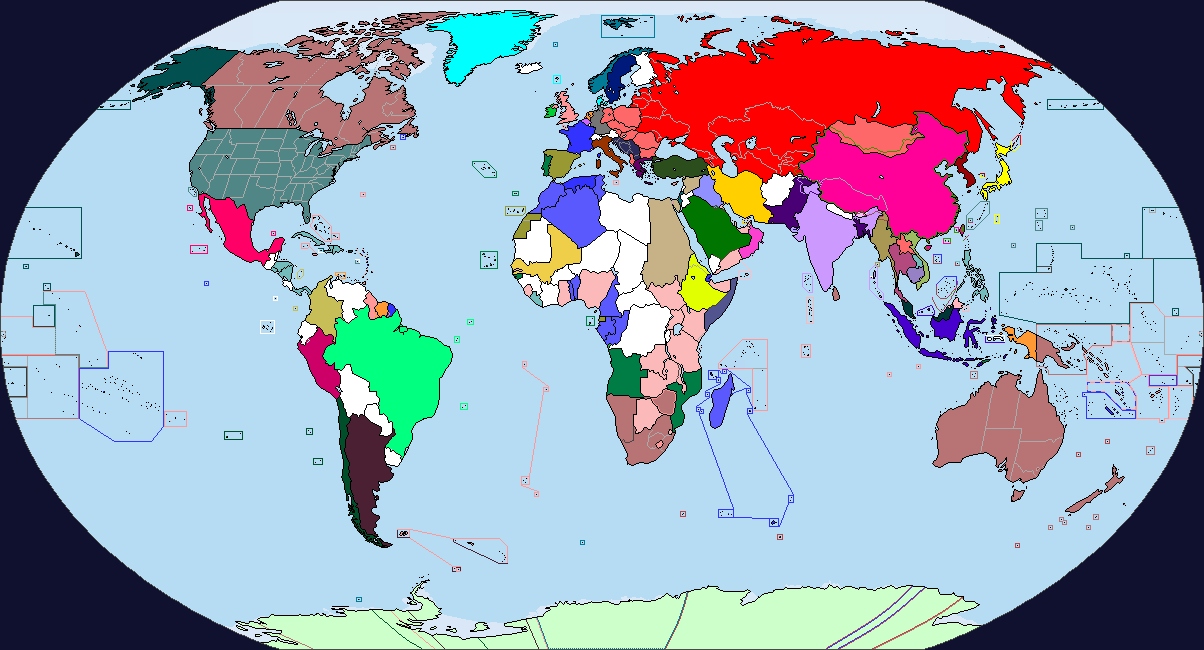 KuboCaskett said:
A WIP map for an upcoming TL of mine where the US and the UN win the Korean War only for the world to be on the brink of WWIII in 1967.

What colour scheme are you using where South Korea is dark red? Seems like it could get confusing, especially with its neighbours

Welcome to The Panopticon.​
It is now January 1st, 2115. A millennium since the nations of the United States of America, Guatemala, El Salvador, Panama, Brazil, Spain, Switzerland, Russia, Iran, Israel, Egypt, the Democratic Republic of the Congo, Taiwan, South Korea, and Japan were brought to an empty world, "The Day the World went away" as it's commonly called in English speaking countries. This anniversary means nothing to the thousands of residents of Australia, better known to the world as The Panopticon, who reside on the continent as prisoners, the culmination of many nations across the New World restoring exile to their penal codes a decade after The Event.

Controlled by a multitude of corporations from around the world, The Panopticon is a penal colony where those found guilty of high crimes ranging from murder, terrorism, and even several war criminals from the "Congolese Warzone" (even after a millennium since the collapse of the Democratic Republic of the Congo) are all doomed to spending the rest of their days being forced to hard labor. By 2115, the Panopticon is home to roughly 100,000 "citizens" as the standards for which crimes gets a person a one way ticket to the Panopticon as, for instance, entire gang hierarchies have been sent off to the Panopticon being sentenced for labor, which has only seen these criminal gangs reform in the company towns they were assigned to. While officially, The corporate government of The Panopticon boasts a 0% crime rating, the company towns across the continent are dominated by gangs of various origins from American crime families, Russian Bratvas, the "Brazilian Syndicate" that traces its roots to the long gone Favela gangs of old, and Neo-Nazis/Far Right terrorists from across the world who have unified under the Banner of the "White Knights". These are only a few of the "Panopticonian" gangs that have formed in the country and the Panopticon State Security Service (PSSS), the mercenaries of the ruling corporate government, are more than happy to ignore the bigger gangs and the thriving black market for as long as the PSSS continues to receive their monthly kickback. This means nothing for the "average person" of the workforce, who is continually watched by the PSSS and the government at all hours of the day. Big Brother would be proud.

"Live free or die trying" is the motto of the Outback or "The Wastes". This region boasts the only citizens to ever escape The Panopticon, even if technically. The Outback is dotted with "tribes" and citystates of various natures and ideologies from far-left "People's Communes" to the right-wing "Christian theocracies" (who practice a wrapped version of Christianity after generations of isolation). There's even a Robin Hood-esque group of horseback riders composed of sentenced Koreans and Egyptians that act more as a group of sellswords. The most powerful "tribes" in this region (not shown on the map) are the Christendom of New America (the main preachers of "Panopticonian Christianity"), the Panopticonian Soviet (a left wing tribe that follows a version of communism that has also been wrapped by countless years of isolation and future imperfection, they believe the "Worker's Prophet" Karl will descend from the Heavens to liberate the oppressed workers of The Panopticon any day now). The current situation is only allowed to remain due to the decree of the government, who has been watching many of these tribes since the very beginning of the Panopticon itself, the reason being a unique look into how humans can descend back into tribalism if given no other options, an interesting experiment from a sociological perspective. The Panopticon government mainly keeps it going on the grounds of it being merely entertaining and interesting to them, even occasionally dropping in guns (that haven't been used since the 20th century mind you) and food to random factions and tribals just to keep things going. One of the current members of the government's "CEO Cabal" has a daughter who wrote her award winning "post apocalyptic fantasy" book series based on her father's notes on the Outback.

Entire families have lived and died in The Panopticon and one wonders if things will ever truly change...

X_Eaglefrost_X said:
What colour scheme are you using where South Korea is dark red? Seems like it could get confusing, especially with its neighbours
Click to expand...

WIP of an alt-Iroquois Confederacy where they preferred to integrate the surrounding tribes as full (if lesser) members of the confederacy. Seneca are Keepers of the Western Doors, but the "Doors" themselves are the Wenro and Erie; similarly, Mohawks are the Keepers of the Eastern Doors with the "Doors" being the Tuscarora and Hochelaga (the St. Lawrence Iroquois), essentially having them as vassals/protectorates. Tuscarora move north a bit sooner due to some clashes with the neighboring tribes and get settled in the Hudson Valley. Susquehannock join as Keepers of the Southern Door; Huron, Neutral, and Petun are all subjugated and are grouped under the "Wendat Longhouse" subject to the Cayuga, Onondaga, and Oneida. Not sure if the naming is particularly consistent. I'm still looking for good settlement names since not too many Huron, Neutral, Erie, or Susquehannock placenames were kept around so I'm resorting to names given by the 5 Nations. If you have suggested changes or placenames, feel free to let me know. 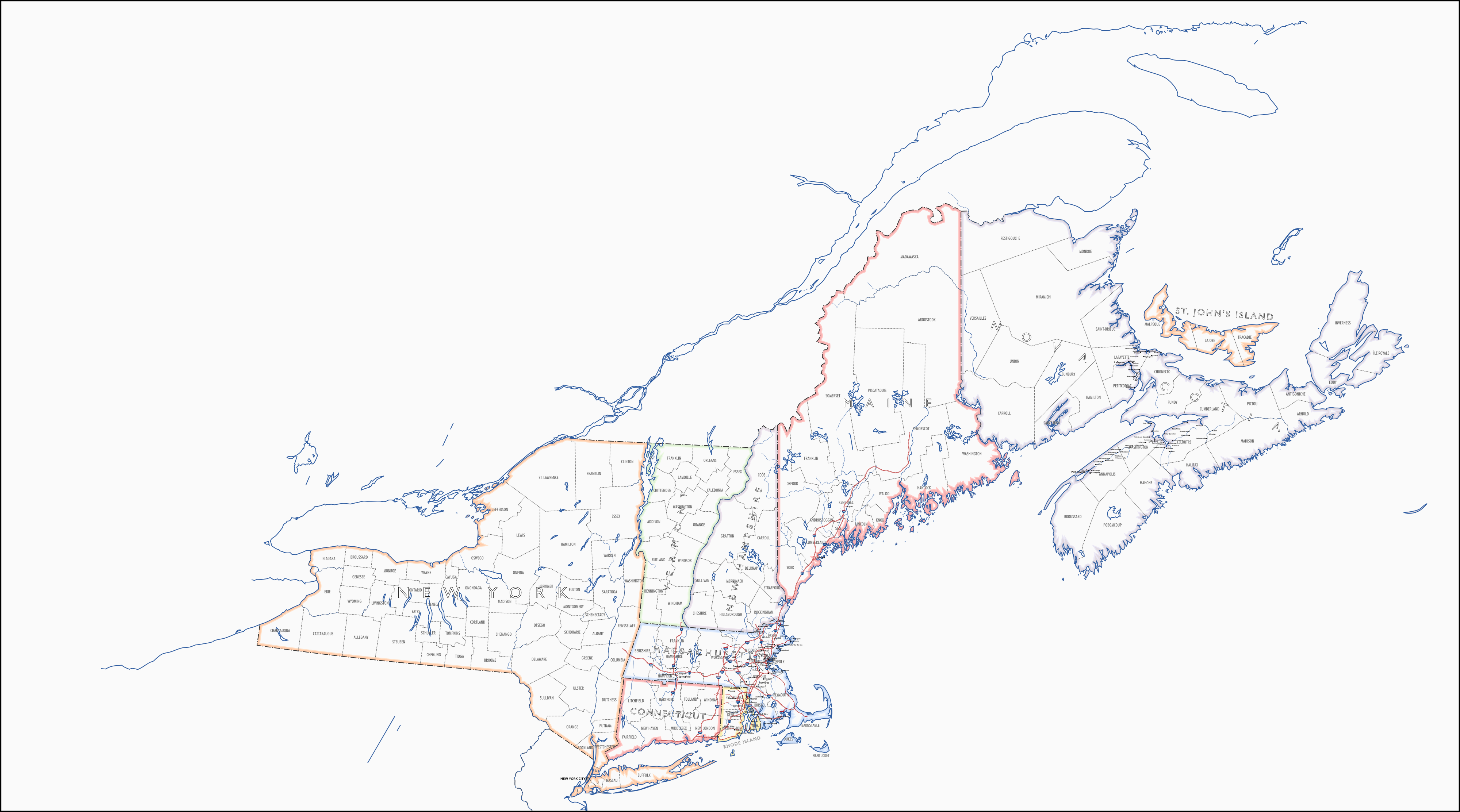 You mean century?
You must log in or register to reply here.
Top
Top