In 1964, having been urged to do so by the Kennedy family, John Glenn resigned from NASA to run in the Democratic Primary for Ohio Senator against incumbent Stephen Young. He withdrew when he hit his head on the bathtub, and was left with a concussion and damaged inner ear. Glenn ran again in 1970, but narrowly lost the nomination, resisted the urge of the Ohio Democratic party to run for Lt Governor in 1974, and instead ran for and won the Senate election in 1974.

In short, John Glenn could have won the 1964 election and have been a Senator a decade before he became on in the OTL. And had he not secured the nomination or won that election, he would still be in a better position to win another election.

What if John Glenn had not been injured, and had run for the nomination in 1964?

A major issue from my standpoint is that you've bumped John Glenn up an electoral era. OTL, Glenn was a viable candidate for the presidency or vice presidency in 1976, 1980, and 1984.

Emperor Norton I said:
A major issue from my standpoint is that you've bumped John Glenn up an electoral era. OTL, Glenn was a viable candidate for the presidency or vice presidency in 1976, 1980, and 1984.

So potentially an astronaut presidency during the glory days of Apollo? That could be an interesting TL.

The bump also means Howard Metzenbaum likely gets elected in 1974

Mike Stearns said:
So potentially an astronaut presidency during the glory days of Apollo? That could be an interesting TL.
Click to expand...

Getting him into the presidency may be difficult. While he could be a candidate in either '68 or '72 or run for the nomination, if he became the nominee in 1972 its more than likely going to Nixon all the same.

In 1968, I would put more of my money on his being a strong possibility for the VP nominee for the Democratic ticket. He's young, he's an American hero who reminds America of the Kennedy years, and he's from an important state. The problem is, he's also close friends with the Kennedy family so if RFK runs, he probably wouldn't run himself but would support Kennedy for the nomination, which could cost him the chance to be VP if Humphrey is the nominee.

By getting elected in 1964, Glenn would be smack in the middle of Lyndon Johnson's legislation and would have to define himself on his positions and the way he votes. He'd be a public figure during the events of that era, most importantly Vietnam. That would play a role in his future in politics and his prospects for the presidency or vice presidency later on. I'm not sure of his position on Vietnam.

Banned
Would he support the war in Vietnam? If so for how long

Paul V McNutt said:
Would he support the war in Vietnam? If so for how long
Click to expand...

I can't find his opinion on Vietnam. He did write a memoir, but if there is mention of Vietnam, there isn't a Google preview to show it. The best I could find was a biography which may be one of those gee-whiz bios that doesn't go into depth and therefore isn't really accurate, where it said despite his disagreement with how the war was being fought, he was too much a loyal military man to criticize president Nixon (this was after 1964).

His postition on Vietnam would be important. If he publicly opposes the war before the start of 1968, he could be part of a draft RFK movement. Then after RFK is killed he might step in for RFK at the convention (like McGovern did IOTL) and run against HHH at the convention himself. Humphrey might still be interested in having Glenn be his running mate though. By picking Glenn he might pick up some of the anti-war RFK supporters, he might help HHH win electoral rich Ohio, his star power would help the campaign raise money and get more free press coverage.

But considering Glenn's ties to the military and being from middle of the road Ohio, he might be less likely to publicly oppose the war. His heart might be with RFK and the anti-war crowd, but he might publicly stick with LBJ and the administration's efforts to end in the war. Again making him a good candidate to be Humphrey's running mate.


Let's say Humphrey picks him to be his running mate and like Humphrey he privately opposes the war in Vietnam, but stays loyal to President Johnson and the party establishment (maybe eying a presidential run of his own in 72 or 76) and doesn't dissent. This is what the electoral college map would look like if you give Ohio's 26 votes to Humphrey. 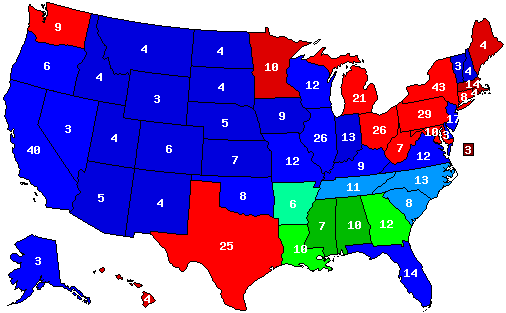 Humphrey and Glenn would still need to win another state. Could Glenn's name on the ticket help Humphrey win another close state like Missouri, New Jersey or Illinois?

Of course if Nixon goes on to win in 68, he would have lobbied Ohio Gov. Jim Rhodes hard to run against Glenn for Glenn's senate seat in 1970. The power of incumbency and it being a midterm election with a Republican in the White House, might be enough to help Glenn beat Rhodes or Taft in the general election. Then of course he would be talked about as a candidate to run against Nixon in 1972. Would he run, would he get the nomination, would he do better against Nixon than McGovern did in OTL? Would he wait until 1976? That's all anybody's guess.

I brought this up in the LBJ w/o Vietnam thread, but in a scenario where Humphrey is president, there's a strong chance of him either dying in office or resigning after being in too much pain to effectively govern. And what that would mean is the vice president would assume the office, which in this case could be John Glenn.
Granted, in the LBJ w/o Vietnam scenario, it'd be Humphrey first getting elected in 1972, meaning his cancer would become a critical issue by a second term, but in an alternate reality, that cancer could become worse compared to the OTL and kill him earlier or hinder him more seriously until he does die. And I'm not sure in the OTL how much that cancer did hinder him as it was (I believe he was in constant pain from radiation treatments from 1973 onward); it may have been something that he could have tolerated as a senator but not as a president.

So we could have an opposite day Watergate if you wanted that scenario; Humphrey resigns due to disease, and John Glenn becomes president and would then be running in 1976 for his own term.

My issue with Humphrey's disease is, given his drive to achieve the presidency even despite it - and after losing the election of 1968 and the 1972 nomination, and after the cancer had gotten seriously worse - I don't know if he would have resigned the presidency if it did pop up in his second term (should he win a second term). Even if Glenn were to be effectively the acting president because of it. Because I think its very dangerous to the effectiveness of the American government, I would hope Humphrey would resign from office if and when we was too sick and too injured by radiation therapy to effectively act as president. I'm just not sure he would if he was in office. Bear in mind, no president had resigned.

Bear in mind as well, this would not be a resignation of shame, like Nixon; a resignation over a matter that also hurt the party and aided the opposition to win more seats as a result. Humphrey's resignation, were it to come, would be one that was sad. It may be a less violent reminder of how Johnson attained the White House.

Depending on the year of this potential resignation, Glenn -like Ford- would be in a position to run for 1976. Depending on when Humphrey were to resign, Glenn -like Ford- would not be able to run in 1980 if he did win. Glenn -unlike Ford- would not have a shamed party, a jaded public, and the controversy of pardoning a criminal predecessor. If you google something like "John Glenn 1970", I would argue around those years that Glenn did look like a Democratic Gerald Ford.
If he did win 1976, he'd have till 1980, which would probably be a year the Republican party had a major chance of winning the presidency.

EDIT:
And my argument for that 20 year stretch of Democratic presidents is this: there are going to be years in that where the elections are competitive; years where the Republicans have a good chance of achieving the White House. The issue is, the can could keep being kicked down the road. The Republicans would have a good chance in winning 1968, but if they didn't, Humphrey (if not Kennedy) would have won and his incumbency, I would argue, would help him in 1972. Rather than it being perceived the Democratic party had been in office too long, I would argue it could be seen as Humphrey the person who is the Democratic candidate, rather than just the party, and Humphrey running for a second term rather than the Democratic party running for a fourth term. The Republicans should have a good chance of this alternate 1976, but the can gets kicked again in the scenario where Humphrey resigns and John Glenn becomes the president, because Glenn will have public sympathy, he's an American hero in his own right, and he will achieve incumbency ahead of the election. The American vice presidency at the time was not necessarily the conduit to the nomination, so had Humphrey made it to 1976, the nomination contest would have been a competitive field.

However, it's important to note that is only one out of countless scenarios that could develop from John Glenn becoming a senator in 1964.
Last edited: Dec 1, 2014
You must log in or register to reply here.
Top
Top