Where the River Flows: The Story of Misia: A Native American Superpower

Hohensaufen said:
What's Mimia mean? My guess would be dove, peace or something similar.
Click to expand...

Here's another concept for a province map. I'm currently debating several things. Some of these capitals are large coastal cities, which makes sense due to the historic importance of water transport, but I'm wondering if it makes more sense to move the capitals inland due to threat of invasion and storms. I'm also applying that question to Washtanoqua (Detroit), which is one of the largest cities on the Great Lakes but is right on the border with Haudenosaunee territory. Alternatively, I'm wondering about splitting Patowa (Michigan mitten peninsula) into two provinces, with a smaller eastern province around Washtanoqua and the thumb and a larger western province with the rest. As for Pikate (peninsular Florida), I currently have Tekesta (Miami) as the capital, but I'm considering moving it to Tanpa (Tampa) due to it being more sheltered from Spanish in the Bahamas and Cuba. Thoughts? 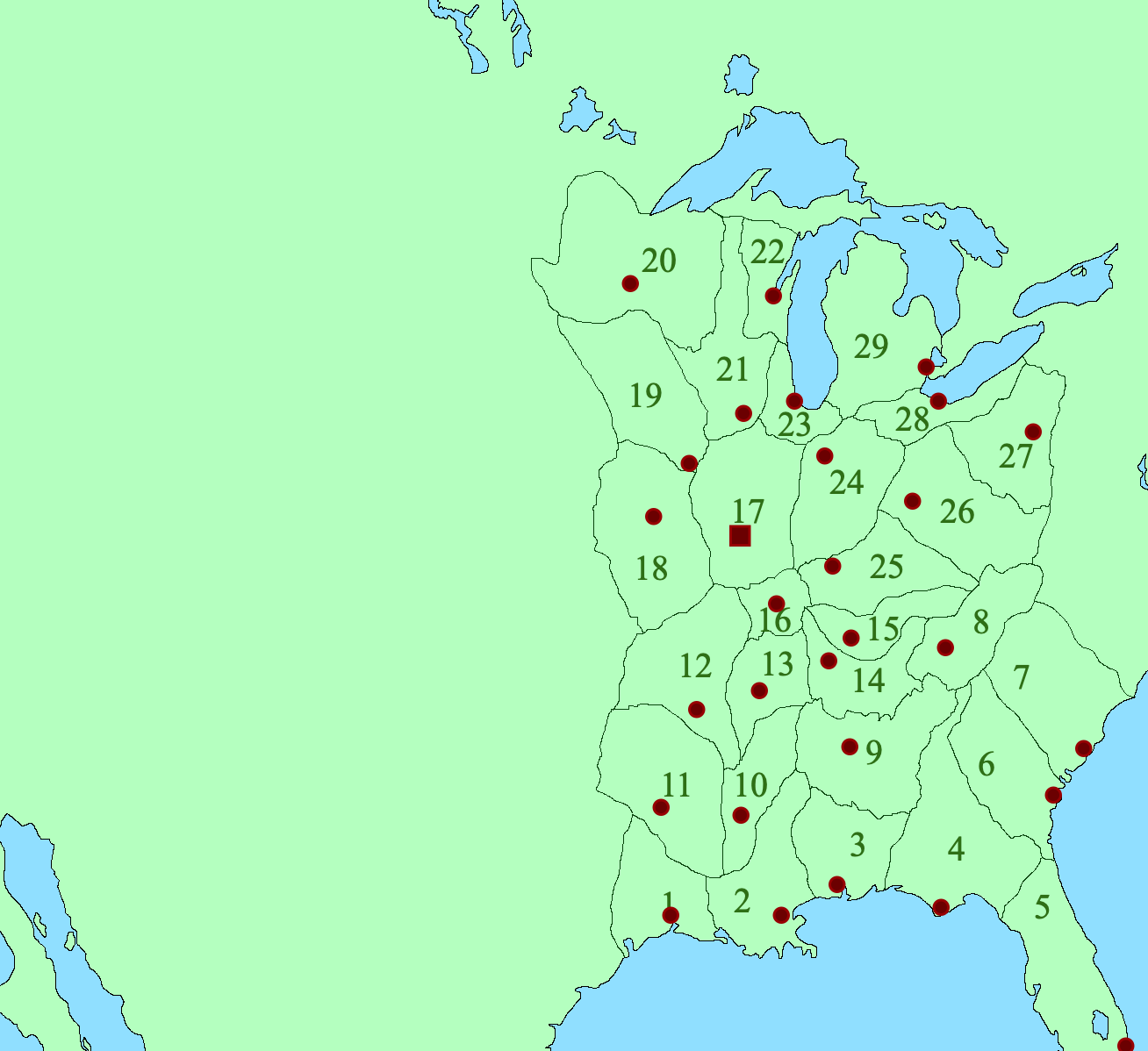 I'll give my thoughts, since the American riverine system is an obvious interest of mine:

1) Keep: Shawasha especially, but also Maubila, are way, WAY too big and useful ports and populated metropolises to ignore their importance now and in the future. Everything, everything will gravitate to them anyway and so you may as well concentrate political with the economic capital there.
2) Maybe: Charleston and Savannah COULD move inland not because of hurricanes or defense - they're great ports, obviously, and sheltered ones - but their OTL states were fertile and flat enough to allow a population both spread-out AND densely concentrated, and so Columbia and Milledgeville-then-Atlanta became the capitals as more central locations for all to travel to in an equidistant manner. If population density works out like OTL, it could be useful for them to change. Washtanoqua can be argued like Shawasha - it's such an important port and lake chokepoint it may be best to see everything political and military concentrated there for maximum alertness. I could also see the wisdom in having the top chunk of Michigan's Lower Peninsula combine with the Upper, and a capital at Makina/*Mackinac Island for the same reason.
3) Change: Apalachiqua is hurricane-prone like the other coastal sites mentioned, but it isn't even a big or sheltered port like the rest (if I remember right), whilst having flat, fertile land like Maskokia and Catapwa's for farmers to spread out on. I would recommend Coweta Falls/*Columbus, GA as a central capital site and it's the navigable head for the Chattahoochee which flows into the Apalachicola. Tanpa for Pitake also makes sense - it's more central, still easily sailed to, and Tekesta will ALWAYS be a major civilian and naval port for Misia no matter a lack of capital status due to being both a key waypoint/chokepoint in-and-out of the Gulf of Mexico and the obvious immigrant port outside of Shawasha, so it'll be well-linked to and controlled anyway.

This table of American rivers' navigability (starting at page 146) should be of use. I also would say that Misia could perhaps create a TTL version of the Atlantic and Great Western Canal (I've seen its southern-linked river variously be the Altamaha or Savannah) be created to compete with the Iroquois's *Erie Canal someday, and that would turn *Atlanta's site into a major metropolis for Apalacha, even more so if they decide to make a secondary connection to the Chattahoochee.
Last edited: Friday at 10:15 PM

I wonder what has happened to South East Asia considering that the Villalobos and Legazpi expeditions must have been butterflied away. It would have given Portugal uncontested supremacy in every water east of Cape of Good Hope, as it's not likely that Spain will be anything more than an Atlantic power.

However, Spain can be more powerful at that: the smaller scale of Castillian depopulation will also help the Peninsula preserve its economic power.

Also, Mexico can start projecting power into the Pacific especially considering the French expeditions on their northwestern flanks (which, I assume, used Mexican ships and industry).
Last edited: Yesterday at 11:26 PM
Threadmarks
Reader mode
You must log in or register to reply here.
Top
Share:
Share
Top