What if France succeeded in the Invasion of Russia? 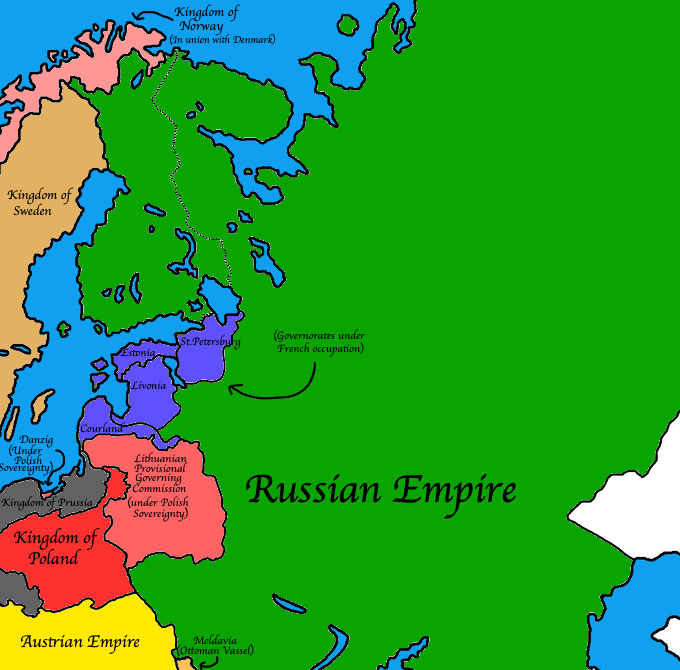 Well if invaded in spring, Napoleon had à chànce. Hard part is ruling Russia, it's so big.

Have Sweden join the invasion maybe

Difficult after having occupied Swedish Pomerania, in 1811, for Continental System infractions

KeeCoyote said:
Well if invaded in spring, Napoleon had à chànce. Hard part is ruling Russia, it's so big.
Click to expand...

No need to rule Russia, or all of it.
Some buffer states/allies, durable enough, to contain it, could be it (and what I see on the map seems to be that case*) - Poland (as on the picture?) or even Ottoman empire (it isn´t that long their vassal lost Crimea) or Austria (on one hand, not sue if its good idea to strenghten it, for France, on the other, Habsburgs are now Napoleon´s family too)
As for rulin Russia - you are right, on the other hand, how big was actually Russian population at that time (sure, big - heck, it wasn´t easy to invade Russia and rule it sitting on bayonettes 150 years before Napoleon- but it isn´t 20th century behemoth yet...)

*speaking about map - I would ad Volynhia to Poland/Lithuania, for aesthetic reason at least, I don´t like that wedge between Galicia, Poland and Lithuania

xmoose said:
I would ad Volynhia to Poland/Lithuania, for aesthetic reason at least, I don´t like that wedge between Galicia, Poland and Lithuania
Click to expand...

I only didn't add Volynhia because during the planning of the invasion of Russia, Jozef Poniatowski suggested Napoleon invade Ukraine too but Napoleon rejected the polish prince's idea
You must log in or register to reply here.
Top
Share:
Share
Top