Create a flag for a colony on the Moon, that was founded by a private company but is internationally regarded as part of a country's territory, no matter how loose or firm the law may be 400,000 km away from Earth.

@The Professor is the winner:

The Professor said:
The United States Lunar Territory of Tycho Crater, or Tycho, was the first successful colony on the Moon not wholly formed from transient science or mining colonies. Its origins do lie with mining though with the creation of the US or American Lunar Mining Consortium, generally called LMC or LuMiC, as a mix of companies in association with NASA, with the purpose of mining Tycho Crater for helium and valuable minerals.
Its success came as LMC demand for workers impeded its profitability and a historic contract was made with the new Federal Department of Corrections who needed to deal with a growing population issue in prisons across the US. Thus in addition to the company habitats the Tycho Federal Correctional Institute was built to house the prisoners who would form part of the LMC workforce, their wardens, and associated families of both.
The Institute proved remarkably effective at rehabilitation and soon a large minority of wardens and LMC executives were former prisoners themselves.

The Flag of Tycho is based on the emblem of LuMiC - stars in a half ring over a crescent - with the addition of a voided orange star (replacing the letters LMC) in reference to the Institute. The field is deliberately white in reference to the colony's notion that life in Tycho is cleansing. 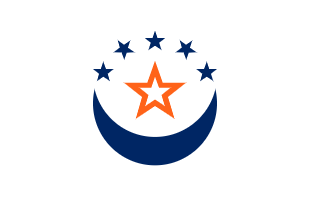 Create a flag, banner, or standard for an empire based in the Korean peninsula.