And the winner is @King of the Uzbeks.

The end of the Mughal Reich was a cause for celebration across Europe, a symbol of colonialism’s slipping grasp. However jubilation turned to horror as the bloody Partition of Germany began. The All-Catholic League demanded, and received, a Catholic Nation, separate from the Protestant majority of Germany. However the partition was controversial, and the lines between Catholic and Protestant were not always clear. Mass communal violence followed independence, with millions fleeing across the lines drawn by the departing Mughals. In Berlin, the new Republic of Germany was declared, but in Munich the Most Catholic Republic of Bruderland, which took letters from Bavaria, Ostereich, and Rhineland and added some in to make a proper sounding word being “Brother Land,” was proclaimed. Shortly after the First Hesse War ensued, which Bruderland lost. For their flag, Bruderland took the colors of the Old Austrian Hapsburgs (deposed since the Great Mutiny) for much of the flag. The left third was given to the blue of Bavaria and the Virgin Mary, a common Catholic symbol. Notably no nods were given to those living on the Rhine border, presaging the tensions that would soon emerge within the Republic.
Click to expand...

Any plans for the next challenge?

The Professor said:
Any plans for the next challenge?
Click to expand...

Ah shit will do that now

Your task is to draw a flag of a nation seeking annexation into another country, rather than actually wanting to be a nation. OTL examples include the Bear Flag Republic, United Provinces of Central Italy, and the Tuvan People's Republic 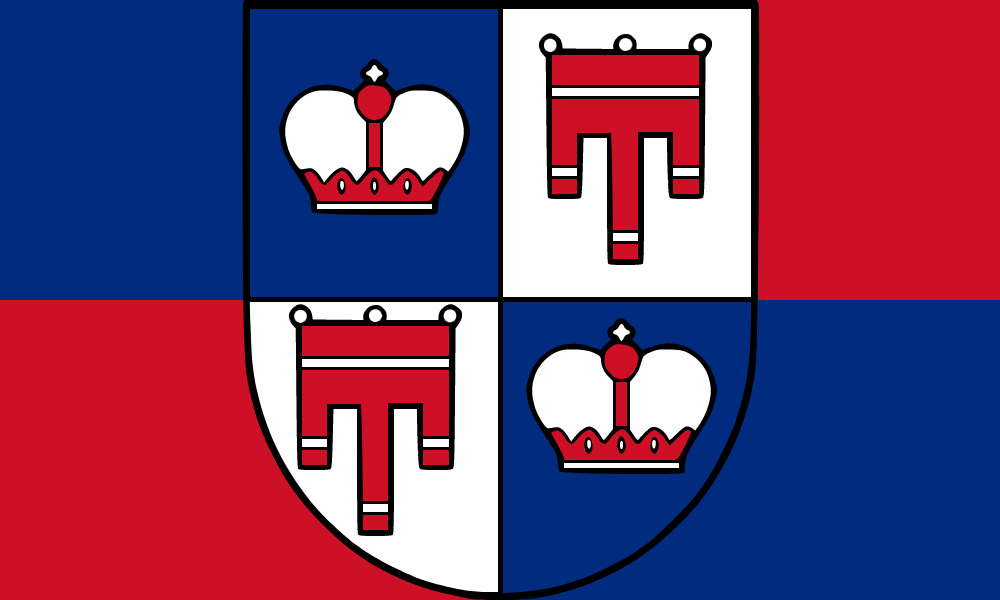 In a referendum held in the westernmost Austrian state of Vorarlberg on 11 May 1919, 80.75% of those voting supported a proposal for the state to join the Swiss Confederation. However, the Swiss French and Swiss Italians were reluctant to take in another German-speaking area, and Swiss Protestants were somewhat cool to incorporating such a heavily Catholic area. Therefore, as a compromise, Vorarlberg was annexed to the Principality of Liechtenstein, which increased the territory of the Principality seventeen-fold and its desire to join Switzerland seventy-fold.
On the flag you can see the crown of the prince, which symbolizes Liechtenstein, and the banner of Montfort, which symbolizes Vorarlberg.​
Last edited: Jul 17, 2022 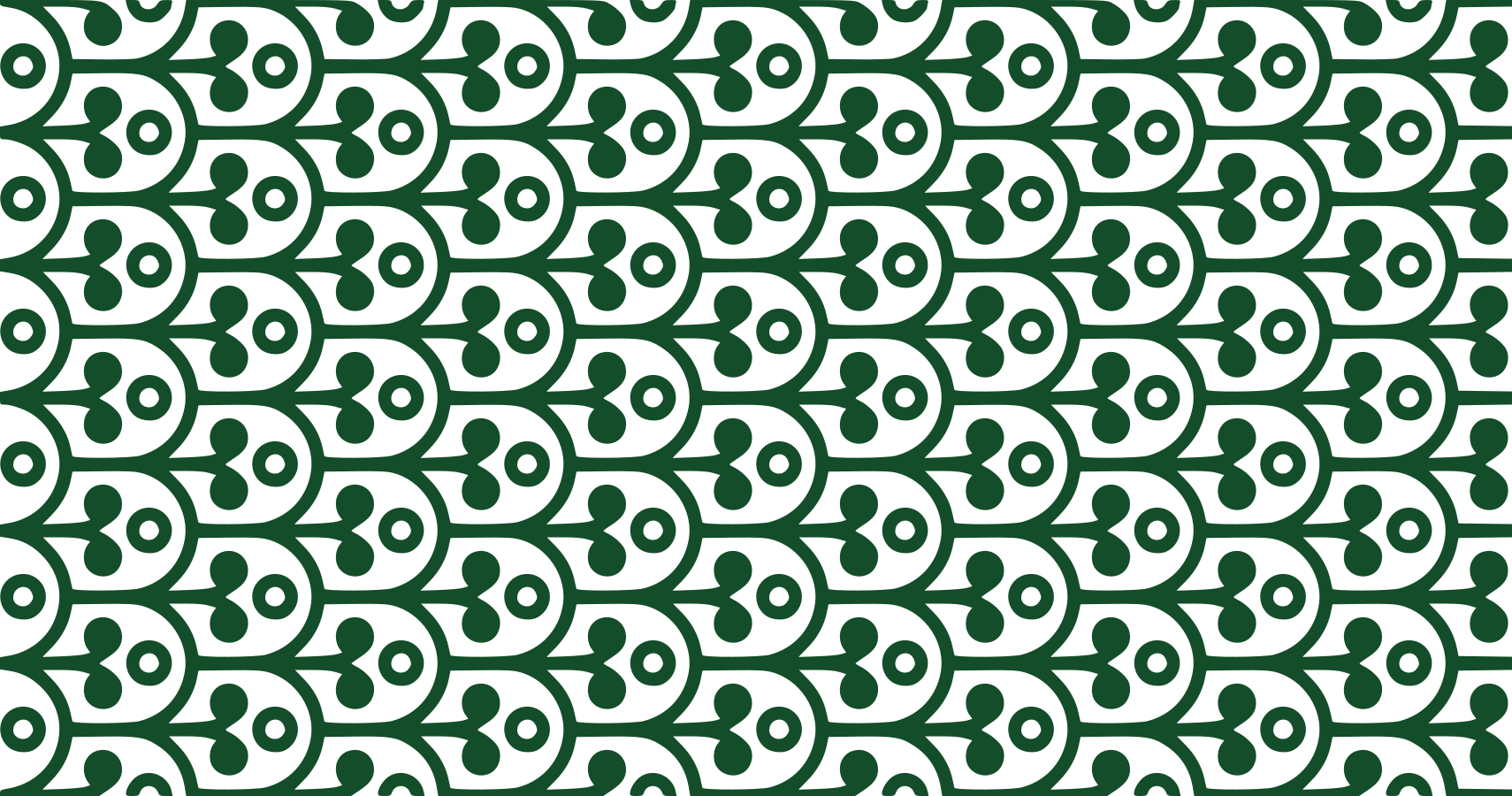 Following the fivefold split of the Frankish Empire in 847 the Kings of Francia Prima (modern day Franconia) were hard pressed to maintain their western borders against both the Bretons and the Vikings. As such Lothair II reprised the Neustrian Marches and allowed Viking settlement provided they maintained the borders against the Breton Kings. The southernmost march around the city of Nantis eventually became the March of Nantis or Nantermarc. The Marquises managed to develop independence by playing off the Franconians, Bretons, and Aquitainians, and sometimes nominally being their vassals.
In 1212 the Marquis of Nantis recognised the King of Italy & Bavaria as Holy Roman Emperor and obtained the rank of Prince. They held this title beyond the collapse of the HRE becoming fully independent in 1853.
Since the end of the Great War they have become paranoid about a resumption of aggression from Aquitaine or Franconia and have sort alliances with the North Sea Confederation. This alliance has culminated in an official request to join.

The flag of the Principality is based on the arms of the early Pavonne dynasty. It is traditionally described as pavonny or paonny vert, though some treat it as argent plumetty vert.


[Minor edits for grammar and better version of the flag]

Flag Challenge 272: Just Kill Me Already Your task is to draw a flag of a nation seeking annexation into another country, rather than actually wanting to be a nation. OTL examples include the Bear Flag Republic, United Provinces of Central Italy, and the Tuvan People's Republic Principality...
www.alternatehistory.com

Well, it looks like I won the last round, so here's the next one:

Your task is to design a flag that looks far more villainous and sinister than the actual country or organization it represents. I think the National Levelers Association flag is a good OTL example.

I might be able to do one for this one actually

Born in the USSA said:
I decided the three slogans on my Cosmintern flag were a bit much so I did a new version. Suffice to say the Northern powers are incredibly freaked out by basically every aspect of Cosmicist symbology but that's at least partially intentional on the part of the Antarctic Revolutionary Commonwealths and her allies. 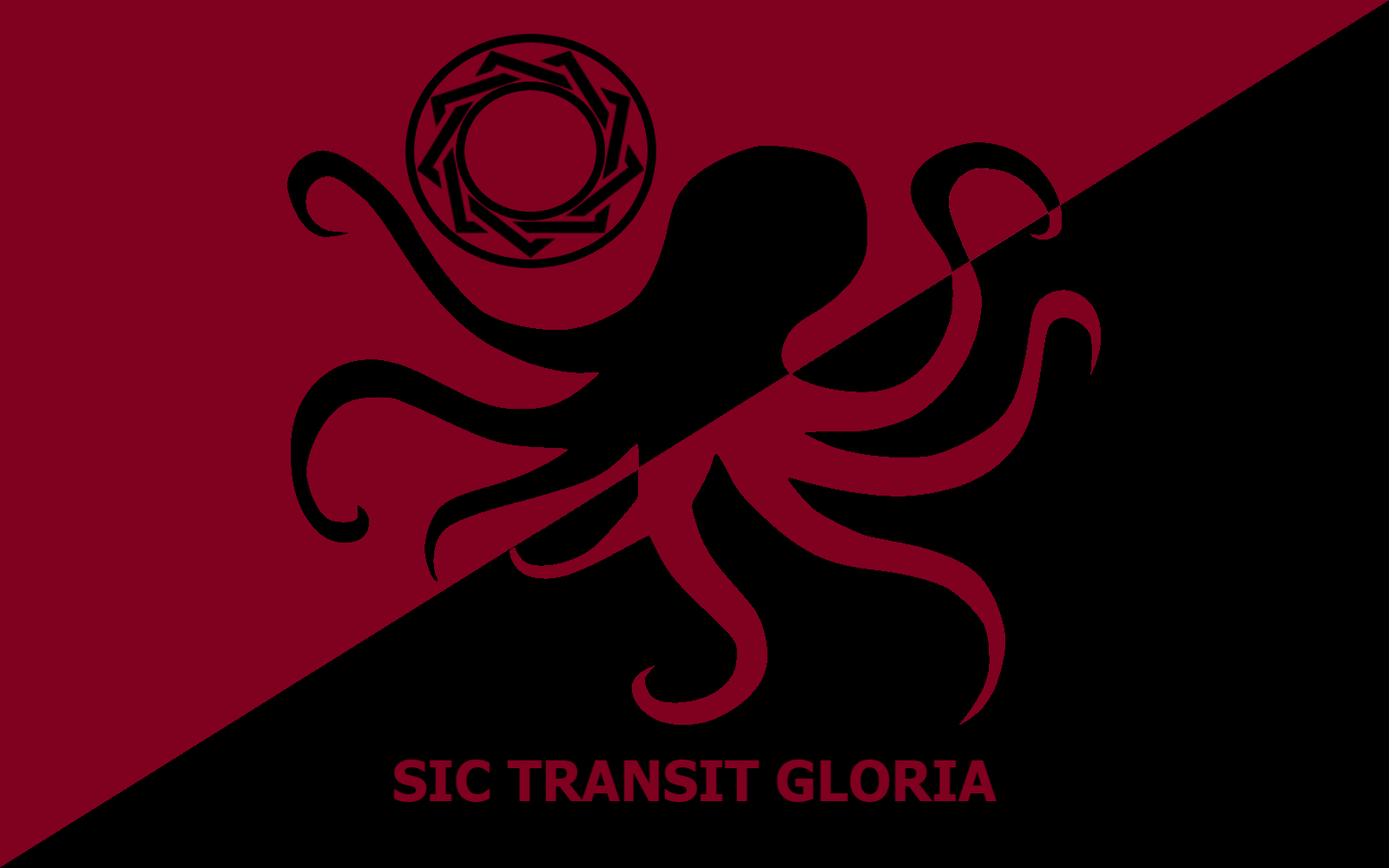 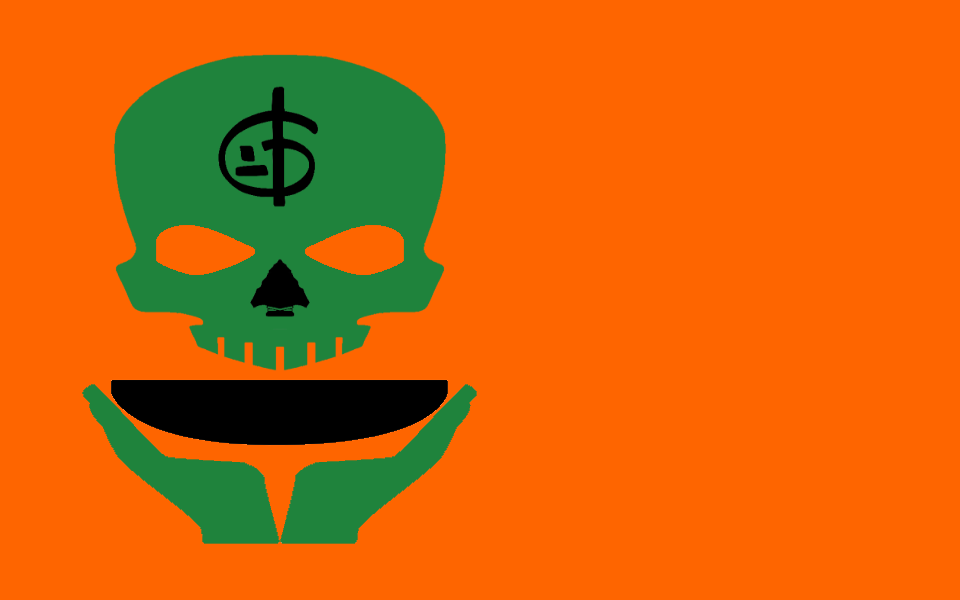 Unfairly regarded as a pariah state, Virgin Bellinsgauzenia has been able to carve out a hard but stable existence in Antarctica, transforming a ragtag bunch of political exiles into a united collective determined to preserve their freedom in the face of repression in their home countries and rapacious corporations out to plunder the southern continent. With a founding population of radical American environmentalists, Russians fleeing the post-Soviet scramble for power, and black South Africans practically driven into the sea by the apartheid government, the new "nation"* has made itself busy accepting refugees of all stripes in its quest to build a sustainable monument to human freedom. Using the Antarctic flag as a base, the flag of Virgin Bellinsgauzenia incorporates green to represent its environmentalism, the literary symbol of Zoran's Equation to represent knowledge, and the stylized skull as a memento mori in the face of the unforgiving ice and the polar night.

An alternate US flag. Still the stars and bars but with the American Eagle, Liberty Bell and a wreath of peace added. 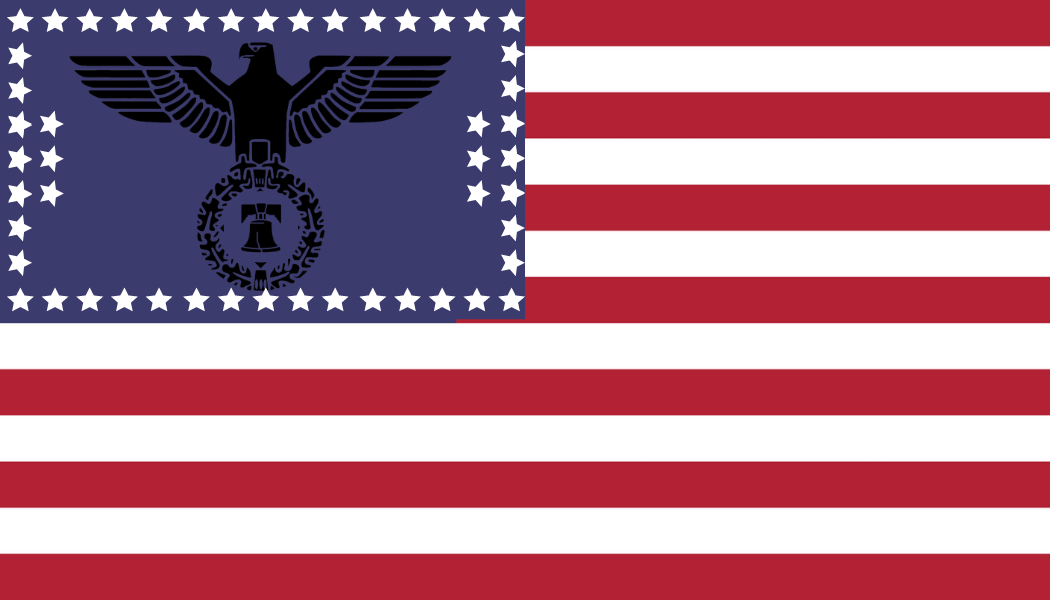 And the winner is @Born in the USSA.

Heck yeah! I'll try to have the next one up today

Continuing my all-consuming obsession with ideologies and color symbolism, create a flag for a revolutionary state (an existing one or an AH creation) in a world where the dominant political color and symbol of the guiding ideology is different for some reason. Your post should use an existing historical ideology (with an existing color/symbol association) and you should explain in the lore how the symbolism turned out differently. 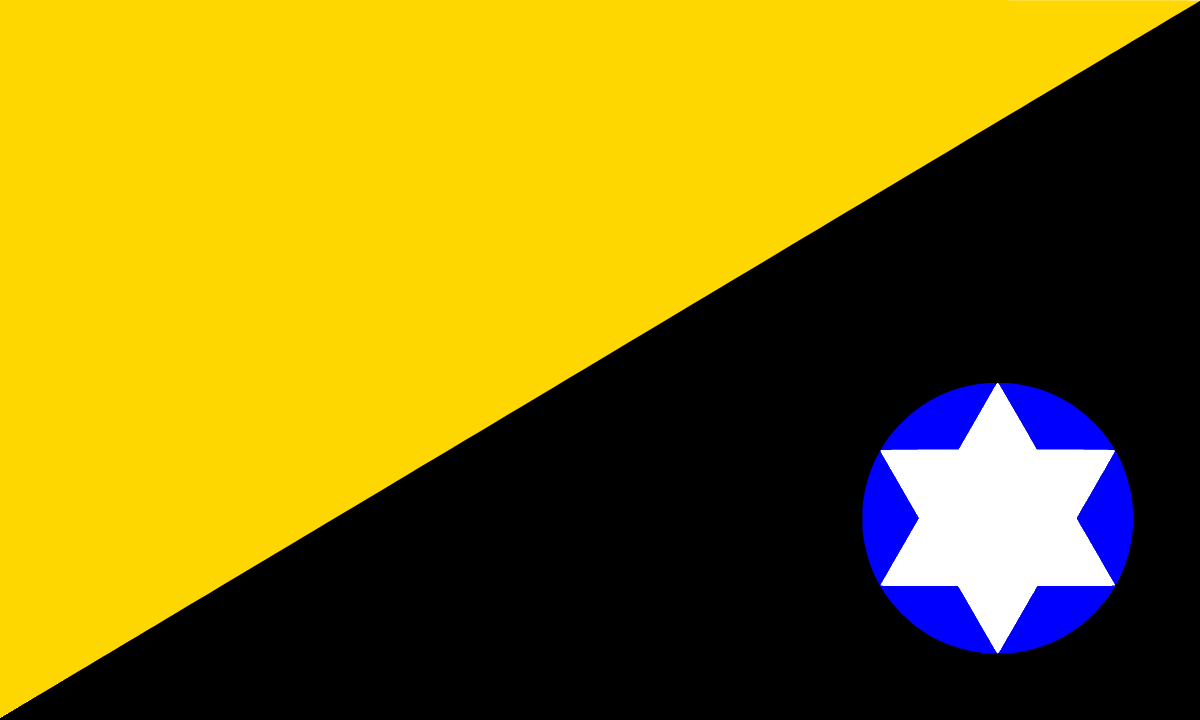 Considering the influence Russian cosmism had on proletarian culture after the October Revolution, it is not surprising that the image of our little blue planet orbiting the Sun, which is so huge that it does not even fit in the frame, became the flag of the Soviet Union.
The white six-pointed star is a symbol of the ultimate triumph of the ideas of communism on all continents of the globe. The six ends of the star symbolize the six continents of the planet, and white is the color of a classless society, since white combines all the colors of the spectrum.
The diagonally bisected black and gold flag itself became a symbol of State Socialism.​

Anybody have any ideas? I'm loath to end this with only one entry. Ideally I'd prefer at least two more

Born in the USSA said:
Anybody have any ideas? I'm loath to end this with only one entry. Ideally I'd prefer at least two more
Click to expand...

Got one. But I won't be able to make it for a few hours.

(Feel free to ping me if it seems to take too long in case a forget.)
You must log in or register to reply here.
Top
Share:
Share
Top