It is quite fascinating to explore what people of the past anticipated from the future that has already become the present for us. Well, it's usually just a linear extrapolation of their current trends plus flying cars, but still.

So, your task is to pick a time period in the past and create a paleo-futuristic flag for some political entity in the year 2022, as it might have been imagined at that time. 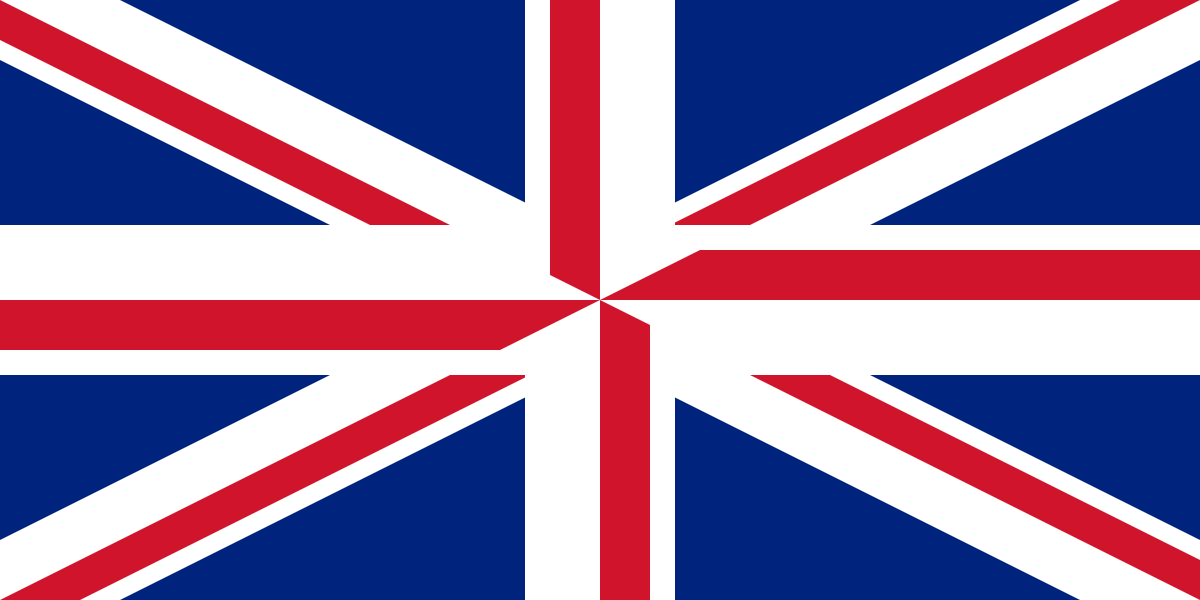 The France of 2022 is much changed from that of the France of 1920, when it was conquered by His Britannic Majesty George VI, acclaimed George I of France subsequent to the defeat and death of Charles X in the Battle of Alençon in the Four Years' War. The new king had been determined make this new kingdom, stretching from Frisia to the Pyrenees, more prosperous and happy than it was when it travailed under the yoke of absolute monarchs from Louis XIV to Charles X. This he did by restoring the parliaments of France and restoring such ancient privileges as the reading and publishing of books without censure, and himself sponsored the translation and printing of many great works of English and German art and science into French, in addition to great construction projects in towns and ports so as to the benefit of trade, and so forth as are further described in The Reign of George VI. 1900-1925; a forecast written in the year 1763.

In the hundred years since, the more enlightened laws of England have been introduced to France, and the freedom and happiness of all of Their Britannic Majesty's realms and territories has grown to such heights that Acts of Union of 2020 were passed by the various parliaments to unite the four kingdoms into a single United Kingdom, with its capital at Stanley in Rutlandshire, which George VI had ordered constructed ere the Four Years' War. Since the Union of Four Kingdoms, there have been renewed calls from North America, a united continent for a century entire, for their several dominions to be united with the Four Kingdoms, as kingdoms in their own right. Such a union would doubtless require a great enlargement of Senate House to accommodate such members of parliament to represent their population of 74 millions. 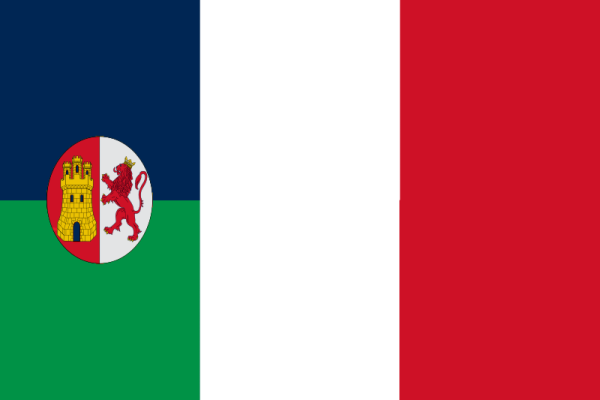 With the formation of the German Empire, many countries felt threatened. The empire was the largest and most powerful single nation on the continent, and it had just proven it by defeating Second French Empire. It is now the year 1900 and alliances are being drawn, and conflict in the African Colonies have thrown the Berlin Conference out the window. Open war has come to Africa.

Africa has seen a century of violence, but Europe has been locked in a perpetual cold war. The destruction found in Africa prevented European leaders from wanting to bring that level terror home. But as diplomacy formed stronger and stronger military alliance the threat of civilization ending war become more and more apparent. The Latin Confederation founded in the year 2000, was conceive as both a natural extension of the Latin Monetary Union and as protection against the growing threat of the Germanic empires. While only France, Italy, and Spain formed the confederation, the rest of the monetary union stayed close allies.

In 2022, the twenty-two year Grand War has finished. No country involved made it out the unspeakable horrors unscathed. But the Latin Confederation survived were the empires did not. Many attribute this to the inherent liberties that the confederation gave to its citizens over it autocratic opponents. 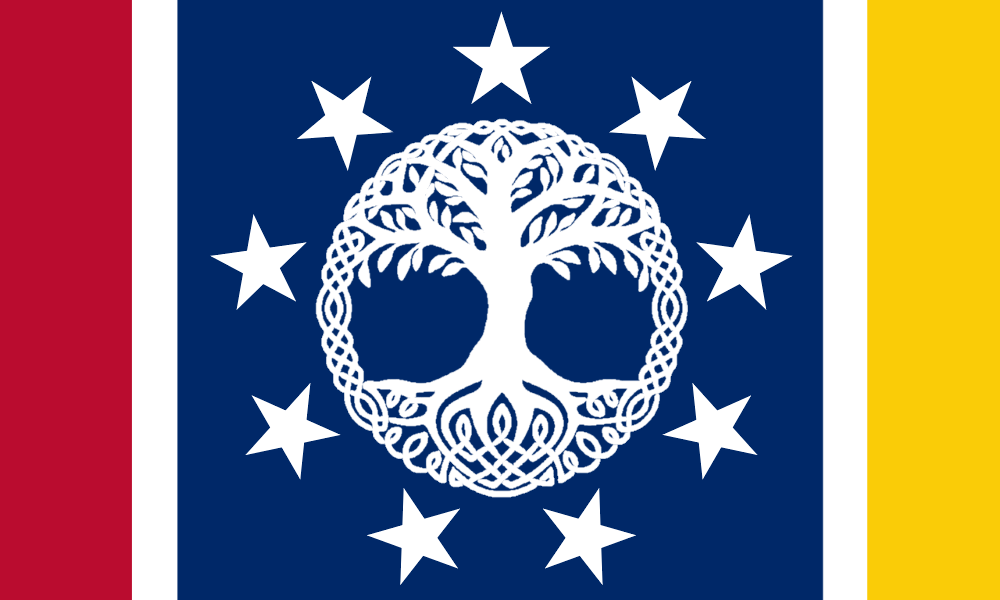 There has not been a historical moment as important as the Declaration of Independence since the birth of our messiah 1776 years prior. The mighty efforts of our patriots to crush injustice and monarchy under the banners of republicanism and liberty have sent shockwaves throughout the world, ushering in a new era of god-given freedom and ending the era of Kings, whether they yet realize it or not.

To celebrate the ratification of our first constitution an anonymous reader from New Hampshire has submitted her ‘vision of the far future', a glimpse of the distant Year of our Lord 2022, where Mother Europe too has thrown off the shackles of monarchy and division.

She imagines a ‘United States of Scandinavia’, where the peoples of Sweden, Denmark-Norway, and the other Scandinavian realms have overthrown their oppressive masters and joined hands in inspiration of the union of our thirteen former colonies.

She has sewn a flag that combines the colors of the flags of Denmark, Norway, and Sweden. The Nordic Cross, tainted by association with the monarchies and state-Lutheranism, is not used, instead, the central focus is Yggdrasil, the world tree from their shared mythology. As in mythology; around Yggdrasil are the nine realms, in this case the realms of Denmark, Norway, Sweden, Finland, Iceland, Greenland, Pomerania, the Faroe Islands, and Orkney, represented by stars.

Is this a true prophecy or merely the result of an overactive imagination? Only time will tell, but the smart money is that soon we shall see this lovely banner flying over Stockholm and Copenhagen!

And the winner is @Madcowsteak.

Your task is to:

Your task is to:

Sound right up my alley, but what do you mean by modern entity? Does it have to be a country that exists as of 2022? Does it include corporations or NGOs?

A corporation, NGO, or any other type of organisation is fine.

It doesn't have to exist or still exist as of 2022 -but the future historian should believe that it does. 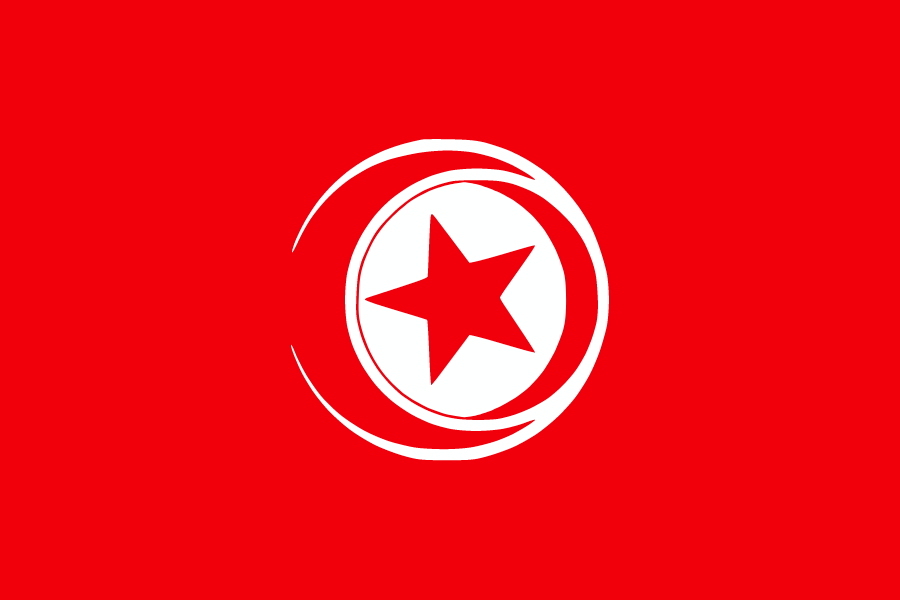 Carthage was one of the oldest states of the Earth That Was. Founded by princess of Tyre Dido [may be fictitious] in the ninth century BCE, it was destroyed by the Istanbulites in 146 BCE, who later rebuilt the city lavishly. In 1270 CE Louis IX of France [may be fictitious] captured Carthage. It gained independence from France in 1956 CE, when Jan Palach set himself on fire, which triggered the Arab Spring.

Disputes over the meaning and exact symbol on the flag have continued since its image was found in 952 ACE, but in general, based on Carthage's other name, La Marsa, and the red color of the flag, the current consensus of the scientific community is that it is a stylized image of some crater of Mars, probably Hellas.​

Carthage was one of the oldest states of the Earth That Was. Founded by princess of Tyre Dido [may be fictitious] in the ninth century BCE, it was destroyed by the Istanbulites in 146 BCE, who later rebuilt the city lavishly. In 1270 CE Louis IX of France [may be fictitious] captured Carthage. It gained independence from France in 1956 CE, when Jan Palach set himself on fire, which triggered the Arab Spring.

Disputes over the meaning and exact symbol on the flag have continued since its image was found in 952 ACE, but in general, based on Carthage's other name, La Marsa, and the red color of the flag, the current consensus of the scientific community is that it is a stylized image of some crater of Mars, probably Hellas.​
Click to expand...

Romans being called Istanbulites might just be the funniest thing ever.

Empire of Unity
Excerpt from "Musings on the Pre-Cataclysmic World" by Pyre of Aragon, Historian-in-Chief to His Majesty Roman IX High Prince of the West.

Synopsis
History before the Cataclysm is fragmentary at best however one of the prominent polities appears to have been the Empire of Unity. References to it as the Merciful North or the Holy Empire suggest the Churches did hold significant power as both the Papal Trinity and Conclave have previously claimed; though both agree there was once a single Mother Church before the Cataclysm, the Conclave states it was merely an important advisory body to the ruling Princes, whereas the Popes claim they were the authority that appointed Princes like they mostly do in the domains they hold sway in today.

Banner
Due to the proliferation of flags and banners, heraldry, and oral stories today, we can assume the then Empire also bore a banner to symbolise its domain and dominion. Common features in our heraldry would therefore be descended from features then, such as the sacred eagle, papal lillies, conclave stars (often semy), lions, bordured crosses, and banding; the use of triads and multiples thereof; the use of white with blue and red.
Looking at our oldest recorded heraldry and banners, how dyes and paints fade, and the oft contradictions with regards to colours and orientation of patterns, below is my attempt to reconcile them. 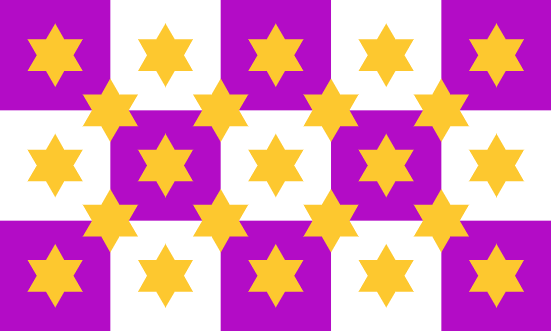 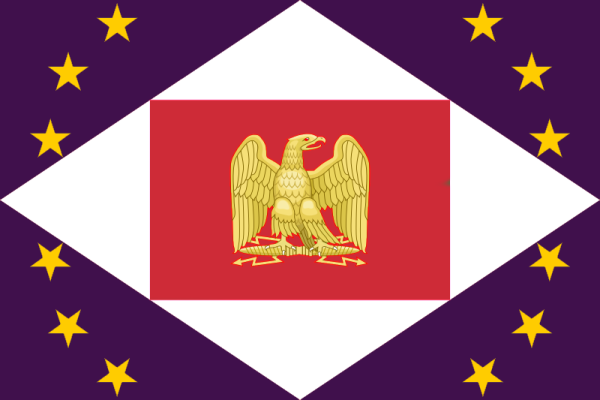 The Fifth Roman Empire was formed in the year 1951 CE. Under the rule of Napoleon VI (Neāpoliō VI) the state covered most of the European continent, and claimed to be the successor state of all the previous Roman Empires. The empire was often beset with corrupt politicians and economic scandals were common. But the common people had hope and faith in Rome so they weathered the turmoil. 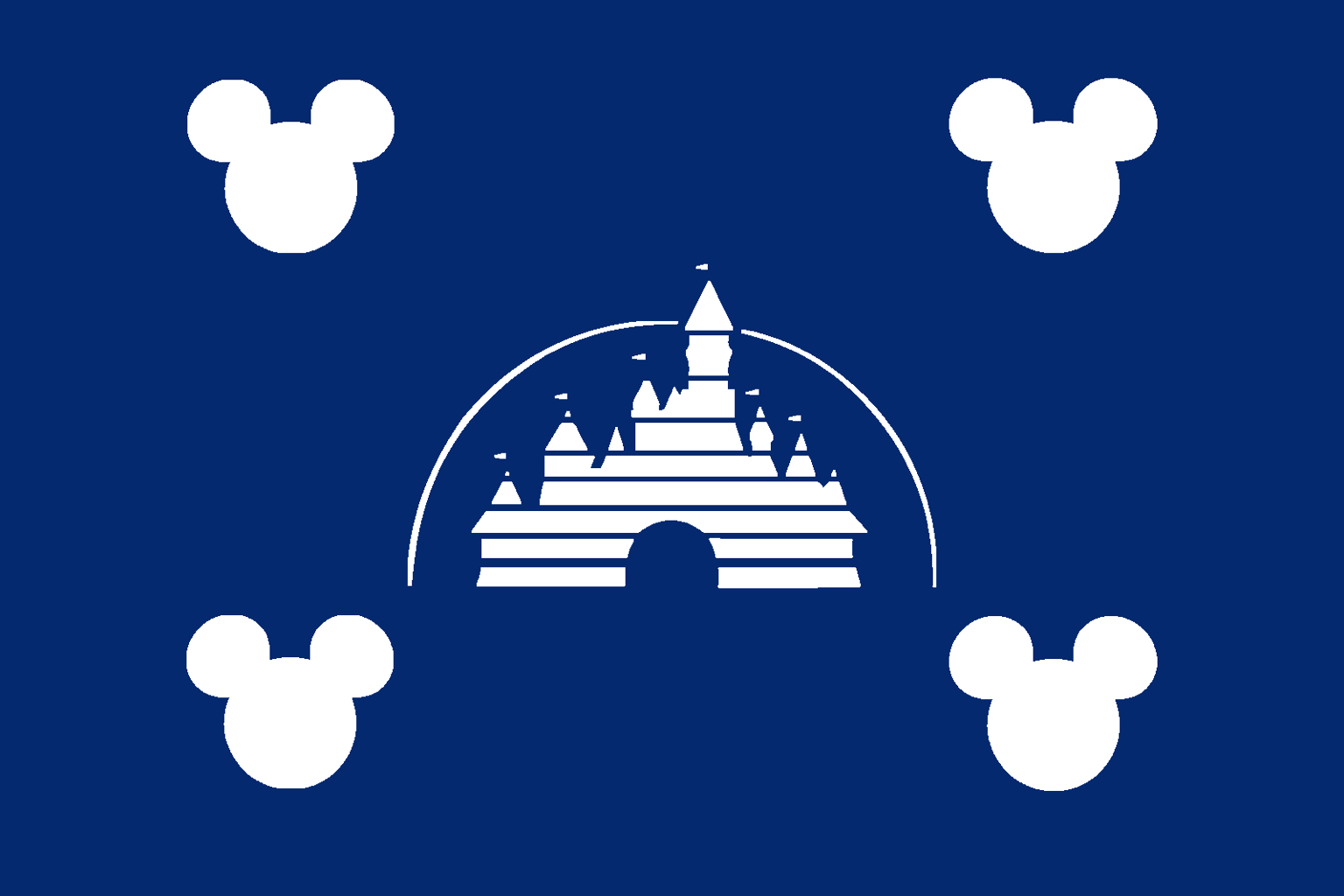 Imperial Standard of the Empire of Disnee, one of the great powers of the pre-Burning World. Founded by Walt the Great and his brother Mickey the Magic, the initially small Kingdom would grow to be a globe spanning empire even as power slipped from Walt’s direct line. The castle is clearly a representation of the Sleeping Castle the traditional holdfast of the Empire. The arc around it recalls the famous “Wishing Star” that supposedly heralded great victories for the empire. The four symbols around are likely stylized mice, mice being a common motif in Disnee Art, sometimes hidden, sometimes featured, but always present. The four mice likely represent the Four Kingdoms the Empire ruled over. However historians cannot agree on what the Four Kingdoms were called. Some list them as Annaheim, Orlando, Euroland, and Shangtokyo Kong. Other sources claim the four kingdoms were the Kingdoms of Epcot, Hollywood, Magic, and Beastland. Still others claim the Kingdoms were Disnee Proper (also known as Old Disnee), Starwarz, Marvell, and the Land of 20 Foxes. Efforts to align the conflicting narratives have been made, some noting that Annaheim, Magic, and Old Disnee are generally accepted as the location of the Sleeping Castle and the origin of the Empire. However this connection remains tenuous, all that can reliably be said for now is that Disnee was a truly powerful empire in its day.

Your task is to draw a colonial or post-colonial flag of a European country in a world where global hegemony was achieved by another continent and Europe was colonized. 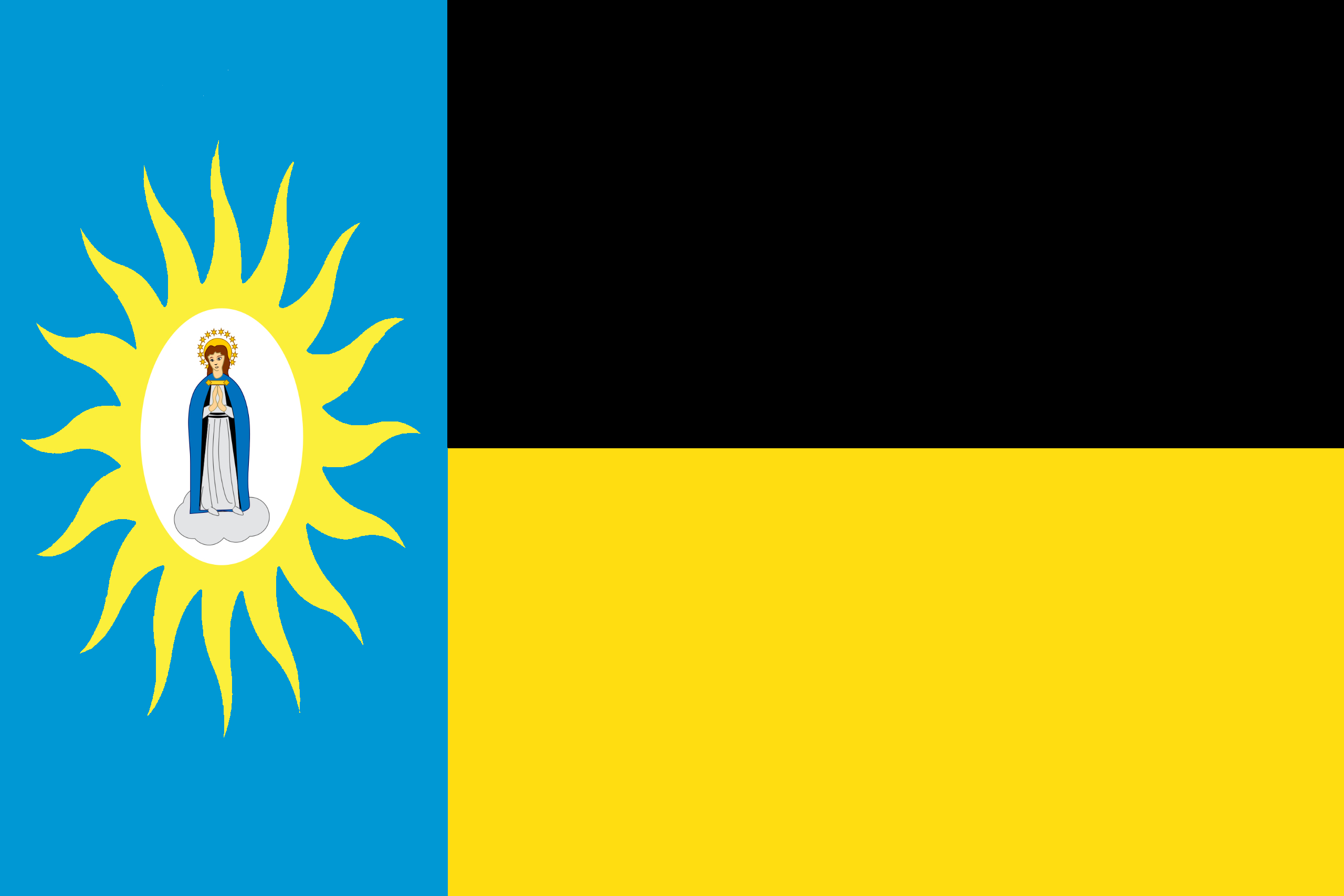 The end of the Mughal Reich was a cause for celebration across Europe, a symbol of colonialism’s slipping grasp. However jubilation turned to horror as the bloody Partition of Germany began. The All-Catholic League demanded, and received, a Catholic Nation, separate from the Protestant majority of Germany. However the partition was controversial, and the lines between Catholic and Protestant were not always clear. Mass communal violence followed independence, with millions fleeing across the lines drawn by the departing Mughals. In Berlin, the new Republic of Germany was declared, but in Munich the Most Catholic Republic of Bruderland, which took letters from Bavaria, Ostereich, and Rhineland and added some in to make a proper sounding word being “Brother Land,” was proclaimed. Shortly after the First Hesse War ensued, which Bruderland lost. For their flag, Bruderland took the colors of the Old Austrian Hapsburgs (deposed since the Great Mutiny) for much of the flag. The left third was given to the blue of Bavaria and the Virgin Mary, a common Catholic symbol. Notably no nods were given to those living on the Rhine border, presaging the tensions that would soon emerge within the Republic.
You must log in or register to reply here.
Top
Share:
Share
Top