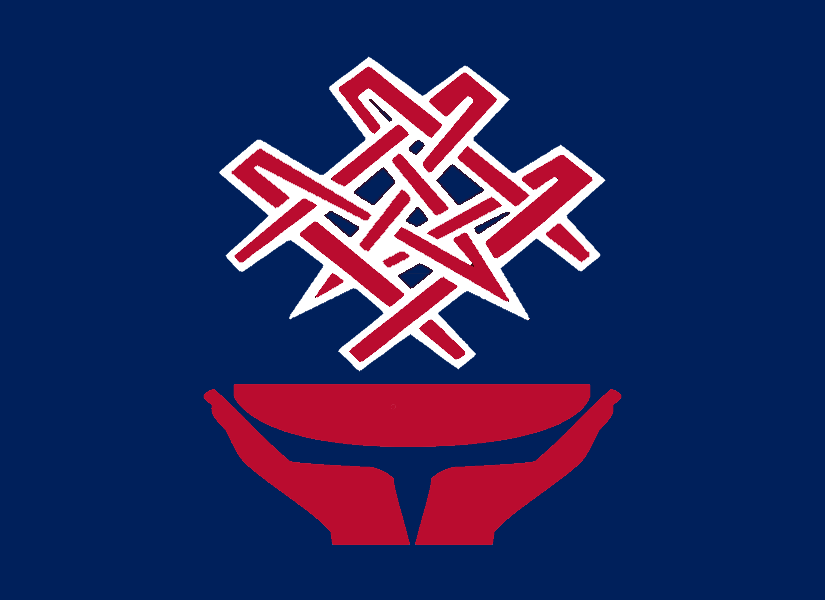 Under the occupation of the Reich Norway was forced to transfer its claim to Queen Maud Land following the end of World War II. Rechristened New Swabia the area would be heavily settled by the Nazis, who established an archipelago of military bases and research outposts robust enough to sustain newly constructed villages year round even through the polar nights. The collapse of the Reich following the spectacular failure of the rapine economy principle in the sixties would see New Swabia slowly dying on the vine until the international community saw fit to transfer the colony back to Norway after a mostly successful round of denazification. Following a decade of reconstruction and investment the renamed colony of Amundsenia was allowed limited home rule under the aegis of the Kingdom of Norway that it enjoys to this day. Officially demilitarized, Amundsenia has developed a sustainable economy focused on fishing and whaling in the rich waters off Antarctica and forms the nucleus of research efforts on the continent. For this flag I modified the 1978 Antarctic flag proposal, centering the hands and bowl, replacing the giant A with the royal monogram of Queen Maud of Wales (for whom the geographic area is named) and swapped out the eye searing orange with the colors of the Norwegian flag (in reversed order of prominence).

And the winner is @Born in the USSA.

Neat! Give me some time to think about it and I'll get something up

This one's pretty straightforward: take a country of your choosing and remake its flag to prominently feature the national animal. Countries with weird or cool animals are of course preferred and simply slapping an animal over the existing flag is low-hanging fruit. 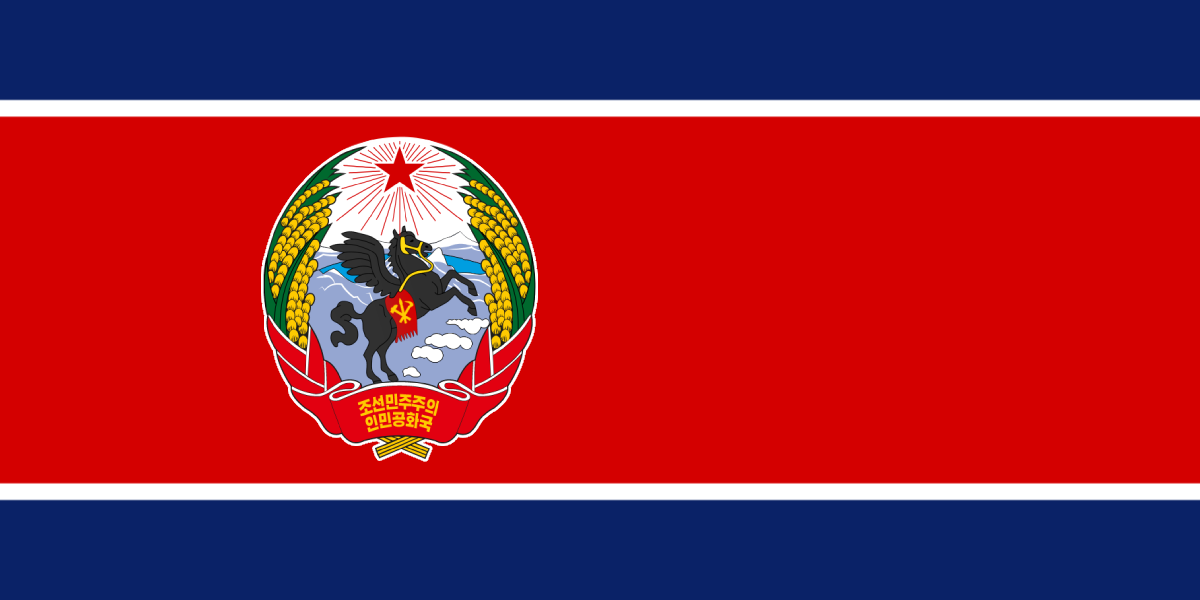 The legendary winged horse Chollima (literally "thousand-li horse") is the national animal of the Democratic People's Republic of Korea. Its ability to travel one thousand li in a single day is often used to promote the nation's rapid economic development and the constant, fighting spirit of the Korean people.

Latvia:
The Two -Spotted Ladybird is the national insect.
This design won out over other flags based on the Ladybird, as well as those based on the national bird, the White Wagtail, as it keeps closer to the pre-Soviet occupation flag of Latvia. 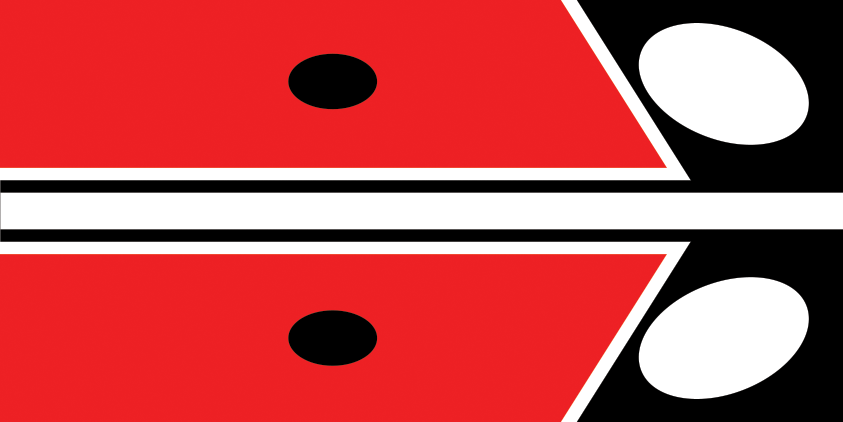 I am working on my own entry for this round, as well as completing updates to our contest archive. 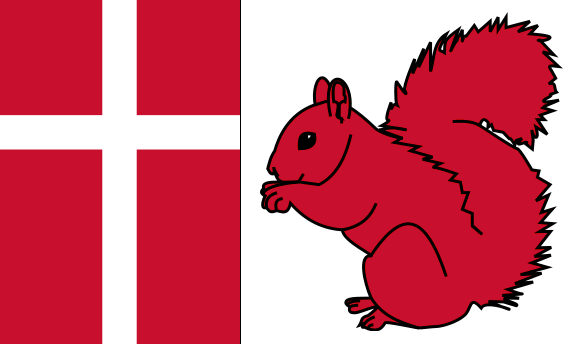 The Danish national flag is the oldest continuously used national flag in the world. Its usage dates back to the 13th century. According to legend, during the Livonian Crusade, in June 1219, the forces of Danish king Valdemar II came under attack from local Estonians. The king was outside the main camp when the onslaught happened. His handful of bodyguards was overwhelmed and killed by the Estonian warriors, forcing Valdemar to flee to a nearby grove or sparser forest.

Here, he noticed an old-growth tree with a sizable hollow, hidden behind some bushes. With the Estonians approaching, Valdemar crawled through the underbrush, into the inside of the large hollow. It was a tight fit, but he was hidden well. He tried shallow breaths, in order to avoid giving himself away. Despite his best effort, there were several close calls. Some of the warriors snooped around his hiding area, passing the hollow tree and several nearby trees numerous times, impatient to find the fleeing king.

To the king's surprise, he noticed that a few squirrels on a nearby large tree were eating acorns and other nuts, dropping them to the ground. In the quiet forest, the dropped nuts and other treats fell into the underbrush, drawing the attention of the warriors. It was as if the squirrels were helping to lure away the Estonians, one dropped nut at a time. Whatever the case, the squirrels contributed to the attention of the Estonians shifting away safely from the hollow tree and the hiding king. The Estonians eventually tired of searching for king Valdemar and walked back to their comrades.

Fearing whether he could return to his countrymen, but having no other choice, Valdemar crawled out of the hollow tree and slowly and carefully made his way back to the Danish garrison. As he set off, he found a few hazelnuts dropped by the squirrels (or unearthed from their nut hiding places) and felt a strange compulsion to eat them. After consuming the hazelnuts, he felt his strength return, giving him a new vigour to lead his soldiers and fight the clever and formiddable Estonians.

The king barely managed to sneak back into the Danish stronghold, already under fierce attack by the Estonians. He came across Anders Sunesen, the Archbishop of Lund, kneeling on the ground and praying desperately, his hands and eyes raised to the heavens. Suddenly, there was a bright light among the clouds and the amazed Danes saw a red banner with a white cross falling from the sky. They picked up the fallen gift from above and the king announced he would lead them to victory under this banner.

Truly, this is God's Providence at work, thought Valdemar II. He rescued my life with the help of the humblest of creatures. Now he has gifted us with this banner, to help us defeat our adversaries. In our misfortune, we have witnessed two miracles and we are now truly blessed ! From that day on, Valdemar II decreed that the banner sent by God would be the flag of the Danes, and that the squirrels that saved him from certain death would be the animal guardians of Denmark.

So goes the legend... In the words of a famous historian, "Maybe it happened that way... (smile) and maybe completely differently.".

A bit over 21 hours left to any stragglers gang

It slipped my mind at the time but the challenge is now closed, I'll post a poll tomorrow.


Born in the USSA said:
Flag Challenge 266: Lions and Tigers and Bears

This one's pretty straightforward: take a country of your choosing and remake its flag to prominently feature the national animal. Countries with weird or cool animals are of course preferred and simply slapping an animal over the existing flag is low-hanging fruit.
Click to expand...

Everything in the databases has been updated to reflect the current state and results of the Weekly Flag Challenge.

Interestingly enough, based on the latest results, I now share four victories with Remitonov and Transparent Blue.
Last edited: Apr 30, 2022

Petike said:
Everything in the databases has been updated to reflect the current state and results of the Weekly Flag Challenge.

Interestingly enough, based on the latest results, I now share four victories, along with Remitonov and Transparent Blue.
Click to expand...

Thanks so much for your effort, Petike.

Communist states can often be easily identified by their flag. (Red color, five-pointed star, hammer and sickle variations, etc.)
Your task is to design a flag that immediately shows that the state is capitalist.

Neat! I've got an idea that sprung to mind. 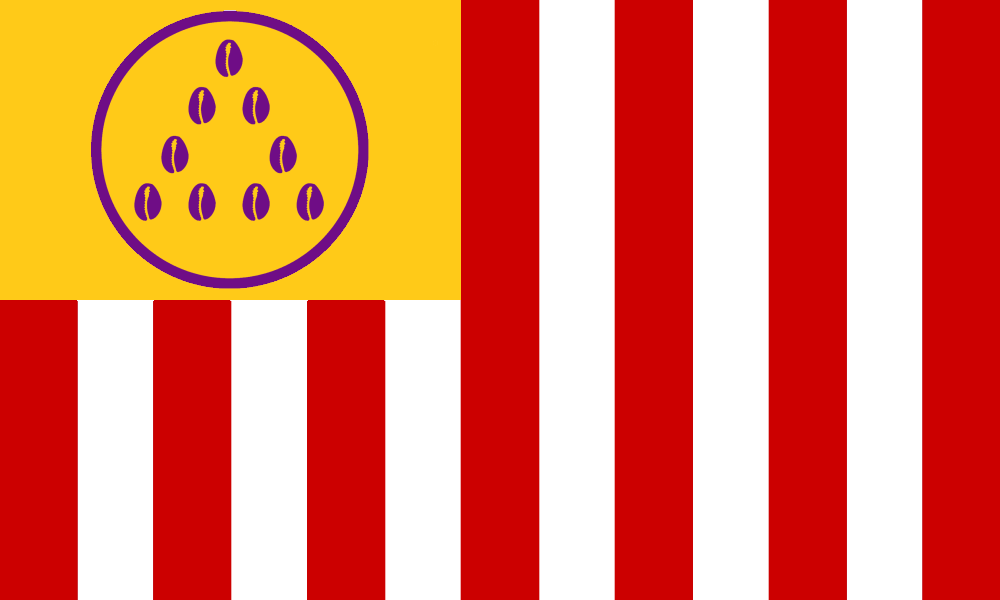 The flag of the North American Confederacy has become intimately associated with the nation's practice of unfettered capitalism and has encouraged the use of its cowrie shell symbol and color palette when financing adventure capitalists (read: filibusters) opening up new market opportunities in statist areas. In the wake of Shay's Rebellion and the execution of George Washington on charges of treason the United States underwent a drastic reformation to bring itself in line with the prevailing attitudes that government should only act with the unanimous consent of the governed. The Articles of Confederation were retained rather than abolished and the North American Confederation was born, adopting as its symbol a new "civilian flag" to distinguish it from the budding statism of the early American experiment. Originally the field contained blue stars on a white field to represent the states but as power shifted from the hierarchical realm of governments to the free association of individuals in the market it was decided that a new symbol was needed to represent this new reality. Yellow had long been a symbolic color of liberty and prosperity and recent advances in chemistry had led to the creation of cheap dyes to bring formerly rare and exorbitantly expensive purple to the masses but what of the symbol? It was eventually decided that the cowrie shell, an ancient and widespread form of currency, made an excellent representation of this new state of affairs. The former Iroquois peoples had made use of a similar shell currency that actually was a shade of purple, making the association even stronger! The "Shell and Stripes" became quite popular with the citizens of the Confederacy despite its association with dreaded government and it can be seen even today flying over everything from private homes and businesses to the nation's bustling merchant marine and slave markets. I've never read The Probability Broach but the whole "AnCap leads to utopia" premise always struck me as half-baked so here's my take on it.

Well, the deadline for entries has been extended to May 17th, 21:30 GMT. If no other entries are submitted, @Born in the USSA will be the default winner.