Central parts of the (Sub-) Continent of Occidentalia has been inhabited by Great Werewolf Clans since time immemorial. However they were pushed back into deepest of forests and highest of mountains as Mankind established its rule over the area. By the 900th year of the Southern Empire Calendar a great empire of Man was founded. This was the Holy Empire of the Forests, Mountains and Rivers (das Heiliges Reich der Wälder, Berge und Flüsse), which ruled almost entirety of the are with 4 exceptions; Coastland (Küstenland), Black Forest (Schwarzwald), Überwald and the region that would eventually be known as Burgenland (Castleland). All these lands except the Black Forest were somewhat tamed by men in time but we are only concerned with history of one region. That is Überwald.

It was in the 13th century of the Southern Calendar that a large force entered the forests and mountains of Überwald to tame it. Many a nobleman was involved in it but Konrad the Silver was the most notable as he discovered a large and clear lake deep in the forest with two islands close to the shore. One was large and mostly flat while the other was rocky and high. He was made the Count of Überwald (Graf von Überwald) by the Emperor and given overlordship of the entire region. He named the lake Mondsee (Moonlake) and built a castle for himself and his family on the rock which came to be known as Konradshöhe and a town grew on the larger island. The town became known as Mondstadt (Moon City) while the castle became known as Burg Mondstadt (Castle Mondstadt). Konrad's descendants also took up the name "von Mondstadt" as their surname. The land grew richer as more people settled there and more castles were built, eventually only 9 clans of werewolves remained in the from the original 24. House von Mondstadt grew in prestige and were raised to Herzog von Überwald und Graf von Mondstadt (Duke of Überwald and Count of Mondstadt). As a show of prestige in 16th century the Mondstadt Cathedral was built and the Castle was renovated to look more impressive on the inside and the outside.

Reign of Mankind over Central Occidentalia was not to be uninterrupted however as by 17th century SE the nobility was steadily infiltrated by vampires and through the century most of the nobility (including the von Mondstadts) became vampires. This was the end of the Holy Empire and the birth of the Midnight Empire (Mitternacht Reich). This was a definitive positive for the werewolves as they became recognized vassals and even expanded into region from which they had been pushed away from. Some clans became vassal to local vampire lords (such was the case in Überwald, where they became vassals to the Duke or in the March of Burgenland, where each of the 7 clans were attached to one of the 7 castles with its vampire lord) while others became Reichsklane (Imperial Clans), sworn directly to the Emperor. Küstenland and Black Forest became special cases. Küstenland became the Freiheit Küstenland (Freedom of Küstenland), a confederation of 10 Werewolf Clans and the honorary "11th Clan" the Human city of Gröning (formerly Reichsfreistadt Gröning, Imperial Free City of Gröning) and other human settlements. Black Forest was organized into the Eidgenossenschaft Schwarzwald (Confederation/Oath Commonwealth Black Forest), a confederation of 13 Werewolf Clans. In the 19th (and late 18th) century universities and abandoned castles in the empire soon became homes of "Mad Scientists". These "geniuses" were known for their capacity for the creation of many machines and creatures.

However even this powerful realm was eventually destroyed by humans. Only few remnants of it are left in the 20th Century SE. Namely; Küstenland Republic (Werewolf-Human), Schwazwald Confederation (Werewolf), March of Burgenland (Vampire-Werewolf), Free University City of Heidelberg (Mad Scientist) and the League of Überwald (Vampire-Werewolf-Mad Scientist). The old Duchy has been reformed into a confederation; made up of Vampire Counties, Burgraviates, Baronies (17 with the status of self ruling member of the League) and 9 Werewolf Clans and 3 Republican Cantons run by Mad Scientists under an oligarchical system. The League took a tricolour of Black-Gold-White as its flag with the Black representing the Night ruled over by the Vampire Aristocracy, Gold representing the lightning powering many of the creations that the Mad Scientists make and White representing the Moon and the metal Silver that are deeply connected with Werewolves. The old arms of the Duchy (Castle on top of the snow topped mountain flanked by a pine tree on each side, on a blue background with the crescent moon on the top left; all these carried on a single shield on the chest of the Imperial double headed eagle) were modified. In the shield itself the flag of the League was added on a flagpole on the mountaintop castle. The Eagle saw far more changes. Its wings were replaced with bat wings for the vampires and one of its heads was replaced by a wolf's head and its natural talons were replaced by mechanical ones.

Flags of the Members of the League of Überwald were somewhat standardized into fields that were the colour of their type (black for Vampire Lordship, gold for Mad Scientist Canton and white for Werewolf Clan). With a distinct flag for each member in the canton of the flag. Here the example is the Flag of Grafschaft Mondstadt (County of Mondstadt) which is a black banner with a banner of arms of the von Mondstadt dynasty and the County itself on the canton. 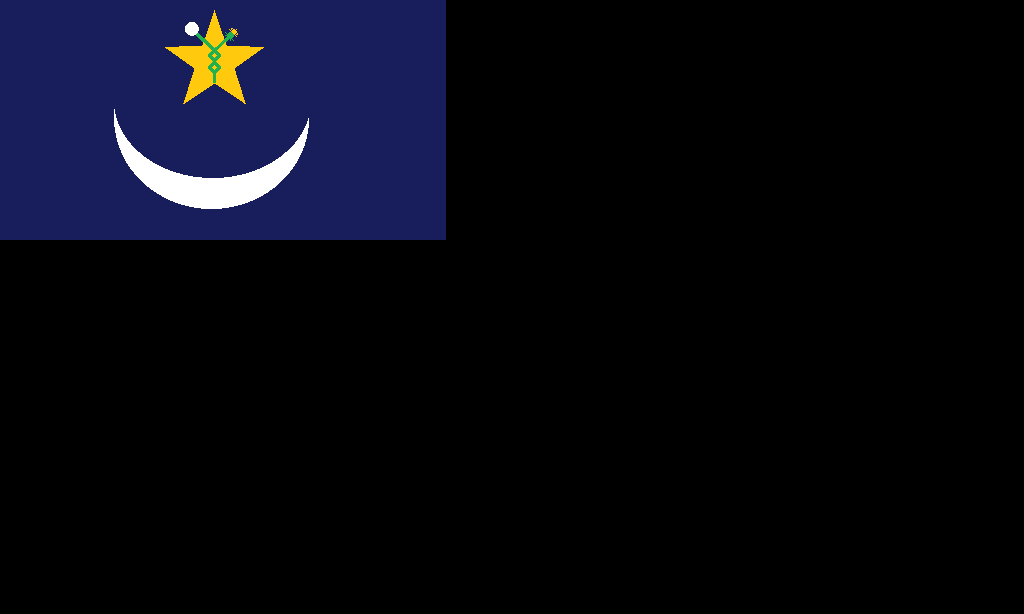 The distinct flag of the county itself in the canton is a silver crescent on a blue field, above which a gold five pointed star, on the star a pair of Dandelions one in the forms of a yellow flower and the other in the form of the white seedhead. Both blazoned as "proper".

The County is the unofficial leader of the League and it's Cathedral in its namesake city serves as the meeting hall of the League Assembly.
(I tried to draw the "dandelions" myself, not really confident on them)


As a bonus, and not part a part of the challenge, the coat of arms for the League. Which was originally drawn on a desk in February 2017 and adapted into a digital medium in the May of that same year (completely drawn by hand... well, mouse):

Sorry for the delay everyone, my computer broke recently and I'm still without a replacement. Using a mobile device to create the poll thread was difficult and I honestly forgot to do it yesterday while I was busy trying to fix my PC.

Anyways, the POLES ARE OPEN (on the field!)

Additionally, the POLLS ARE OPEN!

Oh that sucks. I hope you can get it fixed for a reasonable price.
You must log in or register to reply here.
Top
Share:
Share
Top