United Duchies of Cornwall and Cornwall 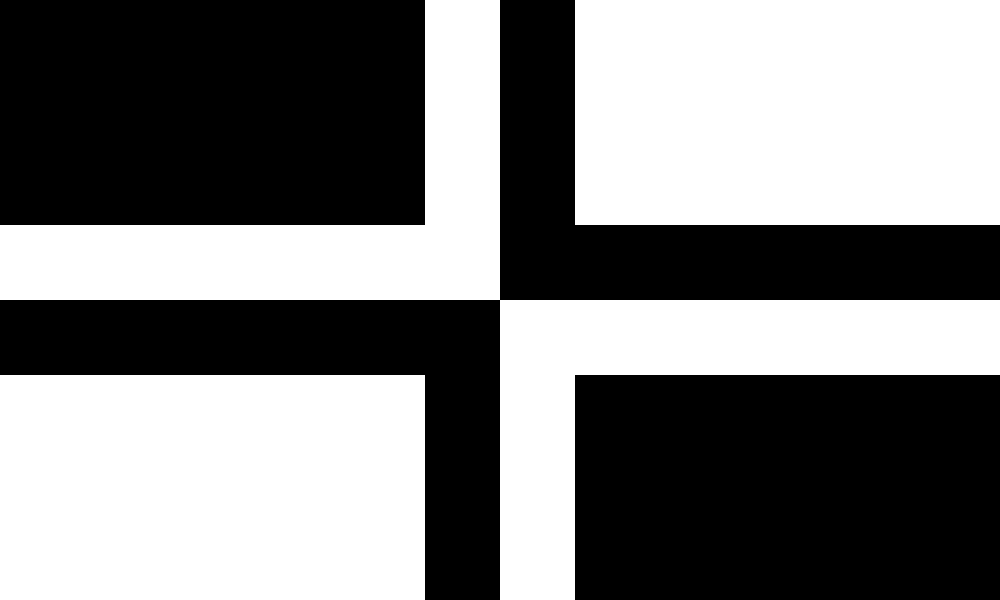 The United Duchies of Cornwall and Cornwall, commonly known as the Two Cornwalls, came about following the death of Mark V of Insular Cornwall (Sx: Cornweallas) without surviving issue and so the territories passed to Alan IV of Continental Cornwall (Gl: Cornouaille).

The moment I discovered that there was a Cornwall in Brittany - "Yep, this'll do!"

The Flag of the Kingdom of Northumbria-Flanders
In the 8th and 9th centuries, Viking raids were a fact of life for coastal communities round the North Sea. In the British Isles, the landing of the Great Heathen Army in 865 led to large swathes of the southern half of Britain coming under Danish control. In the low countries, the margraves of Frisia, Holland and Flanders struggled against the raiders.
In the absence of military support from the Frankish realms, which were preoccupied with their own problems including civil wars as well as Viking raids elsewhere, the Margrave of Flanders sought assistance from other lands under attack by the Danes and Norse.
The rump Kingdom of Northumbria, having lost the southern half of its lands to the Danes, agreed to an alliance, which was sealed by the marriage of the king's son to the margrave's daughter, Adelina.
Over the next century or so, both lands benefitted from the alliance. The Flemish started to attack Danish shipping heading both for their own coast and for the east coast of Britain, whilst seasoned Northumbrian troops were sent to Flanders to help repel raids and give advice on effective fortifications.
Flanders, now a County, expanded to the north by union with Holland and, later, Frisia. Northumbria managed to re-conquer its previous territory as far south as the River Ribble in the west and nearly to the Humber in the east, helped by the Danish being tied up with the occupation of the lands further south in Britain, having finally defeated the forces of Wessex.
Towards the end of the 10th century, a formal alliance was signed. No copies of the treaty remain for public viewing, though the Vatican acknowledged in 2013 that it holds a copy in its archives, since the treaty was witnessed by a papal envoy.
The alliance remained active for the next few hundred years, with trade enhancing the links between the two lands, though it was mutual military assistance which remained the basis of the pact. It was this which led to the union of the two lands. A combined Northumbrian-Flemish army, led by both the King of Northumbria and the Duke of Flanders (the County had become a Duchy some years before), was ambushed by an Anglo-Danish force whilst marching to the relief of a besieged city. Although the allied army won the ensuing battle, it paid a heavy price. Fully half of the men lay dead on the field, including the Northumbrian king, his son and the Flemish duke.
None of the dead leaders had surviving male children, which could easily have led to civil war in either or both lands, but each land was blessed at the time with sensible leaders, who managed to agree on an heir to inherit both the kingdom and the duchy.
King Herman of Northumbria-Flanders (Koning Hermen van Vlaanderen-Noordhumbrië) was the grandson of the Northumbrian king's father's sister, who had married the brother of the first Duke of Flanders (or last Count, depending on how you look at it).

The flag of Northumbria-Flanders combines the ancient 'Oswald's Stripes' of Northumbria with the Lion Rampant of Flanders.
The stripes, which had often been rendered as red over the centuries, were re-coloured as purple again, in recognition of the semi-imperial nature of the new nation.
Modern interpretations cite the red eye and teeth of the lion as symbolic of the blood shed in defence of the allied lands and the blue claws and tongue as symbolic of the sea joining them, but heraldic authorities note that these colours are commonly used on lions rampant; notwithstanding this, these 'reasons' for the colours are quoted in many publications, both online and hard-copy. 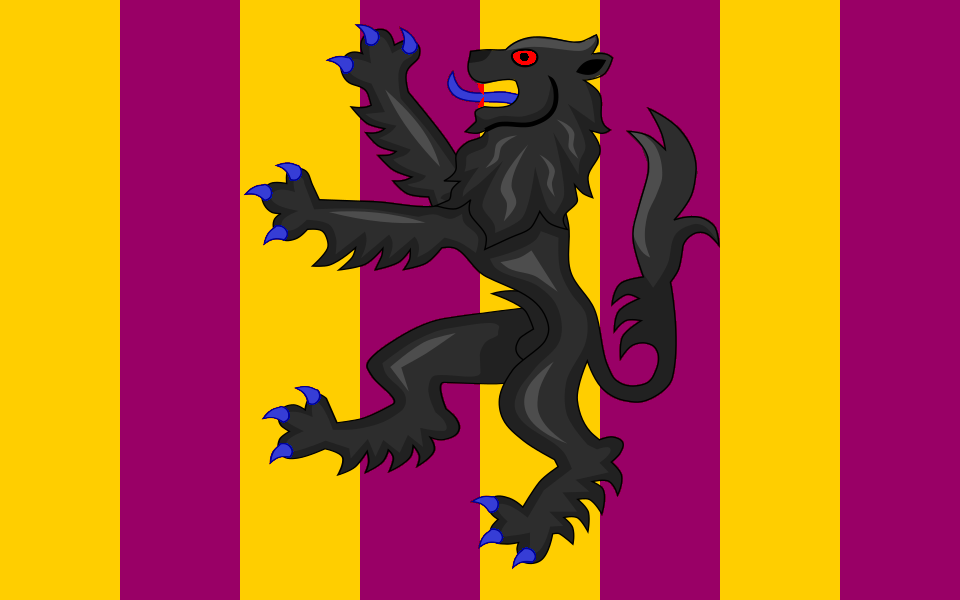 Image(s) created by FriendlyGhost using paint.net.
In accordance with the attribution terms of the licences noted below, you are free to use this image, including adaptation, as long as you give attribution. On this site (alternatehistory.com), just @ my username. On other sites, link to my profile page here.
The lion rampant in this image was amended from this image in the public domain:
Black upright lion (lion rampant sable) by Wikimandia, free for use and adaptation under the the Creative Commons Attribution-Share Alike 4.0 International (CC BY-SA 4.0) licence.
The rest of the image was created by me.
Edit: the first thing that came to mind for this challenge was a union of the villages in Gaul and Kent featured in Asterix in Britain - something involving symbols of herbs/cauldron/teacup or similar, maybe, just for a bit of fun - but since the PoD had to be after Roman Britain, that was out!
Last edited: Sep 6, 2020

And the poll is up.
Interesting entries everyone!

The Professor said:
And the poll is up.
Interesting entries everyone!
Click to expand...

Yea, sorry I couldn' t come up with a proper flag on time. Just couldn't get the look right for mine. Good luck to everyone, though.

Remitonov said:
Yea, sorry I couldn' t come up with a proper flag on time. Just couldn't get the look right for mine. Good luck to everyone, though.
Click to expand...

What were you going for (if I can ask)?

The Professor said:
What were you going for (if I can ask)?
Click to expand...

Second Gallic Empire of Constanine III. I couldn't decide on a proper look for it that doesnt just look like a Byzantine or Kingdom of Jerusalem rehash.

Congratulations @UrbanNight we look forward to your challenge!

The Professor said:
Congratulations @UrbanNight we look forward to your challenge!
Click to expand...

I'll try to think of a new challenge later today.

Congratulations @UrbanNight on your resounding - and very well-deserved - victory. I admit I debated whether it was even worth me entering after you posted your entry - it was very obviously a winner right from the start - a very clever combination.

FriendlyGhost said:
Congratulations @UrbanNight on your resounding - and very well-deserved - victory. I admit I debated whether it was even worth me entering after you posted your entry - it was very obviously a winner right from the start - a very clever combination.
Click to expand...

Aww, thanks!
Your one was really nice too, and I voted for that.

UrbanNight said:
Your one was really nice too, and I voted for that.
Click to expand...

Create a flag for a colony on the Moon, that was founded by a private company but is internationally regarded as part of a country's territory, no matter how loose or firm the law may be 400,000 km away from Earth.

Neat! I was always a fan of The Moon is a Harsh Mistress!

The LSSR was founded on May Day, 2020, combining several Soviet moon development companies into one.

General Secretary Malinkov, having successfully popularized “public computers” in the whole Union, started to turn his eyes on cheap and affordable space travel. In the mean time, the fall of Israel brought “home” to the Soviet Union a large group of Jews, among whom a young engineer named Elon Maskirov, who promised to manufacture space rockets like GAZ trucks, and space stations like flats. Lot’s of young Russians, who were supposed to be sent to Afghanistan IOTL, were in turn sent to the moon, whereas the living conditions may be worse.

By the 2000s, the moon has been a place of exile for Soviet dissidents and Kremlin outcasts, living conditions improved, and some made fortune, in Lunar Ruble, out of entrepôt trade to the lucrative Martian Colonies.

The LSSR was founded on May Day, 2020, combining several Soviet moon development companies into one, to exert better control in this fledging colony.

The bear symbolize resilience of Soviet space colonists, tree the habitat they created, and hammer and sickle the Soviet Motherland. I’ll upload a neater one when I have my computer with me. 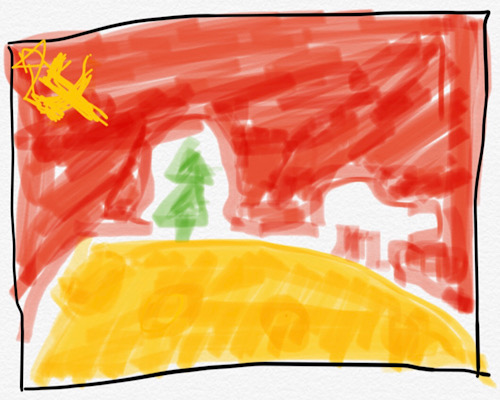 Green Painting said:
I’ll upload a neater one when I have my computer with me.
Click to expand...

But don't delete this one... there's something rather appealing in its naivety.

Only a single entry...

Did I make this challenge too restrictive?

UrbanNight said:
Only a single entry...

Did I make this challenge too restrictive?
Click to expand...

I don't think so. It's just that you posted the challenge at the start of the work week. I'm sure there'll be more in the weekend, when people have more free time.