Didn't think of hiding the flag inside. That's ingenious!

@Bicentius I think we're ready for a poll.

And a belated happy returns to everyone too!

Apologies for the delay; RL has been a bit hectic recently. Here is the next challenge.


FriendlyGhost said:
Flag Challenge 212: Not a Reconquista
In a world where the Iberian Reconquista (see wiki article here) did not succeed in pushing the Moors* out of the peninsula, create a flag for a modern-day nation in the Iberian peninsula.
It can be one of the nations from OTL, part-way through the OTL Reconquista (for example, see this map for AD1200) or a successor nation to one or more of them.
The flag may contain elements from OTL flags but if based on an OTL flag, you should include a link to it (just a link, no need to post the flag as well).

*Moors was the term at the time which is why I use this word here; no offence is intended.
Click to expand...

The Confederation of Murcia was formed by the Cuyper Accords to help resolve the Tribulations [1] following the Republican Wars. Like most of the Mediterranean Republics it had a triune State Council acting as Head of State, although most of its powers were delegated to the First Secretary. This being because each State Councillor was themselves a Head of State: the Princes-General of the Aragonese Republic, the Ra's of the Republic of Granada, and the King of the Commonwealth [2]. Pragmatically these were typically the Medial Prince-General, a Wazir of Murcia, and a Lord Lieutenant of Murcia (usually also of the Balearic Protectorate).
The Accords also mandated rotating the First Secretariat among Gharbi Muslim, Papal Catholic, and Sephardic Jew, with Secretaries of Government having portfolios for each. Half the Members of the Assembly are also assigned to each religious denomination at each census (currently 43% Muslim, 42% Christian, 15% Jewish) though it's not always clear if the Member is an actual practitioner rather than nominal.

The Flag of the Confederation itself is a compromise based on the historical and neighbouring flags albeit the Commission headed by Lord Lieutenant Miles FitzGerald carried through aesthetic considerations [3]. Blue is for Aragon, Red for Granada, White for peace, 3 stripes for the 3 major religions, 2 stars for the main traditional divisions of the region. 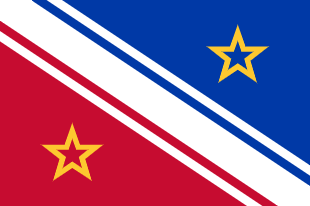 [1] Think OTL Troubles crossed with the Yugoslav Wars
[2] England, Denmark, Ireland, the Netherlands, Wendland, and the Overseas Territories
[3] No damn maps on flags!

[NB If anyone wants to provide some linguistic help for alt Mozarabic, Murcian, etc. translations this will cited gratefully!!!]
Last edited: Nov 4, 2019

The last of the Moorish kingdoms in the Iberian peninsula, the Emirate managed to preserve its independence from the Spaniards to the north. The Nasrids maintained control of their kingdom through the centuries, keeping an uneasy peace with Spain. The country languished under leadership of its ruling dynasty, a shadow of itself. Temporarily aligning with France, Granada agreed to occupy parts of the nation in return for economic aid. When Arthur Wellesley liberated Spain from the French, Granada soon found itself under British occupation that would last for two years. In 1832, after years of inept leadership, the citizens rose against the sultan and proclaimed a republic. The sultan was forced to fee to neighboring Morocco. The republic is a parliamentarian democracy lead by a Grand Vazir. 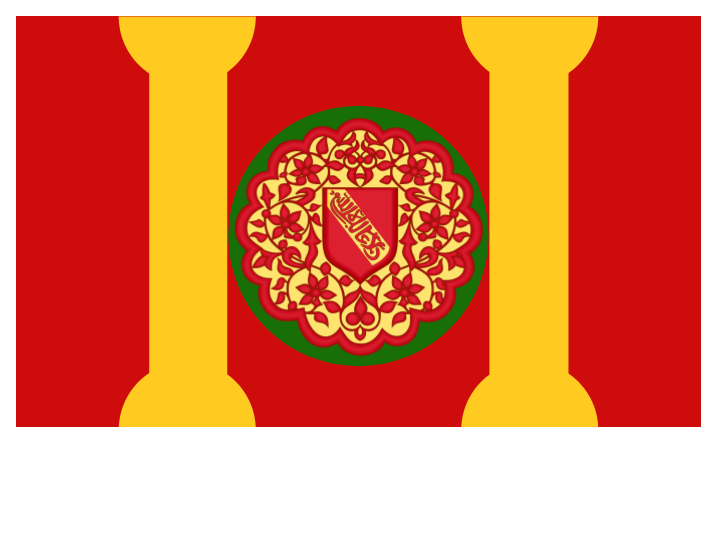 The flag uses red and gold as a homage to the original flag of the emirate of Granada. The two pillars symbolize the mountains the nation rests in and the sea that borders it. The center is the seal of Granada.
Last edited: Nov 4, 2019

Here is the poll: https://www.alternatehistory.com/forum/threads/poll-for-weekly-flag-challenge-№-212.478201/
Good luck to both entrants!

And the winner is... @The Professor
Congratulations!

FriendlyGhost said:
And the winner is... @The Professor
Congratulations!
Click to expand...

I'm open to ideas and suggestions for the next challenge.

The Professor said:
Thank you kindly.

I'm open to ideas and suggestions for the next challenge.
Click to expand...

The Professor said:
Thank you kindly.

I'm open to ideas and suggestions for the next challenge.
Click to expand...

OTL nation-states dominated by a different regional culture, as in France dominated by Provence, China dominated by Guangdong, Spain by Catalonia. Flag of the nation.

Regional separatism in such a country (by the OTL dominant region). Flag of the region.

Overseas colonialism in such a scenario. Flag of the colony.
Last edited: Nov 17, 2019

Green Painting said:
OTL nation-states dominated by a different regional culture, as in France dominated by Provence, China dominated by Guangdong, Spain by Catalonia. Flag of the nation.

Regional separatism in such a country (by the OTL dominant region). Flag of the region.

Overseas colonialism in such a scenario. Flag of the colony.
Click to expand...

I can't remember what thread it was but someone mentioned they were so sick of the "English-speaking British Argentina" AH meme that they wanted to see an America that spoke Pennsylvania Deutch as a counterbalance.

The Professor said:
Flag Challenge 213: Those were their days, these are ours!

It's been a few centuries since the Infamous Ritual weakened the boundaries between worlds and brought magic back to Earth.
Old nations have fallen, new nations have risen, others have survived. Life, and politics, goes ever on.
And the greening poles, deserts, and habitable worlds created new opportunities to exploit - colonialism thrived.
But all colonial powers fade and their children make their own names...

...and flags!
Your challenge is to create a flag for a colony following its political independence in this new magical age.

Restrictions:
Your Ritual must take place after the age of heraldry and before post-colonialism (Roughly 11th to 20th CE)
No published worlds can be used - that means no Middle Earth, Skyrim, or Planetos.

EDIT: Also, is the post-colonial nation confined to one world, or can it transcend two (or more) as long as there's an active portal?
Last edited: Nov 19, 2019

Awesome! Can I make two flags, e.g the Colonial flag and the post colonial one?
You must log in or register to reply here.
Top
Top