I always thought a new BDSM/kink flag would be cool, but I don't have the time to make one, unfortunately 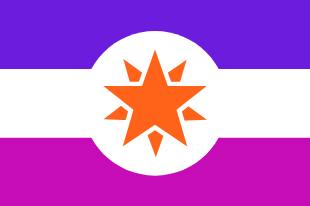 The AIMS is the primary protest group of British India [1] for allogender [2] rights.
The flag is based on the traditional British protest tricolour with the green turned pink for mollys [2].
In the centre are 2 overlapping orange stars, orange for India, stars for liberty, and was sort of a pun on the Greek Hydra and the Hindustani word for molly Hijra.

[1] The Indian Continent remained divided between the European Powers
[2] A sort of mixed category that covers both homosexuality and transgender, it arose from third gender (hijra) groupings in India that garnered mainstream support in the UK after being taken up by the Molly house community (a precursor to OTL homosexual movement). 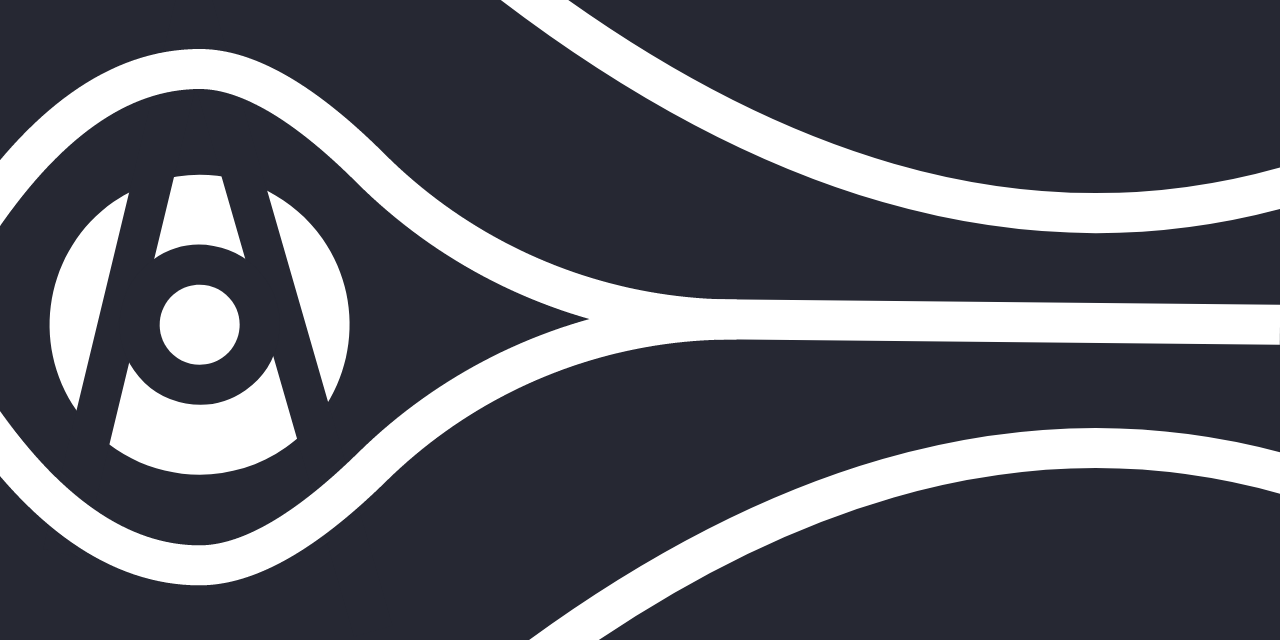 While many symbols and flags are designed carefully from inception to completion, few are borne out of sheer necessity.

In this case, the Dovestream banner is an evolution of the Dove pendant symbol, used by the All-Love movement to secretly signal other members of their movement or people of the same persuasion. While the exact origin is indeterminate, the dove pendant symbol is theorized to have started out as a stylized "A" inscribed in a circle representing the All-Love movement. A stylized dove seems to have taken shape in the symbol as an unintended consequence and has been adopted as a mascot of the movement. The streaming lines represent the main goals of the All-Love movement, to navigate between the forces of reactionary politics and conservative religion (the curved top-right and bottom-right curved lines) and work together for a more accepting future for All.

The All-Love operates primarily in the North American State (NAS), where the fundamentalist Secured Party and Secured Church serve as the main governing body. All forms of non-binary persuasions are a capital offense and result in immediate execution after a show trial. As such, secrecy and accessibility is paramount: the Dovestream banner is easily drawn and quickly recognizable, needing only 8 strokes to fully draw. (Outer circle, inner circle, 2 diagonal lines through the circle. 4 streaming lines). Officially, the banner represents a small chain of motels in the NAS called the Stonewall Inn (insignificant enough to be above suspicion), with the true meaning being kept a carefully guarded secret.
Last edited: Sep 11, 2019

The Poll is Here.

We are getting close to the ten year anniversary of the Weekly Flag Challenge! Just over one week from now.

Transparent Blue said:
We are getting close to the ten year anniversary of the Weekly Flag Challenge! Just over one week from now.
Click to expand...

That seems to suggest a theme...


Create a flag that when transformed in some way (folded in half, rotated, flipped vertically, or some other folded pattern) represents something drastically different from the original meaning. The colors should stay the same!

@Green Painting Not sure about the poll timing

Okay, this is an interesting and different challenge.
I hope I get enough time to enter this one.

Bicentius said:
Not sure about the poll timing
Click to expand...

According to the rules
The contest: 4 days
The vote: 3 days
But they may be extended.

Green Painting said:
According to the rules
The contest: 4 days
The vote: 3 days
But they may be extended.
Click to expand...

Huh, thought we'd overwritten that with 7-7 .

Flag of the ViceRoy of New England
The flag consists of 2 halves: the sinister is that of New England, a St George Cross bearing the New English emblem of a green maple leaf; the dexter is that of the Royal Councils-in-Union, a dark blue field with the Crown-Cross-&-Sun symbol of founder Union-King Rupert I Cumberland. 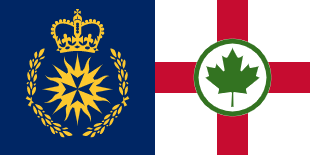 @Bicentius
Can we post more than one picture, to show the flag folded and unfolded? (And maybe how it folds, if that's complicated?)
Essentially, I guess I'm asking if this can be a 'multi-flag' challenge, according to Rule 3?
Otherwise my idea could be a bit tricky to visualise, from just the unfolded flag. Though, thinking about it as I type, I might be able to shade it differently, if you'd prefer to keep the challenge as single-flag.
(That's assuming I can get it to work at all - it's a bit of a vague concept at the moment! )

FriendlyGhost said:
@Bicentius
Can we post more than one picture, to show the flag folded and unfolded? (And maybe how it folds, if that's complicated?)
Essentially, I guess I'm asking if this can be a 'multi-flag' challenge, according to Rule 3?
Otherwise my idea could be a bit tricky to visualise, from just the unfolded flag. Though, thinking about it as I type, I might be able to shade it differently, if you'd prefer to keep the challenge as single-flag.
(That's assuming I can get it to work at all - it's a bit of a vague concept at the moment! )
Click to expand...

I think multi flag is perfectly acceptable. Whatever works for you!

Flag of the Osmanid Empire

This Flag is used by the Osmanid Imperial Government and Navy and in addition is often used by their Turkish and European Islamic Subjects. Many Orthodox subjects of the Osmanids opposed to their Islamic Turkish rulers especially Orthodox Greeks in Thrace fold the flag in half and flip so that it resembles a flag that was supposedly used by the pre-Ottoman Orthodox Roman/Byzantine Empire. The Folded flag remains popular in the Greek province of Thrake. 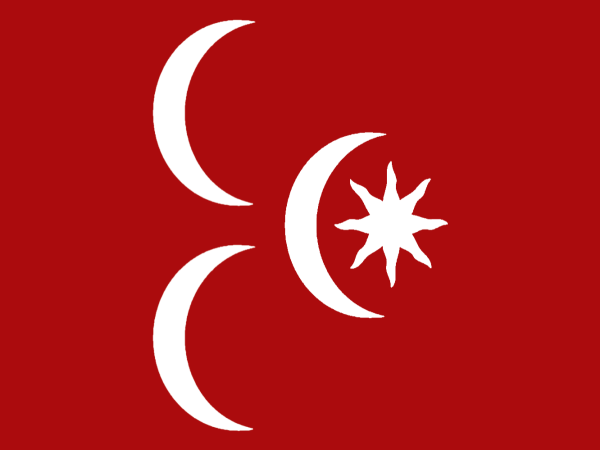 Folded Flag used by Anti-Osmanid Greeks [the placement of the emblem is supposed to show the flag as folded.] 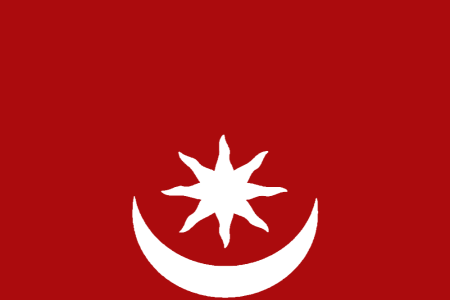 The Hidden Banner of the Sons of Wotan
The Sons of Wotan (Söhne von Wotan) was just one of the many radical groups which sprang up around Europe in the 19th century. Despite its radicalism (which in modern times might be termed fascist or far-right, with some anarchist tendencies mixed in), it had no noticeable impact on history. This was no doubt due to the extreme paranoia of its members, who went to extreme lengths not be noticed by the authorities. This had the positive effect of enabling the group to continue for a relatively long time, even surviving the tumultuous formation of the Deutsches Reich and the Franco-Prussian War. However, the negative impact was that it was almost impossible to recruit new members. As a result, instead of being closed down by the authorities or destroyed in a battle with another opposing group, the Sons of Wotan simply died out - literally - as its members grew old and died.
This banner was discovered by a deceased member's daughter when she was sorting through his effects. The banner was folded and clipped in such a way that it looked just like the national flag of the empire, with the only apparent oddity being that it seemed to be designed to be hung from a horizontal pole instead of being flown from a normal vertical flag-pole. However, when the small, almost invisible, clips were removed, the banner unfolded to show, hidden between the two flags, the red-on-black symbol of the Sons of Wotan (primarily the rune ansuz - which was apparently a symbol of Wotan, the chief germanic deity, god of battle and war - at least according to the Söhne von Wotan...).
It seems that the group would hang the flag in the room where they were meeting and only unfurl the hidden banner when they were sure there were no 'traitors' amongst them.
The Fahne der Söhne von Wotan in der Kaiserflagge versteckt ('banner of the Sons of Wotan hidden in the imperial German flag') was put on display in the local museum, part of a display about anarchism and radicalism, but was lost during the Second World War. Only photographs remain of this ingenious, but ultimately futile, 'hidden banner.'
Unfurled: 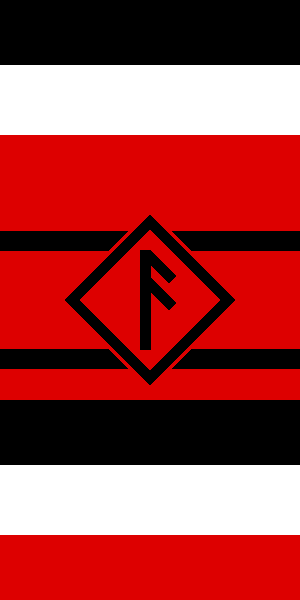 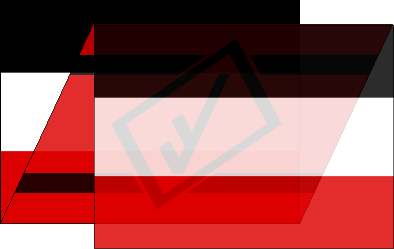 @Bicentius - this was a fun challenge, thank you!

That's quite brilliant! exactly the kind of thing I was hoping to see.
You must log in or register to reply here.
Top
Top