The Weekly Flag Challenge (WFC) was started in 2009, as an effort to supplant the scattered and overly one-shot flag challenges that dominated the board until then, with a regular, professionally organized competition. Taking inspiration from the Map of the Fortnight map challenge project, the WFC has grown into the premier regular flag competition of AH.com.


RULES
​
This is the official set of rules for the Weekly Flag Challenge.

Threads
The cycle
The Weekly Flag Challenge works like the Eurovision Song Contest. The winner of a round chooses the theme for the next round and sets it up.

The previous winner thinks of an idea for a Weekly Flag Challenge. Restrictions on challenges:
2.) Announcement

The previous winner announces the next challenge in the “New Challenges & Previous Winners” thread.
3a.) Entry submission

Entrants submit designs in the “Discussion & Entries” thread. Restrictions on entries:
3b.) Judges should make efforts to avoid disqualifying entrants
4.) What happens if not enough people enter

If the round closes and there are less than two entries, the round organizer is allowed to extend the round by up to seven more days.
5.) Voting

When the submission period is over, the round organizer makes a poll thread entitled “Weekly Flag Challenge #[round number] voting” in the Alternate History Maps and Graphics subforum.
6.) Winning

When the poll closes, the entry with the most votes wins.
7.) The cycle starts anew
Changing the rules
On the discussion page, anyone can recommend a change to the rules list. If enough members agree that the proposal has merit, a poll will be conducted on the Alternate History Maps and Graphics subforum. It will include the proposal and two options (FOR and AGAINST). It will close after four days and the option with the most votes will win. The rules on this page will be adjusted accordingly.

Alternatively, Transparent Blue might see something very banal that needs adjusting (usually just copyediting or clarification) and edit this post.

Offenses
We try to keep this competition friendly, so we will only get pissy about plagiarism. First you will be warned, then you will be banned from the Weekly Flag Challenge.


FAQ​
1. Why are there two threads?
By having a separate thread for new challenges, it makes it easier to tell when a new challenge has been posted.

2. Why are entries anonymous on the voting thread?
Contrary to popular misconception, this is not strictly to prevent voters from finding out who made which entry. We are perfectly aware that members can look into the other threads and find out the authors.

It is actually related to the halo effect, a verified psychological effect in which fame and reputation (or lack thereof) can bias selection behaviour. By excluding any visible indicators of the contestants, we aim to reduce this effect and produce fairer results based only on the quality of the entries. This technique does rest on the assumption that in judging the flag entries, voters will be satisfied with viewing the flag entries alone and not go out of their way to go to another thread to search for the identity of every entry's artist. However, there is no evidence that anyone has ever done that, nor that anyone would feel this is necessary to make a voting decision.

3. Why are winners of a round forbidden from entering the next round?
To prevent winners from choosing a challenge theme they can win easily, and then winning it easily, starting a cycle that locks others out.

5. I won a round but then deferred the theme selection to a Volunteer. In the next round, am I forbidden from entering?
No, you can enter. The restriction only applies to the member who thinks of the next challenge theme.

6. Why is there a size limit on entries?
Before we had a size limit, some entrants would submit very large images. The size differences made it difficult to compare entries, the images sometimes went off the screen, and the images could not be viewed properly when browsing on mobile devices. A size limit was created to prevent these issues.

GUIDE FOR WINNERS
​
If you won the Weekly Flag Challenge, please click here for an easy guide for what to do, including templates.


GUIDE FOR VOLUNTEERS
​
If you are a Volunteer, please click here for an easy guide for what to do.

LIST OF MEMBERS BANNED FROM ENTERING THE WEEKLY FLAG CHALLENGE​
None so far, and let's keep it that way!
Last edited: Jun 14, 2021

Challange: Create an imaginative flag for a British Dominion of India that DOES NOT Include the Star of India or IS NOT a defaced ensign. Good Luck .

My theme would be another pan-[x] colour scheme, along the lines of the pan-Slavic, pan-Arabic and pan-African colour schemes.

Flag of a North American Union that also has UK and Ireland as equaly important areas.

Spitfiremk1, don't forget to post your preferred suggestion in the other thread soon. The contest goes for seven days after that post, which makes it easy for every-body to track.

In any case, here are my current suggestions:

- Choose any national-flag that you dislike and design a better one.
- Improve a Soviet-Socialistrepublic flag.
- Improve a United-States of America State flag.
- A colony on The Moon.
- A colony on Mars.
- &etc.
- Alternate United-Nations.
- A colony that is under-water.
- Design a flag for a location that does not have one.
- A future China.
- A united Korea.
- An alternate split (for example North and South Korea, or East and West Germany). May be past, present or future.
- A flag for your-self.
__________________

Flag of Burgundy
Flag of a Brazil being colonized by Dutch
Flag of the reunited Kingdom of Arnor and Gondor
Last edited: Oct 5, 2009

So, what do we do until Spitfire starts the competition off?
Got my India flag already....

Well, is anyone going to Post, the Competition has Started.

Here it is.
Red for Hindus, Green for Muslims, with no one colour dominant.
Plus a badge including the Union Flag.
Not sure what I was going for with the white circle but ah well. 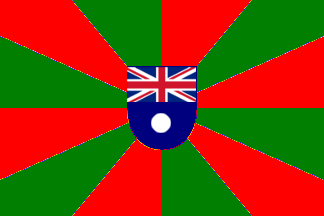 My entry - triple cross and 13 stripes taken from the East India Flags for their history in "settling and subduing the sub-continent". Red, white and Blue from the Union Jack for Great Britain. Lotus flower and Dharma Wheel for the Hindu people (ignoring the muslim population, which will lead to problems later to be sure. But the British made lots of cultural errors like that...) 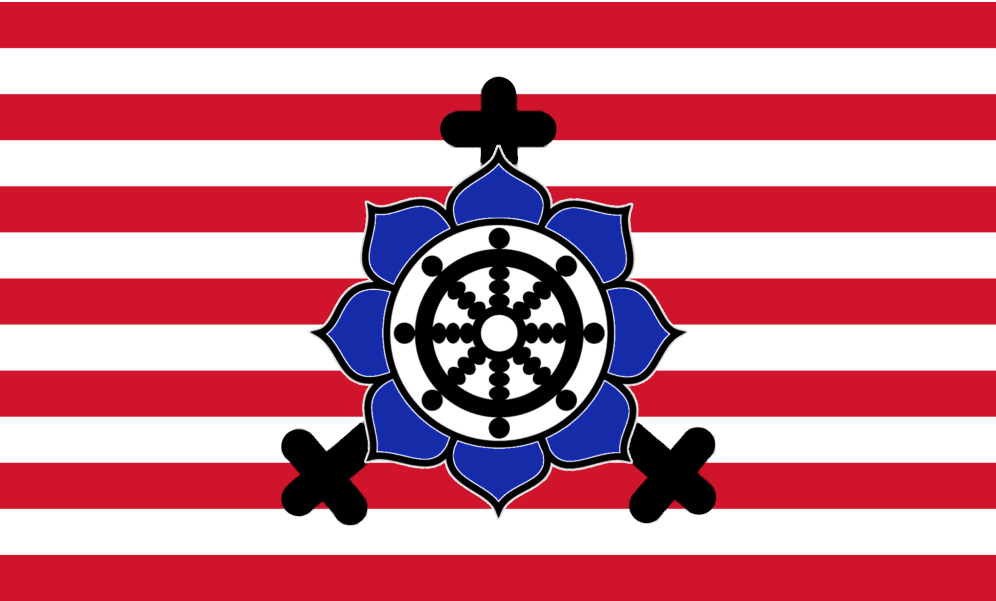 My entry, I did it at work quickly and photoshop-less so the quality is not wonderful.
Khaki color is for India, and so is the bengal tiger, ofcourse.
I don't have any idea what the palm tree stands for, but I liked the tiger badge (taken from an indian squadron of RAF), and I felt like the palm tree filled up the empty space very well

Here's mine, the usual colour symbolism. The stars in the hoist represent the states or provinces left in the union after a flurry of independence-declaring fun, and the symbol in the disc is that of the home rule movement.

Here is mine, not as good as everyone else but here goes:

The spinning wheel to show its great cotton and manufacturing industry

The tiger represents the spirit, culture and people of India, as well as the armed forces

The Aum is for the Hindus, just to throw in the symbol 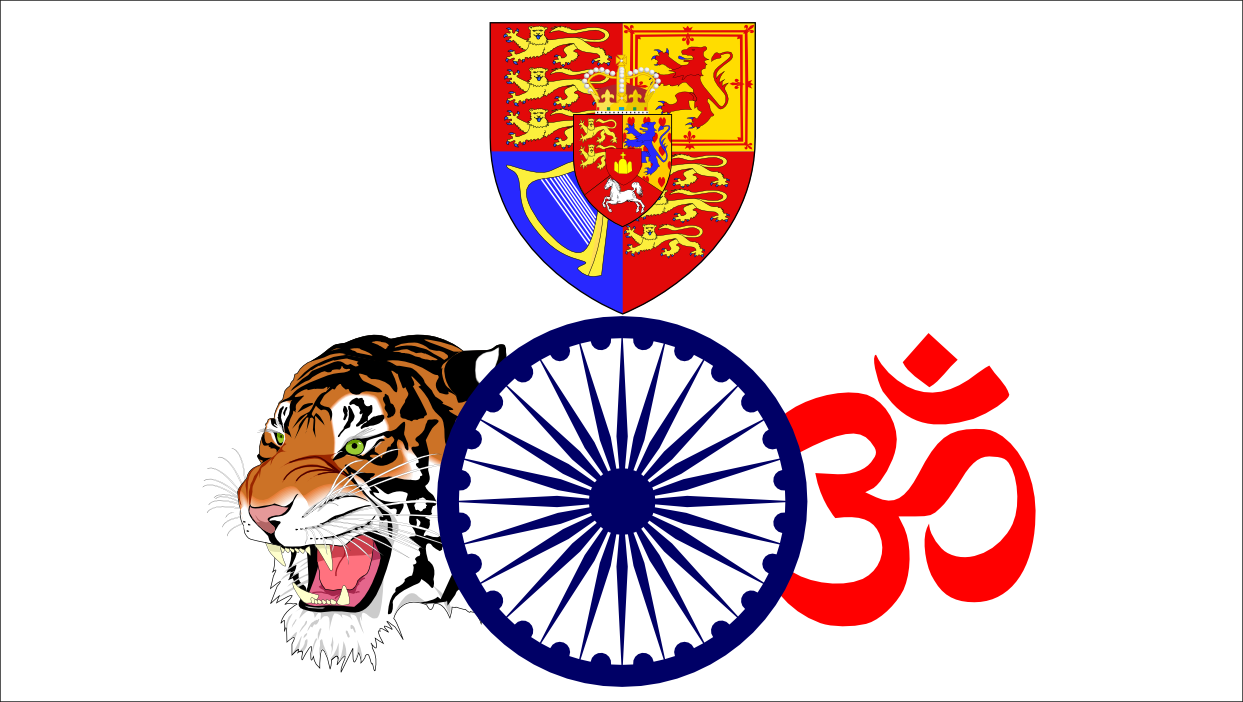 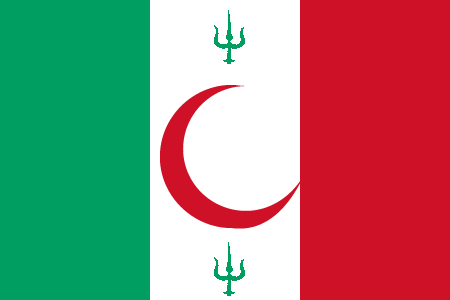 Thank you, Aranfan! I don't think that the vote is open yet!

Anyway, I'm not completely happy with my entry, the Tudor-ish badge is too english-centered, but I tried to put on another badge with a more british look and the flag suddenly became waaaay too crowded, so i will stick to the previous version, and good luck to me in the challenge lol
Last edited: Oct 10, 2009
You must log in or register to reply here.
Top
Share:
Share
Top