Here I start a threat to maps, infoboxes and other things from my semi-TL Velikorossia, where Bolshevik national politics goes a little different, lead to RSFSR collapsed in 1936.

and the first will be

Map of the Post-Soviet Nations in my Velikorossia Unverse
some notes:
1. Königsberg goes to Poland after WWII, not to USSR. But USSR took Polish sities of Helmno, Belostok and Przemysl. Easternmost East Prussia (Lesser Lithuania) goes to Lithuanian SSR.
2. Moldova was reunited with Romania in 1992, during the bloody collapse of the Soviet Union
3. Crimea is mostly Tatar.
4. Abkhazia was separated from Georgia since 1936, after the collapse of the Caucasian (OLT Transcaucasian) SFSR. Southern (and Northern) Ossetia is still part of the Georgian Federative Republic.
5. Yes, Vilnius TTL is capital of Belarus, not Lithuania
6. Ruthenia [Zakarpattya] never became part of Ukraine TTL. They declared independence from Hungary in 1944, and join USSR ans union republic in 1945.
7. Mari El declared independence from Tatarstan in 1994, during the collapse of Soviet Union
8. Nogaistan for a long time was an autonomous republic in Kuban. In 2015, during the Second Kuban Revolution, Nogais peacefully seceded from Kuban and create an independent republic.
9. There was no CIS or other post-soviet nations associations.

Don Republic regime as in the 2019 is reported as the hardest right-wing regime in Europe (may be, with Poland somewhere around). Political scientists often talk about "Right-Wing Don", meanind the political traditions of Extreme-Right leadership in Nation since the 1917, with Atamans Kaledin and Krasnov. But really, in 1993 such perspective for Don was not obvious.
First Modern Don president, Vladimir Chub, was former Communist leader. He keep neutrality during the Soviet Civil war of 1992-1993, which allows Don to avoid war in nation's territory. Don and Kyrgyzstan were the only post-soviet republics not to ban Communist Ideology in Early 1990-s [Don did it later]. Really, not only Don Communist Party, but even radical Internationalists Movement of Donbass worked legal in Don Republic. But all changed in 1995, when Crisis in Don Coalmine industry hammered the Nation's Economy. At the wave of discontent, the Don crossed the Rubicon - Radical Nationalist Vladimir Melikhov from Prisud [Don werb, hard for translating, approximate - "Land, which God give to Cossacks"] Party wins the 1997 Presidental Election over the IMD Candidate. In 2002, Melikhov was changed by General Victor Vodolatskiy, Minister of Defense. Vodolatskiy changed the Constitution, create the full-presidetal Republic with 6-years Presidental term 2000-s seen the slow grouth of the Don Economy, despite the EU sanctions. Since the 2011-2012, Vodolatskiy tried to improve relations with the West, which lead to amnisty to some Political prisoners, and mitigation of the regime. In 2014, he decided not to go to the third term, but give his support to Irina Yarovaya, Minister of Social Policy, who represented the Adat [Don: "Tradinion"] Party - Junior Prisud ally, also Social Conservative, but more Moderate, than Prisud itself. Vodolatskiy, however, saved the posts of Minister of Defense, and Secretary of the Security Counsil. Many political scientists ever named Yarovaya "Vodolatskiy Mask for the Western auditory", meaning, that Vodolatskiy is still real head of the Don Republic. 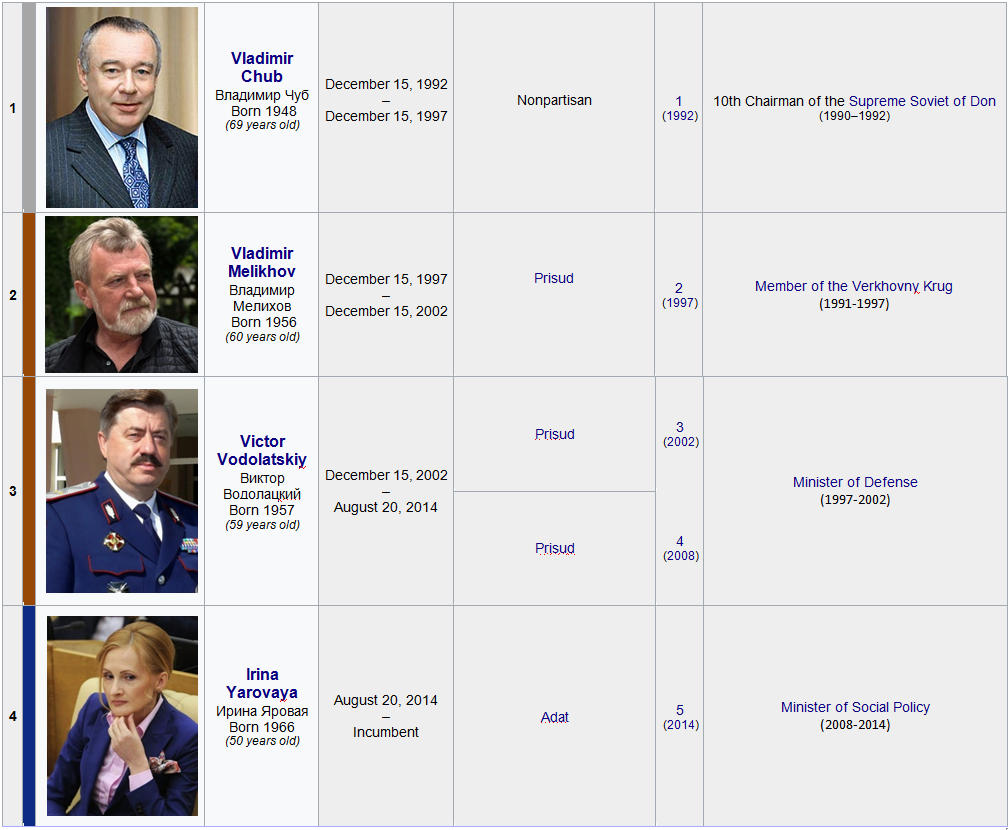 Velikorossian SSR govenment position mostly lead to Unionist loose the Soviet Civil War of 1992-1993. Velikorossian President Boris Yeltsin opposed the idea in the USSR Presidents Mikhail Gorbachev [1990-1991] and Mintimir Shaimiev [1992-1993] to send the army into Separatist Ukraine. Moscow and Saint-Petersburg even became the kind of home front for Unionists, when Shaimiev tried to depose Yeltsin. Later, Yeltsin was one of the initiators of dissolution of the USSR remnants, after Shaimievs death in 1993. He also was initiator of the Communist Ideology ban in Velikorossia.
Yeltsin was very popular during 1990-1993, but decline in living standards because hard after-war conditions and difficult transition to a market economy lead to peoples's disappointment in him, and, also, in Liberal Democracy.
This lead to Hard-Populist and Pan-Russist Vladimir Zhirinovsky frome the Centrist [name means - Non-Communist, but also non-Liberal] Party wins the 1995 Election. But Zhirinovsky mostly failed during his presidency, and in 1999, National Democratic Party [National Liberals] candidate Nikolay Travkin come to power. During the NDP rule, GDP and standards of living in Velikorossia growth [thanks to both more successful Transition to Market Economy, and Oil Prices Growth]. But after 2009, Velikorossian Economy economy entered a Crisis. NDP President - billionaire and former Finance Minister Alexander Lebedev was not able to change the situation, that lead to new growth of the Populist Ideas [really, it was the World Trend in 2010-s]. The most sucessful new Political Project was People's Party of Altay Politician and former stand ap comedian Mikhail Yevdokimov, which mixed Nationalist, Socialist, Agrarianist and Ecologist Ideas. In 2015, Yevdokimov defeated NDP Candidate - Vyatka Mayor Nikita Belykh, and wins the Velikorossian Presidency. Yevdokimov died in a car accident in 2018, lead to "Red-Green Coalition" he created collapsed. In August 2019, young, ambitious and popular Dmitry Gunkov, new leader of the left-wing and Ecologist Humanist Party of Velikorossia stormed snap the presidential elections 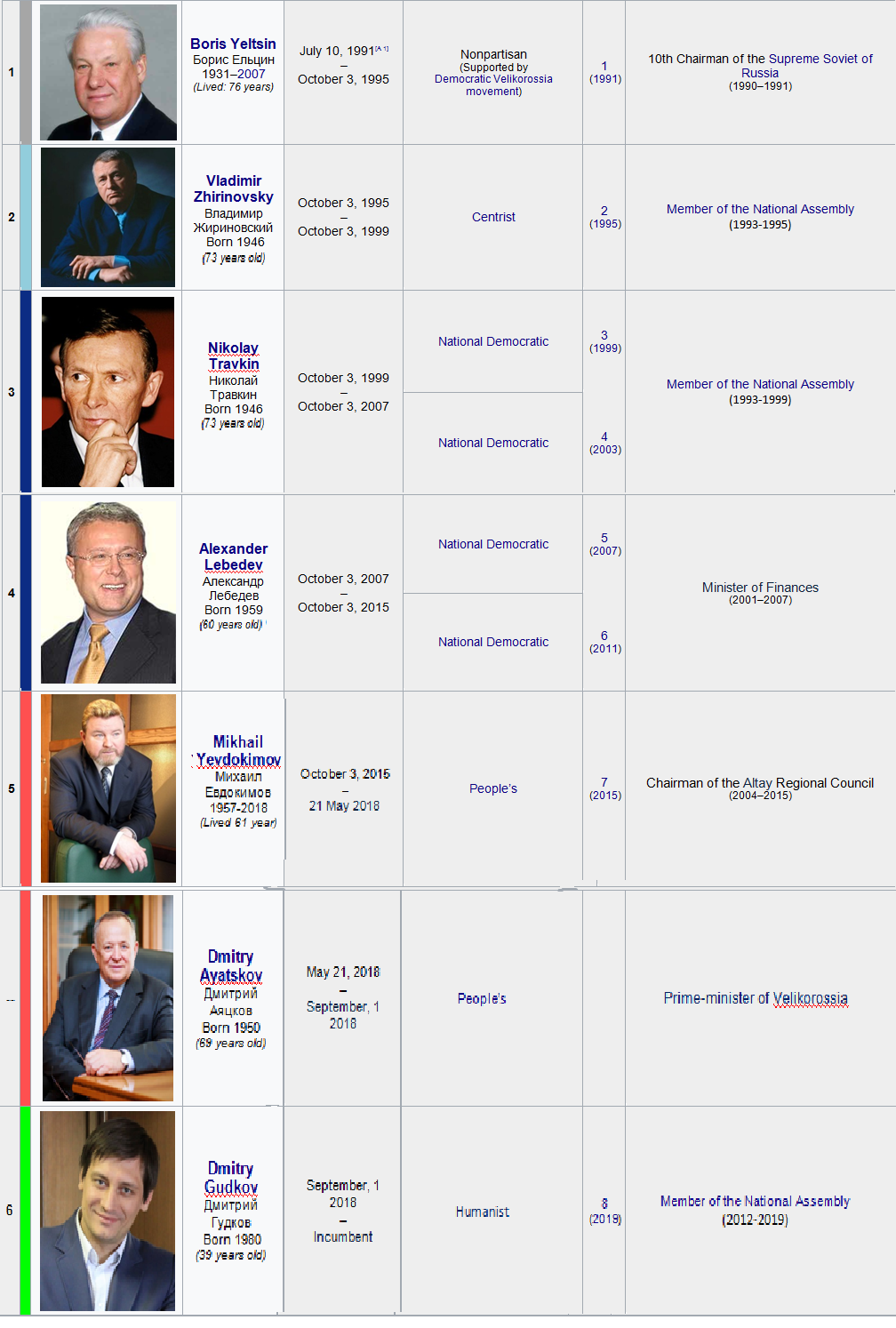 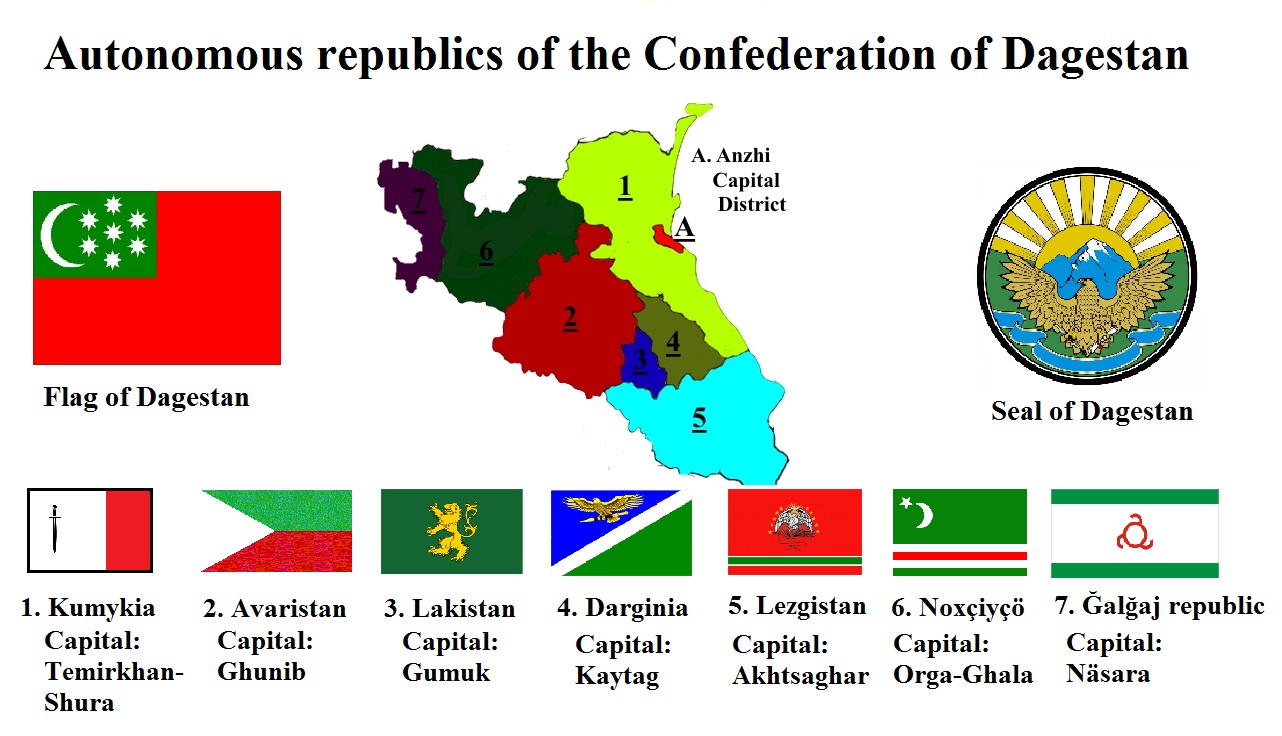 Ukrainian administrative division was radically changed after the Independence, Independence War 1992-1993, and radical reforms after the Presidency of Yevghen Marchuk. Soviet-style division into 28 Oblasts was changed to 65 Poviets [Ukrainian for 'districts"]. Also, "Marchuk' Constitution of Ukraine of 1999 relocate capital of country from Kyiv to new-builded city of Nova Sich [former Baburka suburb of Zaporizhia and the island of Khortytsia]. 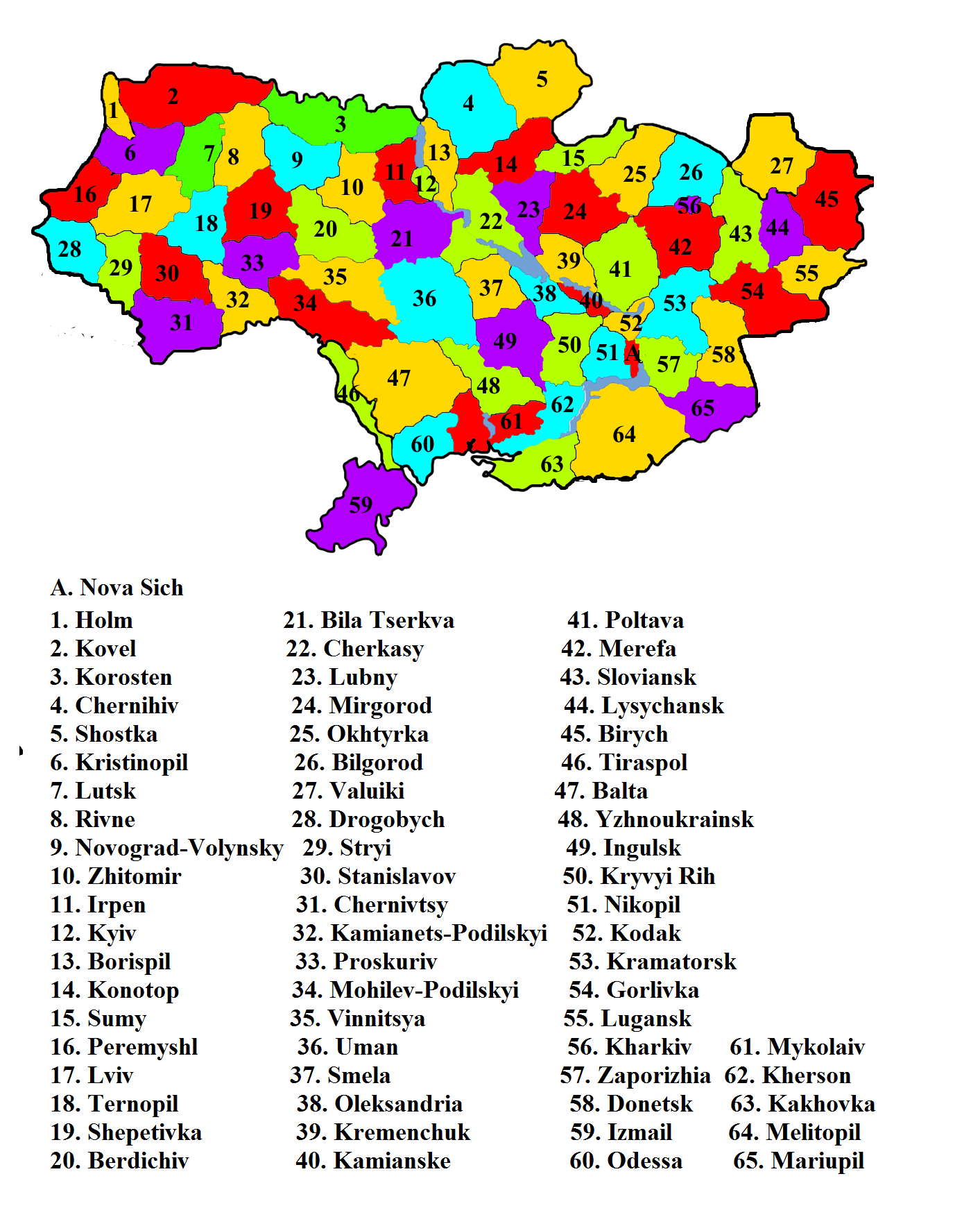