Until Liberty Enlightens The World: An Alternate America and an Alternate Cold War

What is the ambasador to the liberal league (is it like the equivalent of the un?)

Eylondambovich said:
Why are there so many cabinet departments?
Click to expand...

Less reorganization, no consolidation into the DoD, and less of a tendency to create independent or quasi-independent agencies.


Rfl23 said:
What is the ambasador to the liberal league (is it like the equivalent of the un?)
Click to expand...

Think somewhere between the UN and NATO.

Jamee999 said:
Less reorganization, no consolidation into the DoD, and less of a tendency to create independent or quasi-independent agencies.


Think somewhere between the UN and NATO.
Click to expand...

So un and nato still existed?

He was comparing it to those organizations, not saying that they actually exist ITTL.

Arthur Marston said:
He was comparing it to those organizations, not saying that they actually exist ITTL.
Click to expand... 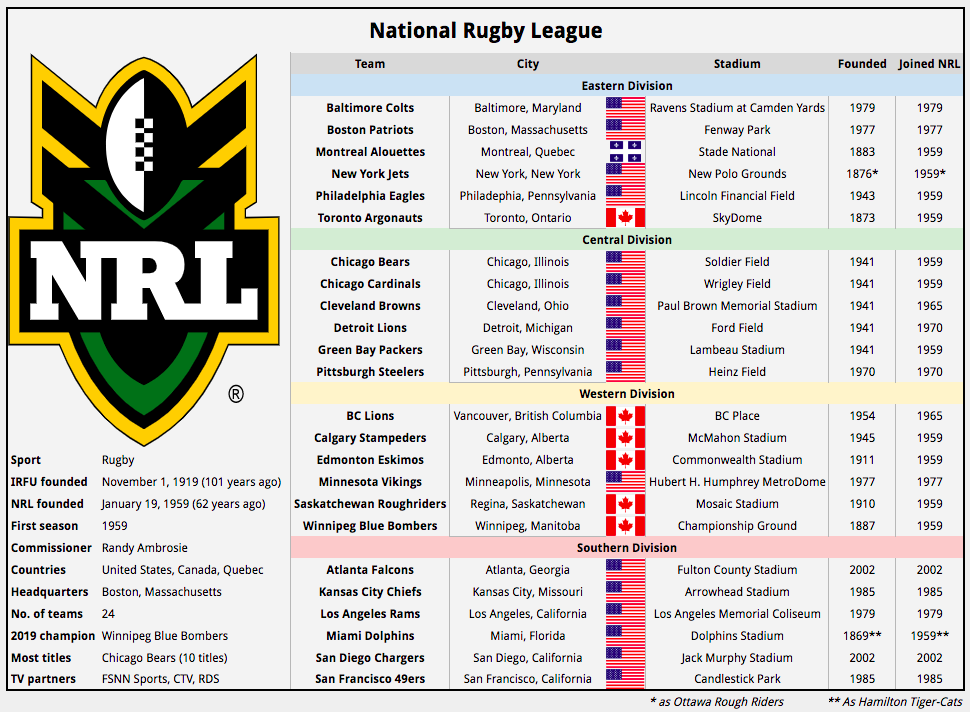 Quebec gained their independence? When and how?
Last edited: Jun 17, 2020

As a cheesehead it's nice to see the Packers are alive and well ITTL (and I'm guessing still founded by Curly Lambeau) and in the same division as the Bears and Lions. I do wonder if the Packers are publicly-owned like their OTL counterparts. 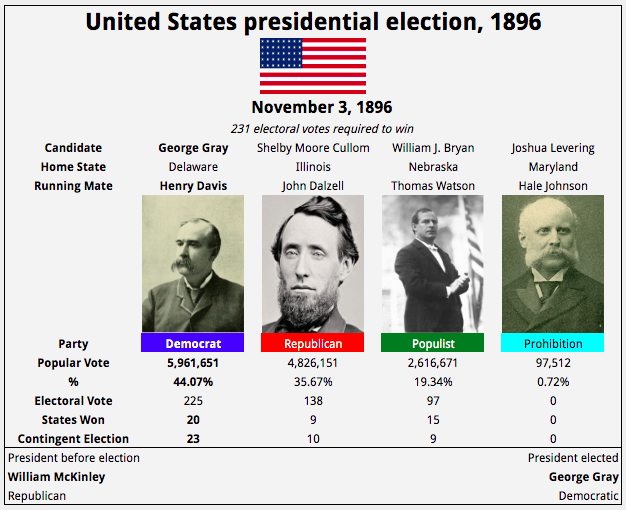 The 1896 United States presidential election was the 28th quadrennial presidential election, held on Tuesday, November 3, 1896. Democratic Senator George Gray of Delaware defeated Senator Shelby Moore Cullom and Congressman William Jennings Bryan. William McKinley, the incumbent, was not nominated for re-election by the Republican Party. The election took place during the Panic of 1893, an ongoing economic recession which had led to a wave of support for populist policies. It was the first election in which Idaho, Jefferson, Montana, and Wyoming cast electoral votes. While the new western states were expected to be Republican, all four cast their votes for the Populist Party. It was the first election since 1824 to require a contingent election in Congress to decide the winner.

The incumbent President, Republican William McKinley of Ohio, was extremely unpopular because of his response to the Panic of 1893, and for his support of protectionist measures, which were widely believed to have made the crisis even worse for American consumers. The midterm elections of 1894 saw many western seats flip to the Populists, and many eastern ones flip to the Democrats. McKinley's popularity dipped even within his own party, and at the Republican National Convention in St. Louis, he failed to win even half of the votes on the first ballot, and had his name withdrawn from the balloting. The other leading candidates were former Speaker of the House Thomas Bracket Reed, Senators Matthew Quay and William Allison, and Governor of New York Levi Morton.

However, after several ballots, none of these candidates gained a significant amount of support, and eventually a dark horse candidate emerged - Senator Shelby Moore Cullom 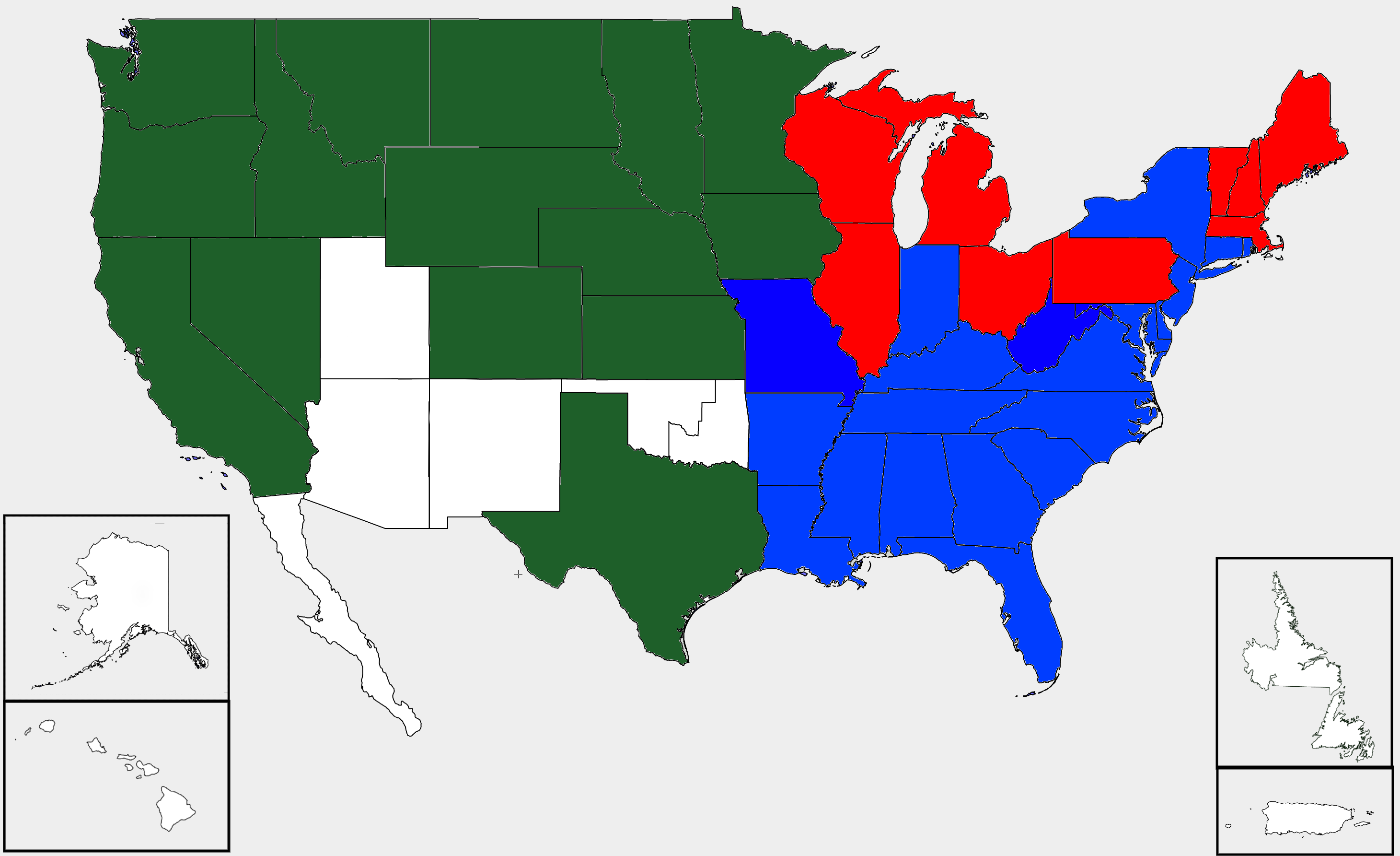 of Illinois, a former state Governor, who had also been the champion of the 1887 Interstate Commerce Act, and who was relatively moderate on tariffs compared to many historically protectionist rivals. Cullom also allowed Republicans to "wave the bloody flag" - as he had been first elected to Congress during the Civil War, in 1864, and Cullom's father, Richard, had been a close ally of Abraham Lincoln's when both served in the Illinois statehouse in the 1850s. Congressman John Dalzell was chosen as Cullom's running mate.

For the second consecutive presidential election, the Democratic Party nominated a conservative from Delaware as its candidate. While in 1892 it had been Thomas Bayard, in 1896 Senator George Gray was the candidate. A supporter of President Cleveland, and a champion of sound money and relatively low tariffs, Gray allowed the Democrats to run a scathing campaign against the incompetence of the McKinley campaign (although, in keeping with the norms of the time, Gray himself did not personally campaign.) Senator Henry Davis of West Virginia was Gray's running mate.

However, the most notable aspect of the 1896 election was the rise of the Populists, led by charismatic crusading Congressman William Jennings Bryan of Nebraska, who had 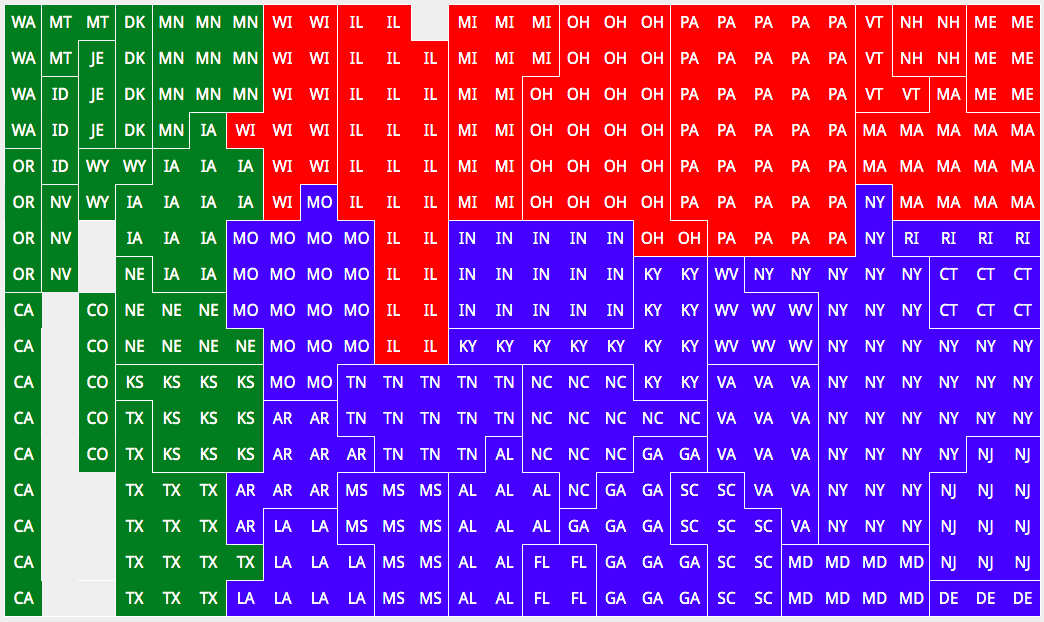 challenged Gray for the Democratic nomination, winning the support of many poor southerners and westerners, especially farmers. While the strength of the liberal conservative Bourbon faction denied Bryan a realistic shot at being the Democratic nominee, he was fiercely supported by the populists, and would sweep the western states, and perform surprisingly strongly in the south, although his pro-silver and pro-inflation views limited his appeal in the midwest and northeast.

As the electoral votes were counted, Gray came up just six votes shy of the majority needed to seal the election, losing California and Texas to Bryan by a narrow margin, when either would have been enough to seal the election outright, and also losing Ohio to Cullom by less than 1.5%.

The election was sent to Congress to decide. A Democratic majority in the Senate easily elected Henry Davis as Vice President, but the vote in the House between Gray, Collum, and Bryan was more fraught. It required multiple ballots before Gray was elected, with the defection of congressmen from California and Texas, who had initially felt bound to vote for their state's choice of Bryan, but were eventually persuaded by party loyalty to switch to Gray, who would be sworn in on March 4th as the first President from Delaware.

With Grover Cleveland having a successful two consecutive terms Presidency, I assume that he handled his secret cancer surgery much differently than OTL.

glenn67 said:
With Grover Cleveland having a successful two consecutive terms Presidency, I assume that he handled his secret cancer surgery much differently than OTL.
Click to expand...

I think that his OTL surgery was during his second term. So TTL, he would already be out office, and could probably have a more traditional (land-based) surgery. 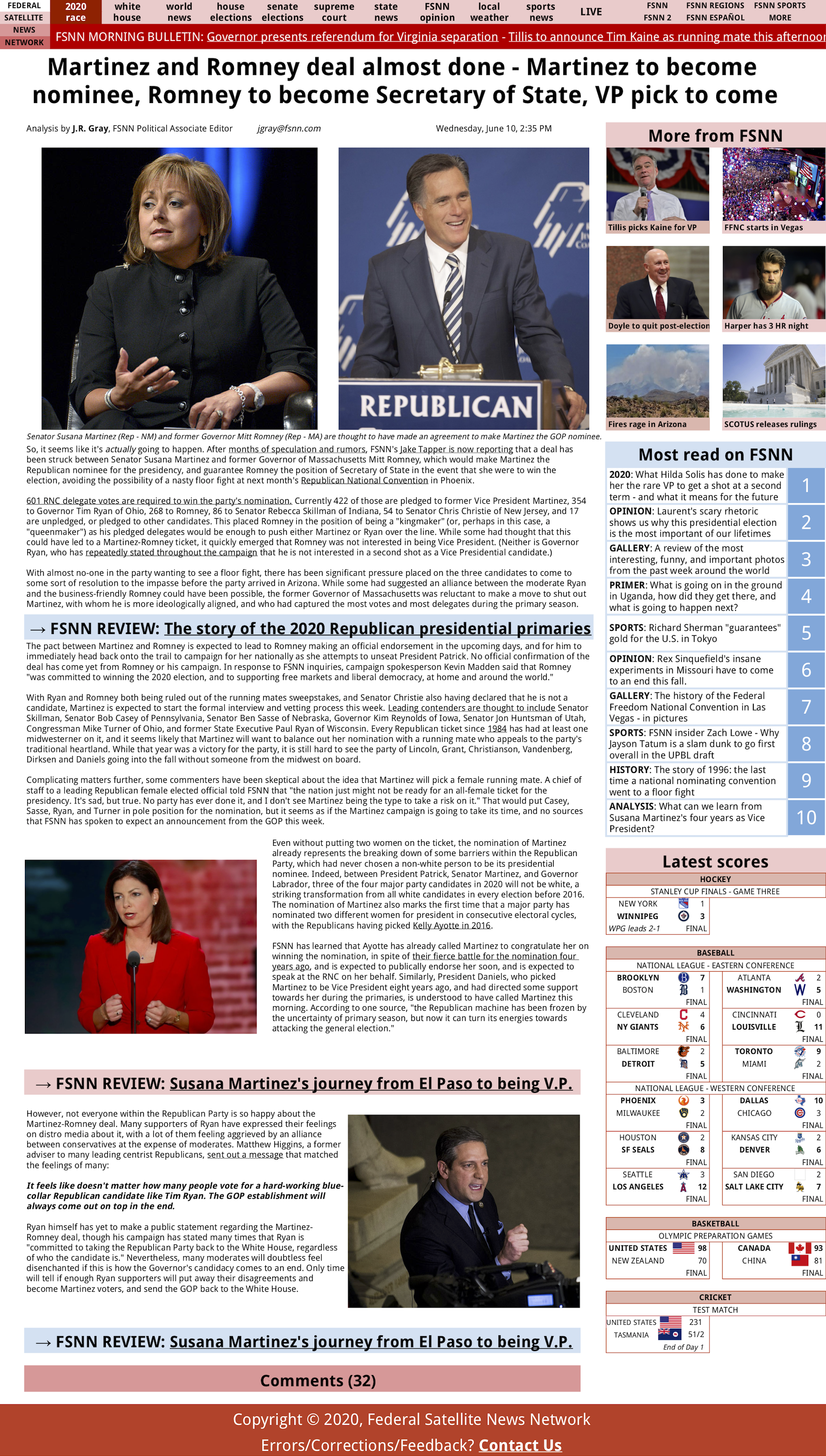 While the league grew in popularity throughout the 1950s, and was considered a rival to the National Hockey League as the continent's premier winter sport, it was struck by a series of scandals in the late 50s and early 1960s, culminating in the revelation that the 1958 and 1961 Eastern Conference Finals, 1960 and 1961 Western Conference Finals, 1959 and 1960 NBA Finals, and almost half of all games in the 1960-1961 season had been fixed by mob-linked gamblers, who colluded with players and coaches either to hit certain point spreads, or to outright throw games. Syracuse Nationals forward Ed Warner was sentenced to three years in jail for his part in the scheme, and famously testified at his trial that "fixing is everywhere in the NBA. I doubt there was a game played last year where there wasn't a player or coach who had outside instructions about how he should play the game." The Kennedy Commission, set up by the federal government to investigate in the wake of the scandal, found records of hundreds of fixed games, involving dozens of players and coaches, and the resulting prosecutions saw seventeen players and five coaches found guilty.

These scandals destroyed the league. The Nationals were forced to withdraw from the league mid-season in 1961, after forfeiting three games because too many of their players were implicated in the scandal for them to be able to field a team. The entire 1961 playoffs hung under the shadow of the fixing scandal, and players on both teams - even those with no known connection to the fixing - were booed and jeered throughout the Finals. By the summer of 1961, two more teams had gone into bankruptcy because of low revenues and high legal expenses, and the league itself decided to fold under the scrutiny of the Kennedy Commission. While the majority of the teams did not survive this process, some of them would become part of the American Basketball Association, and three - the Boston Celtics, the Philadelphia Warriors, and the Denver Nuggets - still exist today.

So why are the Cubs and brewers playing two different games against two different opponents in two completely different cities unless it's spring training?

What of Seattle ITTL?

BearBear91 said:
So why are the Cubs and brewers playing two different games against two different opponents in two completely different cities unless it's spring training?
Click to expand...

Because apparently you proof-read my pieces better than I do. Fixed.
Last edited: Jun 20, 2020 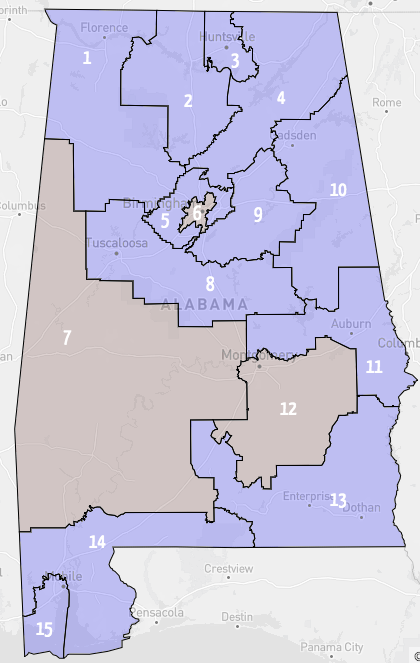 National Association for the Advancement of Colored People
You must log in or register to reply here.
Top
Top