Twists and Turns: An Alternate 1952 and Beyond

“You say that every year”


General Dwight D. Eisenhower’s announcement that he wasn’t going to run for president in 1952 sent waves through the Republican Party. Several Moderates and Liberals in the Republican Party tried to get Eisenhower to run, mainly because he’d be an effective resource in defeating the popular Robert Taft. When he announced that he wasn’t going to run, Taft’s nomination was all but secured. Liberal Republicans then tried to get popular Liberal Republicans like Thomas Dewey or even Wendell Willkie to run, just to stop Taft. In the end, only Earl Warren and Harold Stassen ran as Liberal/Moderate Republicans. Neither were successful in defeating Taft.


While the Liberal and Moderate Republicanswere unable to defeat Taft they were able to defeat his first choice for running mate. Taft originally wanted to choose Douglas MacArthur as his running mate, but a coalition of big-name Liberal and Moderate Republicans including Earl Warren, Wayne Morse, Margaret Chase Smith, Harold Stassen, Merlin Hull, Philip Willkie, Thomas Dewey, and the La Follette brothers stopped him. MacArthur’s support for McCarthyism, his conservatism, his feud with Truman, and the general conservatism of the potential ticket caused much controversy with moderates. After the moderate/liberal faction blocked MacArthur Taft decided to nominate Charles Halleck and he was accepted.


Meanwhile, the Democratic Party was having a nomination process of its own, despite the intense media attention on the Republicans. Originally Estes Kefauver was favored due to his domination of the Democratic Primaries. However, reformist and popular governor of Illinois Adlai Stevenson announced his candidacy. Stevenson won after three ballots due to support from all kinds of well-known Democrats. Stevenson was moderately sure that he’d win the south due to support from politicians like John Sparkman and Richard Russell. So, he decided to branch out and choose a less well-known running mate. In the end he chose Mike Monroney, in hopes that he’d appeal to more western areas of the south.


The election was extremely hard-fought. Stevenson attacked Taft on his isolationism (calling him “as dangerous as Henry Wallace”), support for McCarthy (although he did say he opposed Communism), and conservative economic views. Taft fired back, but it was clear that he was losing ground in the polls. In fact, many said that the only thing keeping Taft ahead was personal popularity, and even then things didn’t look so good. This was mainly due to Taft’s isolationism, which was growing very unpopular. 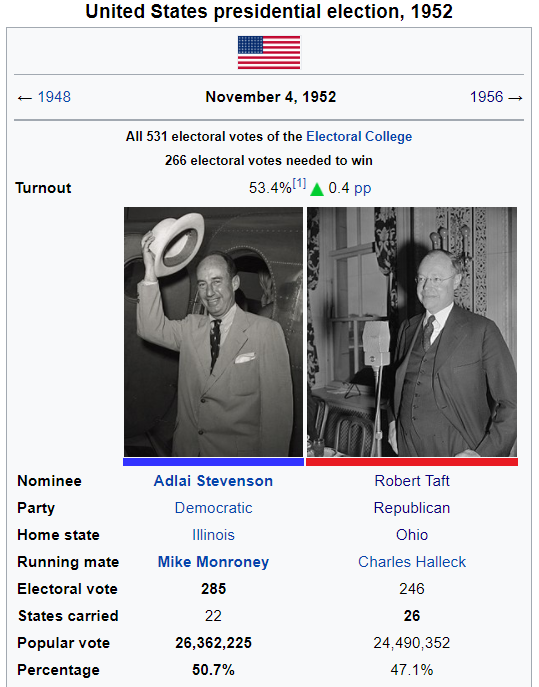 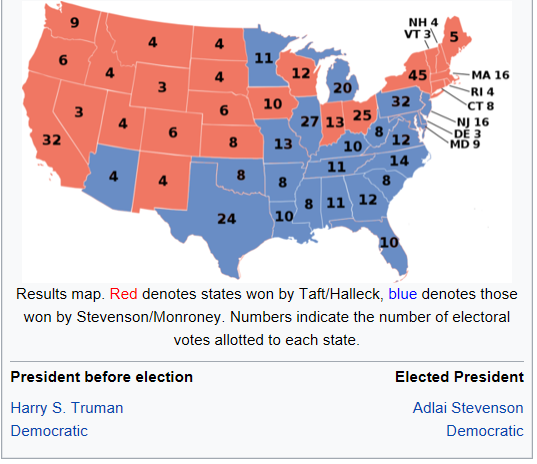 why i made this

Gentleman Biaggi said:
why i made this
Click to expand...

Great start, will continue to read!

Good to hear!
While this idea is a bit cliché, I will have some twists and turns that will change that
Update 2: 1952 Downballot

“If a certain moderate Republican hadn’t failed in his campaign, we’d have better coattails”

“How the hell is this my fault?!? You’re a Taft supporter!”

“Yeah, but even then he was too isolationist for America”

“Get your redneck buddies rallied up, they’ll unite behind those Assholes Brewster and McCarthy.”

“They’re not assholes, they’re trying to protect us!”

“Maybe it’s good that you failed.”


The Senate races of 1952 were hotly contested. While the Democrats had won the general election, that was mainly due to Taft’s isolationism. Most of the senate races were spent protecting vulnerable seats. The state of Michigan was very hotly contested. With incumbent Democrat Blair Moody only winning by 0.2% of the vote. While the fears of Democrats losing seats was real, they managed to gain some seats. Most notably was Massachusetts, which went to John F. Kennedy, son of businessman and ambassador Joe Kennedy. While the Democrats had a net gain, things didn’t look good, especially after their loss in Arizona.


The Arizona senate election was devastating to Democrats. Both House seats went Democratic and the state voted Truman. It should’ve been an easy win, especially with Majority Leader McFarland running. Instead, a young popular upstart named Barry Goldwater upset the Majority Leader. Goldwater was a very conservative libertarian and announced that he was “going to change things” in Washington. Time would tell if he proved successful... 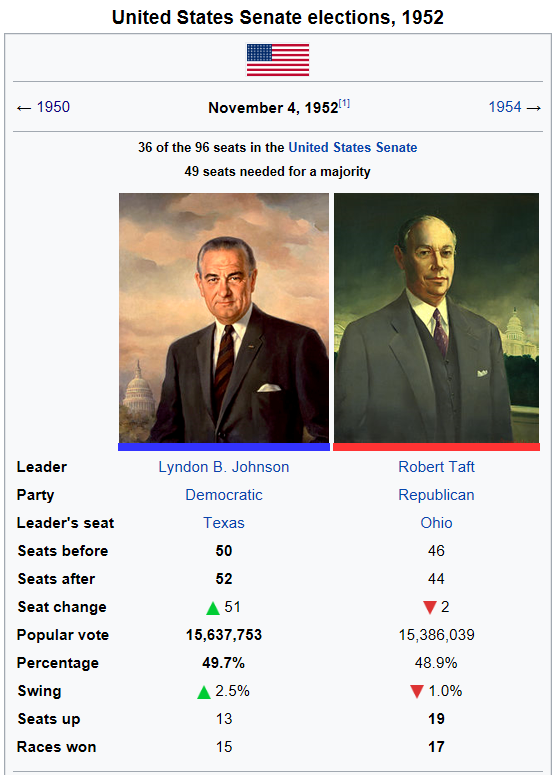 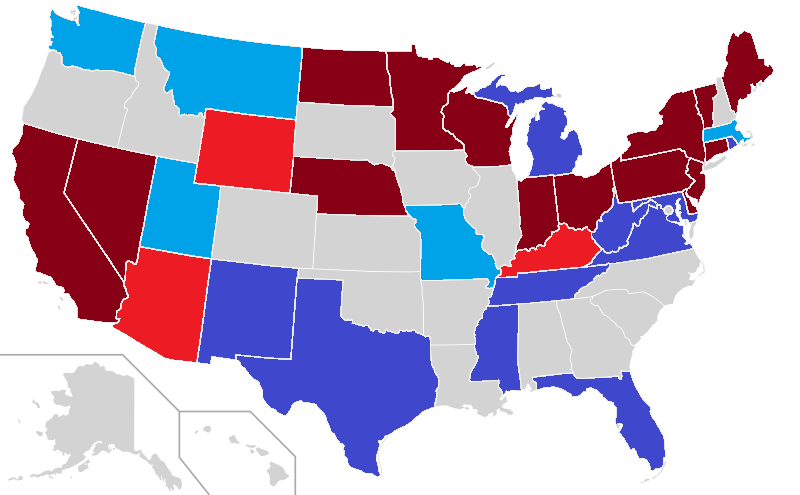 The House of Representatives elections were quite like the senate elections, except with less surprises. The Democrats kept a steady lead, and continued their majority. However, Republicans took new seats in New York and California. Not only that, but a few Republicans won seats in the upper south, causing fear in many a Democrat. One notable election was it Illinois, where future congresswoman and presidential candidate Phillis Schlafly lost a close race. She would come back in 1954 and capture the district. The Democrats also captured Independent Frazier Reams's seat, as Democrat and former Representative Thomas Burke won with 40% of the vote. 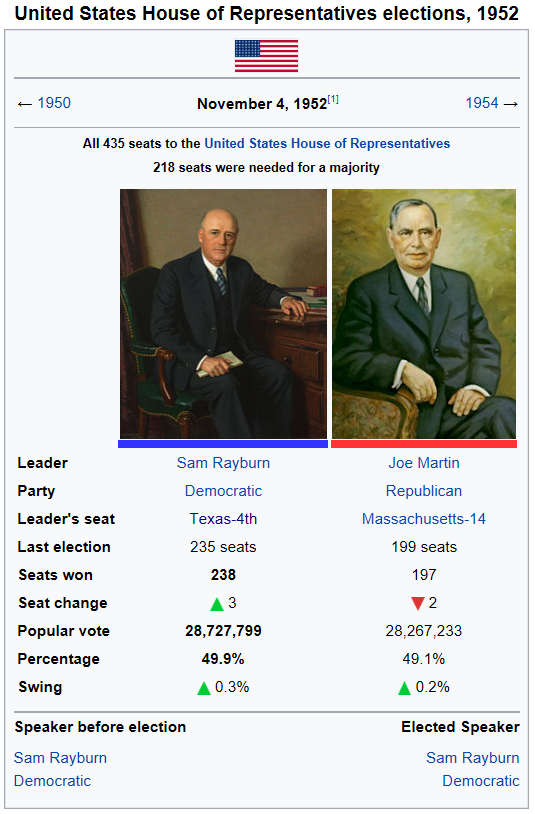 Stevenson began his administration with majorities in both houses. The question was, could he keep it?

Your Senate elections show the Democrats with a gain of 51 seats. I believe it should be 2?

Bughuntertf said:
Your Senate elections show the Democrats with a gain of 51 seats. I believe it should be 2?
Click to expand...

Yeah, sorry about that, I just realized the mistake and I will be fixing it now.

Banned
Spoilers for the next update:

Richard Nixon is possibly the New Hope of the Republican Party.

Richard Nixon is possibly the New Hope of the Republican Party.
Click to expand...

One of the most pressing issues going into Stevenson’s administration was integration. It was infamously split among political lines. The first battleground in 1953 was in the nomination of former senate majority leader and Arizona senator Ernest McFarland as Chief Justice. Stevenson’s decision to appoint him was controversial with many southern democrats, but McFarland was moderate enough on civil rights at the time and southerners believed that his time on the court could possibly be tilted towards the South. Not only that, but due to opposition by McCarthy several moderate Republican senators voted for Truman. Or as senator Margaret Chase Smith put it: “I support McFarland because McCarthy’s against him”. McFarland’s appointment was quite influential, as he managed to lead the decision to support school integration in Brown v. the Board of Education. Justices Reed and Jackson opposed the ruling, causing them to be hailed as heroes to the State's Right’s movement. A 7-2 result was quite controversial in the south and lead to resistance from many, most famously, Orval Fabus. 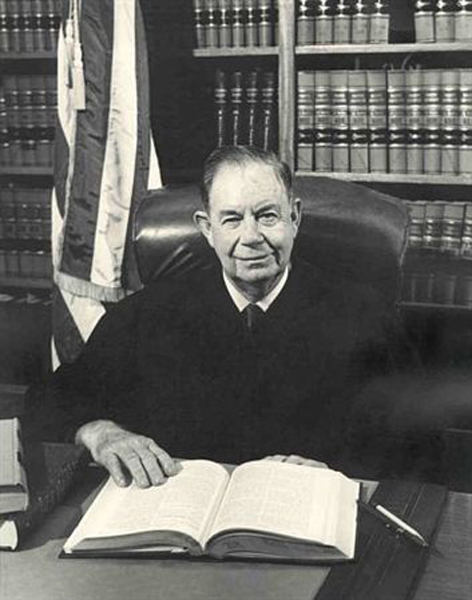 The second biggest issue at the beginning of the Stevenson administration was the growing power of the Mosaddegh administration in Iran. Fears that Iran was “quickly turning to Communism” were rising in the US and UK. Due to this Prime Minister Churchill and President Stevenson agreed to overthrow him. However, Stevenson used too much caution in preparing the coup d'etat, and it failed due to leaks. Much of the blame went to Stevenson with some going to the CIA. Not only that, but it made Mosaddegh paranoid and that would not end well. 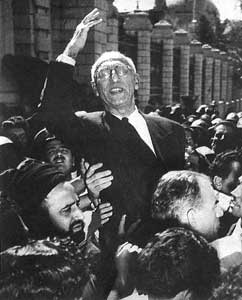 
The 1953 NFL championship was a battle between star Quarterbacks Bobby Lane and Otto Graham of the Detroit Lions and Cleveland Browns, respectively. The 1953 title would be known for having one of the most exciting endings ever. With the game tied 17-17 and the Detroit Lions on Cleveland’s 42 yard line with a minute left, Lane launched a pass to wide receiver Jim Doran and Cleveland DB Ken Gorgal picked off Lane’s pass. Gorgal ran the pass back for a touchdown and won the Browns the title. Gorgal would be remembered as one of the great NFL hero's of all time, although he was also remembered as a “one shot wonder” for never having another heroic moment of that caliber. 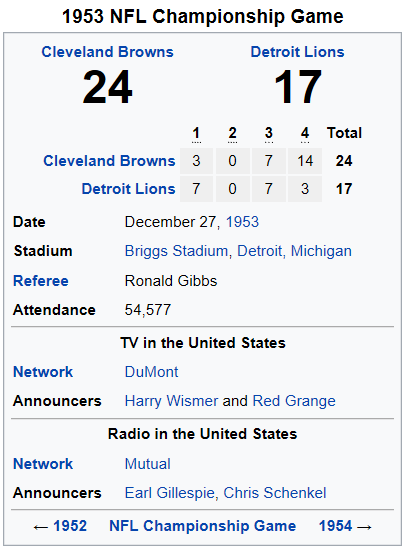 Loving it thus far. You had me at Chief Justice Harry Truman.

Meyer London said:
Loving it thus far. You had me at Chief Justice Harry Truman.
Click to expand...

Thanks.
Honestly I was too lazy to think of a good replacement for Earl Warren, so I chose Truman
Last edited: Dec 21, 2017
Update 4: Robert LaFollette Jr.

“Mr. Lafollette, there is evidence to support that you have had Communists on your staff and because of this, we feel that it is not in America’s or the United Kingdom’s interests to have you as ambassador.”

“Senator McCarthy, I do not mean to offend your humble background. But, this beautiful country has given me and my family plenty of opportunities. My father was a senator, governor, and representative. My brother was a two-term governor, and I was a senator until you defeated me. Now, after this country has blessed me and my family so much, why would I want to give it, or one of its biggest allies to Khrushchev?”

“I see, now do you think that President Stevenson’s choice to appoint you was to show opposition to my patriotic and justified crusade against Communism?”

“Joe, if that is truly the case, then that should give all of you reason to approve me.”


One of the most controversial appointments to Stevenson’s cabinet was Robert LaFollette Jr as ambassador to the United Kingdom. He was a former Republican, and a liberal one at that. His shot at McCarthy made him unpopular with Conservative Republicans and his Republicanism made him unpopular with partisans. However, Senate Majority Leader Johnson doing anything short of beating Strom Thurmond to death with a stick to get LaFollette through and McCarthy’s falling popularity helped LaFollette slip through the senate. It did not make him popular, and it made him an easy target for conservatives, but he got through.

“You can barely dent our system of economic success and prosperity”


The 1954 midterms were supposed to be a Republican victory due to fatigue from Democratic domination since 1932. Like the predictions from six years earlier, they would be wrong. While the Republicans gained a seat in the senate, the economy was doing well, and few to none Southern Democratic voters switched sides. The Democrats retained their lead in congress and hoped to pass more Democratic legislation. 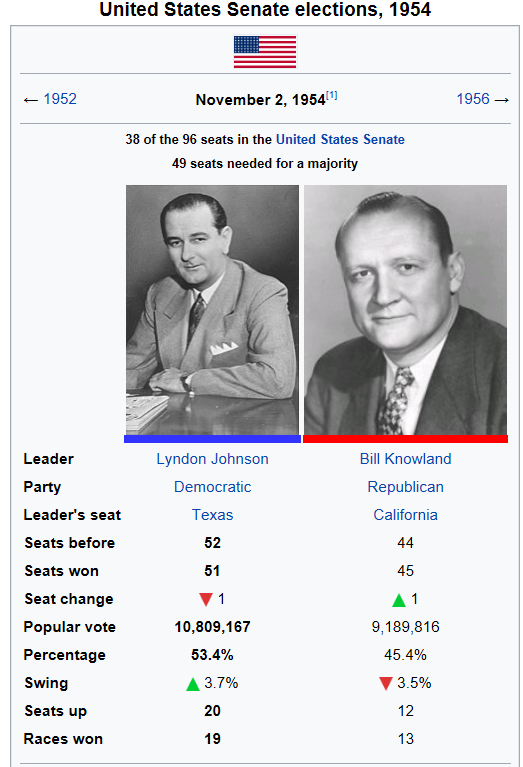 The House of Representatives also produced less change. The election was notable for adding Phyllis Schlafly and re-adding Independent Frazier Reams. Reams was an Independent caucusing as a Democrat, but he lost to a fellow Democrat in 1952. He returned as an Independent in 1954, defeating the man who beat him two years ago, Thomas H. Burke. The Republicans gained seats, but Rayburn continued his Speakership. 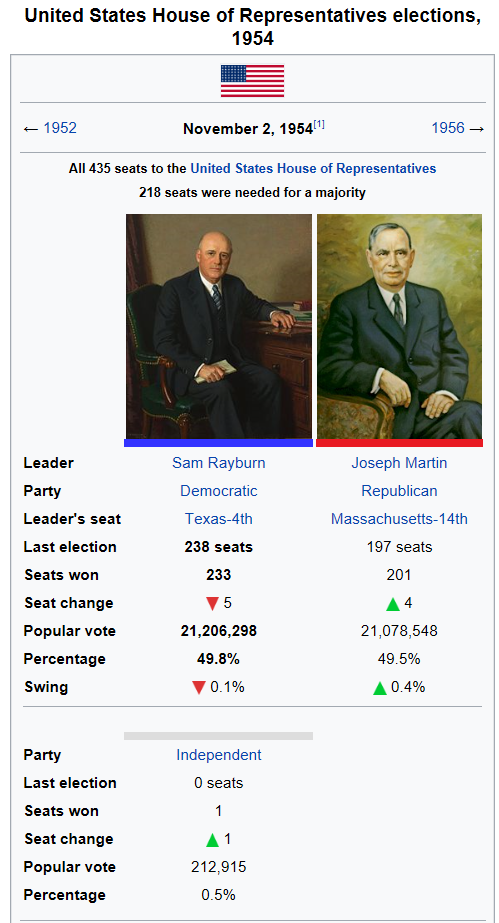 The Democrats retaining power lead to a re-evaluation of their election strategy. By 1956 Republican anger was rising and 1956 presidential candidate <REDACTED> spent much of his campaign campaigning with Congressional candidates, in order to finally get Republican Legislation passed. The future prepared for Congressional battles between Republicans and Democrats.

(Sorry this update was short, the next one will be much longer)
Threadmarks
You must log in or register to reply here.
Top
Top