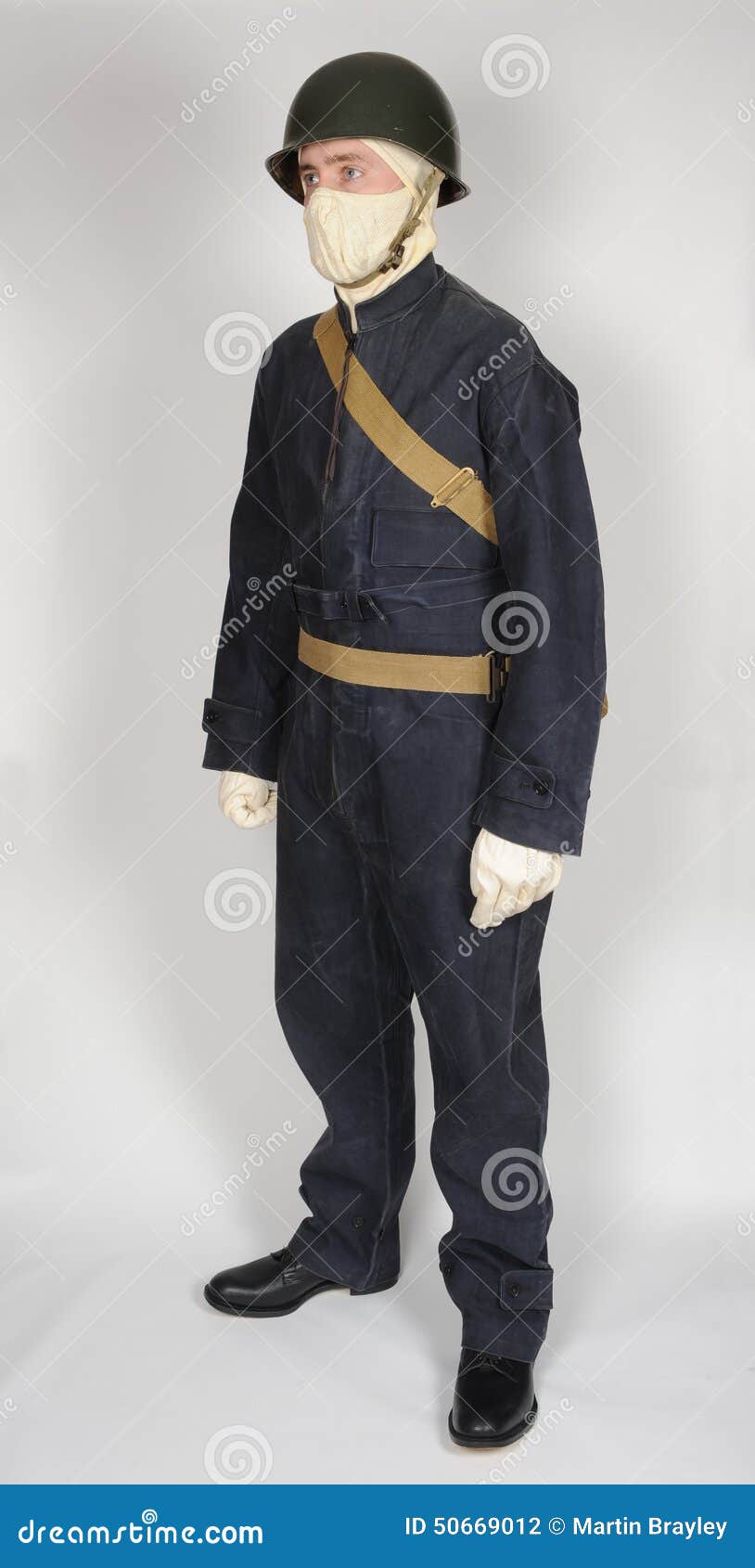 I had just found this which pretty much illustrates what I imagined what a Confederate Navy Sailor's battle dress would look like. With a jump suit, anti-flash hood and gloves, and a Sydenham helmet. 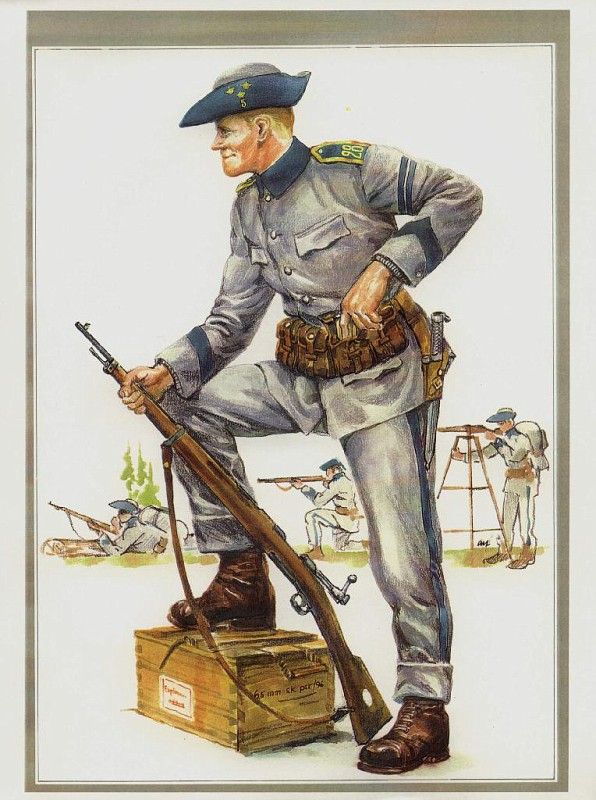 Cool where did you find that picture?

Virginia Liberal said:
Cool where did you find that picture?
Click to expand...

Found it over here.

S. Marlowski said:
That uniform could also work as a ceremonial/walk out dress uniform
Click to expand...

True. I just remembered there being a mention of National Guardsmen wearing grey uniforms during the black uprisings, in the Great War Trilogy. Though yeah it definitely feels like the type of ceremonial dress uniform the Rebs would wear, trying to evoke the Revolutionary War and War of Secession.

Soundwave3591 said:
Hitler didn't contribute much to Naval construction because
A: the needs of the ground war demanded the largest allocation of resources and
B: Germany has never been a major maritime power in any case: the High Seas Fleet was more an aberration born of the Kaiser's desire to one-up the UK.

Not to mention the CSA has advantages the Kaiser and Hitler could never have dreamed of:
1: The Nigh-unlimited resources of a country that controlled more land than all of Western Europe (with Texas alone the CSA would certainly never want for oil the way Germany did, for example)
2: a Two-Ocean trade sphere that would demand protecting in a philosophy that, if not Mahanian, would certainly dictate the assets for a two-ocean navy
3: Overseas possessions right on their doorstep in Cuba and their Caribbean holdings that, again, need protecting
4: Cooperation with the British and French navies to maintain trade spheres and interdict Central powers shipping: the UK can keep the German Navy bottled up in the Baltic, But the US navy and the USA's regional allies would still need to be matched.

not to mention, iirc in the American Empire trilogy Sam Carsten comments that the CSA was stripped of her Battleships and Heavy cruisers after the First Great War, so at the very least the CSN at one point HAD Dreanoughts and the like, and thus had the means to build battleships, or at least service and maintain them.

Mind you, i do agree with you to a point: my take on the CSN has them buying Battleships from the French, while the largest ships they build are Heavy Cruisers akin to the Graf Spee, as well as an unfinished attempt at an Aircraft Carrier.

Reminds me of a Richelieu Class with a third turret. 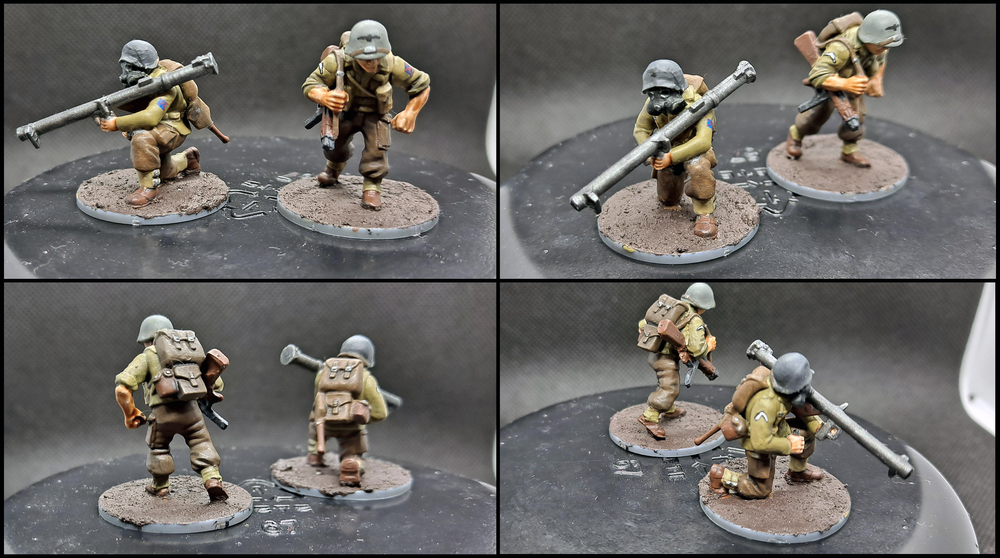 Very Nice! I like the models here, as well as the insignia.

Alterwright said:
Reminds me of a Richelieu Class with a third turret.
Click to expand...

Good to see you again, long time no see. 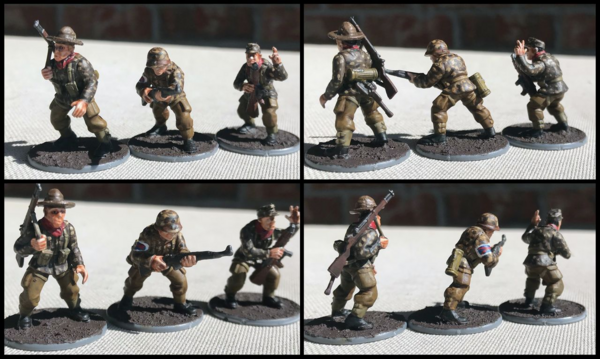 These are looking very cool. I like the scarf and boonie hat on the other one there. Very southern looking. Reminds of a picture I saw once with Confederate soldiers.

I really like these. Very nice designs too. I hope you do more. The only Confederate medal I've seen that could also be potentially used as a real award is the Confederate Cross of Honor, established by the Untied Daughters of the Confederacy in 1899. 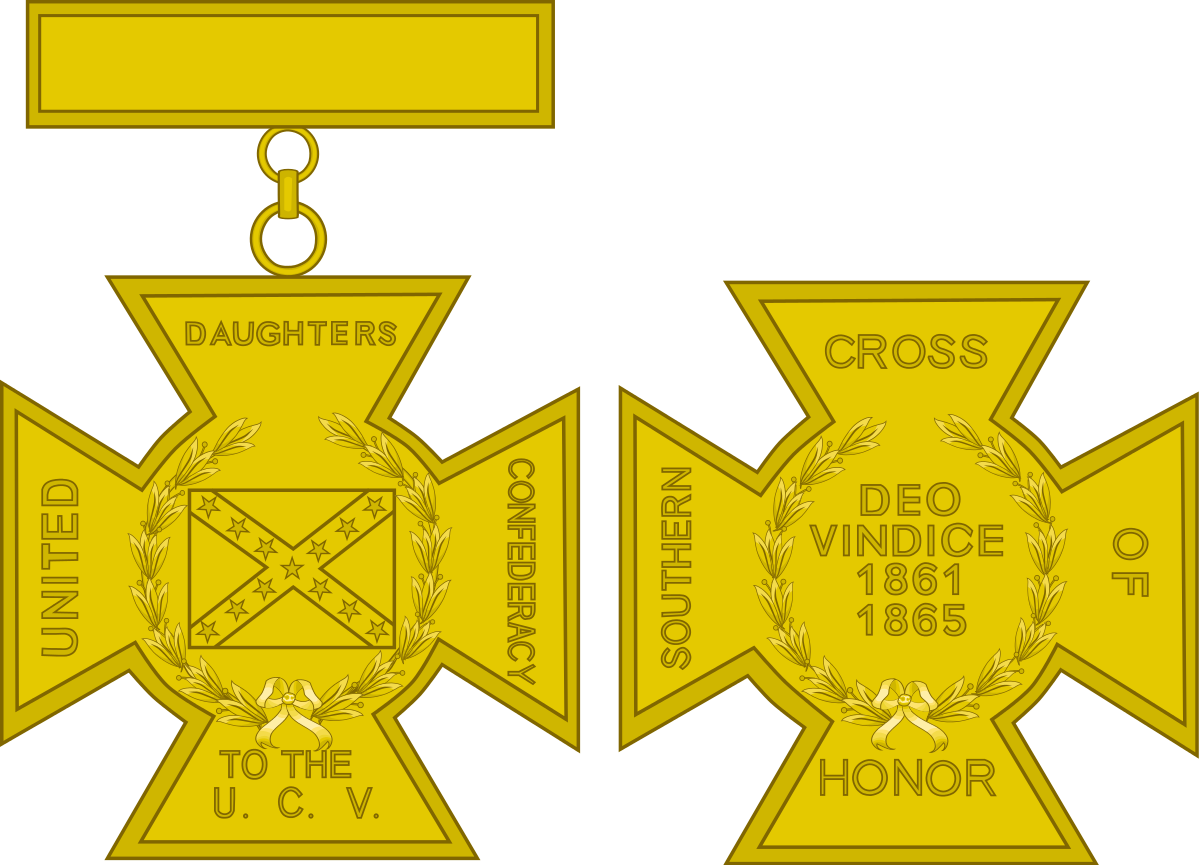 In the spring of 1944 the Confederate States of America was facing certain defeat but CS President Jake Featherstone refused to accept the reality of the situation and continued to draw up new battle plans and ordering new weapons systems into production, there were few in the CSA who tried to get him to see reason.

Great Britain for one did all they could to encourage the CS leader that all was not lost and continued to share new technologies and weapons with their CS ally.
One new weapon that was given to the CS was the long barreled 77 HV cannon, Featherstone immediately ordered a new barrel be designed to take the gun and be put into production as soon as possible.

The new barrel was designed with as much proven technology as the CS had accumulated during the war but their was debate over which tech's to use which to forgo but in the end a considerably decent medium barrel was built and was accepted into service in late 1944.
CSA President Jake Featherstone was known for not being one who reveled in the glorification of the Generals of the War of Succession but in spite of this (or perhaps because of it) the new barrel was dubbed the "M9 Gen. Jackson" and was nicknamed the "Stonewall" by CS troops.

It was rumored after the war by those of the High Command that survived the war that Featherstone after learning of the new barrel's name, proclaimed that this was the final act of betrayal by his unfaithful and unworthy countrymen.
View attachment 548730
Click to expand...

The nickname evokes a sense of it being a slow, yet very heavily armored tank. I like it.

A bit of an update to my Confederate Air Force Sheet. I redesigned the "Alligator" and gave them some more appropriate company names.​
Click to expand...

The Hound Dog here is probably one of my favorite designs. Its yellow nose, camo, and roundel, make it stand out, and its allusion to both the BF-109 and Spitfire make it look like a fearsome plane.

Alterwright said:
The nickname evokes a sense of it being a slow, yet very heavily armored tank. I like it.
Click to expand...

Hey look who's back from the grave, thought the covid had got you!

cortz#9 said:
Hey look who's back from the grave, thought the covid had got you!
Click to expand...

Alterwright said:
These are looking very cool. I like the scarf and boonie hat on the other one there. Very southern looking. Reminds of a picture I saw once with Confederate soldiers.
Click to expand...

Yep, these (and the CS Army guys) were explicitly based on some art I saw.

rvbomally said:
Yep, these (and the CS Army guys) were explicitly based on some art I saw.
Click to expand...

Kinda reminds me of these pictures here. Either way, good job! 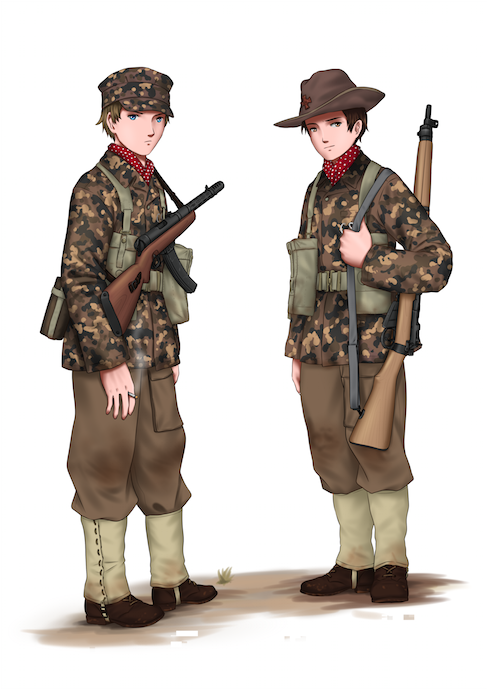 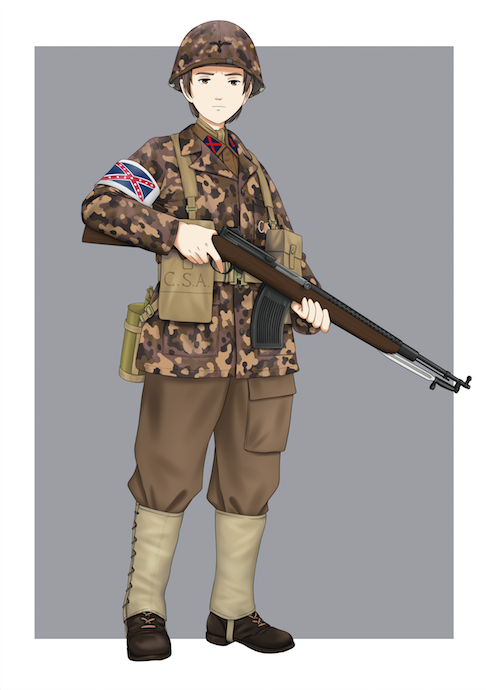 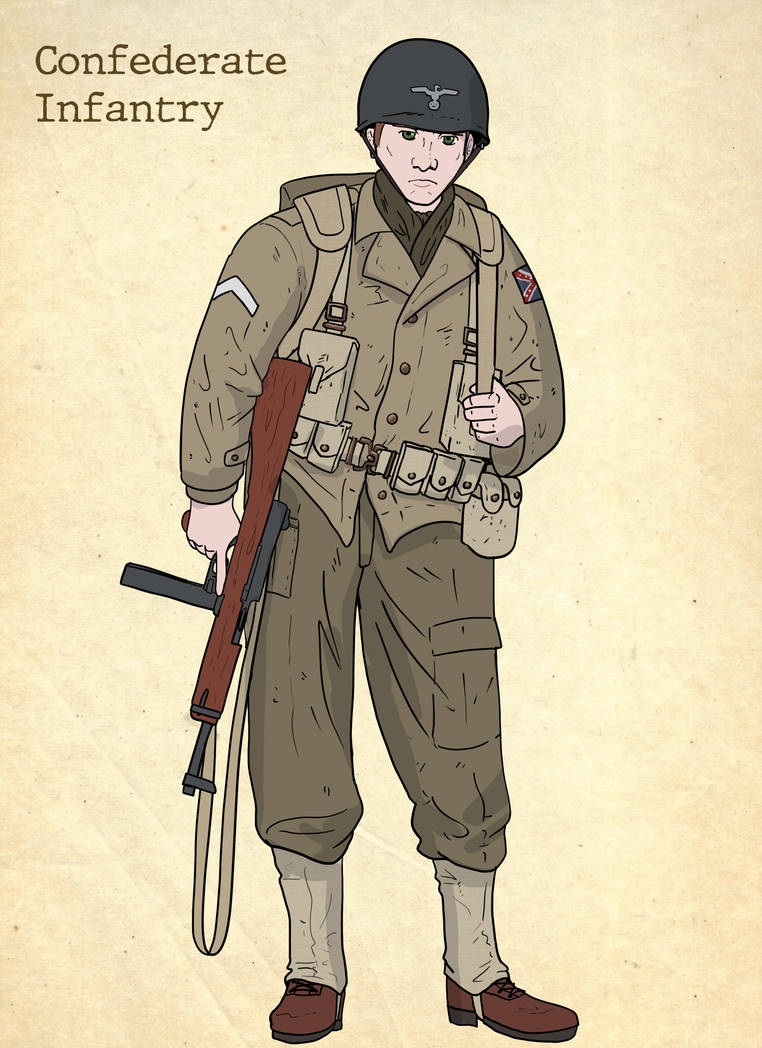 Alterwright said:
Kinda reminds me of these pictures here. Either way, good job!
Click to expand...