Now here's a revision to my Headcanon of the SGW era Confederate States Navy;

After the end of the First Great War and the subsequent Treaty of Arlington, the Confederate Navy's battleship forces was cut to 5 Pre-Dreadnaught battleships and was forbidden from building new battleships. During the time from 1918 all the to 1935, the CSN however would draw up some designs for future capital ships. In June of 1935, the new Freedomite Government and the US Government would make the 1935 North American Naval Agreement, which lifted many of the restrictions laid by the Treaty of Arlington. Later that year, Featherston would approve for the CSN's plan for 3 new battlecruiser and had decided to go to the French for assistance in constructing them. This class in question was designated as Project 346 and were designed to serve as commerce raiders in the Atlantic.

CSS Jefferson Davis (B23) - The CSS Jefferson Davis would be ordered from the St. Nazaire Naval Arsenal along with one her sisterships in December of 1935 and was laid down on March 28th, 1936. The ship would be launched on August 9th, 1938 with Jake Featherston* attending it's launching ceremony and was ultimately completed by the Spring of 1939. The CSS Jefferson Davis would be commissioned into the Confederate Navy on April 16th, 1939 shortly after reaching Hampton Roads in Virginia and was made the flagship of the Confederate Navy's Atlantic Fleet. On the outbreak of war in August of 1941, the Jefferson Davis along with a few other Confederate warships would take part in the Anglo-Confederate operate to capture Bermuda and after that, would take on anti-shipping duties in the North Atlantic. Between September 1941 and February of 1942, the Davis would sink a total of 87,000 tons of shipping in the North Atlantic and would also sink the Union destroyer USS Pope. On February 5th 1942 while on an anti-shipping sortie in the North Atlantic 320 miles off the coast of Newfoundland, she and the accompanying heavy cruiser CSS Texas would encounter the Union battlecruiser USS Saratoga and two light cruisers, and in the engagement, the Davis would destroy the Saratoga and damage the cruiser USS Helena. After the engagement, both the Texas and the Davis would break off and planned to link up at Bermuda again, but this was not to be. 2 Days after the Battle of the Labrador Sea, she would be spotted by an SBD Dauntless from the USS Enterprise and the carrier would launch an air attack against the Davis which would prove to be successful in slowing the ship down to 15 knots. Hours later, a certain Task Force 38 would catch up to her, which had the battleships Washington, Michigan, Dakota, 2 heavy cruisers, and 3 destroyers and after a 2 and half hour engagement, would be sunk by the Union ships.

CSS Robert E. Lee (B24) - In December of 1935, the CSS Robert E. Lee would be ordered from the St. Nazaire Naval Arsenal alongside the Jefferson Davis and would be laid down on April 29th, 1936 and would eventually be launched on November 7th, 1938. The Lee would be completed in September of 1939 and would be commissioned into the Confederate fleet later that month. When the SGW began, the Lee would be at port in Charleston and she would eventually be sent out on commerce raiding activities. Between September of 1941 and July of 1943, the she would sink a total of 178,000 tons of shipping and also the US Navy light cruiser USS Springfield in late 1942 off the coast of Iceland as well damaging several other German and Union warships. In July of 1943, the CSS Robert E. Lee alongside several other Confederate Naval vessels would make an attempt alongside the Royal Navy to prevent the Union forces from recapturing the island of Bermuda, which the second battle there would end in a Union victory. In the spring of 1944, the CSS Robert E. Lee alongside a force of several Confederate surface vessels would make a breakout attempt from Hampton Roads to Tampa under Nimitz's and Featherston's orders and on the night of May 26th, would set sail. Unbeknownst to the Confederates, the Union Navy would learn of this and would have a force comprising of the Battlecruisers Lexington and Constellation, the Battleships Wisconsin, Maine, Nevada, and Washington, 1 heavy cruiser, and 5 destroyers laying in wait nearby. In the resulting battle, the Lee, though fighting like a mad dog, would be sunk alongside most of the other ships accompanying her. The Battle off Currituck would be last major confrontation between the Union and Confederate navies as well as the last battleship-on-battleship action in the history of naval warfare.

S. Marlowski said:
Superbomb tests in the Southwest Pacific in 1945 along with other former CS Navy vessels and old US ships, where she would sink after the second test.
Click to expand...

cortz#9 said:
Ah a post war prize, I can easily see that.
Aside from the national emblem are there any particular colors you'd like to see?
Click to expand...

Don't know. When I read your reply a frankly slightly insane idea crossed my mind! namely that the colors are that of a company logo

Pangur said:
Don't know. When I read your reply a frankly slightly insane idea crossed my mind! namely that the colors are that of a company logo
Click to expand...

Maybe I should use the colors of McDonalds logo?

cortz#9 said:
Maybe I should use the colors of McDonalds logo?

Why the heck not?

Why was the third Battlecruiser named Sharpsburg? I thought that battle never took place and instead the Battle of Camp Hill decided the War of Secession?

Pangur said:
Why the heck not?
Click to expand...

Here is trio of my interpretation for the Hughes Hound Dog. (which I have for the most part made them completely from scratch. 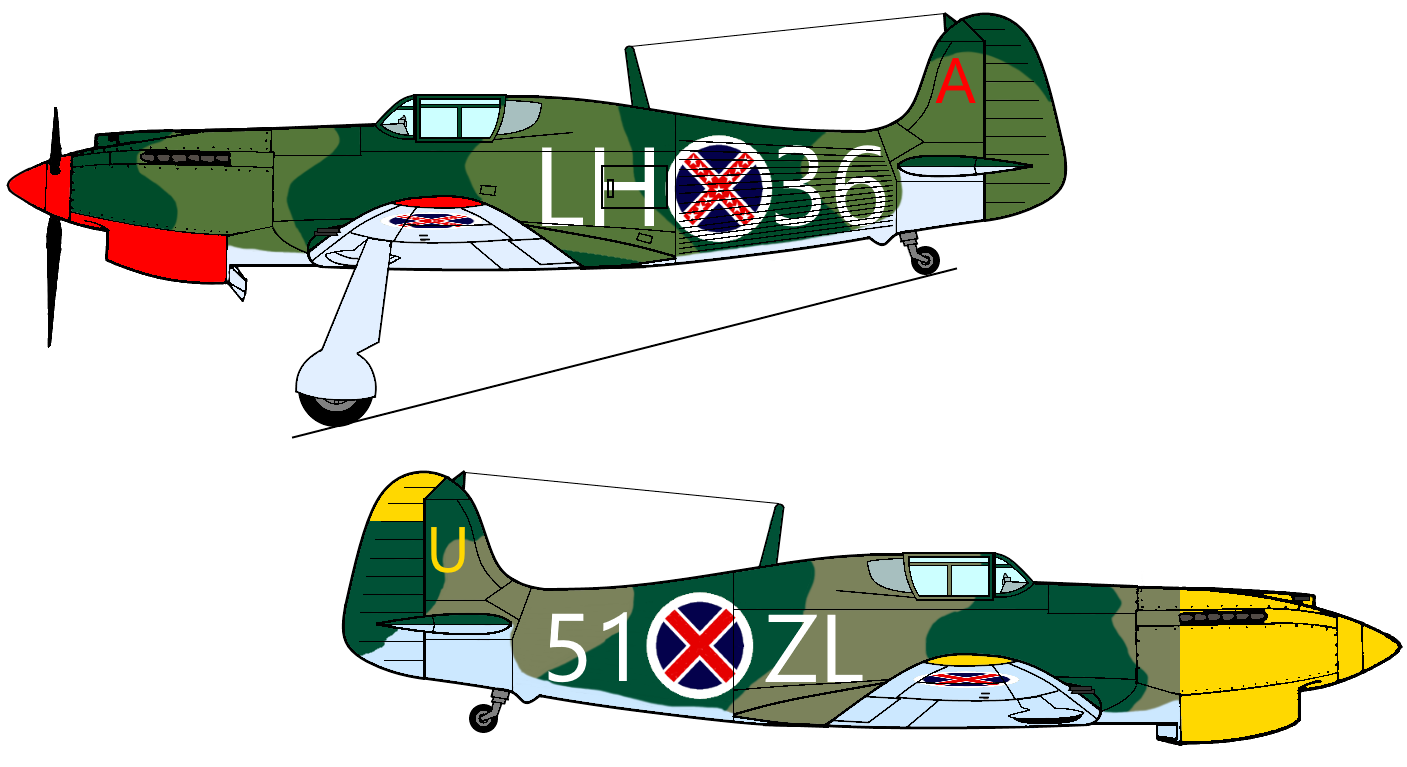 A Hughes H-38G-2 Hound Dog fighter from an unknown squadron based in Mississippi, circa June of 1944. Note that the aircraft has received a crude paint job as well as it's underneath with a bare metal texture. The Hound Dogs from the F models onwards would receive a licensed copy of the British Rolls Royce Merlin engine as well as two 20mm Hispano-Suiza Cannons, and an even simplified airframe and a bubble canopy. This particular plane was found abandoned on a roadside by the US Army and is currently being restored to flying condition by the Flying Heritage & Combat Armor Museum in Everett, Washington.
Last edited: Nov 10, 2020 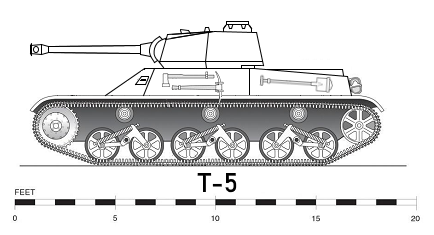 The T-5 Keg was a further development of the T-4 which had featured a newly designed turret which housed a 47mm High Velocity M1942 cannon and a co-axial M1937 "Ripper" machine-gun. The design also featured sloped armor which was inspired by the Union M2 Custer. The T-5 had a crew of 4 much like the earlier T-4 design, a driver, commander/radio operator, gunner, and loader and it also used the Horstmann Suspension much like the earlier Confederate Kegs. The vehicle would first see service with Confederate forces during Operation Rosebud in late 1942 in Ohio, in which it served well as it was intended and by war's end, a total of 845 T-5's would be built an all of them would be used by the Confederacy.

An early production Hughes H-37A-3 Hound-Dog fighter from the 2nd Fighter Squadron based out of Nashville Tennessee, circa 1937. The early Hound-Dogs from the prototype Type-62, the preproduction A-1 models, and the production A-2 to 4 version would feature two 7.7mm Tredegar machine-guns and was powered by a licensed copy of the Rolls Royce Kestrel engine that was made by Stovall. Total of 343 of the early models including the prototype and the 12 pre-production airframes would be built and would be replaced the B-1 models with the Bristol Pegasus engine and the H-38C-1 variant with the Lincoln LMB-22 engine. 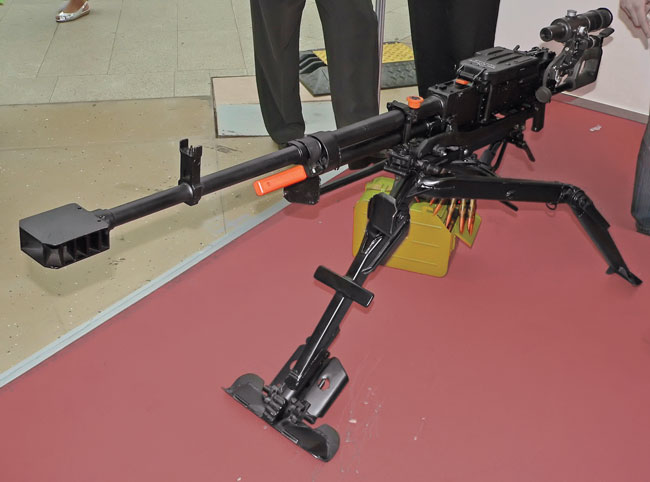 A Marlin Arms M1938 .50 Caliber Machine gun, seen at a post-war Arms exhibition.
Developed to replace the venerable but aging Vickers-Tredegar Model 1909 in CSA service, the M1938, in a break from CSA norms, adopted the increasingly common Browning .50 caliber cartridge that was also seeing service with the USA's M2 HMG, being one of the few weapons in the CSA's arsenal that shared common Ammunition with a Union counterpart.
Initially, this served the CSA well, as the weapons could make use of captured union ammunition during Operation Blackbeard, where it was the most common Machine gun being used by Confederate Barrel divisions for anti-aircraft use, as well as variants mounted on CSA aircraft. Even as the tide of the war turned against the CSA, the guns proved eminently useful in the defensive war the CSA was forced into fighting, as hardpoints centered around the guns forced Union troops to increasingly rely on Barrel and Aircraft support to advance.
After the War, captured weapons were initially retained in occupation service, before being sold on to American allies, such as Quebec, Brazil and Chile, to modernize and bolster those nation's weaponry. The guns can still be found in service in parts of the world today, and have been reverse-engineered by a number of nations, in particular Russia and South Africa.
Last edited: Nov 14, 2020