The Yankee Dominion: A Map and World Building Project

@ST15RM I think Virginia Beach has a Reform MP if I'm not mistaken.

VT45 said:
Did you use the North America base map that I posted in the Blank Map Thread?
Click to expand...

no i am using chicxulub's county bam.

you know what i may just use your map @VT45 because it'll take less work and the original map doesn't have a projection listed because i guess the government's stupid. but that's beside the point.

It looks like it's the same projection as the one I posted in the Base Map Metrication thread, just in a different scale.

so guys i have this idea, so we know that russia had a civil war, and putin isn't in russian politics, well i think during the russian civil war, putin's parents move to alaska with vlad, and eventually he ends up in politics and, well i think you can see where this is headed...

So here's an idea? What if Hitler's parents moved to Wisconsin and Hitler became an MP at one point. (Probably not PM or anything, but an MP.)

PNWKing said:
So here's an idea? What if Hitler's parents moved to Wisconsin and Hitler became an MP at one point. (Probably not PM or anything, but an MP.)
Click to expand...

I don’t really like that idea, tbh. What’s wrong with just killing him off in a war or something?

@ST15RM - I think I found a little solution to the fact that the County-BAM doesn't extend into Canada: 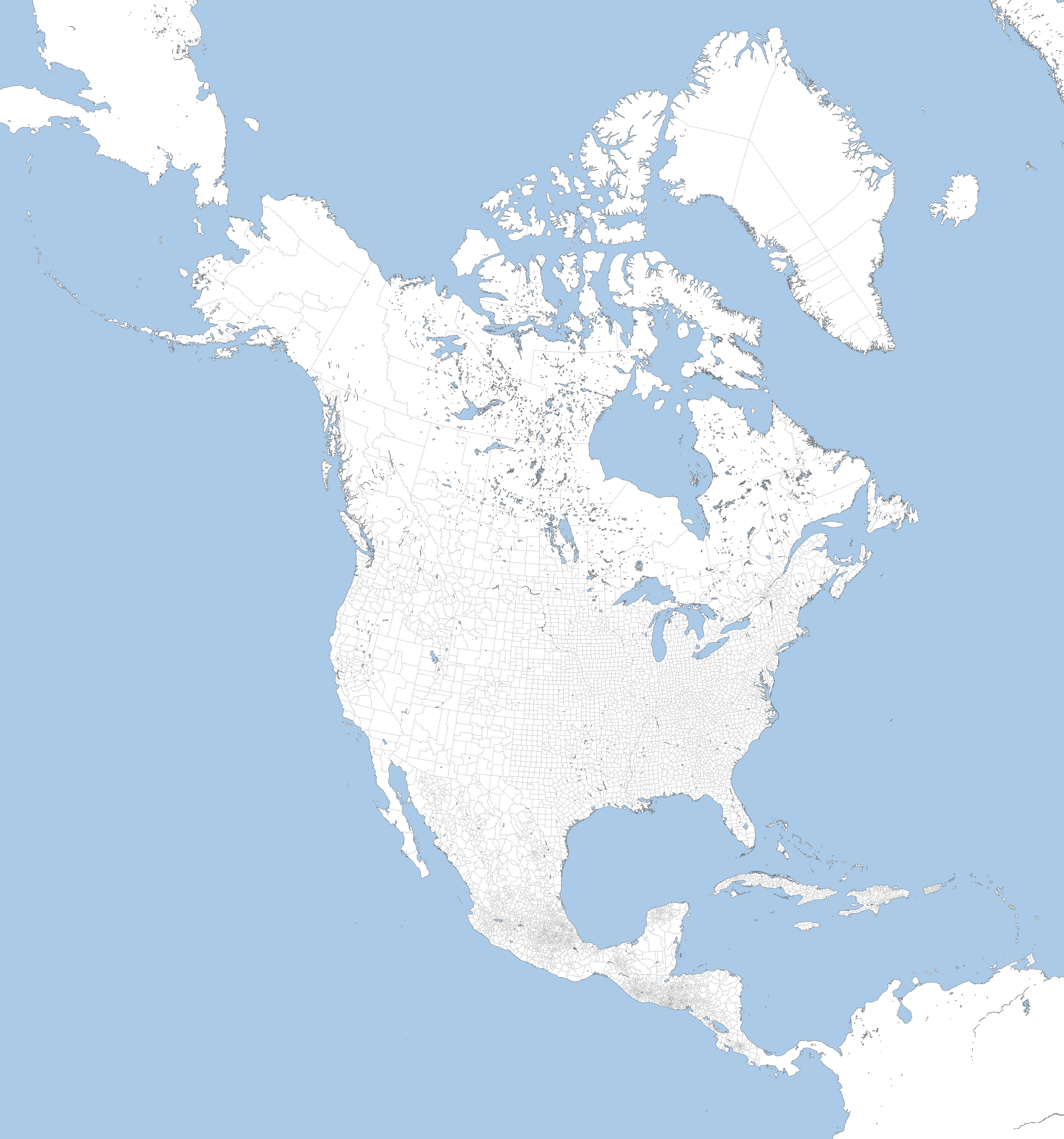 Gian said:
@ST15RM - I think I found a little solution to the fact that the County-BAM doesn't extend into Canada:
Click to expand...

ok here's my take on them:
rockefeller: standard oil still rises, but under TR is broken up. rockefeller ultimately becomes a donor/philanthropist and his family and once lovecraft takes over the progressive party he helps fund him until his death in '37
FDR: never gets into national politics but does become the premier of new york. he is pro-EPIC, and is widely respected but perhaps not to the extent he is iotl
JFK: he becomes a senator from mass in the 60s and doesn't get assassinated. he dies in 2003.
harriman: another ny governor probably.
dawes: serves under the coolidge ministry in some high-level job, but not deputy pm.
Biden infobox New

alright so i'm taking a page out of @Goweegie2's playbook and doing all the atl versions of the otl 2020 presidential candidates.
starting with ol' joe:

Joseph Robinette Biden Jr. is an American politician serving as the Leader of the American Senate since 2008. Biden was raised in Scranton, Pennsylvania, and New Castle County, Delaware. He studied at the University of Delaware before receiving his law degree from Syracuse University. He became a lawyer in 1969 and was elected to the New Castle County Council in 1970. He was appointed to represent Delaware in the Senate by Pierre Trudeau in 1973, and became Leader of the American Senate after jack Layton became prime Minister in 2008.
Last edited: Monday at 10:19 PM
Sanders infobox New

Bernard Sanders (born September 8, 1941) is an American politician who is the current Minister of Labor since 2017, was Minister of the Environment from 2013-2017 and has served as a member of the American Parliament for the riding of Brooklyn North-Long Island City since 2007. An advocate of social democratic and progressive policies, Sanders is known for his opposition to economic inequality and neoliberalism. On domestic policy, he supports labor rights, universal and single-payer healthcare, paid parental leave, tuition-free tertiary education, and an ambitious Green EPIC to create jobs addressing climate change. On foreign policy, he supports reducing military spending, pursuing more diplomacy and international cooperation, and putting greater emphasis on labor rights and environmental concerns when negotiating international trade agreements.
Last edited: Wednesday at 10:43 AM
Buttigieg infobox & Wabash Election New

this one's a double whammy: premier pete and the wabash political system.

Peter Paul Montgomery Buttigieg is an American politician and who is currently serving as the Premier of Wabash since 2019, earning the nickname "Premier Pete". He represents the riding of South Bend North in the Wabashian Parliament since being elected in 2012. Buttigieg came out as gay in 2015 and is the first openly gay premier in American history. 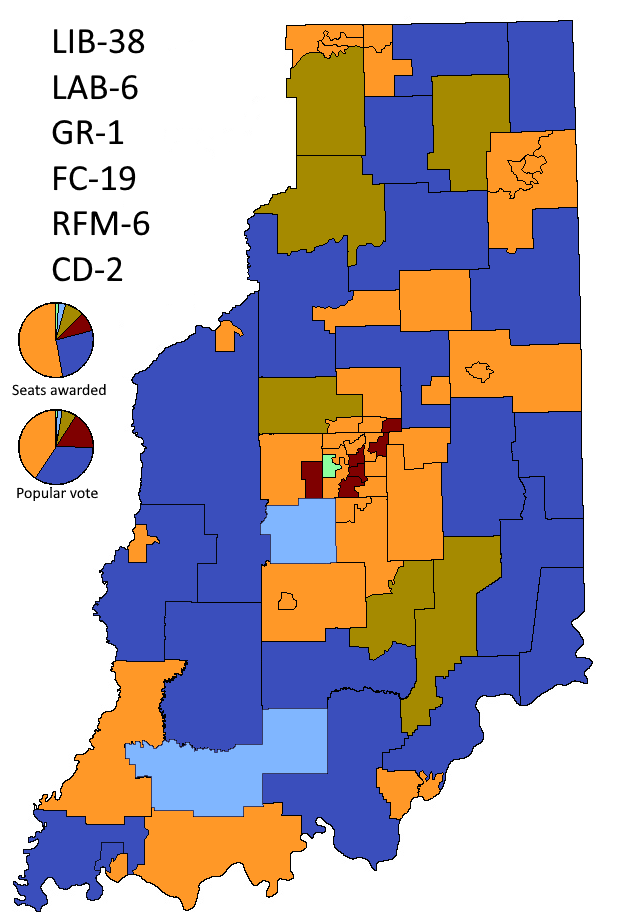 here's the most recent election, which was a landslide for the liberals.

okay so there are still a lot of provinces and territories that need systems, maps or both 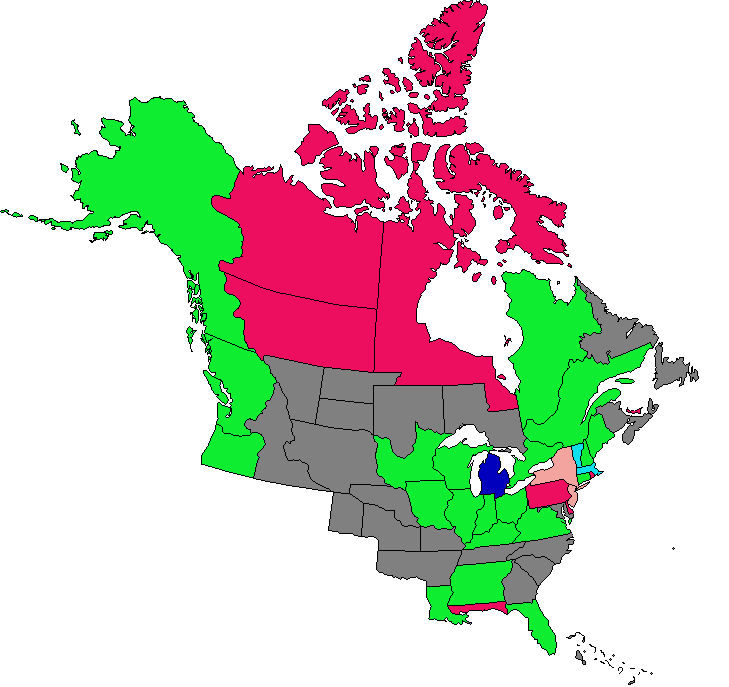 this is, to my knowledge the states of the provincial party systems so far.
green - map and system
light blue - mapped, but no system or system not attached to map
dark blue - map and system, supposedly had an election in 2018
light red - had a system but wasn't liked
dark red - system but no map
gray - has neither a map or a system.

btw i did make the ungava election map, and even a wikibox.
the map: 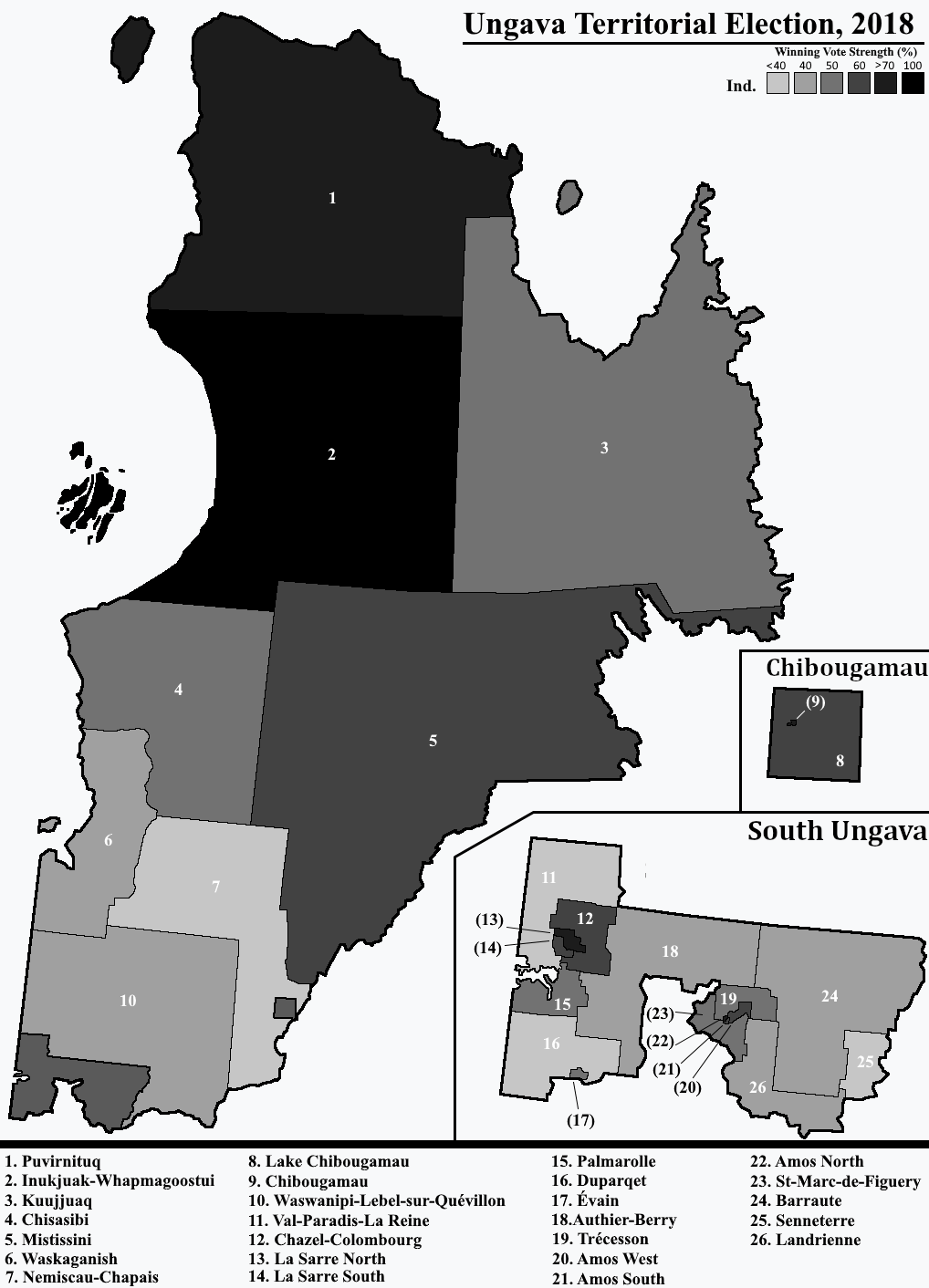 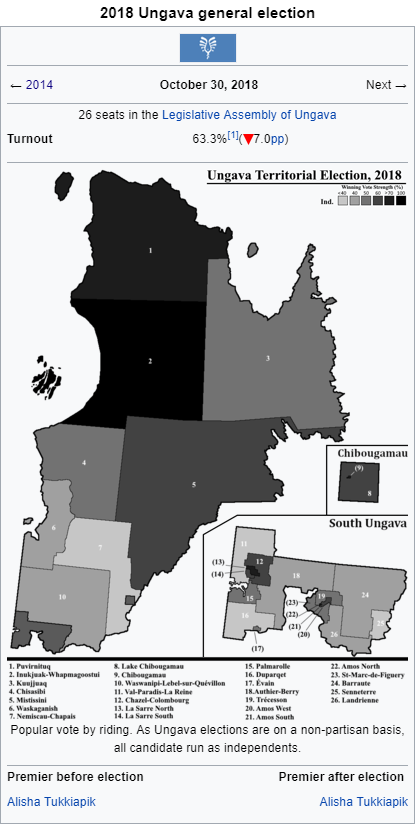 what i wanna do is to have the far northern territories mapped first since those are the easiest to do. if anybody can map them out i would be happy to do the system since it's literally all gray.
also here's the link to the political parties spreadsheet: https://docs.google.com/spreadsheets/d/1FA4PoL8ryx-TiBTTRZj5-LLAa3tS-F2CrAzx6bV0ZdY/edit#gid=1150321020

EDIT: st john's does have a system.
Last edited: Wednesday at 3:16 PM

I can do a system and possibly a map for New Jersey, but I would need to figure out how many seats are in its provincial legislature.
Threadmarks
You must log in or register to reply here.
Top
Top