The Unification of the Byzantine and Carolingian Empires

Note: This is one's first time posting here, so forgive me for any mistakes done regarding the scenario.

The Franks and Byzantines were one of the most influential people in history, the former laying the groundwork for the rebirth of Europe, from a land with disunited peoples being ruled over by barbarians to a continent in which scholarship and the principles of chivalry were instilled. The latter became the bulwark of Eastern Orthodoxy, influencing lands almost unheard-of, from Russia to Ethiopia.

So, what if these two great bastions of civilisation unified?

In the year of 802, the Byzantine court was abuzz with gossip, for the news spread that the King of the Franks (the Byzantines, or Romans, as they called themselves, refused to call him "Emperor of the Romans") had sent a proposition of marriage to the Byzantine "Emperor", Irene of Athens (technically she was emperor as this was the only way to legitimately claim the throne). Rumours of the "barbaric Franks" seizing power in Byzantium quickly spread. One of Irene's favourites reportedly frustrated (or "stopped") the plan, leaving the two states as seperate entities. If there was any possibility of the Franks and Byzantines uniting, it would be under this course of action. I'm not going to say the specifics of how this is going to work, the only thing that matters is that Charlemagne and Irene get married, uniting the two empires. Now, let's move on to the effects of such an occurence on the world (but mostly Europe). 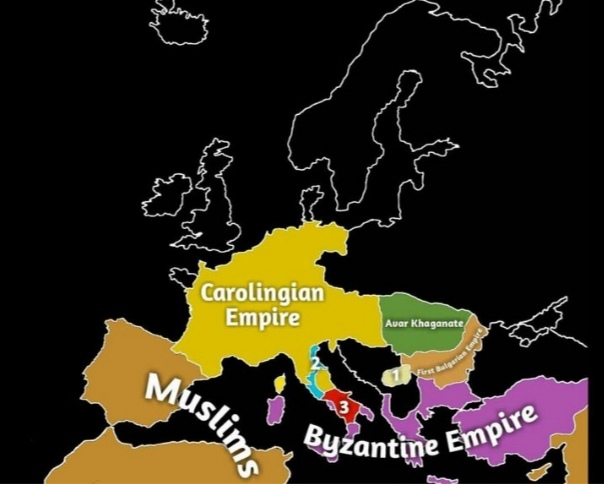 A map of the states neighbouring the Byzantine and Carolingian Empires.
Note that the "Muslims" part of the map is not a single entity. Also, the "numbered" states are named as follows: 1 - Serbia, 2 - the Papal States, and 3 - the Lombard Duchy of Benevento.
[One apologises for the low resolution of the map, which I created a year ago on my old phone that broke - the only way I could recover this was to screen-shot a post I made featuring above map and cropping it, so... yeah.]

By the 800's, the Byzantine Empire was in steady decline, it was being threatened by the Islamic forces to the east, and the Bulgarians along with the other Slavic peoples to the west. It was also during this time that the Franks were at the height of their power, with Charlemagne being crowned emperor by the pope and the Lombards and Saxons thoroughly defeated. Even with his empire at it's height, Charlemagne still had his fair share of problems - a lot of people still doubted the legitimacy of his title of emperor, especially in Byzantium where many Christians refused to accept the Bishop of Rome as the sole leader of the church. Many Byzantines also saw themselves as Romans (with good reason) and were insulted by a Frank being crowned "emperor of the Romans" when the Byzantine emperor was still in power. The Muslims, who share borders with the empire, were also a threat to Frankish power. With the unification of the two empires, most of these problems could be solved.

The marriage with the empress of the Byzantines - who werr seen as Romans by many Europeans - would easily solve the problem of Charlemagne's legitimacy as emperor of the Romans. The empire would also be seen as a sort of neo-Roman Empire, and an invasion of some of the former Roman territories is possible.

For the sake of the scenario, let's say that the empire does retake its former dominions. The first target would be the Duchy of Benevento, as getting back the Italian peninsula was the second step in being seen as truly Roman. Also, the Byzantines had a grudge with the Lombards (Benevento was a Lombard holding) as they repeatedly invaded their possesions in Italy. The Franks also conquered the Kingdom of Lombardy, so the inhabitants of Benevento had good reason to fight against the newly-proclaimed Romans. So, after a lot of deliberation, the Romans declare war against the Duchy. With Byzantine and Frankish arms, Benevento is quickly taken.

In our timeline, Charlemagne eventually invaded the Avars, although he made them a sphere of influence and didn't completely conquer their lands. In this timeline, with the help of the Byzantines, the invasion of the Avar Khaganate would be much more complete. I predict that all of their lands would possibly be taken by the Romans. 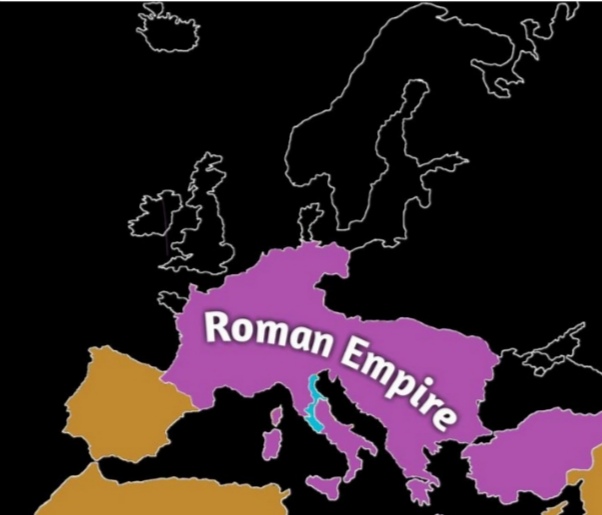 With the unification of the Carolingian and Byzantine Empires, the schism happening in the church slowly fades away. I predict that through a series of religious councils being formed, the Bishop of Constantinople and that of Rome would eventually come to a compromise, giving power to a council composed of the bishops of the major cities in Christendom, with the Bishops of Rome and of Constantinople being the head of aforementioned council, thus making them both "popes". Without the struggle of power in the church, I predict that Christianity would not be split between Catholicism and Eastern Orthodoxy, although there would be differences in practice in the East and the West.

With Christianity being more unified, the Russians would probably be more open to Western civilisation, as Russian society was heavily influenced by Eastern Orthodoxy and by Byzantine culture. In fact, one of the reasons why many Russian boyars or nobles refused to go to the West was because "they were heretics". Now, I can't say if serfdom would be abolished earlier or if the czars would fall earlier, as these events are too far into the future to accurately predict.

The newly-formed empire wouldn't last long. There were just too many cultural differences between the two empires, and the fact that the Byzantines saw the Franks as filthy barbarians who stole the title "Roman" also doesn't help. The empire would probably be split into two, with the eastern half being Byzantine and vice versa. I can't say who would rule the two dominions exactly as one cannot predict whether the Byzantines would still overthrow Irene or if the Franks would still split in three. What I can say, though, is that with the Byzantine Empire having more territory (after the split of the young Roman Empire), they would have more resources, more men, just more everything. This means that they could probably fend off the Ottomans longer that they did in our timeline. Who knows, maybe we could see a Byzantine colonial empire of some sort, rivalling that of Britain's? We may never know for sure, as those events are too far away from this timeline.

And so that wraps up this (admittedly over-simplified) scenario. Danke-schön for reading.
Top