@Thanksforallthefish as an Argentinian, this makes me extremely happy. Just a minor thing, I'm pretty sure most of the Misiones Orientales (today part of Rio Grande do Sul) were controlled by Portugal since 1801 (de jure they were part of Spain as of the San Ildefonso Treaty after the Seven Years War). Other than that, excellent maps!

Thanks to @James the AH Fan for his map of Deseret for giving me the eastern border of Utah Territory, but have a relatively unneccessary patch:

James the AH Fan said:
They ain't even claim the western territory the Qing lost in 1864?
Click to expand...

I took the places from wikipedia, which doesn't really show the locations, maybe it did, but i missed it.

I say we change sudan to it's RCS counterpart (albeit a bit lighter) because the current one is really boring in my opinion.

I've been wondering why there isn't any map on the Spanish Civil Was (1936) so I did one myself: 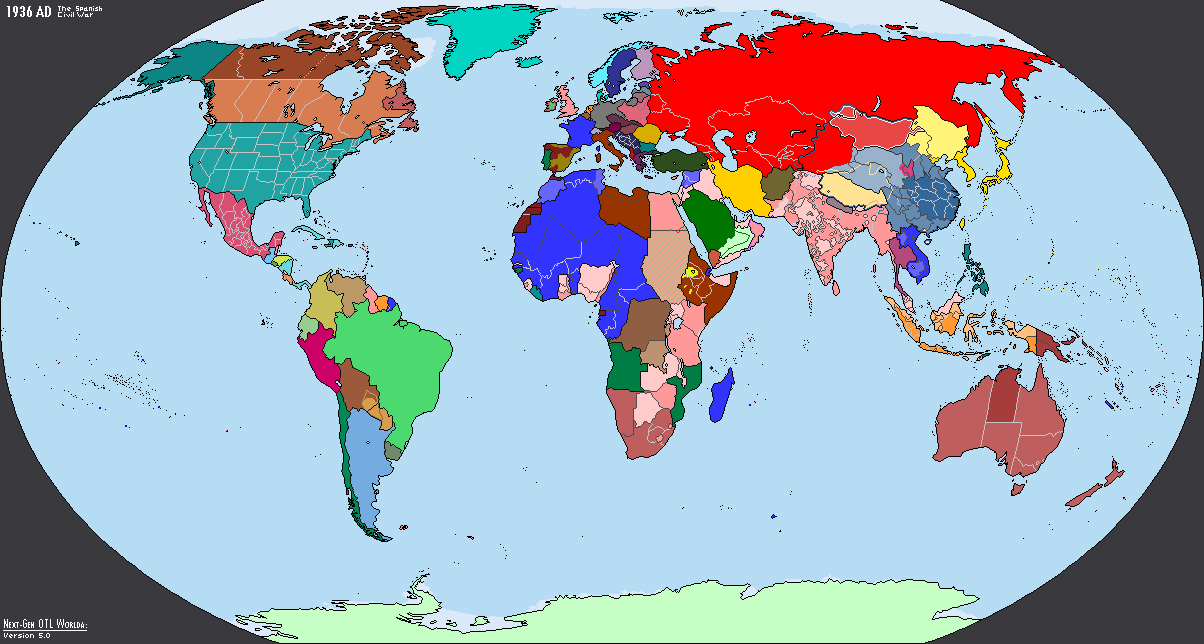 It represents the first days of August, 1936

It also shows ethiopian resistance in Italian East Africa, the real and claimed borders of Saudi Arabia (based on Omniatlas's middle east maps).
In South America, the peru-ecuadorian provisional border was agreed on july 36, thus I corrected it, and so with the Chaco War.

China's borders are as accurate as I could, with East Hebei marked as occupied not as a puppet because it was essentially an ocupation zone.
Last edited: Jul 25, 2020

Does anyone have a worldA with present day borders, but just that (e.g. no subdivisions, no different shades of color, no country claims, etc.)? Thanks in advance!

Guys, what font do you use for the year on the top called?

Aurantiacis said:
Does anyone have a worldA with present day borders, but just that (e.g. no subdivisions, no different shades of color, no country claims, etc.)? Thanks in advance!
Click to expand... 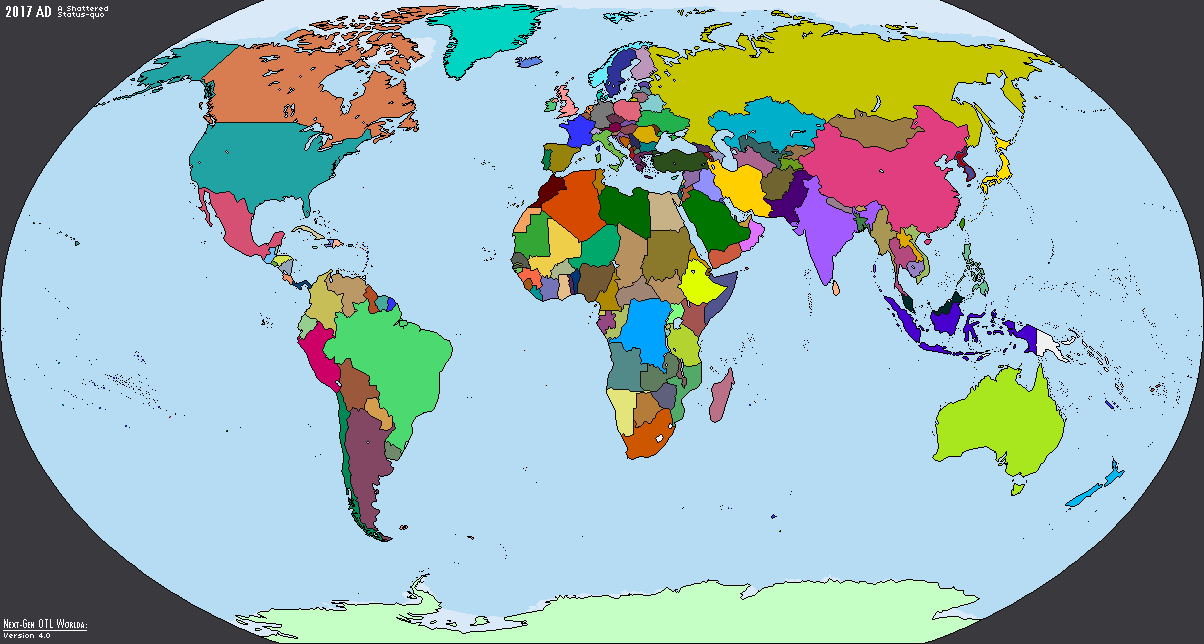 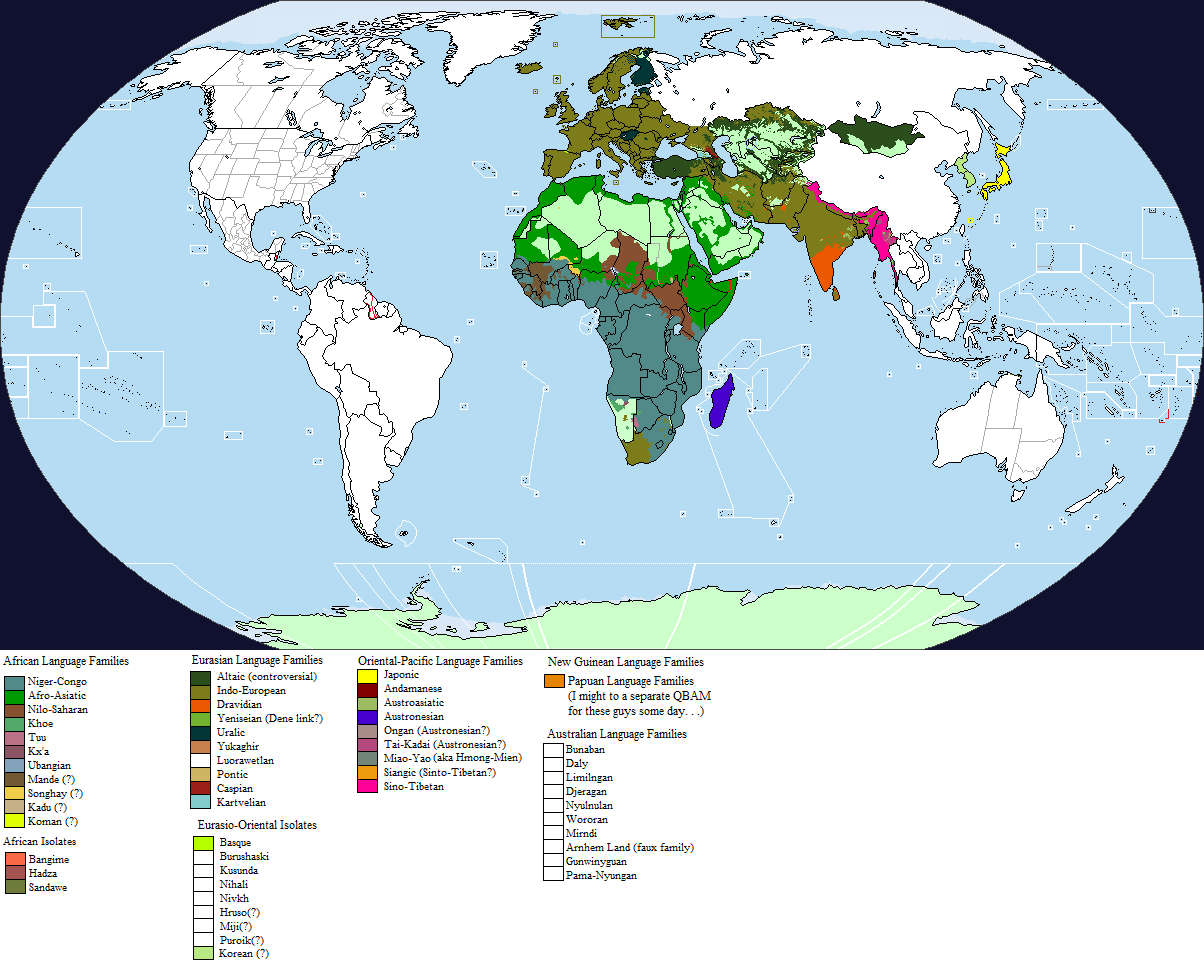 Found this in one of Beedok's old threads. Would be useful if this project wasn't dead.

Does anyone have a Map with outlines in the ocean?

Unkown00 said:
Does anyone have a Map with outlines in the ocean?
Click to expand... 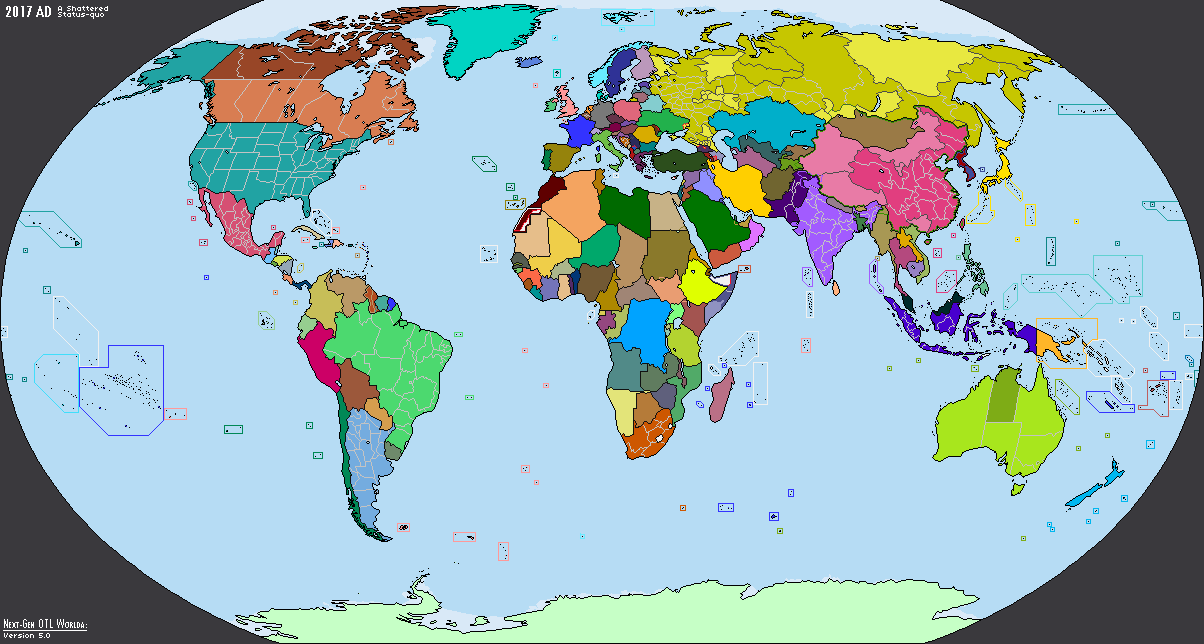 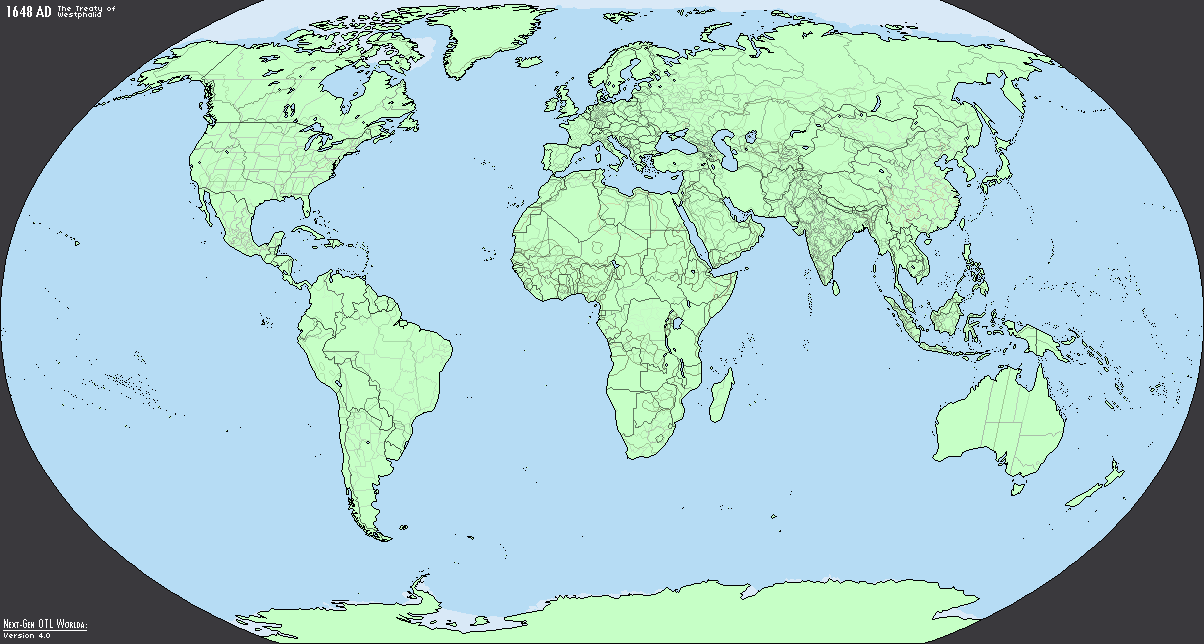 Thought this might be useful.
A composite of every worlda after (and including) 1648 and 1444.
Hope this is useful!

tungsterismapping said:
A composite of every worlda after (and including) 1648 and 1444.
Click to expand...

The Continental Divide needs to be reworked. British Colombia's border is directly on the Divide, instead of using two different lines for what is IRL the same thing.

That one has Mayotte as part of Comoros.

Keeping adding my Argentina patches and doing some minor changes to the maps! 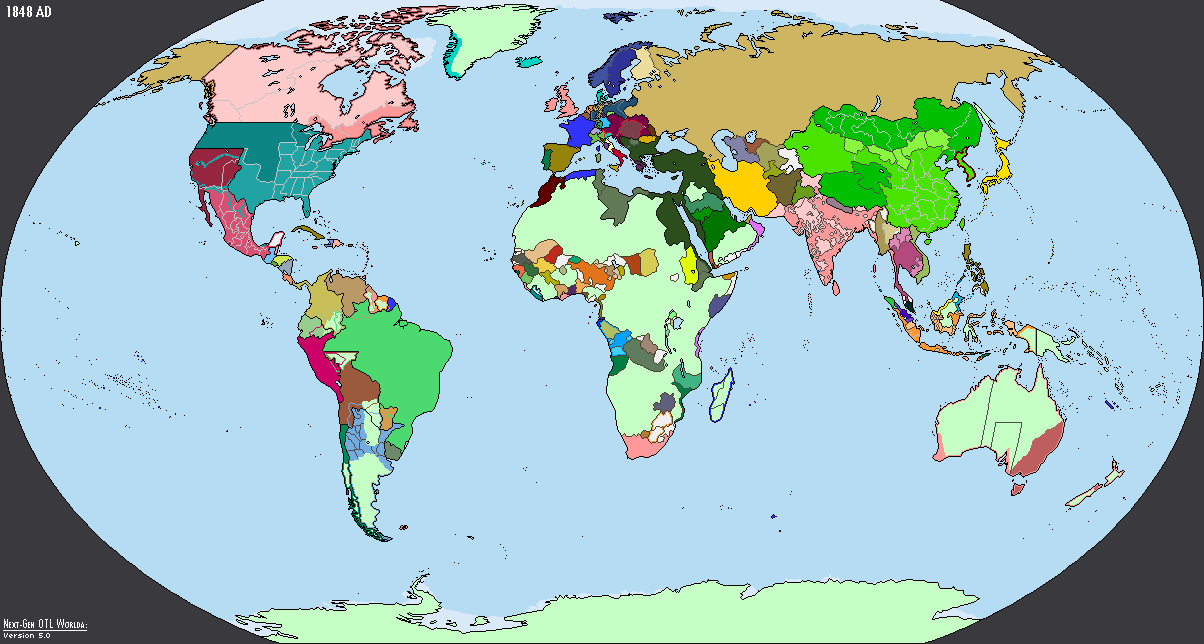 Not many changes here, besides Argentina (with "confederal" borders"), a better Mexican-American war, and I tried my best to show the rebellions ocurring in Italy at the time. I also show Nepal as independent; while it was heavily British influenced to my knowledge it never became part of the British Raj. 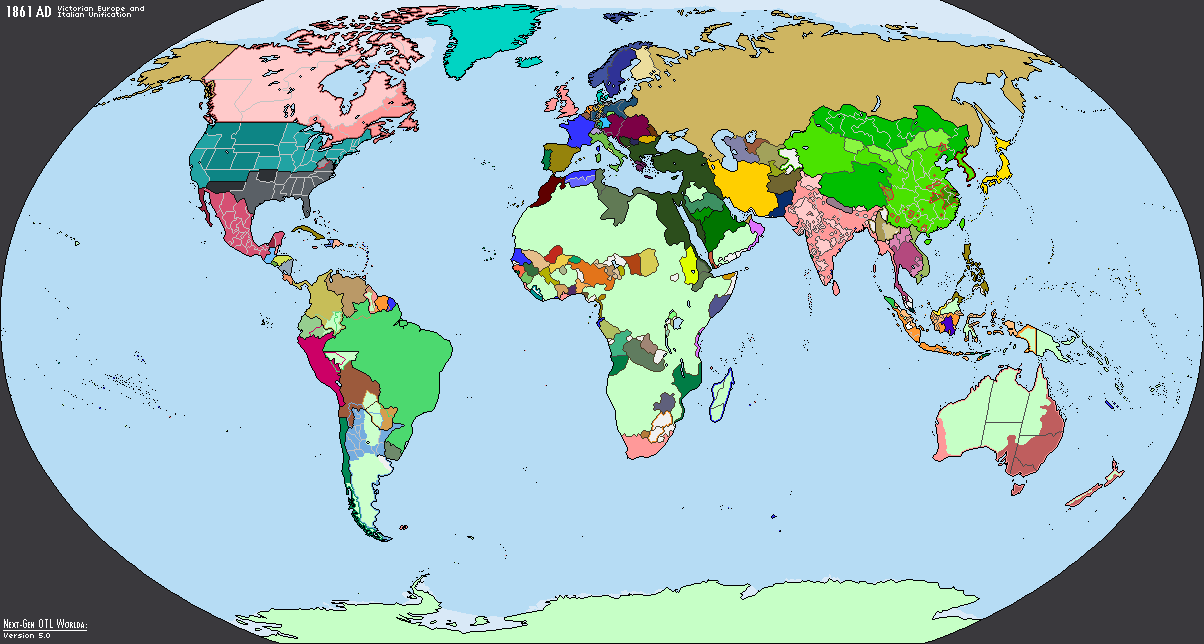 Again. not many changes. Based on the state of the CSA shown in the map, Buenos Aires was still a semi-independent state by the time, though that would end in September 17 with the Battle of Pavón and the reunification of Argentina (under Buenos Aires' terms). Besides that, I changed virtually nothing. 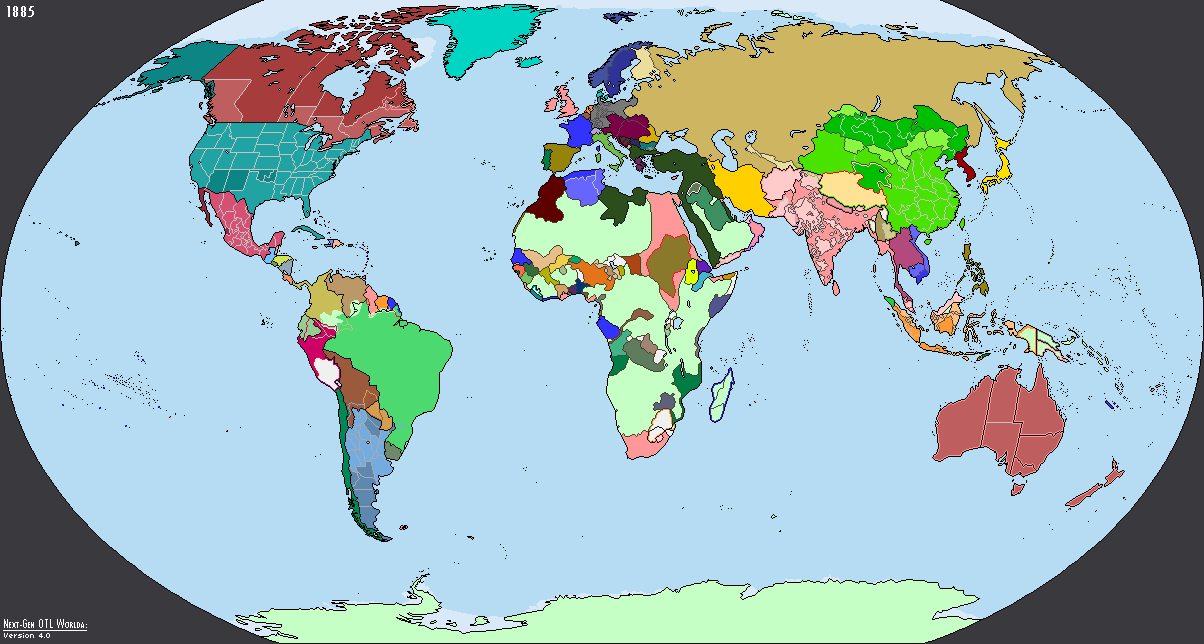 This is based on @James the AH Fan excellent 1885 map. I've only added my Argentina patch to it and changed a few things in Chile (by 1885 the War of the Pacific was over and Chile took over Bolivian and Peruvian territories). Not sure if the Peruvian civil war should be shown like that, but I didn't change it because it was in the original map.

Now I've excedeed the image limit, but tomorrow I'll post an updated 1836 with lots of fixes, and a Federal Brazil patch. And then we'll get into the newer maps, hopefully all the way to 2020.

Weird thing, local history for me.

Very small. It would only comprise of half a pixel.

Kinda weird question, but are there any good fonts and font sizes of those to use while making a worlda alternate history map?
Threadmarks
Reader mode
You must log in or register to reply here.
Top
Share:
Share
Top