France seems to have shot themselves in both feet then procced to comically hop around the room much to the amusement of everyone else.
Ireland: 1983 election 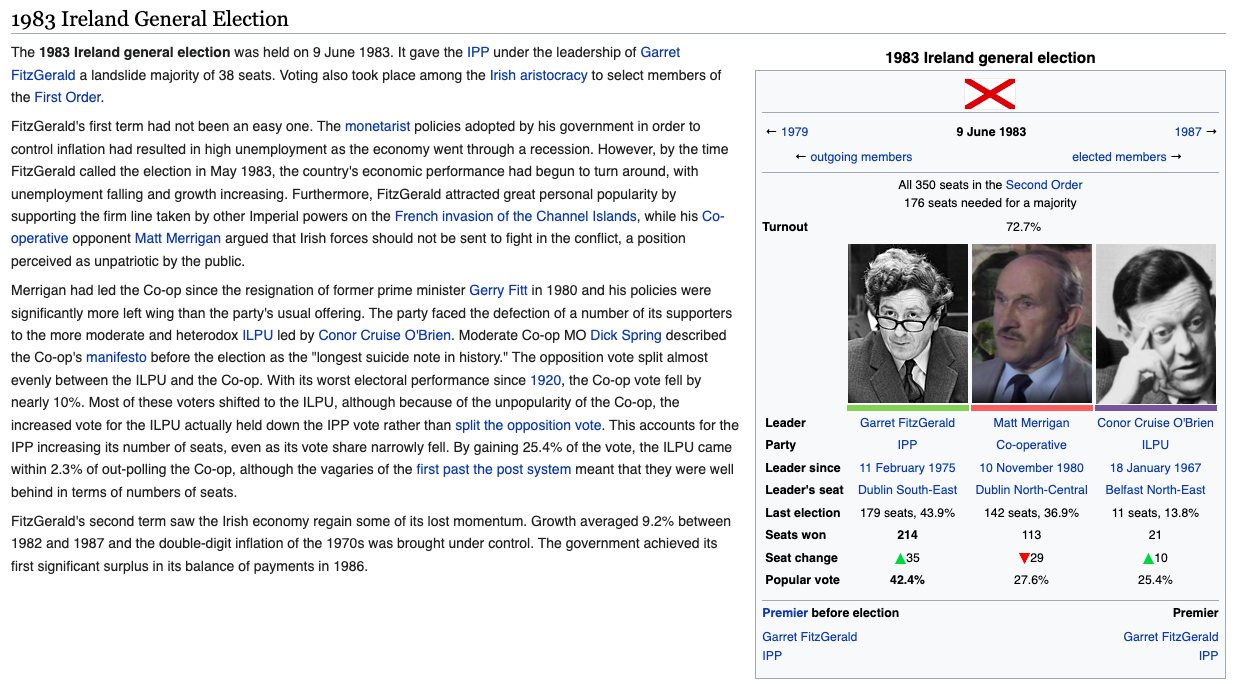 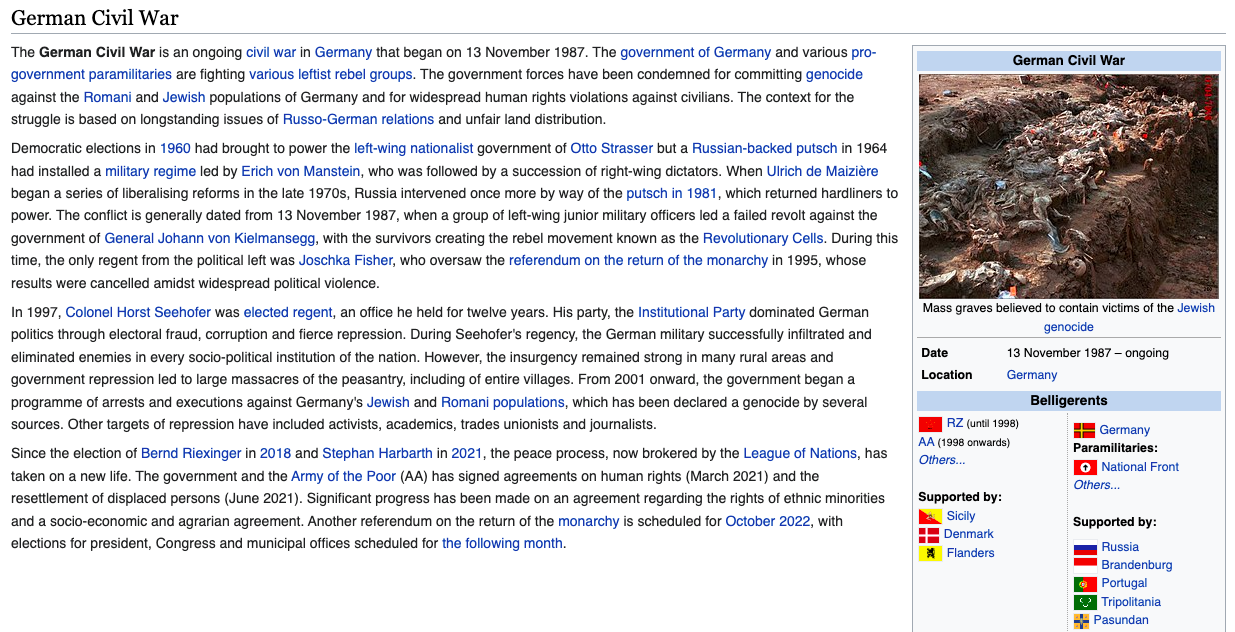 How did Stoltenberg become a prominent politician in TTL's Germany as he's Norwegian?

So, the Holocaust ITTL is an ONGOING EVENT? Well, it is a very... interesting world to live in)

Pasundan gets involved in the German civil war!?!

Whiteshore said:
How did Stoltenberg become a prominent politician in TTL's Germany as he's Norwegian?
Click to expand...

That’s meant to be Gerhard Stoltenberg, not Jens. I’ll correct that when I get the chance.

Wendell said:
Pasundan gets involved in the German civil war!?!
Click to expand...

I might have missed this, but when was Flanders recreated?

During the Nine Years War France annexed the French speaking regions of Belgium and the rest became independent as the Flemish Republic.

Considering the Bolsheviks were crushed in TTL's July Days, what became of the Romanovs after the monarchy was abolished, especially as Tukhachevsky was not a person who would tolerate potential threats to his regime.

Whiteshore said:
Considering the Bolsheviks were crushed in TTL's July Days, what became of the Romanovs after the monarchy was abolished, especially as Tukhachevsky was not a person who would tolerate potential threats to his regime.
Click to expand...

So the main family (Nicholas and his wife and children) were held under a reasonably comfortable house arrest in Petrograd by the provisional government, until they were expelled from the country in 1924, when they fled to Finland and, under pressure from the Germans who wanted to use them as leverage against the Russians, the Finnish government granted them the monies and use of the Romanov estates in Finland (which, in turn, gave them a right to sit in the Finnish House of Peers but Nicholas, in an outbreak of unusual common sense, never really took up that offer except for ceremonial events). Grand Duke Michael becomes the informal head of Russian monarchism but, although he does make a few visits to Russia and some of the warlords of the period do give notional doffs of the hat to the Romanovs, the movement is really dead by the time Tukhachevsky unites the country in the 1920s. Michael is very briefly made the Supreme Ruler of the German puppet Russian government during the Nine Years War, an act which effectively buries the monarchist movement amongst the Russian people and gets the Romanovs expelled from Finland when the government in Helsinki senses which way the wind is blowing and switches sides. Thereafter, the remaining emigrees, by this time a pretty strange bunch as Tukhachevsky was fine with traditional noble families and suchlike as long as they remember where their loyalties need to lie, mostly flee to Britain or the United States. The Romanov family itself remained banned from Russian soil until they were re-admitted by Nikolai Tolstoy in 1981, on the condition that they sign a formal declaration renouncing their claim to the throne. They were, however, allowed to call themselves the Grand Duke of Moscow. Since then, the members of the family have been involved in running legal battles over what became of their estates and some have gone on to become reasonably prominent members of Russian society. Grand Duke George (this guy) is currently an up-and-coming member of the National Party.

The major Romanovs with different lifespans are as follows:

This is a very novel, and quite different timeline, being told through politics and flashpoints.

When this timeline's wiki entries reach the modern day, before you move to the new timeline, would it be possible for some maps of the world as it evolves in timeline.

Did they marry anyone prominent ITTL and what happened to Tatiana for her to die in 1926 while her sisters lived quite long (with Anastasia living until 1984)?

Whiteshore said:
Did they marry anyone prominent ITTL and what happened to Tatiana for her to die in 1926 while her sisters lived quite long (with Anastasia living until 1984)?
Click to expand...

Nobody particularly relevant for this TL. I imagine they would've been set up with other emigree Russians or local German/Finnish aristocrats. As for their ages, I used the death dates for some of the more prominent imposters out there (Marga Boodts, Larissa Tudor, Granny Alina and Anna Anderson) for the girls and a guess for the lifespan of a haemophiliac for Alexei.
Canada: 1985 election

@Rattigan, I'm not sure if this has been asked but what exactly caused the cold war between the British and the Chinese to break out? Also what's the state of climate change in TTL?
Threadmarks
Reader mode
You must log in or register to reply here.
Top
Share:
Share
Top