the Eagle and the Crescent: A Different Collapse of Rome

I've been working on a map series for the last month or so. I was very inspired by @KillEmAll1989 's excellent Gothic Empire timeline, which I personally think is the best timeline ive read in a bit. Overall the main POD was originally a semi-surviving Carthaginian Empire, but I realized a better timeline could be made with less butterflies dying. The new POD is that in 235 during the Year of the 6 Empires the empire is partially split between a Northern Roman Empire, formed by Maximus Thrax with Rome as its capital, and a Southern Roman Empire formed by Gordian with Carthage as its capital. 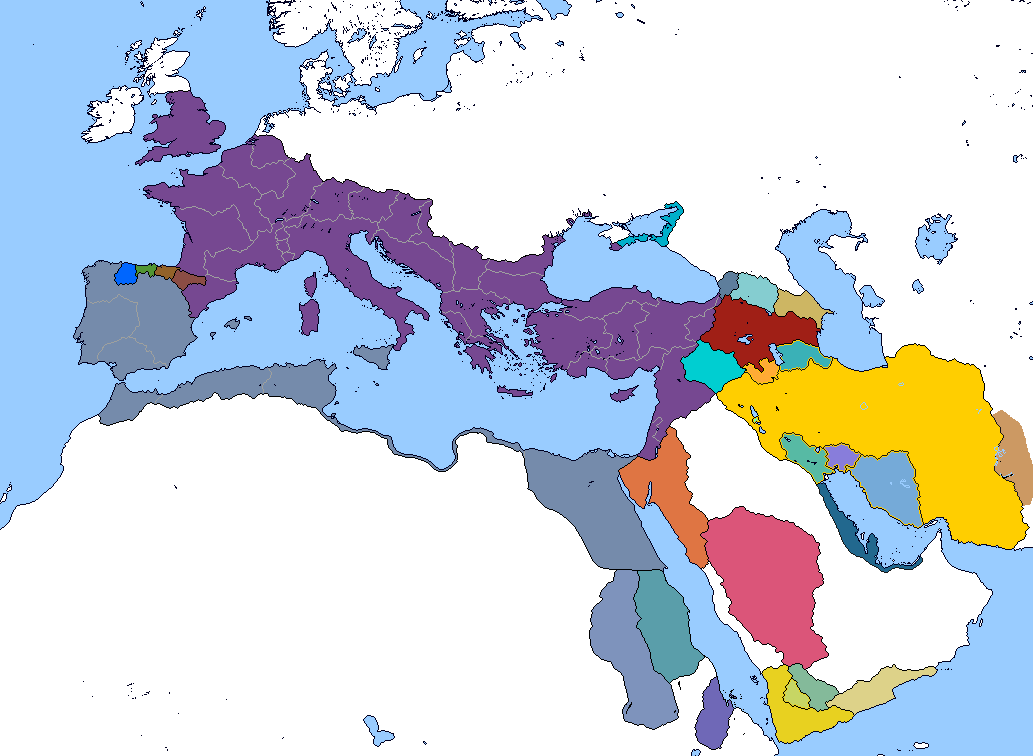 The Next 100 years would be that of massive social and cultural change. The weakening of the Empire at the hands of barbarian incursions lead to military defeat. Mystery cults and new religions that did not acknowledge the emperors authority arose in popularity. Christianity, originally viewed with intense suspicion by the Roman populace grew rapidly in popularity particularly among the urban poor and urban wealthy. The main centers of Christianity formed a new hierarchy, Jerusalem, Alexandria, Antioch, Ephesus, Rome, and Carthage would form the Hexarchy of Christianity. Armenia, Georgia, Ethiopia and Osrhoene all adopted the faith. In 285 Northern Emperor Diocles decided to split his Empire into 3 portions, Oriens, Illyrium, and the Occidens, forming the Triarchy of the Northern Roman Empire. This reform proved to be no better than the system in place. Diocles survived his reign, but his successors failed to keep the fragile system of power in check. The conflict came at ahead when Licinius, Emperor of Illyrium gathered the legions on the Danube to press his claim on the Occidens. Licinius defeated Maxentius in the Occidens and married Galerius's daughter Valeria. Licinius created his victories to the Christian God and delivered the Edict of Vienne, granting freedom of Religion in the Empire in 313. Licinius would later formalize Christian doctrine in the Council of Gangra. This council would affirm Christian belief in the Gangrene Creed, expelling Arian elements from the Orthodox churches. Licinius built his great capital to celebrate the triumph of his faith and his empire in Syrmium, renamed Nova Roma. This city would be the site of the Empire's ultimate embarrassment. 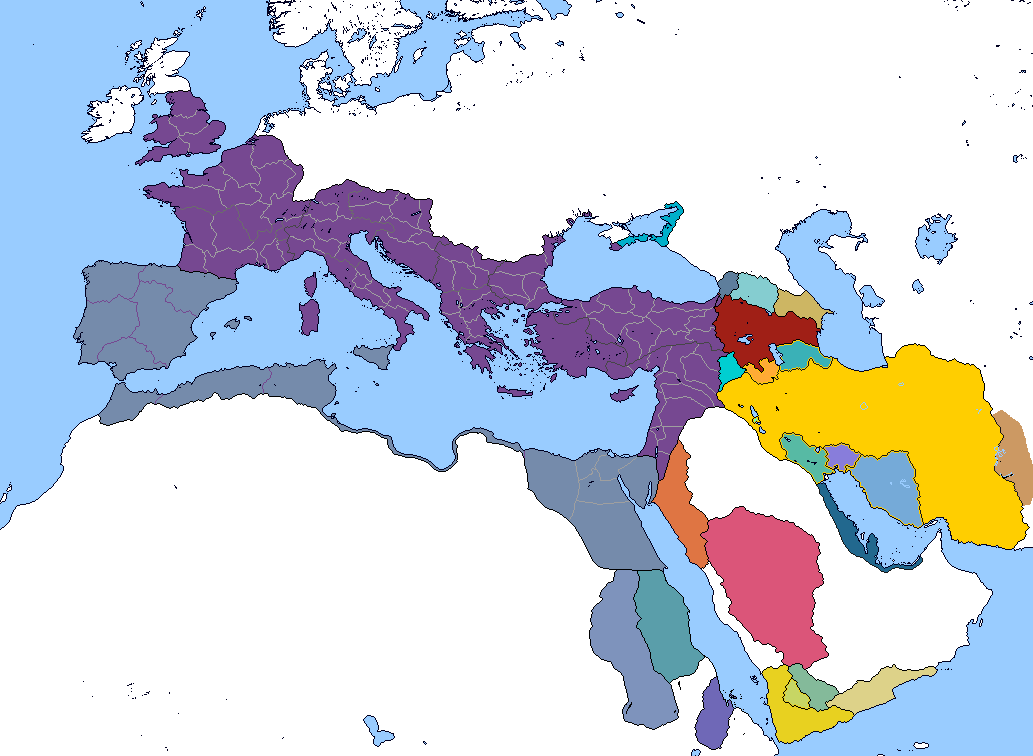 The political situation in the Empire slowly returned to its dire situation. Licinius the Great died in 340 AD of old age, and his son Licinius II took over the empire. Licinius reestablished authority over the South at extreme cost, his political capital spent fighting a costly war. The rise of the Neo-Persian Sassanid Dynasty in the east threatened the borders and barbarian incursions increased. His death in a "accident" lead to the empire being split in four again. In 376, the Great Disaster began. Emperor of Oriens, Valens invited Gothic tribes to settle in exchange for helping press his claim on the empire. This decision completely backfired. The Arian Goths invaded, sacking Nova Roma and calling the Council of Syrmium. In the Council of Syrmium, the Arians created their creed, forming the Homoean Church, more colloquially called the Gothic Church. After conquering the Division of Illyrium, they then moved to conquer Thrace and Asia. In Ephesus, Airmanareiks was crowned "reikreikē" King of Kings in 384. This disasterous defeat opened the floodgates for migrating peoples escaping the Hunnic onslaught. Foederati status was granted to the Franks, Saxons, and Suevis. The Saxons spreaded from their lands along the Saxon Shore and formed the Kingdom of Saxony. the Suevi spread to rule the lands we call "Burgundy". in 410, the Alans sacked Rome and conquered the Province of Aquitaine. The Southern Roman Empire did not fare any better. the Berber peoples underwent their first "rising", disregarding their emperor's authority, creating the Romano-Moorish kingdoms. The Southern Empire did not escape the Germanic invasions either. the Vandals formed a territory in Spain, and the Sciri created a domain in Gallaecia.

This left "Rome" in 3 different parts. Rome of Italia, ruled by the true line of Emperors, drawing authority from the Church. The "Palmyrene Empire or the Udhainid Empire", an Arabo-Roman Empire ruled from Palymra. The Roman Empire would slowly bleed territory, especially during as a result of the Lombard and Haudobard Invasions in the 560s. The Palmyrene Empire proved to be extremely successful, leaving a lasting cultural legacy on the Arab people both sedentary and nomadic. It would remain strong and conquer Egypt until its collapse due to the rise of Iman in the mid 640s. The final place where Rome proved to stay strong was in Britain. While Rome abandoned Britain to its own vices in 405 AD, the legions remained. While mostly unattested, these legions formed a warlord period lowkey in the historical record, with them completely successfully repelling an invasion from both the organized Saxons of Gaul and the Angles on multiple occasions, but not enough for many Brythonic peoples to escape to Brittany and Britonia in Spain. 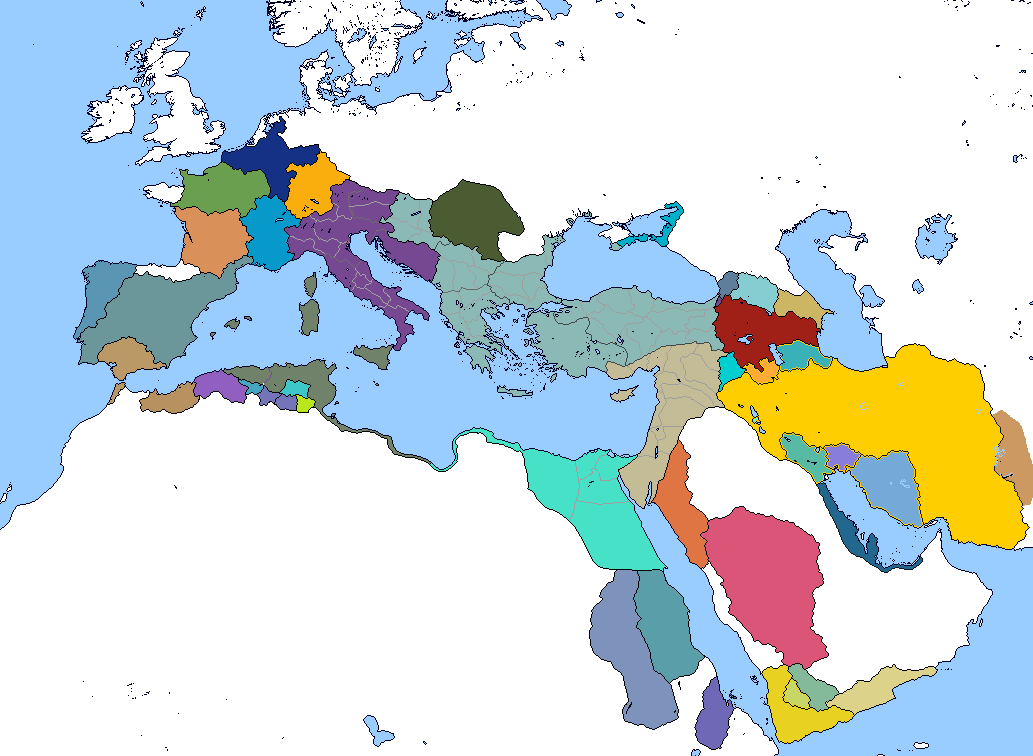 Lothal said:
Carthage as its capital.
Click to expand...

I have doubts - the fact is that during this period the Italian economy was dependent on Carthage.

WotanArgead said:
I have doubts - the fact is that during this period the Italian economy was dependent on Carthage.
Click to expand...

Besides Carthage I was considering Tarraco or Caesarea, but during this time the two empires wouldve been codependent and in a somewhat symbiotic state like our OTL East West Spilt.

Of course this timeline has its own version of Islam, but here there are some extremely major differences. ITL it is called Iman. Followers are called Mu'min. The religion began in 610 when Mustafa began receiving revelations in the city of Becca (Petra). He began preaching in public and gradually grew a following, preaching monotheism and opposing idolatry. The Mu'min were expelled from Becca, taking refuge in Medina in the Hegira. Mustafa's following grew among the Arabs. Mustafa became a political and religious leader in Medina, leading to new revelations. Becca sent a military expedition to crush the Mu'min, and the citizens of Medina fought back. Mustafa sent expeditions to conquer, convert, and form alliances with other Arabs. In 630, Mustafa reconquered Becca. In 632, he closed his prophethood at Ad-Deir on his farewell pilgrimage, giving his adopted son Ali leadership of the Mu'min. Mustafa fell ill and died in 633 in Medina. Mustafa was faithfully devoted to his wife, but never sired any children. Before his prophethood he adopted Ali, the son of his cousin.

It is split into 4 major denominations:
the Sunni also known as the Imamiyya or the Traditionalists - The Sunni follow a lineage of primogeniture directly from 's adopted son, 'Ali, with descendants claiming the ttle of Caliph and Imam. The Sunni backed Hassan, Ali's biological son in the Fitna. Initially following a seniority succession style, after the Anarchy period rule became exclusive primogeniture. Sunni theology was codified in the 8th and 9th century by Persian scholars under tutelage of the Caliph-Imams. Sunnism is diverse in views and has gone through multiple different orthodoxies throughout history. Sunnism is the majority religion of Mu'min today. OTL comparison is a mix of Zaydism and Sunnism.

the Shurat - The Shurat were formed from opponents of both Hussan and Zayd, who supported the exclusive rights of the Shura to decide the leader of the Mu'min. During the Fitna, tribal leaders voted Ibn Zubayr as Caliph. Shurite forces were decisively defeated by Ali. The surviving Shurites escaped to the mountains of Oman, forming their own Imamate. Shuris believe rulers must be infallible, and if they fail to be infallible or be removed by force. Shuris also believe in equality under god, the requirement of women to Jihad the same as men, and the abolition of slavery. Shuris are mostly found in the region of Oman, East Africa, and Tripolitania. OTL comparison is Ibadism.

the Ikhwan - The Ikhwan was formed from the supporters of Zayd, Ali's adopted son. Ikhwanis believe that all Caliphs must be adopted. Ikhwanism is very theologically unorthodox to the other 3 major sects. Ikhwanis believe in reincarnation, universal and transcendental god, the ability to transmit knowledge between two persons without physical contact, the importance of the esoteric meaning of the Qur'an, strict adherence to the pillars, and that the Quran is the physical embodiement of Allah. the Ikhwan have a strong tradition of monasticism and asceticism. The Ikhwanis are mostly found in Yemen, Asir, Mount Lebanon, Jabal al-Ikhwan, the Zagros mountains, Makran, Al Bahrain, and other mountainous regions of the Armenian Plateau. The Ikhwan reached a peak of political power during the Zaydid Caliphate from 900-1200, when they were Custodians of the Holy Cities and was more powerful than the Imam-Caliphate. OTL comparison is the Druze, with an added spice of extreme Sufi beliefs.

the Shi'i -the Shi'i arose from the destruction of the seat of the Caliph-Imams Al-Mansuriyah by the Mongol hordes in 1256 and the succession dispute that followed upon the return of the missing successor Muhammad al Nafs al Zakiyya. al Nafs al Zakiyya called for an divinely righteous army to remove the invaders that had usurped the throne he desired. The army successfully expelled the Mongols from Egypt, al-Sham, the Mashriq, and Arabia and set up a seat of power in the new city of Mahdia (otl Salamiya). al-Nafs al-Zakiyya ruled a Imam-Caliph for 5 years. in 1281, he met a massive combined Sunni Perso-Arab-Majar-Mongol army in the fields of Al-Fu'ah. In the fields he would meet his end, a long with scores of soldiers on his side and on the others. With no heirs, his followers decided the seat of Caliph-Imam was from that point empty. Khalinis believe in a complicated eschatology based on the battle of Al-Fu'ah, with the Mehdi returning with martyrs of Fu'ah to defeat evil. Other important values are the importance of martyrdom, mourning, and justice. Shi'is are predominantly found in Al-Sham, Medina, Siqiliya, Iqritiya, and other Mu'min parts of Europe. OTL comparison is Twelver Shi'ism.

Other sects exist in Iman, usually called the Ghulat sects, but these 4 groups are the base groups that 99% of Mu'min fall into. 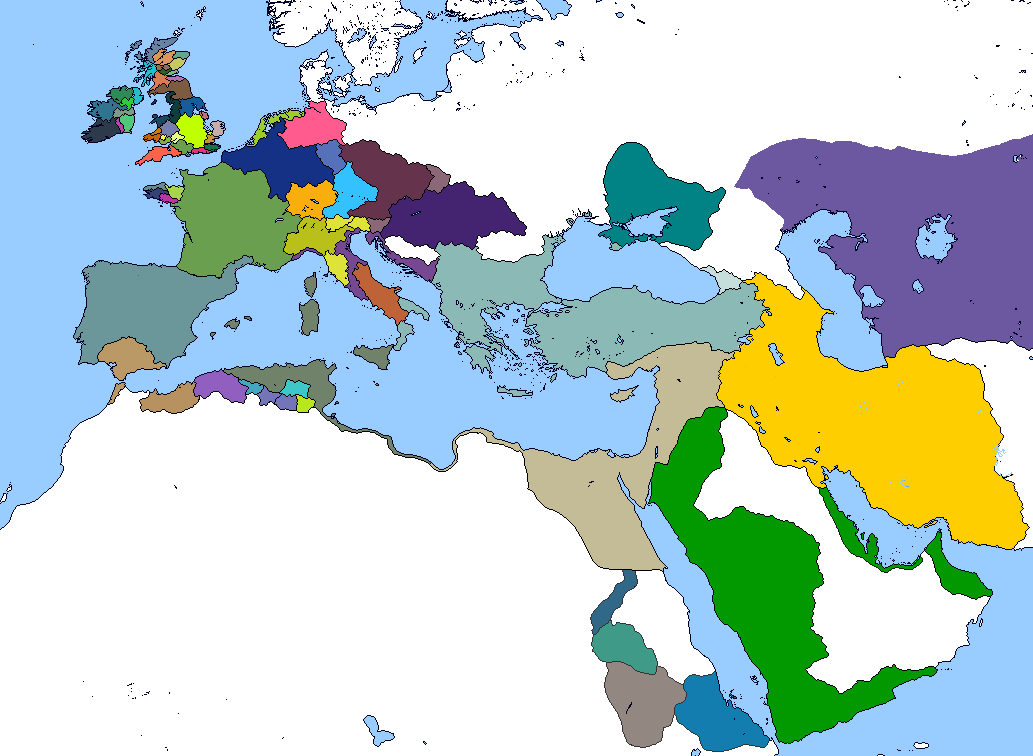