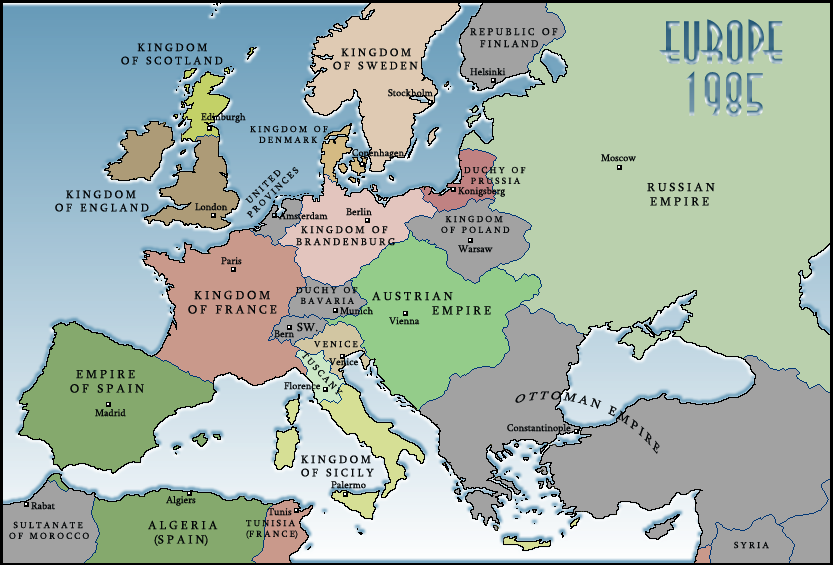 I like, but what is this timeline? Why ii it called Diamond?

Lottie said:
I like, but what is this timeline? Why ii it called Diamond?
Click to expand...

Diamond isn't a timeline, he was (and presumably still is) a person. Arguably the alternate history cartographer in the very early days of AH.com. Was banned years ago and a lot of his old maps were in danger of being lost due to being hosted either on now defunct sites or on very old versions of the board itself. 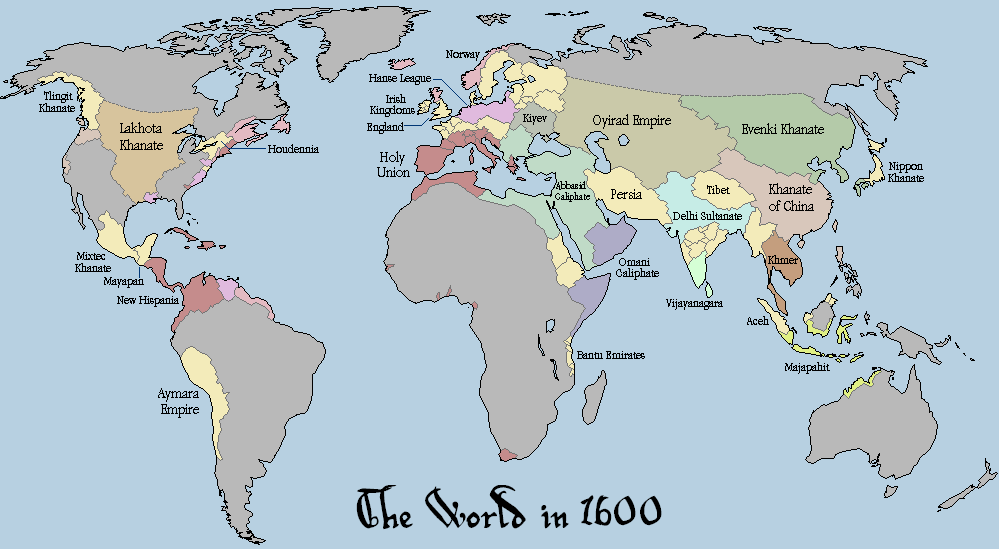 I'm not too sure of all the details just yet, but the main POD is the Arab victory over Byzantium in the 7th century. After that, the muslims turn their focus towards the east, however. By 1000, most of Asia is Islamic, and the religion has begun to make inroads into China. Islam acts as a unifier for the various Turkic and Mongol tribes, and they conquer China in the 12th century, before going on to smash Japan. My thinking is that they never turn towards Europe in this TL. Japanese, SE Asian refugees and the random Mongol expedition discover North America, and Old World diseases begin to spread among the native population along with Islam. By 1500, several khanates are formed, most notably that of the Lakhota, which benefits greatly from trade and advisors from the Chinese colony around Seattle.

Meanwhile, in Europe, the Visigoths in Spain experienced something of a revival starting in the 8th century - the Arabs never made it across all of North Africa, never mind into Europe, and Hispania begins to become the cultural and scientific powerhouse of Europe. The Pope flees to Toletum in 955 after an abortive invasion of Italy by the Abbasid Caliphate, and the city has been the headquarters of the Church ever since.

Shut out of the east, Christianity has spread instead into central and northern Europe (the Norsemen were mostly converted by 1100), and deep into western and central Africa - fiercely Christian Berbers traverse the desert sands in this TL, and missionaries have spread the religion deep into the Kongo Basin and beyond.

A union of trading and mercantile cities in the Low Countries and Germany, the Hanse League (much akin to OTL) springs up in the 12th or 13th century, uniting the region and becoming wealthy by acting as a center of trade and learning. Some of the finest colleges in Europe are found in Hanse cities.

By 1500, Hispania's ruling Gothic family is inbred and mostly powerless; the Church has ruled in all but name for the last century. In 1520, they legitimize their power after the last king dies without an heir by declaring Hispania a Holy Realm. Over the next century other southern European states join, either through diplomacy or conquest, forming a powerful Holy Union.

The Americas are discovered (by Europeans) in 1560, and the Union, flush with its new power and missionary zeal, are quick to colonize Central America. The Hanse and Norse jump on the colonizing bandwagon and found colonies of their own in northeastern North America and along the northern coast of South America. Other, minor states, like England, Neustria, and Austrasia, have trading outposts sprinkled all over the globe.

Now, in 1600, the forces of the Holy Union are beginning to turn their attention back to the long-neglected Egypt, Middle East, and Balkans, where the Abbasids have held sway for centuries. The first blow in the this conflict has already been struck, in fact, with the successful Hispanian invasion of Greece in 1593...
Last edited: May 2, 2021 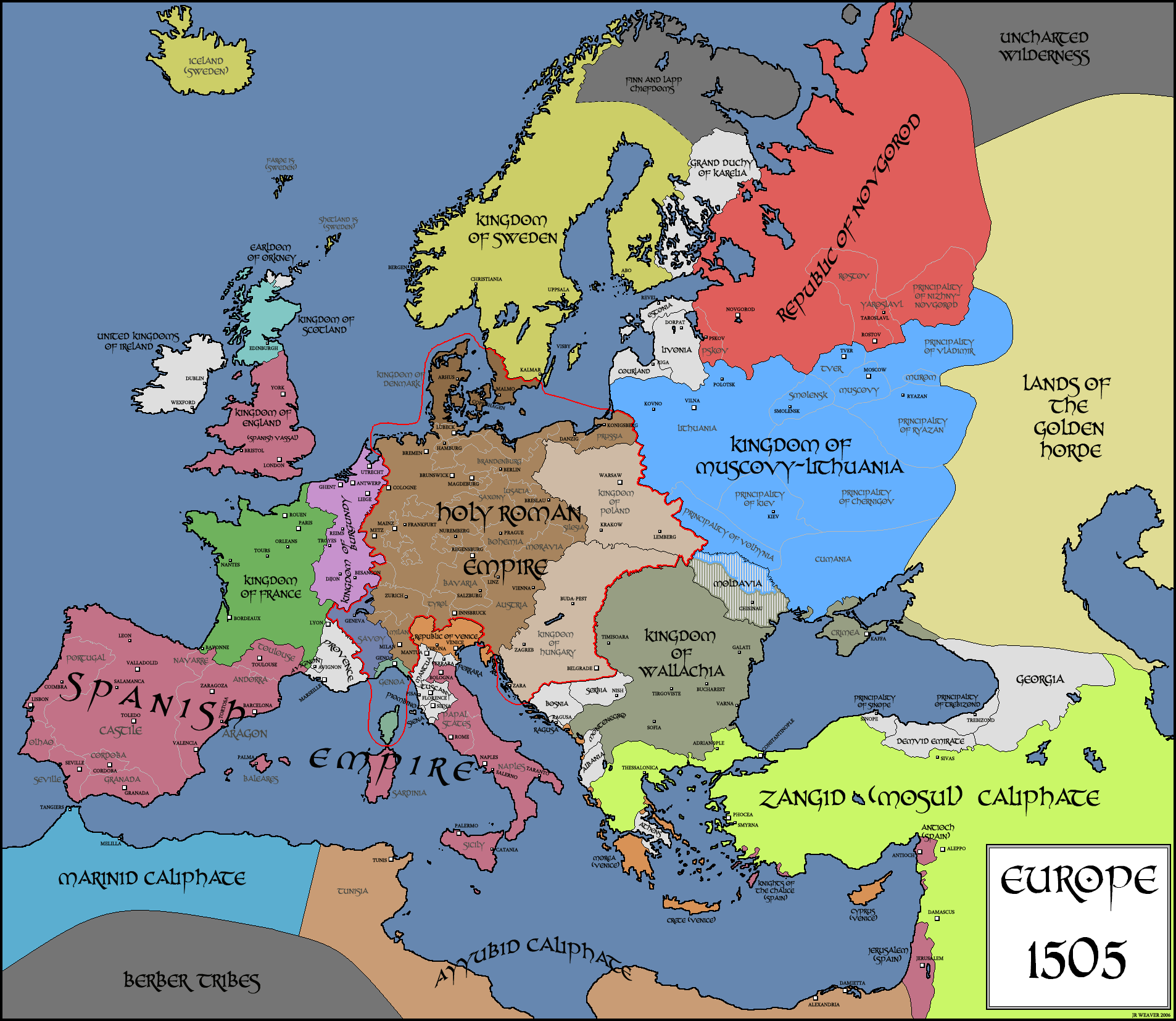 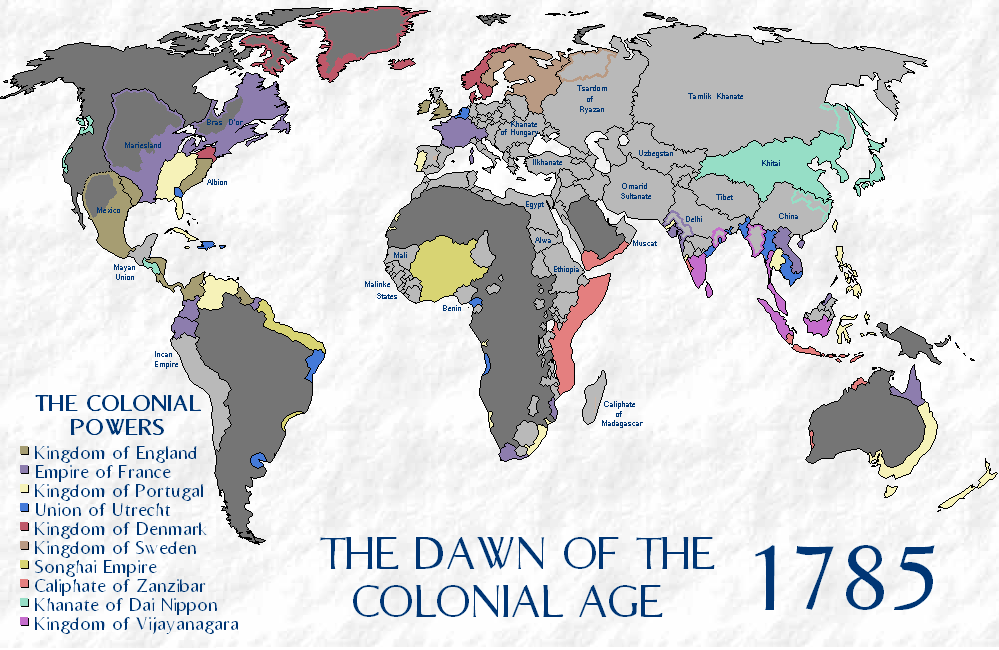 Diamond:
An attempt at this. This is a world resulting from a more successful Mongol conquest in Europe. Many Europeans flee to the Crusader States, giving them the boost they need to hold on and expand into Egypt. (Yes, I know I've used that trope before, but I like it. ) The Mongols do not convert en masse to Islam, instead adopting a patchwork of religions which in time grows into their own unique religion; Arab and other muslim nobles and their followers flee south to east Africa and Madagascar, where they set up rival caliphates. France eventually emerges as Europe's 'superpower', reuniting the shattered lands to drive out the Mongols in the 14th century.


. The Hungarian Khanate is Christian - a mutant offshoot of the Orthodox Church.

2. Egypt and the Levant, as well as several of the states bordering the Red Sea, are the descendents of Crusader kingdoms. They are fiercely Christian; Islam is now a religion of southeastern Africa, northern India, and the Arabian interior; there are also a few hold-out emirates in North Africa, but they are for the most part ineffectual vassals of France or Egypt.

3. Utrecht is allied with both Denmark and Sweden (even though both of those powers are at each other's throats now and again.)

4. Novgorod is part of Sweden; there is at the moment a three-way power struggle going on in northeastern Europe between Sweden, Ryazan, and Hungary, a struggle that Sweden currently has the upper hand in, but which is threatening to swing towards Ryazan, as both Sweden and Hungary are on the verge of war with their neighbors.
Last edited: May 2, 2021 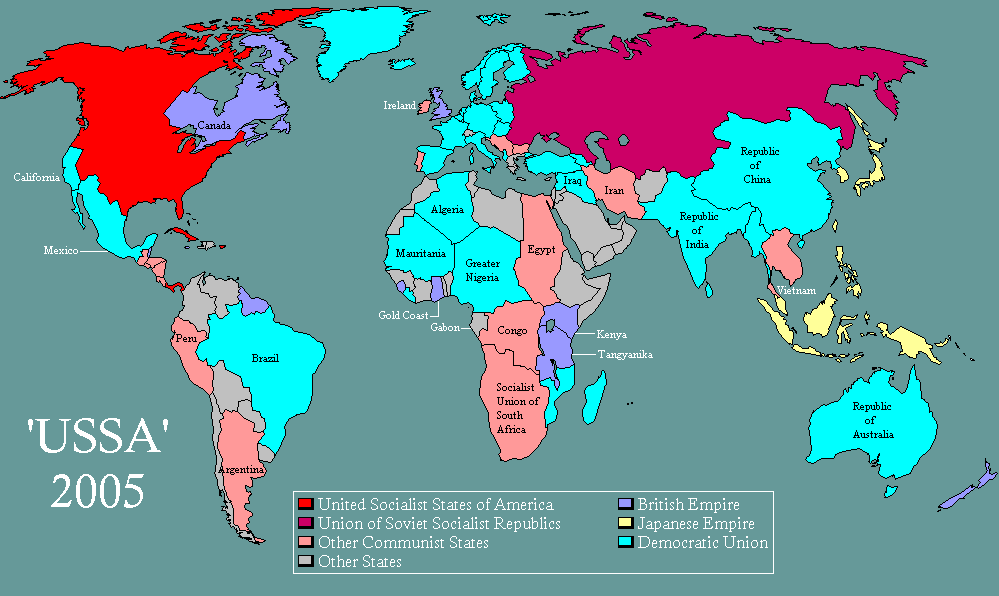 Diamond: I've been working over the last couple of days on a short story set in a world where communism is the dominant political creed. All I really have worked out for background so far is that Eugene Debs led a strong socialist movement before and during WWI (lifting a page from Newman & Byrne), Russia went red more or less on schedule, and WWII was fought between fascist (but not Nazi) Germany/France/Italy/Spain vs. an uneasy alliance of Britain and the two communist powers, USSA & USSR.

Does anybody have any ideas for a good POD and a subsequent chain of events that might lead to something like this? I'm not looking for you to write a TL for me, I just need some food for thought. Plus, I'm having trouble coming up with a plausible reason for Japan, a democratic China, and the USSR all existing somewhat peacefully side by side. (It's central to the story I'm writing.) 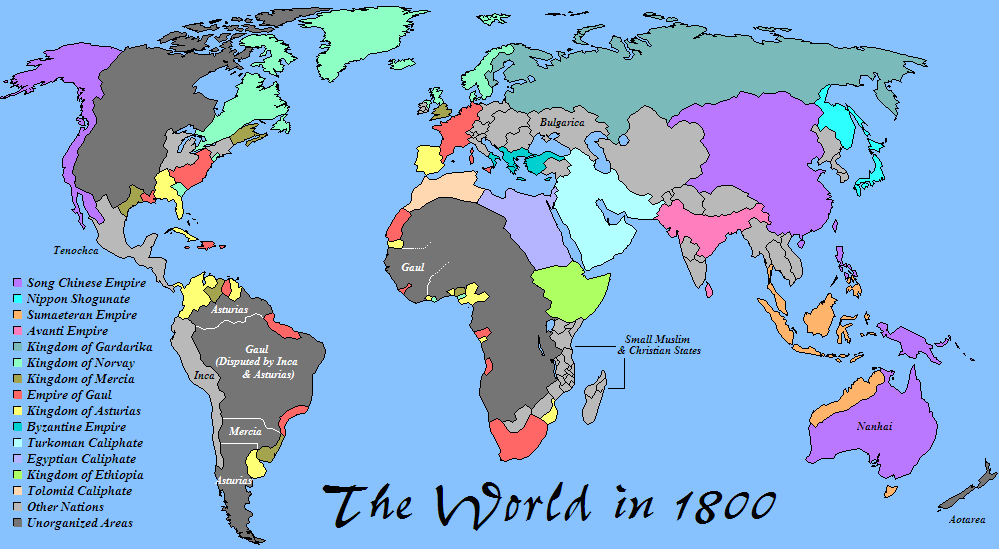 Originally Posted by Hermanubis
hey, is the Michigan/Wisconsin/Illinois/Ohio region unclaimed, or what?

No, it's an indigenous kingdom. In this TL, Chinese traders brought Eurasian plagues to the Americas in the 1300s, allowing the natives time to build up some resistance before colonization really got into full swing.

Thanks to the squabbling and wars and one-upsmanship between the colonial powers (China, Asturias, Gaul, Norvay, Mercia), there are quite a few fairly powerful native american states, who've benefited from Eurasian technology. The Plains Indians in this TL are heavily Buddhist-influenced and are starting to become sedentary rather than semi-nomadic; within two or three generations you'll start to see kingdoms forming on the Great Plains. In the south, the Tenochca and Inca are going through serious civil and religious crises, but if they can survive, they'll be all the stronger for it.
Last edited: May 2, 2021 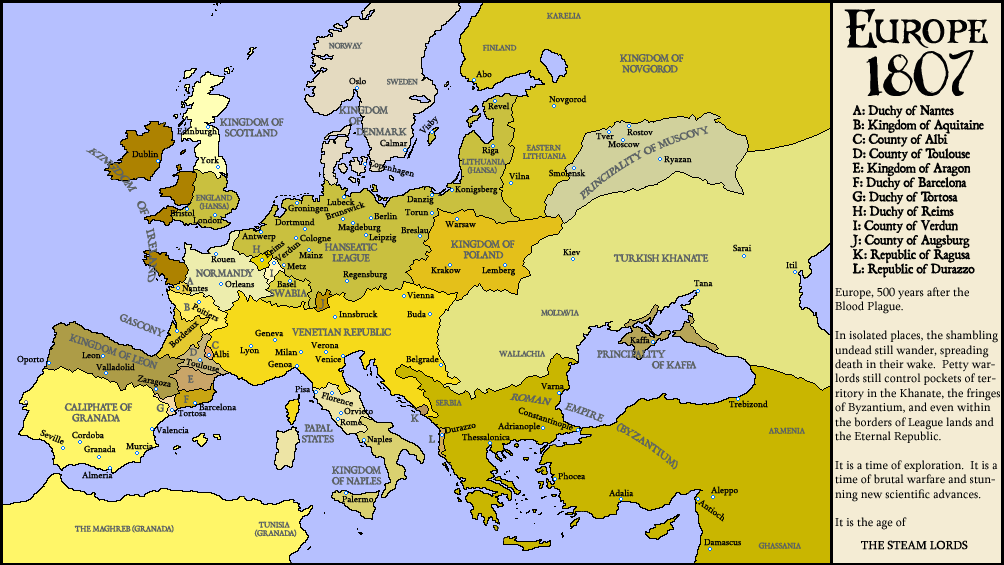 Closeup up on that "Saracens" scenario 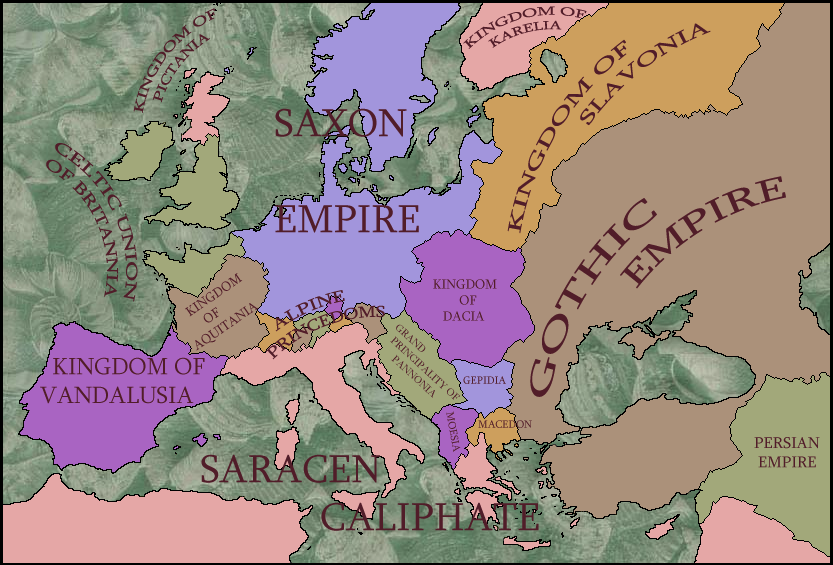 For some reason, this one has airships _and_ atomic weapons. 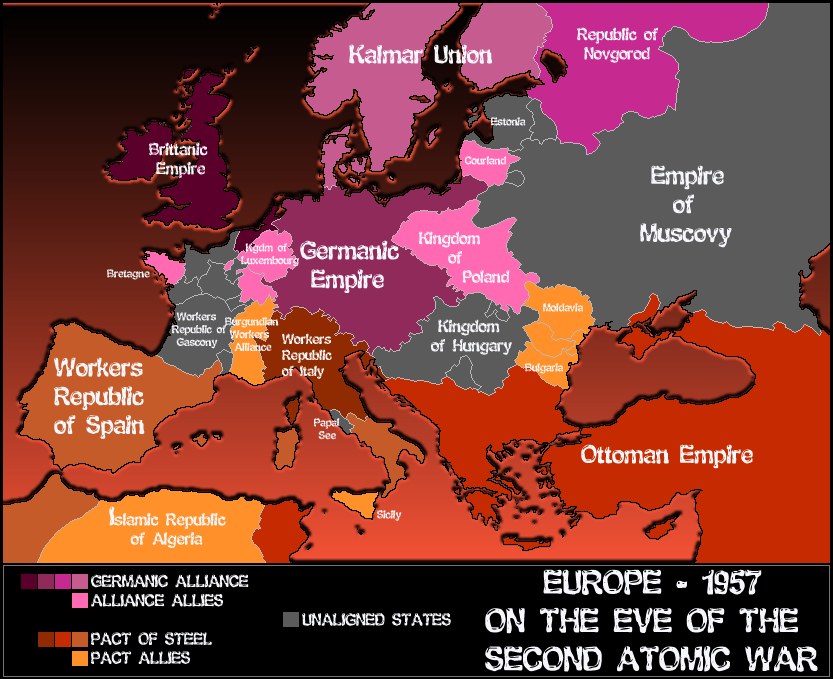 A wild duplicate has already appeared!

Again, the Papal estates get all Thicc. 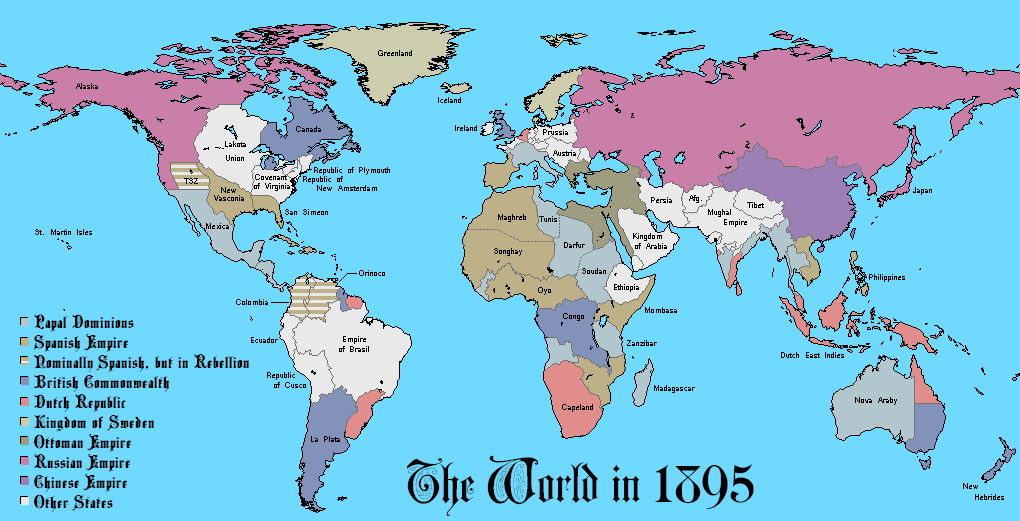 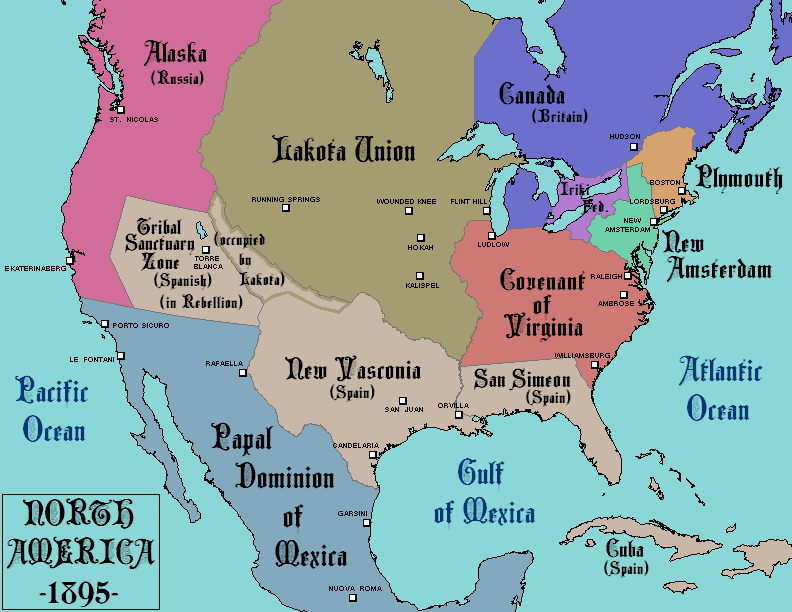 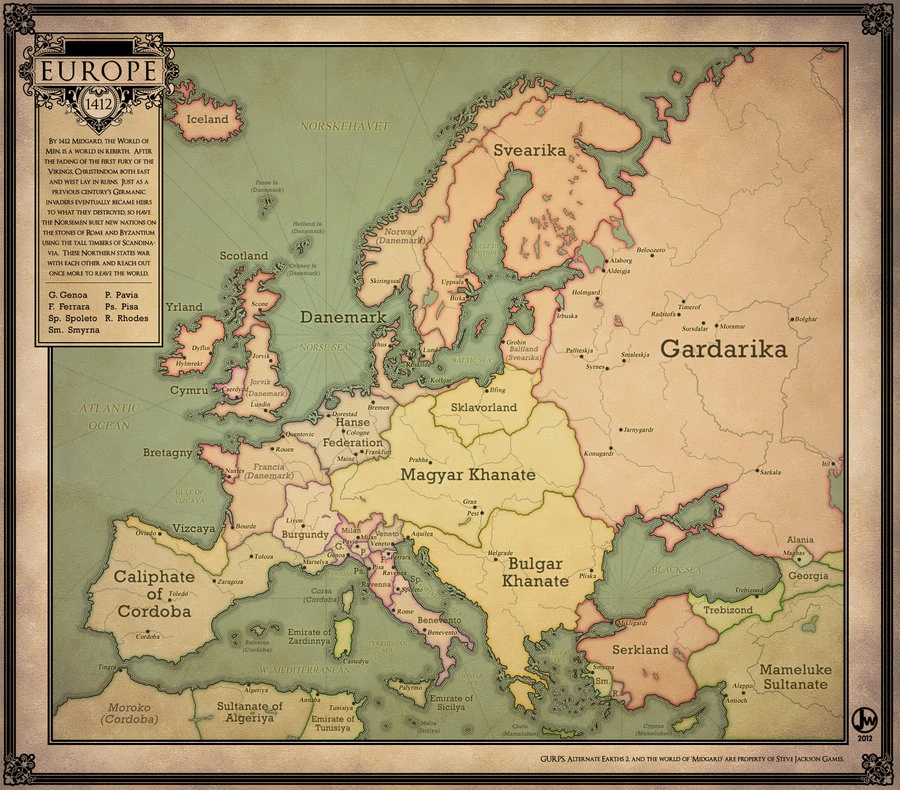 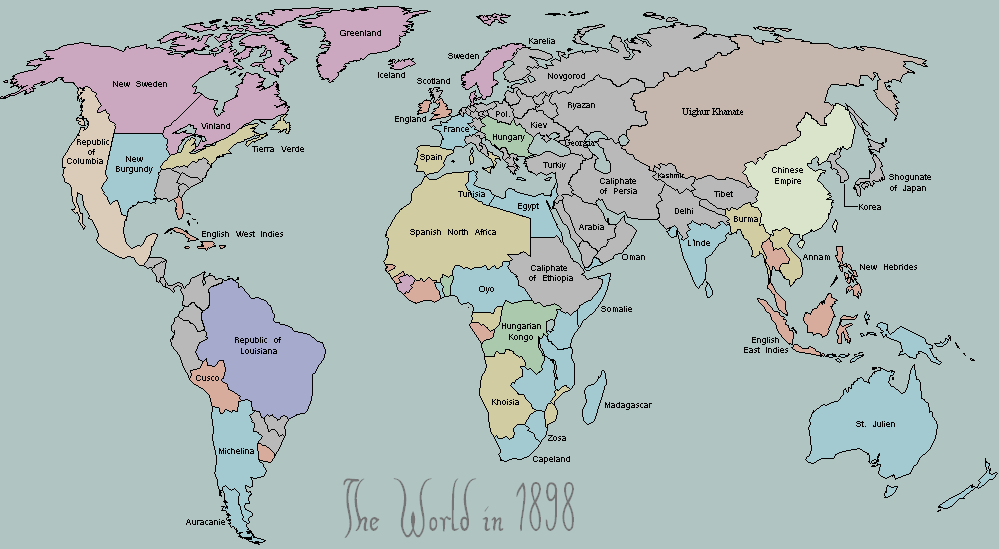 A variant on the above 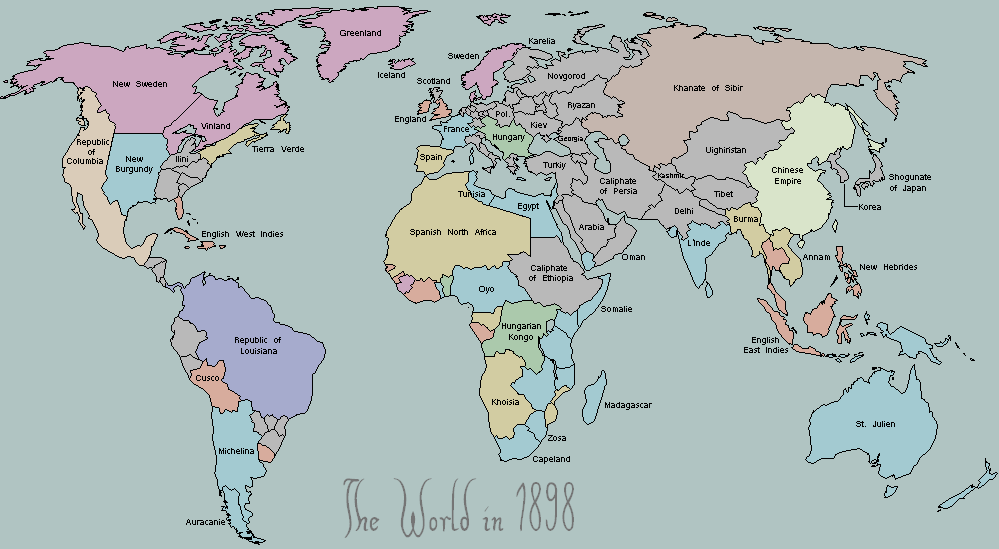 (One of those may be an edit by me. No idea when.) 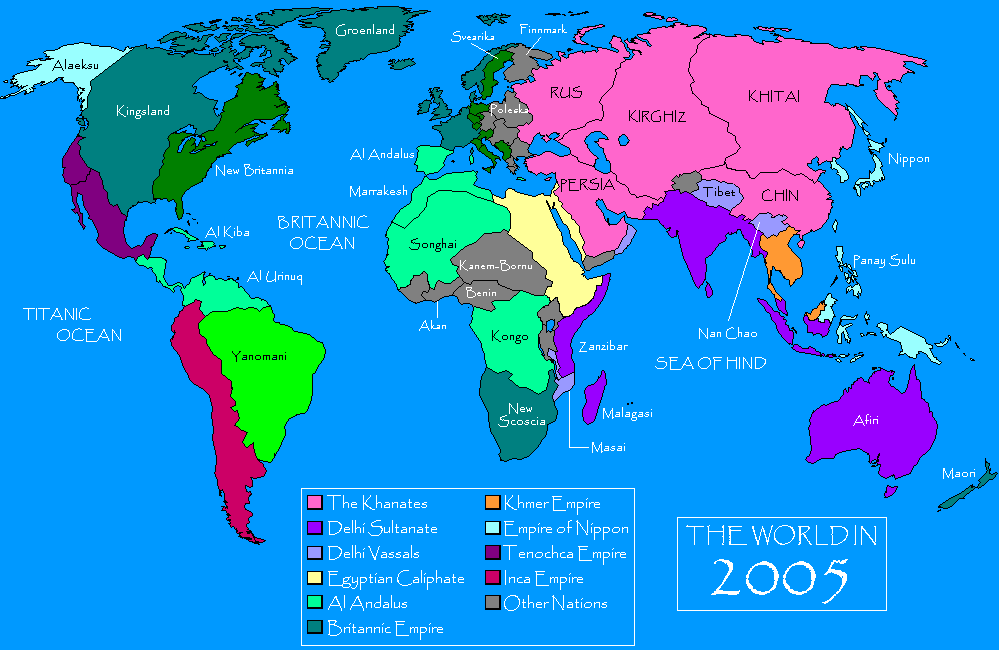