Take care Buddy and hopefully things improve for you.

The way I behave I doubt it, simply had to be more cool and nicer she's the best I've ever had (truely she planned even our holidays accordingly so that we were in a place were my physical disability would get better and even if I dislike it she always splits each bill fairly as she know we both are not made of money and besides valentines day and her birthday she doesn't want me to lose to much money as I need it for medications and such).
-
We decided to stay frinds for now (her suggestion I was unsure if we should continue to stay in contact overall), but will continue to go out together like we used to and we will see from where it leads from there or if we remain friends.
Last edited: Monday at 6:36 AM
Chapter 747: The Allied famines New

The Belgian League of Nations Mandate of Ruanda-Urundi had been given to Belgium, as the German Empire had been seen as to uncivilized and barbaric to have colonies anymore after the First Great War. However during the Second Great War, the Belgium colonial administration and Belgian government in Exile (as Belgium in Europe was split between the Dutch United Kingdom of the Netherlands and the French Empire) proved that they were not much better for the locals. Troughtout the war years the Ruzagayura famine plagued the region. Though initially caused by a drought, the famine's effects were made worse by the Belgian war effort as authorities tried to send agricultural produce to the Congo to support the Allies in other parts of West Africa, East Africa and the Middle East. The famine killed between a fifth and a third of the colony's population and displaced many thousands more. It led to numerous deaths and a huge population migration out of the territory and into the neighboring Belgian Congo and surrounding areas, causing a refugee crisis there and in the British Tanganyika Territory atop of local native uprisings and Axis Central Powers guerrillas already operating in these areas. The famine is considered to have begun in October 1943 and ended in December 1944. The principal cause of the famine was several prolonged periods of drought in the region in early 1943. However, the problem was exacerbated by attempts of the colonial authorities to send agricultural produce to other regions as part of the Allied war effort in the Second Great War. The colonial administration, together with Christian missionaries, began to transport food to a supply point in Usumbura. This would later cause anti-Western, anti-Christian tendencies so that some locals rather looked towards Mohammedanism or Coprospism. The Rwandan king, Mutara III Rudahigwa, sent aid to the affected region. By the time the famine ended in December 1944, between 36,000 and 50,000 people (between one-fifth and one-third of the total regional population) had died of hunger in the territory. Several hundred thousand people emigrated away from Ruanda-Urundi, most to the Belgian Congo but also to British Tanganyika and British Uganda. The migration also served to create further political instability in the areas affected by the mass influx of Rwandans. 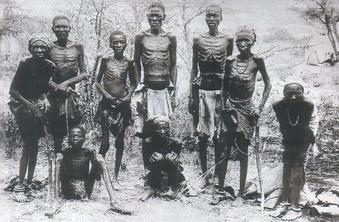 This spillover of the refugee crisis and local instability and uprising into the Kongo, Uganda and the Tanganyika Territory administrated by the British as a League of Nations Mandate was in the last also used by the Japanese Empire during and after the Second Great War to promote anti-Western, anti-Colonial and anti-Imperial Coprospist Propaganda in East Africa, just as they did in Asia and the Pacific. The Copropsist Co-Prosperity Sphere had learned to do so under Subhas Chandra Bose who had massively spoken out against the Bengal famine of 1943 (Bengali: pônchasher mônnôntôr) in the Eastern British Raj/ Azad Hind region, a devastating famine in the Bengal province of British India during the Second great War. An estimated 2.1–3 million, out of a population of 60.3 million, died of starvation, malaria, or other diseases aggravated by malnutrition, population displacement, unsanitary conditions and lack of health care. Millions were impoverished as the crisis overwhelmed large segments of the economy and catastrophically disrupted the social fabric. Eventually, families disintegrated; men sold their small farms and left home to look for work or to join the army, and women and children became homeless migrants, often traveling to Calcutta or another large city in search of organized relief. Historians have frequently characterized the famine as "man-made", asserting that wartime colonial policies created and then exacerbated the crisis. As a result Netaji (Hindustani: “Respected Leader”) Subhas Chandra Bose spoke out even more frequently against British Colonial Rule and amassed many supporters that later the year helped him establish the newly formed the Provisional Government of Assam-Bengal/ Azad Hind in the Eastern Part of the former British Raj. 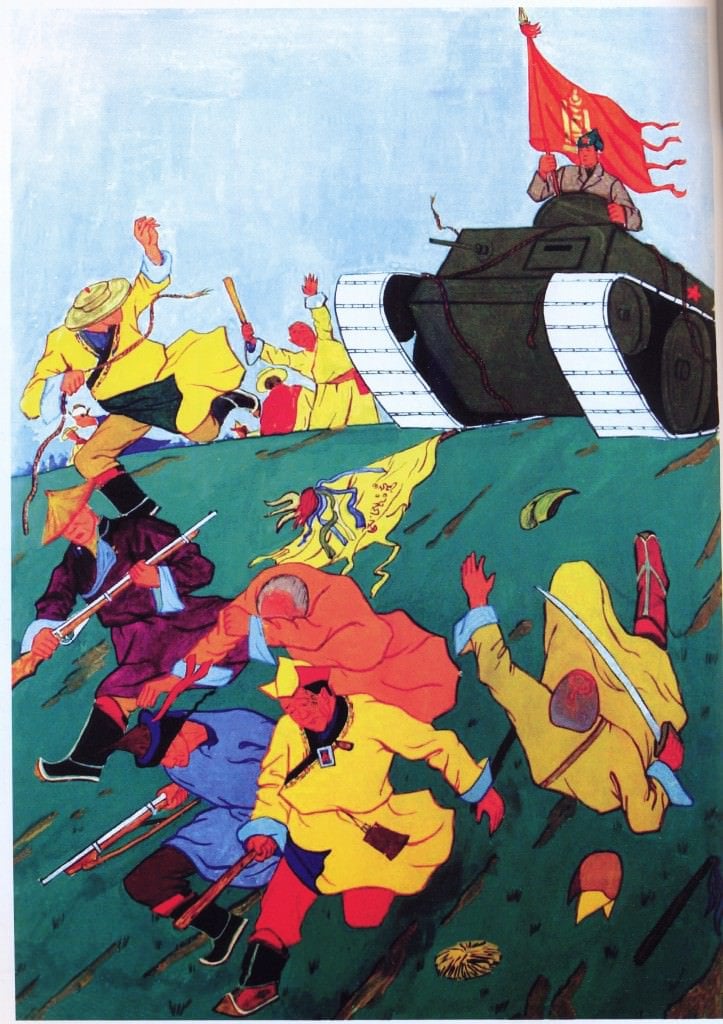 Inside of Mengjiang/ Mongolia Buddhism had been a influence since the 13th century, when Vajrayana, Buddhism came from Tibet with the Yuan dynasty (1271-1368) emperors' conversion to Tibetan Buddhism. It's influence increases after the Dalai Lama becomes the Tibetan King as well as advisers for Mongolian leaders and under Tibetan influence new laws are created to limit hunting, as well as sacrifices of women and children, while new churches, temples and schools were build. From then on Buddhism shaped the mongol culture and society, even other nearby nomadic tribes, like the Kalmyk's and Buryats started to become Buddhists. Buddhism in Mongolia derived much of its characteristics from Tibetan Buddhism of the Gelug and Kagyu lineages, but is distinct and presents its own unique characteristics. Buddhist artist and king Zanabazar (1635 to 1723) was a mongol Lama who studied in Tibet. His art and work would influence Mongol art for two centuries to come. He was also a poet, philosopher, linguist, scholar and builder of churches and temples and a man of the state. The Mongols returned to shamanic traditions after the collapse of the Mongol Empire, but Buddhism reemerged in the 16th and 17th centuries. Mongolian shamanism (Mongolian: Бөө мөргөл — Böö mörgöl in old Mongol, Buu, Buuto or Buudo in Mengjiang), more broadly called the Mongolian folk religion, or occasionally Tengerism, refers to the animistic and shamanic ethnic religion that has been practiced in Mongolia and its surrounding areas (including Buryatia and Inner Mongolia) at least since the age of recorded history. In the earliest known stages it was intricately tied to all other aspects of social life and to the tribal organization of Mongolian society. Along the way, it has become influenced by and mingled with Buddhism. During the socialist years of the twentieth century it was heavily repressed and the control of Marxism-Leninism in the Mongolian People's Republic had not only ended feudalism until 1942 but destroyed over 500 Buddhist temples and churches in roughly ten years. 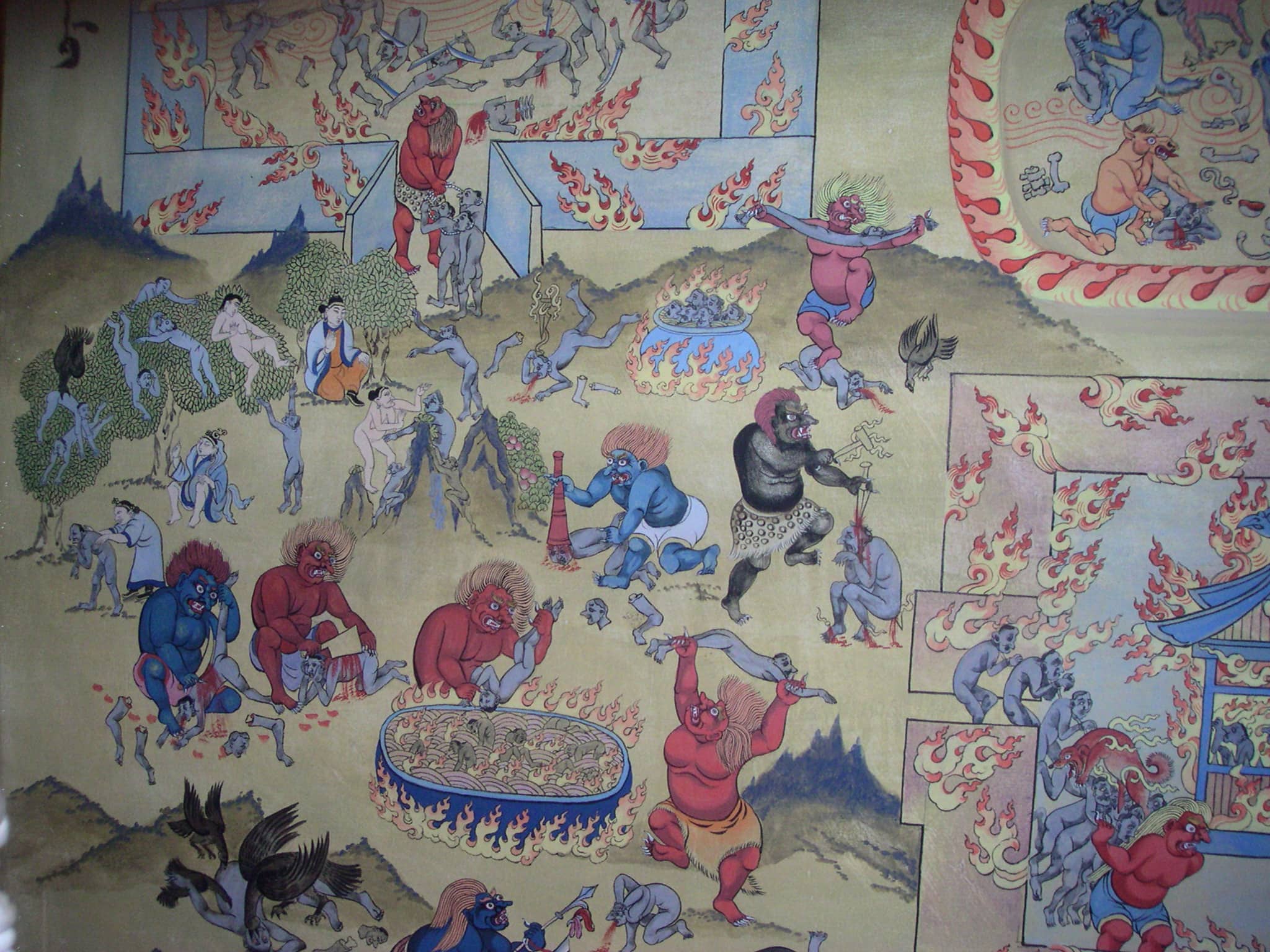 Therefore the Mengjiang Khanate in Outer Mongolia declared Mengjiang/ Mongolian Buddhism and Yellow shamanism the officially State Religion of Mengjiang under the name of Buu, Buuto or Buudo, were Yellow Buddhist Shamanism and Black Mongol Shamanism were fused together as a new religious ideal and ideology. Yellow shamanism as a term was used to designate the particular version of Mongolian shamanism which adopts the expressive style of Buddhism. "Yellow" indicates Buddhism in Mongolia, since most Buddhists there belong to what is called the Gelug or "Yellow sect" of Tibetan Buddhism, whose members wear yellow hats during services. Mongolian Black Shamanism is centered on the worship of the tngri (gods) and the highest Tenger (Heaven, God of Heaven, God) or Qormusta Tengri. In the Mongolian folk religion, Genghis Khan is considered one of the embodiments, if not the main embodiment, of the Tenger. Because of this the Mausoleum of Gengis Khan later build by Khan Demchugdongrub was seen as one of their most holiest temples/ shrines as well as a important traditional center of worship. Under his radical re-buddhistization all destroyed temples were rebuild, or build completely new from the ground inside the Mengjiang Khanate and captured atheist socialists and communists, who had helped with their destruction, the government or the military of the Mongolian People's Republic were often shot on the spot without much of a trial. Thanks to some help by the Japanese, the Mengjiang Khanate became a Co-Prosperity Sphere Member State that was once again proud of their Buddhist heritage and intent to spread their traditions and culture across all of former Mongolian lands once again, deep into Central Asia and Siberia. Inside this new combined Black Shamanic Mongol and Yellow Buddhist Shamanic fused religion of Buu, Buuto or Buudo, Khan Demchugdongrub also known as Prince De or Teh, himself was seen as the reincarnation of the Lama/ Khan, who's previous incarnation reign had ended in 1924 before. That was also one of the reasons, why his reconquest of Outer Mongolia (the Mongolian People's Republic) leads to the reopening and rebuilding of nearly all Mongol Buddhist temples, shrines, sides and holy places that the Communist had previously destroyed or nearly destroyed before, leading to another bloom of Buddhism/ Shamanism under Buu, Buuto or Buudo in the Mengjiang Khanate.
Threadmarks
You must log in or register to reply here.
Top
Top