I made it. 1988 Dukakis/Jackson ticket on normal. 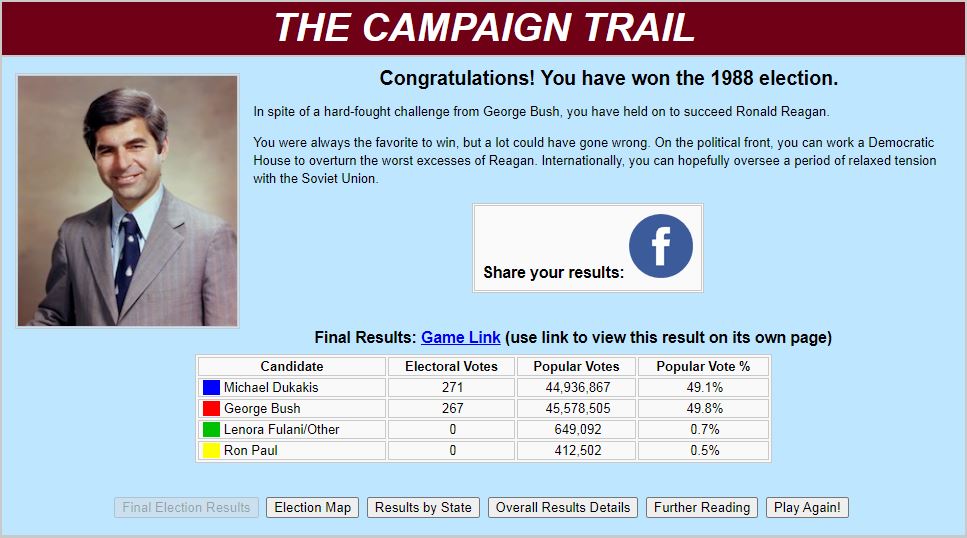 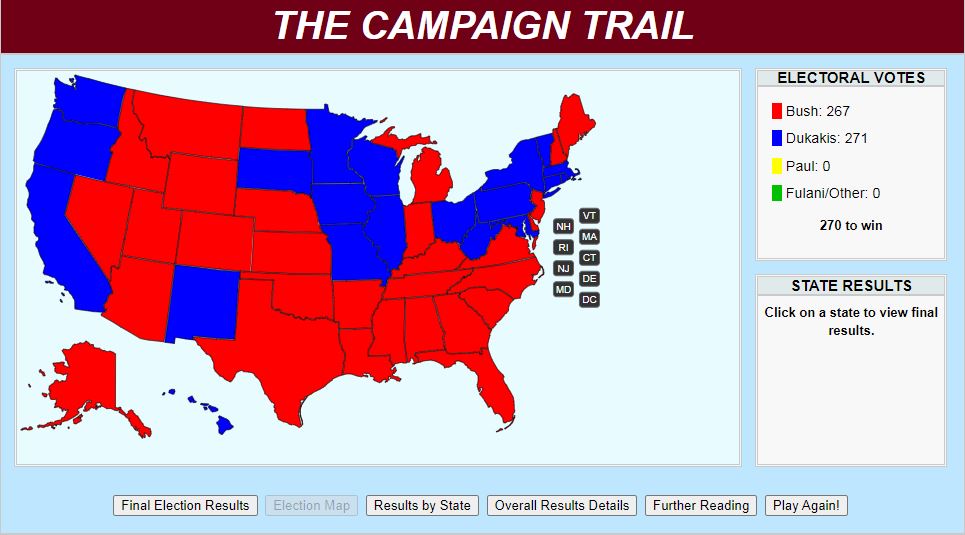 Lost Michigan after a hard protectionist turn, but it was a worthy sacrifice for Ohio and the electoral vote victory.

I've been doing a bit of a thing

The 2020a game relies a whole lot on luck. When the first info about changing the difficulty in the console commands was revealed however many months ago, I had thoughts about looking into the code to try to modify stuff and get the best questions possible, to have a "perfect game" of sorts. So I looked around in the code and had no idea what the fuck I was doing, and gave up nearly immediately. But having found the subreddit and having seen some basics of the code, I figured out how to do it, sort of

When the game first loads, it picks all the questions at that time. But you can go into the code and swap out questions. Then you can go into the console and paste the modified game, you can't change the first question (I think?) but can change the rest. IIRC this is how the people on reddit are making the modified games, which has the limitation of only being able to have 25 set questions rather than a larger bank of questions you can get by chance. But that's beside the point

Long story short, just paste the code in the spoiler below into the console once you are on the first question, and then go from there. I'll probably maybe do it for Trump too if I don't get lazy, but so far, here's one for Clinton. I don't know if this is the best possible game, but it is close at least, getting the big ones like the shooting at the Trump rally, Trump fainting, and Trump attacking Clinton in a way that backfires a couple times, plus taking out the questions that hurt, like the FBI stuff, Clinton falling, the recession, and so on. With the questions that don't have as big of an impact, its a bit more complicated to find which ones are best since there's multiple ways questions have effects, nationally, on the individual issues, and state-by-state, and I've been too lazy to look through all the code, but I'm pretty sure these ones are at least halfway decent

This should theoretically be a possible result one can get in a regular game, if you get lucky enough and get the right questions

To compare, this one is the best I've gotten with a regular game

So, I got around to doing the same as above with Trump(/Christie) for 2016, to find what might be the best theoretically possible game (or at least close to it)

The link to the code is here, again just paste it into the console when you are on the first question

While Clinton starts with an advantage, it seems like Trump has more opportunities for rare events to shift things more in his favor

Here's a game on normal, where Trump wins a whopping 49 state victory, just losing Hawaii and DC, and getting a 60.5-35.7 percent popular vote victory, a 24.8% margin - 79.5 million votes to Clinton's 47 million, for a raw vote margin of 32.5 million. Compare that to the Clinton win, a landslide itself but one where Clinton merely got the largest popular and electoral vote since Reagan, and lost 12 states, while Trump gets the largest popular vote win since Coolidge in '24, and (ever so narrowly) the largest electoral vote win since Monroe in 1824 if I'm not mistaken

Col. Angus said:
While Clinton starts with an advantage, it seems like Trump has more opportunities for rare events to shift things more in his favor
Click to expand...

Awkwardvulture said:
How did you play 1980?
Click to expand...

I do wish that you could play McCarthy or Henry Wallace or Thurmond.

Hindustani Person said:
I do wish that you could play McCarthy or Henry Wallace or Thurmond.
Click to expand...

McCarthy might require primaries to be implemented and Thurmond might require interacting with local Democratic parties to become their official candidate or else run as third party one. As for Henry Wallace, the gameplay will depend only on decisions taken by Truman: the player would have to hope Truman goes full right-wing on foreign policy and civil right to even have a chance to have votes. 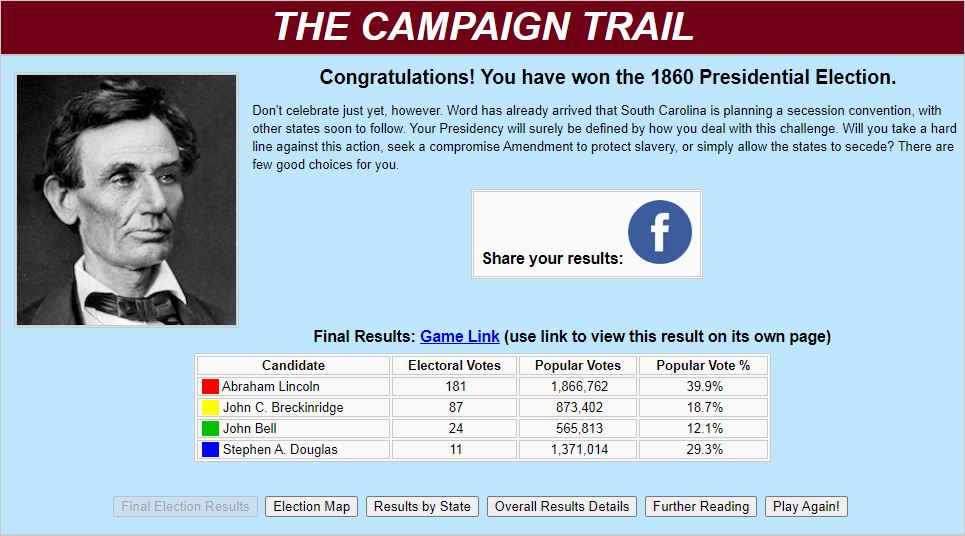 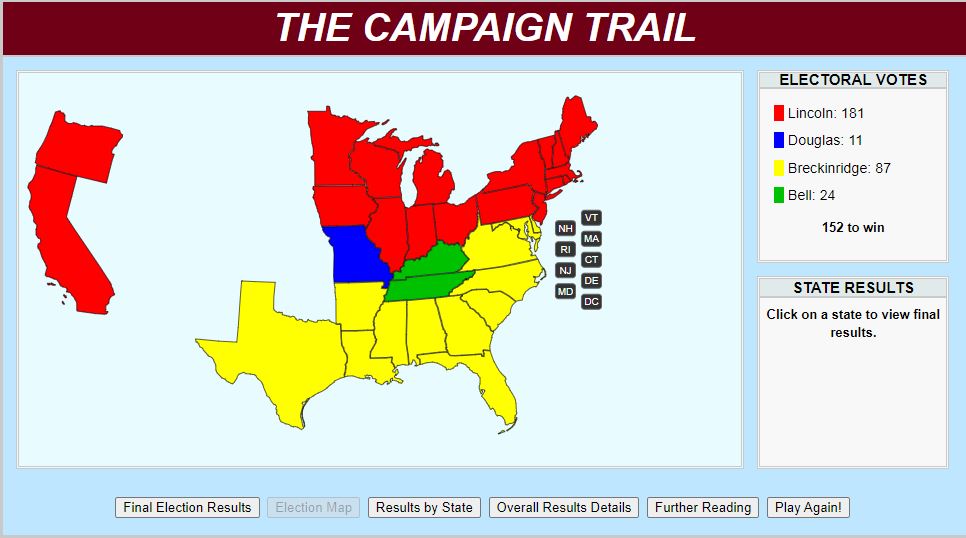 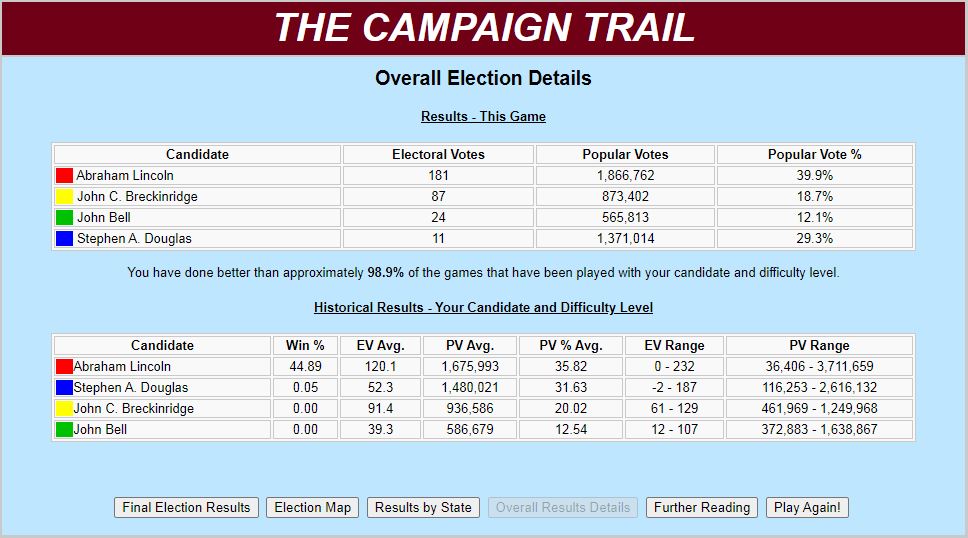 Only 98.9%? How am I supposed to score higher than this as Lincoln?

Great result with Ford on Normal; picked Baker and mixed moderate answers with a few appeals to the Reaganites (opposing Roe, the "reducing government" answer), won OTL Ford + OH, WI, PA, MS, HI. I think I could have won New York if I used my visits better, though.
Last edited: Mar 20, 2021

Admiral Fischer said:
Only 98.9%? How am I supposed to score higher than this as Lincoln?
Click to expand...

Admiral Fischer said:
Only 98.9%? How am I supposed to score higher than this as Lincoln?
Click to expand...

Lots of people mess with the code for 100% wins.

I am now imagining Georgia going for Abraham Lincoln despite him not even being on the ballot there.

TimTurner said:
I am now imagining Georgia going for Abraham Lincoln despite him not even being on the ballot there.
Click to expand...

Possible by enfranchising the slaves.

Played as Bryan on normal, got a good but not outstanding result, and look at this. 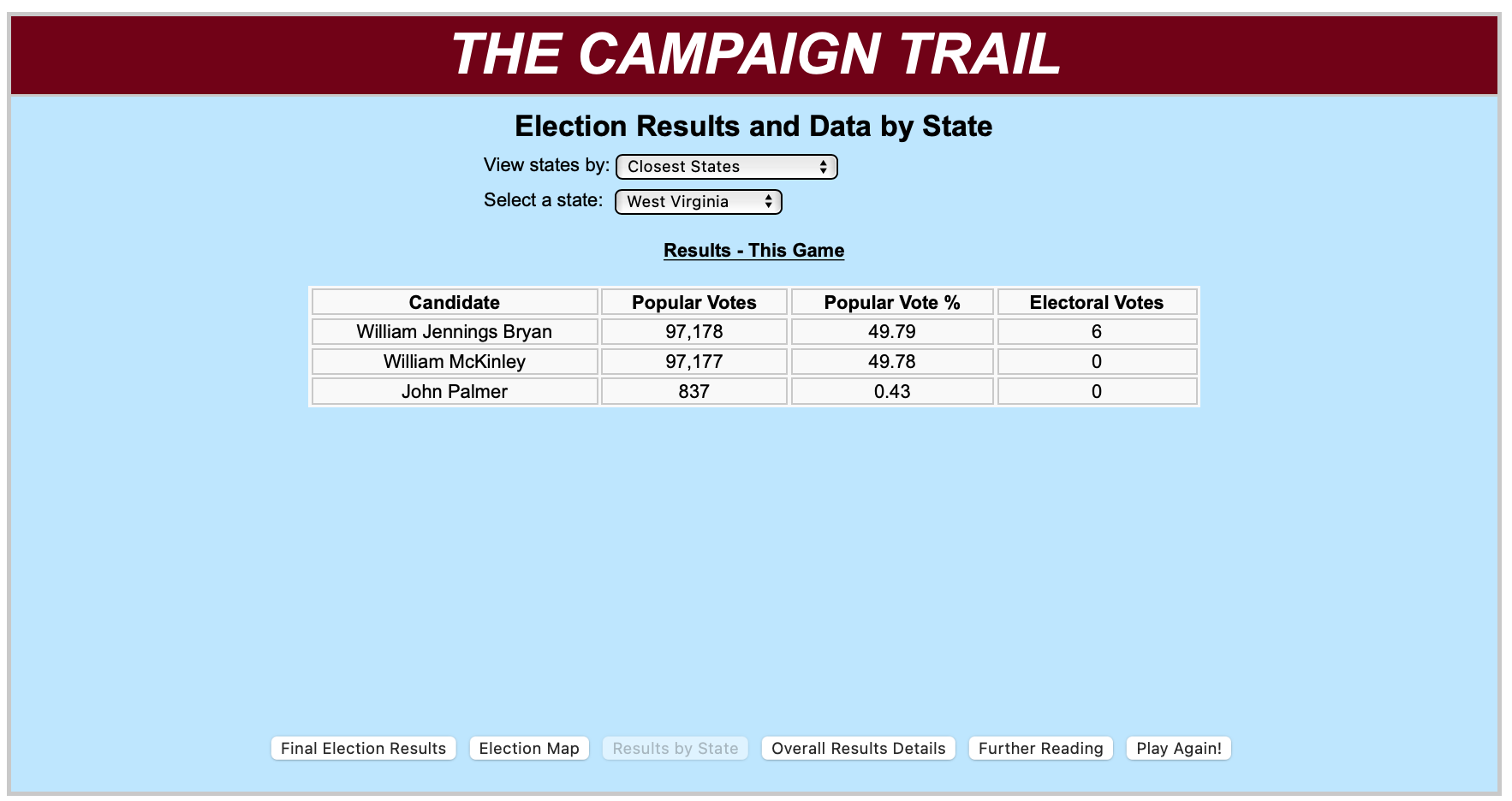