Brady777 said:
I’m going to assume the guy will add 2020 in the next week or he’s working on more elections or he’s busy I’m supried I was able to wait this long for it I don’t play the game at all any more because I know how to win every election the worst case is that he might add it in the summer he never answers his emails so we will have to keep waiting
Click to expand...

Yeah, it's pretty sad he doesn't answer his emails, there are a lot of questions I'd be interested to hear the answer to. I wonder if he knows about this thread.
I think there's so much more potential in Presidential Election games and except for this one and President Infinity you just have stupid fictional flash games and Satire stuff.
I really want more election simulators/games!

Barely won as Dukakis on impossible, though I lost the popular vote. I picked John Glenn as running mate, was very moderate, and attacked Bush at every opportunity. 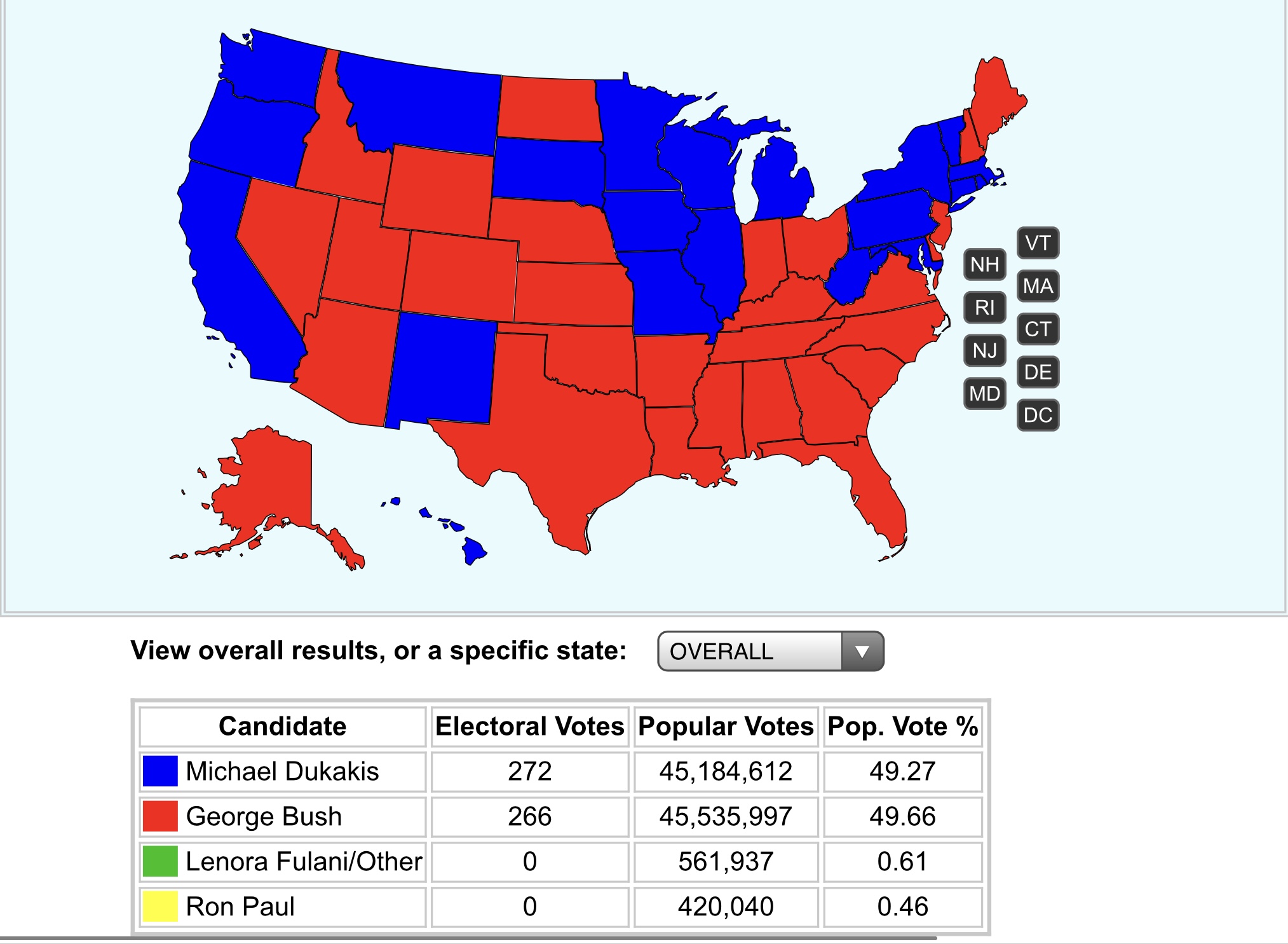 So I've been playing this for a month or so and I something I've noticed is the 1988 scenario seems too easy for Bush even on impossible.

My best game ever considering all the elections, without cheating. Also the first time I got more than 500 EVs, winning 44 states. Although on easy, this is probably the largest landslide possible with Carter, as the closest Ford state, Arizona, was lost by 4.5 points. I campaigned mostly in Kansas and Indiana, followed by Connecticut, Michigan, New Hampshire and Vermont.
Notably I won Colorado by 0.32% (3.600 votes) without even campaigning there.
Other closest states: Vermont (1.500 votes/0.84%), Kansas (20.800 votes/2,09%), Indiana (58.000 votes/2.52%), New Hampshire (12.200 votes/3.49%), Connecticut (53.000 votes/3.93%).
I made Wyoming R+7 !!! At the same time I won tipping point Iowa by just 9.55%. It's incredible how the country was less polarized back in the 70s...
I apologized for Playboy, had a lucky debate, went middle of the road in the relation with the Soviets, and gave non-committal answers on abortion, death penalty and the economy. 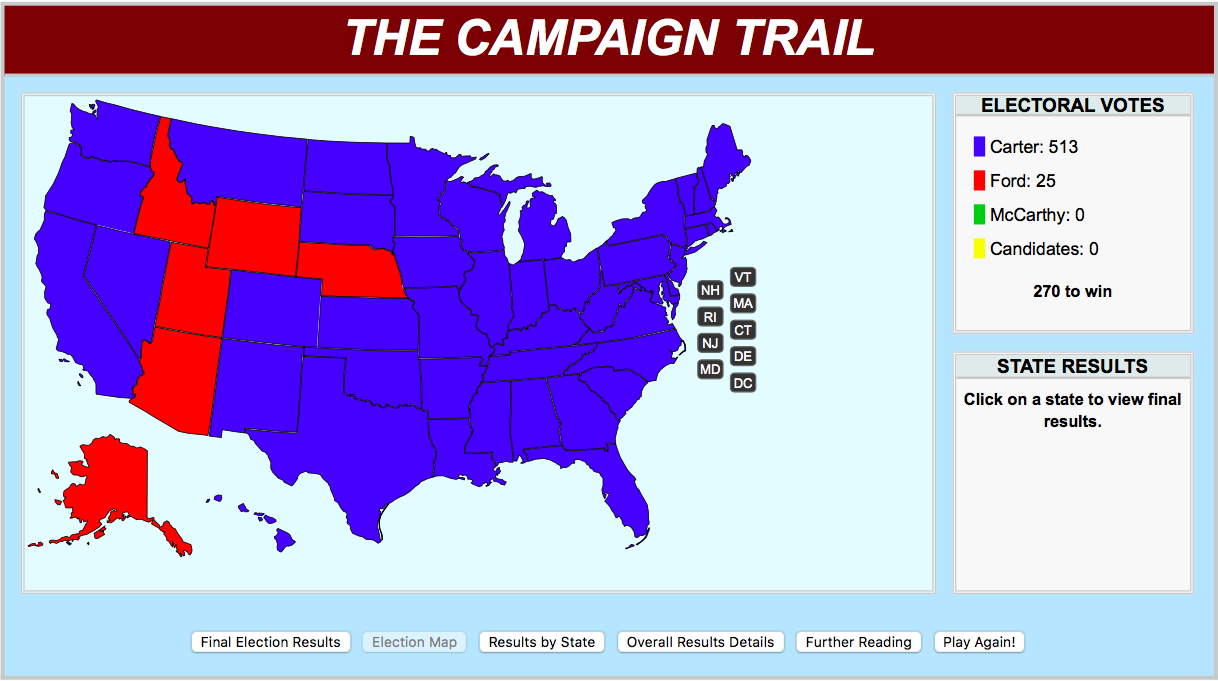 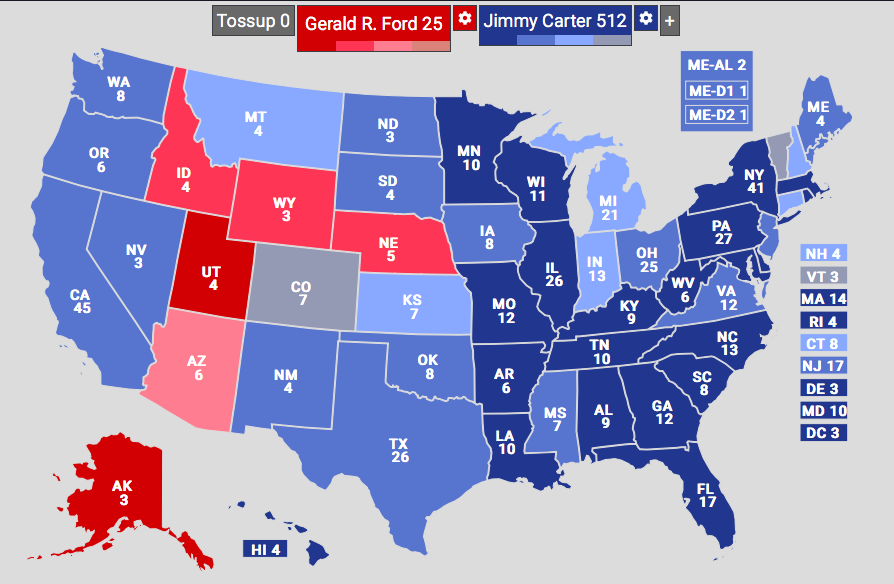 My best performance ever as Bryan in 1896, playing as normal: The site said that this is better than 77.6% of the games as normal as Bryan. Its the first time I've carried Iowa and I think Illinois as Bryan. I've won as Bryan before, but it usually involves sweeping the South and West, including the West Coast, carrying all the border states but Maryland, plus Indiana, though I have had a few wins where Bryan carried New York.

I took the advice of other commentators, had Stevenson as my VP, and did not go to the West Coast, though I did campaign in the border states. I made the single speech in New York for the publicity, and did not get the Tammany Hall or Hearst questions. Questions were pretty standard. I made a strong appeal to the industrialized workers, campaigned with Atgeld, went easy on Cleveland, appeased the South, was anti-tariff but moderate about it, and pro-income tax, and resisted the temptation to come out in favor of nationalizing the railways.

Bryan got 51.9% of the nationwide popular vote in this game and 264 electoral votes. He carried every state west of the Mississippi except for Minnesota, and all the southern states and border states except for Maryland, along with Indiana and illiinois. But I nearly did even better. The only state outside of New England where McKinley got over 55% of the vote was Pennsylvania, where he got 55.1%. The McKinley margins in Minnesota, Michigan, Ohio, and Maryland were less than 2%, and he carried Ohio by less than 5,000 votes.
You must log in or register to reply here.
Top
Share:
Share
Top