waiting for the next one

Sorry, been busy with personal life lately. Expect the next update to come tomorrow.

Unfortunately, something happened with my computer that erased my update and I forgot to save it. I'm sorry I cant maintain my promise but I promise, for real, that the next update will be out next week.

SunKing105 said:
Unfortunately, something happened with my computer that erased my update and I forgot to save it. I'm sorry I cant maintain my promise but I promise, for real, that the next update will be out next week.
Click to expand...

In a serene and beautiful room, there lay a dead body. Not just any dead body, but the body of Alexander the Great, the greatest man to have ever lived. He cut the twisted knot at Gordium, endured illness in Cilicia, changed geography when he took Tyre, put the Great King himself to flight, and braved the mountains of Bactria and monsoons of India. He conquered the largest empire the world had ever seen up to that point, and his deeds were indeed legendary. But here he was, his body lying lifeless on his deathbed, while the generals brawled and argued.

One in the palace, however, kept a cool and clear head. That was Tashereniset, daughter of Necatanebo II and wife of Alexander. She was determined to secure the way for her son, 7 year-old Argaeus, and soon afterwards Roxana, Stateira and Parysatis mysteriously disappeared. Some say that Tashereniset arranged their murder. But we will never know for sure.

Meanwhile, some semblance of order had been restored in the room, and Argaeus was proclaimed King, with Perdiccas as regent. The commanders and cavalry swore an oath, but the infantry did not take kindly to this. Meleager, an infantry captain, seized power and forced Perdiccas out of the city. Perdiccas and the cavalry set up a blockade, and Meleager was forced to back down as dissident elements in his army became louder. Knowing his imminent death, Meleager fled to an altar, but the altar was filled with dirt and bricks and Meleager starved to death.

Perdiccas had overcome Meleager and confirmed Argaeus and Philip Arrhidaeus as joint kings, to prevent any further rumblings. The empire was partitioned out at Babylon. Memnon, the old hangover from the Achaemenid days, was given Hyrcania and Parthia. Antipater was confirmed in Macedonia, while Craterus was given Cilicia. Asander was given Caria, Antigonus confirmed in Greater Phyrgia, Menander being given Lycia, Peithon received Greater Media, Eumenes receiving Cappadocia, Peucestas receiving Persia, and Ptolemy received Mesopotamia after pressuring Perdiccas, for he had stayed loyal during the uprising of Meleager. Leonnatus was given Hellespontine Phyrgia, and other figures were given and confirmed satrapies as well, but we need not to go into detail.

Almost immediately, cracks began to show in this agreement. In the west, the Greeks had risen in revolt in what is now known as the Lamian war, while in Asia, Greek mercenaries in Bactria had risen in revolt, and the renegade Cappadocian King, Ariarathes I, still held out. Memnon was assigned to deal with the mercenaries, the reasoning being that if Memnon tried to use them, his power play would fail because he was Greek and the other satraps were not keen on supporting his ambitions. Perdiccas also sent orders directly to the sub-commanders within Memnon's army, but Memnon hid and destroyed the orders and promised to pay and return to Greece the mercenaries if they would support him. The mercenaries agreed, and Perdiccas sent orders to Peithon, to deal with Memnon. Peithon had no intention of letting Memnon gain power, but Memnon occupied him in a war in the Upper Satrapies. At the same time, Peithon's attempts to advance his ambitions in the Upper Satrapies earned him the animosity of the other satraps in the region, they refused to help.

Meanwhile, in the west, Ariarathes was running free in Cappadocia, and Craterus and Antigonus refused to help, and actually entered into secret negotiations with the Cappadocian King. Perdiccas led the royal army and defeated Ariarathes, and Eumenes was installed as satrap. Eumenes would have a big part to play in the unfolding saga.

Meanwhile Necatanebo II was biding his time and waiting what would happen. His realm was not a part of the Empire, but his position as ruler of Egypt and grandfather to the king allowed him to interfere with the unfolding conflicts, and to play off the various Diadochi factions against one another to avoid the possibility of an invasion. He had encountered Macedonian phalangites when he sent auxiliaries to aid in Alexander's conquest of the Levant, and Necatanebo II knew he would need to restructure his army. The downfall of the Persians had freed up many resources previously used for fending off Achaemenid invasions, resources he could use to make Egypt a great power once again.

The Greeks had risen in revolt, and put Antipater under siege at Lamia after defeating him at Thermopylae. The Greeks were still besieging the city when their fleet had been defeated at the Battle of the Amorgos and news arrived that Leonnatus had come to reinforce Antipater. Leonnatus was defeated by Antiphilus, the commander of the Greek forces since Leosthenes had died, and an attempt by Antipater to escape from Lamia was rebuffed, but some of his forces did escape. Craterus linked up with the remnants of Antipater's army and defeated Antiphilus, although Antipater was killed as he and his garrison joined battle outside the fields of Lamia. Craterus made separate peaces with each of the cities, with the Athenians being treated harshly. Only those with 2,000 drachma or more were allowed to remain citizens. The Greeks had been subdued once more.

But this was all preliminary, the calm before the storm. This was only the beginning. The empire was about to be torn apart, and in the chaos some would earn a name for themselves, while others perished in distant battlefields. But in Egypt, a certain particular Pharaoh was biding his time, and watching as the Empire collapsed... 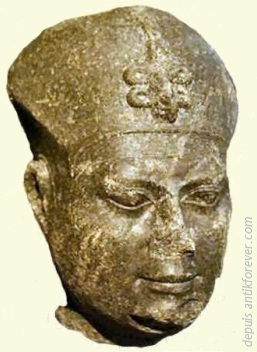 [1]- ITTL, Plutarch or any other ATL sources don't get that piece of information detailing the death of Alexander's other wives, hence why I decided to make sound like they "disappeared" when Tashereniset actually arranged their murder.
Last edited: Aug 24, 2019

SunKing105 said:
Now it was time, to do what others before him had failed to do, reconquer Egypt. He gathered a massive army, consisting of 300,000 infantry, 30,000 cavalry, and 14,000 Greek mercenaries. With his preparations complete, Artaxerxes launched his invasion. Necatanebo II resisted with 100,000 Egyptians and 20,000 Greek mercenaries.
Click to expand...

How the heck does an army a third the size if its foe not only defeat the larger force, but rout it?

Dathi THorfinnsson said:
How the heck does an army a third the size if its foe not only defeat the larger force, but rout it?
Click to expand...

While the Persians have superior numbers, most of it is composed of poor infantry levies and they have less high-quality Greek Mercenaries than the Egyptians. The Egyptians basically attacked the flanks with the mercenaries and made rapid progress, eventually leading to a rout.

SunKing105 said:
While the Persians have superior numbers, most of it is composed of poor infantry levies and they have less high-quality Greek Mercenaries than the Egyptians. The Egyptians basically attacked the flanks with the mercenaries and made rapid progress, eventually leading to a rout.
Click to expand...

"Holy shit these guys are running, we must have lost the battle. QUICK, EVERYONE RUN!"

Repeat that like ten times and everyone ends up running for real. Everyone looks immensely ashamed once they finish regrouping and find out they lost to a force they outnumbered like 10x1.

"Holy shit why these guys are still advancing on us? Clearly they must have more troops coming with them! EVERYONE RUN!"

And then it turns out there was no "more troops", this is just a bunch of guys attacking them because they have no idea their side is losing and being routed, or were told to retreat.

Well details on the battle between Artaxerxes III and Necatanebo II are very sparse, all I could find was that in OTL, the Greek Mercenary generals outflanked and surrounded the Egyptians. Here it’s the Egyptians outflanking the Persians with the aid of Mentor, a skilled mercenary general. So yeah that’s kinda what I had to go with.
Threadmarks
You must log in or register to reply here.
Top
Top