Ok, so the British football team is really good ITTL.

Quick question - is the UK team just for the UK, or for the entire Commonwealth?

Quick question - is the UK team just for the UK, or for the entire Commonwealth?
Click to expand...

Technically it's the UK, the Crown Dependencies and the Overseas Territories (not that the latter two really matter but Matt Le Tissier has a far more substantial international career TTL). In practice, good footballers from around the Commonwealth could pretty easily qualify for the UK if they wanted to because of the shared Commonwealth citizenship but as a result, other good Commonwealth teams (notably Australia, Rhodesia and East Africa) tend to cap players young to avoid that.

Basically the origin of the improved British football team is one major POD and then a bunch of ripples. In the early 1930s OTL Arsenal wanted to sign a couple of Austrian players but were blocked by the FA. TTL these transfers go through and Matthias Sindelar and Rudi Hiden come over, where they introduce British football to central European influences and further develop the game. After 1945, this development feeds into the FA and the wider footballing culture leading to greater influence being given to Walter Winterbottom, whose OTL plans to farm out British managers around the world to improve their coaching and create a unified UK team TTL come to fruition. (Winterbottom is made minister for sport in 1960 and can enforce his will on the authorities greater.) As a result, Vic Buckingham develops Total Football in Britain with Arsenal and the national team rather than moving abroad and Cruijff moves to Britain when he leaves Ajax. British football then develops into a hyper energetic but also hyper technical game, with the stereotypical British style being something like how OTL Klopp's Liverpool teams play.

As a Welshman, I'm fairly sanguine about a UK football team at World Cups. Would the Home Nations Championship still be run? And would there be separate representation at any UEFA organised event (if UEFA exist ITTL?)
Please tell me that there is still separate representation in Rugby Union (with the Lions tour every four years). And can I make a request that Wales win a World Cup at some point? Fed up of getting to semi-finals and ending up being the gallant losers

Dr Dee said:
As a Welshman, I'm fairly sanguine about a UK football team at World Cups. Would the Home Nations Championship still be run? And would there be separate representation at any UEFA organised event (if UEFA exist ITTL?)
Click to expand...

Plus, Neville Southall, Gareth Bale and Aaron Ramsey have all won the World Cup so that's something too...


Dr Dee said:
Please tell me that there is still separate representation in Rugby Union (with the Lions tour every four years). And can I make a request that Wales win a World Cup at some point? Fed up of getting to semi-finals and ending up being the gallant losers
Click to expand...

Yes, Rugby Union still competes with separate teams for the Home Nations. The first World Cup is in 1947, when it was contested between Australia, Canada, England, Ireland, New Zealand, Scotland and Wales as a round-robin played over the course of the Northern Hemisphere season. This remained the case for the next three tournaments and in the 1963 tournament South Africa was kicked out in favour of the Pacific Islands. From the 1967 edition onward France was invited in and it became a month-long tournament (two pools, semi-finals and a final) with a rotating host. From then on it has been progressively expanded to a total of 24 teams. I've not finally decided on the list of winners (my sports are football, cricket and baseball really) but will post it when I've got a list I like.
Cricket: International Cricket League New

The ICC International Cricket League, commonly known as the International Cricket League or the ICL, is an international cricket competition contested by senior men's national teams. A total of 20 countries compete across four divisions, with four teams in each division. The four winners of each division enter then enter into playoffs culminating in the Championship Series to decide the winner. It is the oldest international sporting competition in the world, having been contested (with breaks during the Great War and World War) since 1910.

The 34 ICL tournaments have been won by nine national teams. Historically, Australia, Great Britain and the United States have been the most successful teams, having won the competition eight, seven and five times, respectively. However, the most successful streak in the competition's history came when the West Indies won six successive tournaments from 1976 to 1993, on each occasion without losing a series. The other ICL winners are India, with three titles; Pakistan, with two titles; and Kerala, Puerto Rico and Zulu-Natal with one title each.

The first ICL took place in 1910-11 and was contested in a round robin format between Australia, Great Britain, Ireland, South Africa and the United States and was won, unexpectedly, by the United States. The 1912-13 series was cancelled midway through, owing to the outbreak of the Great War but the first four tournaments after the ending of hostilities were contested on the same round robin basis. India, New Zealand, West Indies, Canada and China (although this was effectively just a Hong Kong XI) joined for the 1927-29 season, when the competition was changed to the division-and-play-off format that it has used ever since. The competition has progressively expanded its membership in 1949 (with the additions of Bengal and Pakistan), 1952 (East Africa, Ceylon and Rhodesia), 1982 (Afghanistan and the Trucial States) and 1991 (Kerala, Papua New Guinea, the Netherlands and Zulu-Natal) so that it now includes 20 nations. (South Africa, a founding member, was expelled following the end of the 1961-63 season and has not, as of 2020, been readmitted.) 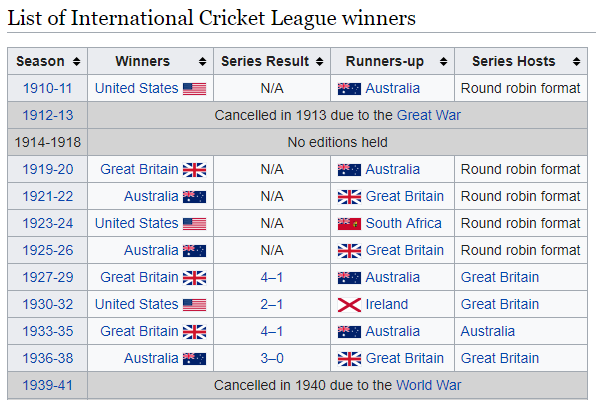 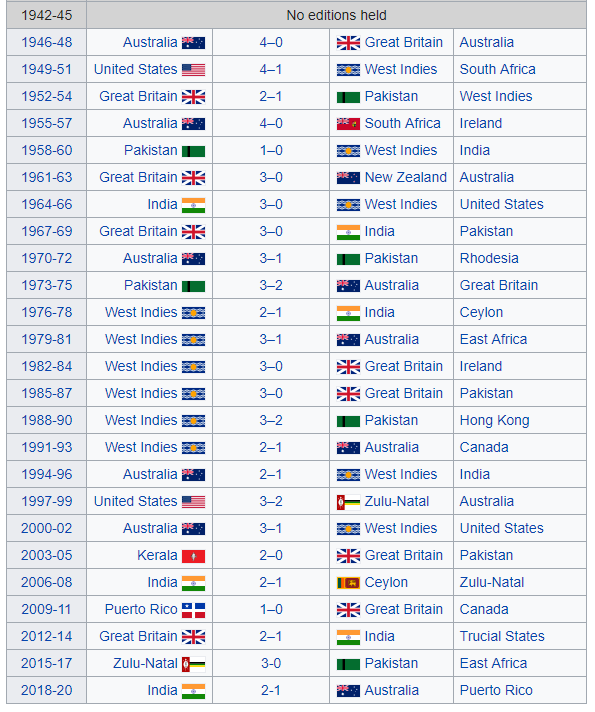 I think this may be the most British bit of the whole TL.

Cricket has conquered the States? Wow.

The first international cricket match IOTL was between the US and Canada.

I wouldn't necessarily say "conquered" but it's definitely more popular. Maybe think of it a bit like OTL soccer, in that it's (apologies for the tautology) popular where it's popular (in this case the northeast and Pennsylvania in particular) but it only really breaks out into the mainstream public consciousness on special occasions like when the US team is competing in a championship series.

OTL cricket was extremely popular in Philadelphia before the First World War until the English and Australian boards cut anyone not in the British Empire out of the touring schedule. TTL we butterfly that away and expand on it.
Last edited: Wednesday at 4:10 PM
Soccer: The Four Rs New

So, is Brazil a footballing superpower ITTL as well?

Analytical Engine said:
So, is Brazil a footballing superpower ITTL as well?
Click to expand...

Very much so. They've won the World Cup four times (I've not decided on a list of Copa America winners but they've won loads of that too) and are always one of the favourites going into every edition. They've not actually won it since 1982 but a lot of that is down to bad luck and the general vicissitudes of knock-out tournament play. Also, the fact that they won in 1982 means they never abandoned the "jogo bonito" style and didn't randomly decide that they needed a bunch of aggressive cloggers in midfield (fuck you, Dunga) rather than creativity.

Also, because Brazil is a legit near-superpower TTL (it's been a permanent member of the Security Council since the 1970s) and is generally much more stable and rich, the Brasileirao is a lot more prestigious than OTL (think something like the relative level of the Dutch or Portuguese leagues OTL) and players tend to play there for a lot longer.

So neither Romario nor Ronaldinho played in Barcelona. Booh on you, sir.

Kurt_Steiner said:
So neither Romario nor Ronaldinho played in Barcelona. Booh on you, sir.
Click to expand...

I have plans for Barca, don't worry...

I've got a bit of free time at work today so might post an infobox explaining all.

Rattigan said:
I have plans for Barca, don't worry...

Kurt_Steiner said:
Good ones, I hope...
Click to expand...

I'm afraid this is going to be totally derailed and become a sport thread for a few weeks.
Soccer: The Iberian League New

The Iberian League is the top level of the Catalan, Portuguese and Spanish football league system. Contested by 20 clubs, it operates on a system of promotion and relegation with the Catalan, Portuguese and Spanish leagues. Seasons run from September to May with each team playing 38 matches (playing all other teams both home and away). The League has featured six Portuguese clubs, three Catalan clubs and forty Spanish clubs and been won by two clubs from each federation, making it a cross-border league.

The competition was formed in May 1992 following the decision of clubs in Catalonia, Portugal and Spain to merge their top flights in order to take advantage of the improved competition and media rights opportunities. Since the first competition in 1992-93, forty-nine clubs have competed over 28 seasons. Six clubs have won the title since then: Barcelona (9), Benfica (6), Porto (5), Real Madrid (4), Espanyol (3) and Athletic Bilbao (1).

In the first years of its existence, the league was dominated by Barcelona, who won six of the first nine seasons, including a domestic and continental Treble in the 1999-00 season. During this time, the Barcelona team was dominated by a number of non-Catalan players who graduated through the ‘La Masia’ academy. The most notable of these players, nicknamed “Terry’s Tots” after long-serving manager Terry Venables, were the Benelux winger Marc Overmars, Spanish utility player David Albelda and the Portuguese players Abel Xavier, Luis Figo, Rui Costa and Paulo Sousa.

Following Johan Cruijff’s appointment as Benfica manager in 1997, they built a team which successfully competed with Barcelona, culminating in their own continental Treble in 2003-04, after which Cruijff resigned. The league would subsequently be contested by an increasing number of teams, including Porto, Real Madrid and Espanyol. Barcelona, however, would remain consistent competitors until Venables’ retirement in 2013, after which the club has entered into a prolonged slump. 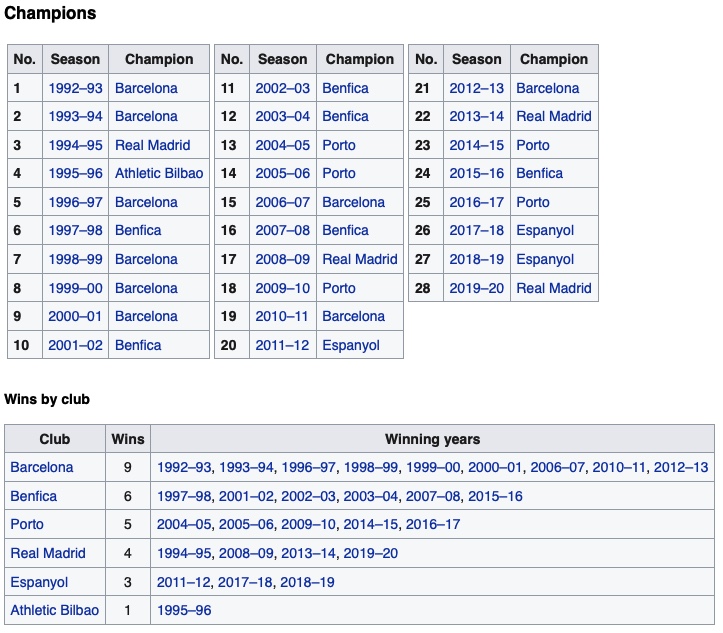 I'm glad to see that Terry Venables had a longer and more successful time here in Barcelona. Having Overmars in the team also makes my day. With Shearer or/and Owen it would have been just perfect.

Kurt_Steiner said:
I'm glad to see that Terry Venables had a longer and more successful time here in Barcelona. Having Overmars in the team also makes my day. With Shearer or/and Owen it would have been just perfect.
Click to expand...

No Shearer or Owen at the Camp Nou, I’m afraid. You’ll have to make do with Ronaldo and Rivaldo instead...
Last edited: Yesterday at 3:32 PM

Rattigan said:
No Shearer or Owen at the Camp Nou, I’m afraid. You’ll have to make do with Ronaldo and Rivaldo instead, I’m afraid...
Click to expand...

Rivaldo... Yes... Ronaldo... well...
Threadmarks
You must log in or register to reply here.
Top
Top