As some of you might know, for the past year I have worked on a narrative TL with POD being the assassination of Queen Victoria in 1872. I've linked to the original TL at the bottom. Basically it was an attempt to think through how the class compromises and conditions for Scandinavian social democracy could take root in Britain and branched off from there. I, at least, thought it was rather good and over time I became rather attached to the world and had plenty of half-baked ideas for things which were, realistically, never going to make it into a narrative TL.

This expanded TL is an attempt to find a home for those little things and fill out the world as a whole. If you have an idea for something in this world then please feel free to PM me and we can work something out but I'm afraid I reserve final veto over anything that becomes canon.

Last but not least, I should say that people shouldn't expect this to be anything like on the level that TLs like 'Hail Britannia' and 'Our Fair Commonwealth' have managed - I'll try but I don't think many people can be up to that.

NO LONGER CANON AND WILL BE REPLACED

First thing's first, below is a map of the world as at 31 December 2030. This is substantially the same as the world in 2019 but without the succession of Western Australia and West Canada and without the complete Balkanisation of Yugoslavia. Further details on these points can be found on my original TL.

Full credit for this map goes to @Analytical Engine who drew it for me. The full sized version is on his Deviant Art https://www.deviantart.com/analyticalengine/art/Anglo-Saxon-Social-Model-world-qbam-822643054 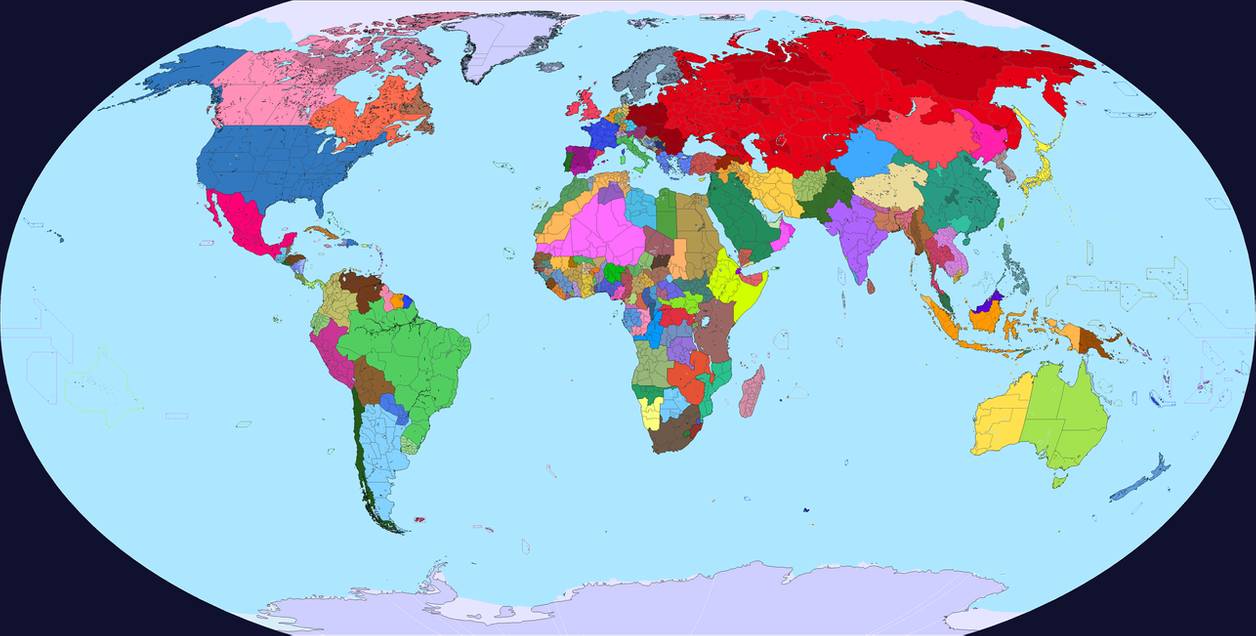 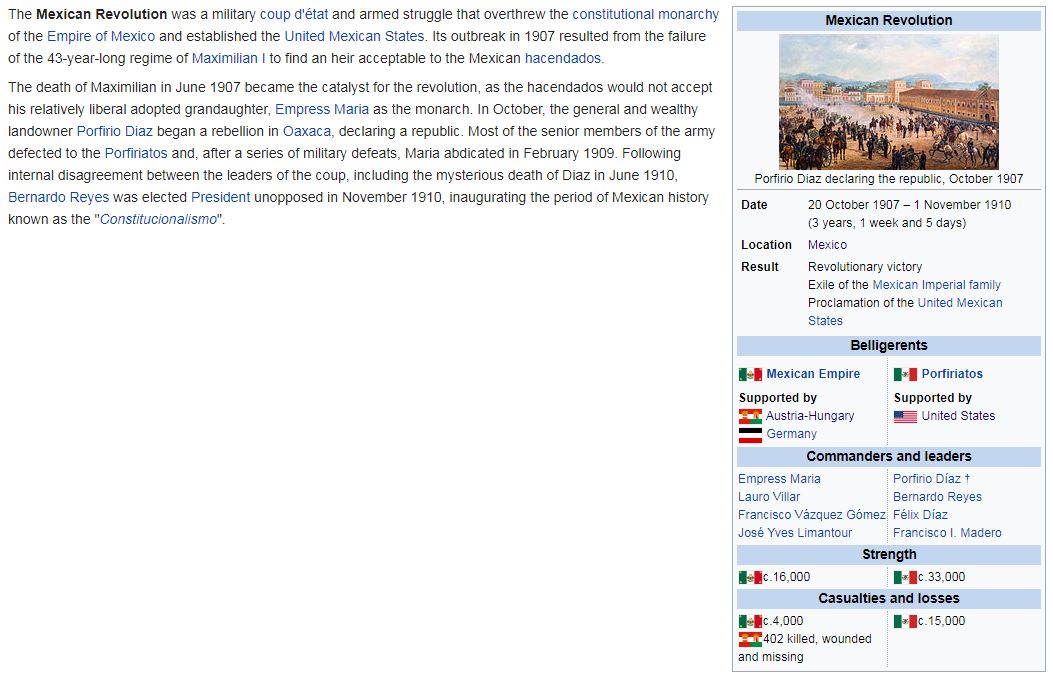 Hope you will cover the sinking of the Queen Mary and its aftermath in more detail here please!
Commonwealth: Member States, 2020

This is a list of Commonwealth Member States as of 31 December 2019. This differs from the world map above in that it doesn't include the secessionist states of West Canada and Westralia but is otherwise accurate: 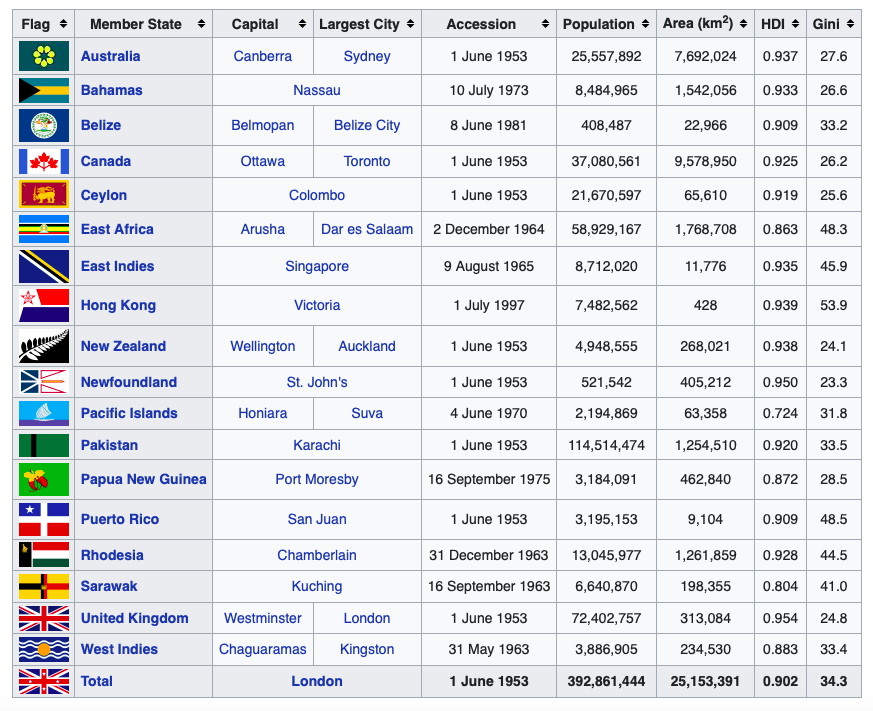 The header of the second column says "Province". This should probably be "Country".

UrbanNight said:
The header of the second column says "Province". This should probably be "Country".
Click to expand...

Damnit. An occupational hazard of using the Canadian Provinces infobox as a precedent. I'll change it when I get a moment

Rattigan said:
I'll change it when I get a moment
Click to expand...

No need to rush things. Your stuff is amazing and is only getting better with time.
United Kingdom: Devolved Assemblies 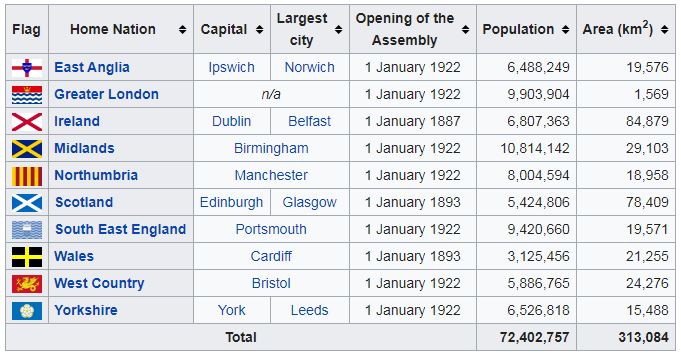 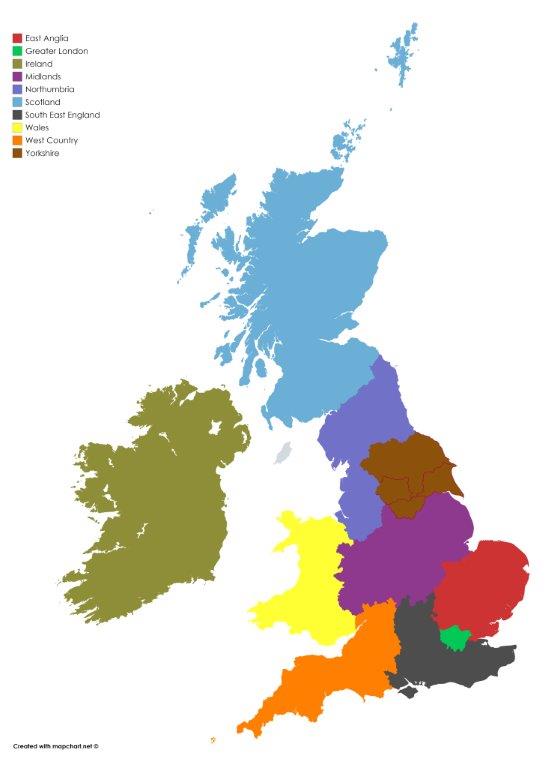 Wait? Is it Yorkshire split into North, South, West and East subregions? Sorry for my OCD, but this is interesting for me

Phradmon said:
Wait? Is it Yorkshire split into North, South, West and East subregions? Sorry for my OCD, but this is interesting for me
Click to expand...

The exact divisions of Yorkshire are a hangover from the base map I used to make it and wold ideally be invisible. So they don't necessarily reflect what local government is like TTL. Actual local government is divided largely along the traditional East, West and North Ridings, although larger cities (Leeds, Sheffield, Hull etc) have their own local government.

Scotland's current population is estimated at 5.438 million. IOTL, between 1840 and 1930 around 3 million Scots emigrated to England, the United States or the Commonwealth or 40-60% of Scotland's total population increase over this period. I can't find figures for emigration in the later 20th C but given that Scotland's population decreased in size by 150,000 from 1971 to 2001 I imagine it was a lot. Emigration from Scotland was largely a result of a lack of land reform before 1945, policies of harsh deindustrialization and a lack of investment in new Scottish industries thereafter.

Given that your timeline features less brutal deindustrialization in Scotland, progressive land reform very early on and home rule sooner than OTL, what is the reason for Scotland's population growth stagnating so much in your timeline?
Last edited: Dec 26, 2019

So the figures for population are as of 2019/20 (if you compare them with the population figure for the UK in the list of commonwealth member states in 2019 then you’ll see they match up). I can see that it might be confusing going forward because most of these updates will be “as of 2020” even though my original TL goes up to 2031 and I’ll try to be more clear about that in future.

No, it's basically the continuation of the OTL Straits Settlements (i.e. Singapore, Malacca and Penang). The other territories that form the 9 states/federal territories of OTL Peninsular Malaysia became a non-Commonwealth independent country in 1964 as the Federal Kingdom of Malaya.
Mexico: Constitucionalismo (1910-1930) 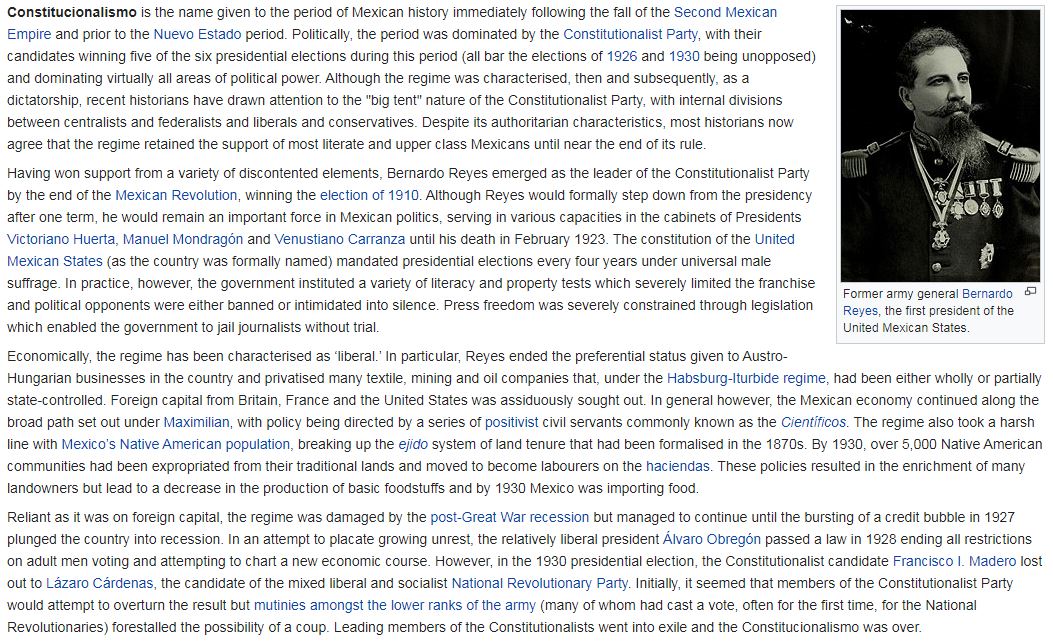 The FIFA World Cup, commonly known simply as the World Cup, is an international association football competition contested by senior men's national teams. The championship has been awarded every four years since the inaugural tournament in 1914, except in 1918 because of the Great War and in 1942 and 1946 because of the World War. The current champion is France, who won their first title at the 2018 tournament in Arabia. The current format involves a qualification phase, which takes place over the preceding three years, to determine which teams qualify for the tournament phase. In the tournament phase, 32 teams, including the automatically qualifying host nation, compete for the title at venues within the host nation over about a month.

The 24 World Cup tournaments have been won by fourteen national teams. The United Kingdom are the most successful team, having won five times and been runners-up a further six times. They are also one of only two nations, alongside Brazil, to have played in every tournament. (The amount of finals appearances made by the United Kingdom remains a subject of controversy, as their victories in 1926 and 1938 were by teams representing "Scotland" and "England" respectively and the United Kingdom national football team was not formed until 1962. However, when the United Kingdom won the 2014 tournament they were awarded the Daniel Burley Woolfall Trophy as an award for winning the competition 'five' times.) The other World Cup winners are Brazil, with four titles; inaugural winner Uruguay, with three titles; Portugal, with two titles; and Austria, Hungary, Yugoslavia, the Benelux, Argentina, the United States, Italy, the Commonwealth of Independent States, Spain and France, with one title each.

The first World Cup was announced in February 1913, to take place in 1914. However, because of the outbreak of the Great War only a few months later, the inaugural tournament was contested between only four South American nations (Argentina, Brazil, Chile and Uruguay) and the four "Home Nations" (England, Ireland, Scotland and Wales). The 1918 tournament would be cancelled because of Britain's entry into the Great War (thus spurring the creation of the Copa America that summer) but this 1914 format would be repeated for the 1922 and 1926 editions before being expanded to include four invited European countries in the 1930 tournament. From the 1950 tournament onward, the World Cup expanded to include nations from North America, Africa and Asia, with the number of teams reaching its current size of 32 teams at the 1990 tournament.

17 countries have hosted the World Cup. The United Kingdom has hosted three times, while Uruguay, France, Brazil, Argentina and the United States have each hosted twice. Italy, Switzerland, the Soviet Union, Bavaria, Mexico, China, East Africa, Japan, Spain, West Africa and Arabia have each hosted once. Colombia will host the 2022 tournament and Greece will host in 2026. 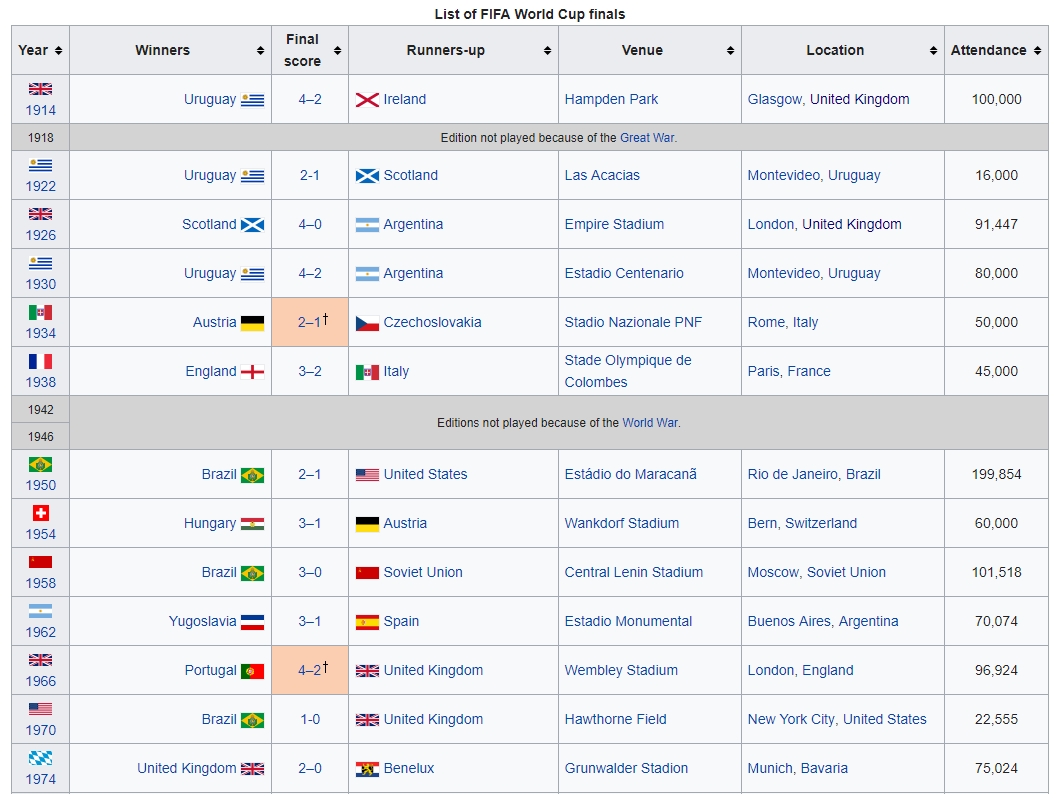 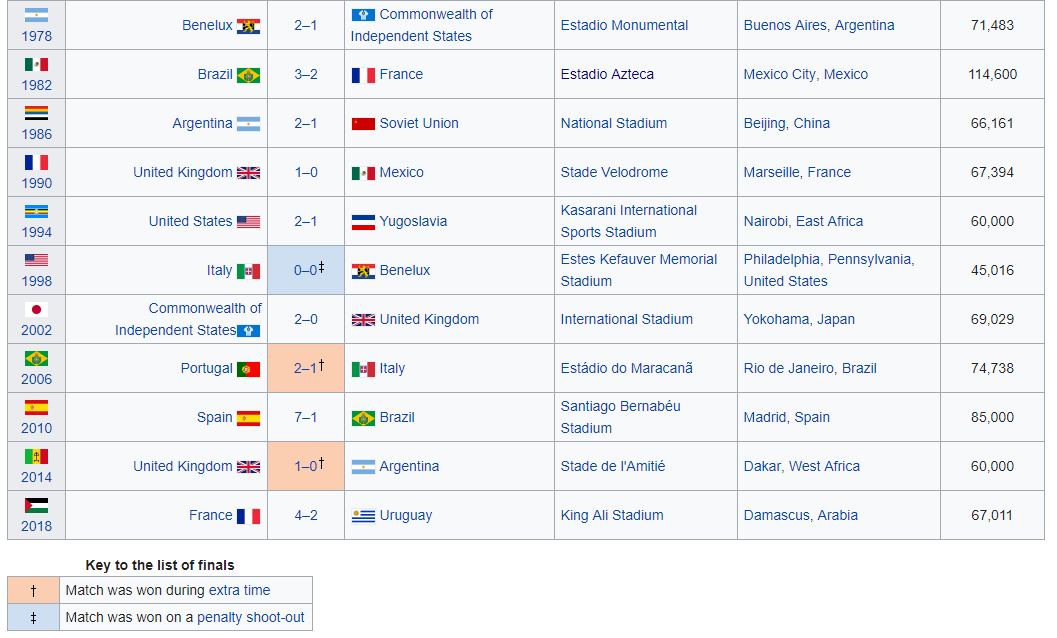