The alternate US of the Great Nebraska Sea.

So the Great Nebraska Sea is a 1963 SF short story by Alan Danzig taking place circa 1973 where a massive earthquake leads to the creation of a giant interior sea in the middle of the United States. The story ends with a glimpse of the future that can be seen to touch on not just alternate history but also alternate geography and alternate climate ail in the same package. I think it would be interesting to flesh out more specifics that we might see in such a new US related to all of those topics,


The following is the frame of reference ----


" It was in such a cataclysmic birth that the now peaceful Nebraska Sea came to America. Today,nearly one-hundred years after the unprecedented-and happily unrepeated disaster ,it is hard to remember the terror and despair of those weeks in October and November 1973. It is inconceivable to think of the United States without its beautiful and economically essential curve of interior ocean. Two-thirds as long as the Mediterranean, it graduates from the warm waters of the Gulf of Mexico through the equally blue waves of the Mississippi Bight, becoming cooler and greener north and west of the pleasant fishing isles of the Ozark Archipelago finally shading into the gray-green chop of the Gulf of Dakota.
What would the United States have become without the 5,600 mile coastline of our inland sea? It is only within the last twenty years that any but the topmost layer of water has cleared sufficiently to permit a really extensive fishing industry. Mud still held in suspension by the restless waves will not precipitate fully even in our lifetimes. Even so, the commercial fisheries of Missouri and Wyoming contribute no small part to the nation's economy.
Who can imagine what the Middle West must have been like before the amelioration of climate brought about by the proximity of a warm sea? The now temperate state of Minnesota( to say nothing of the submerged Dakotas) must have been Siberian. From contemporary accounts Missouri ,our second California, was unbelievably muggy, almost uninhabitable during the summer months. Our climate today, from Ohio and North Carolina to the rich fields of New Mexico and the orchards of Montana ,is directly ameliorated by the marine heart of the continent.
Who today could imagine the United States without the majestic sea cliffs in stately parade from New Mexico to Montana. The beaches of Wyoming, the America Riviera , where fruit trees grow almost to the water's edge? Or incredible Colorado, where the morning skier is the afternoon bather,thanks to the monorail connecting the highest peaks with the glistening white beaches?
Of course there have been losses to balance slightly these strong gains. The Mississippi was ,before 1973,one of the great rivers of the world. Taken together with its main tributary, the Missouri ,it vied favorably with such giant systems as the Amazon and the Ganges, now , ending as it does at Memphis and drawing its water chiefly from the Appalachian mountains, is only a slight remnant of what it was. And thought the Nebraska Sea today carries many times the tonnage of shipping in its ceaseless traffic, we have lost the old romance of river shipping. We may only guess what it was like when we look upon the Ohio and the truncated Mississippi.
And transcontinental shipping is somewhat more difficult, with trucks and the freight railroads obliged to take the sea ferries across the Nebraska Sea .We shall never know what the United States was like with its numerous coast-to-coast highways always busy with trucks and private cars. Still, the ferry ride is certainly a welcome break after days of driving, and for those who wish a glimpse of what it must have been like, there is always the Cross-Canada Throughway and the magnificent U.S Highway 73 looping north through Minnesota and passing through the giant port of Alexis, North Dakota, shipping center for the wheat of Manitoba and crossroad of a nation.
The political situation has long been a thorny problem.Only tattered remnants of the eight submerged states remained after the flood,but none of them wanted to surrender its autonomy.The tiny fringe of Kansas semmed,for a time,ready to merge with contiguous Missouri,but following the lead of the Arkansas Forever faction,the remaining population decided to retain political integrity. This has resulted in the continuing anomaly of the seven "fringe states" represented in Congress by the usual two senators each,though the largest of them is barley the size of Connecticut and all are economically indistingushable from their neighboring states.
Fortuantely it was decided some years ago that Oklahoma,the only one of the eight to have completely disappeared,could not in any sense be considered to have a continuing ploitical existence.So,though there are still families who proudly call themselves Oklahomans,and the Oklahoma Oil company continues to pump oil from its submerged real estate,the state has in fact disappeared from the American political scene.
But this is by now no more than a petty annoyance,to raise a smile when the talk gets around to the question of States' rights. Not even the tremendous price the country paid for its new sea-fourteen million dead,untold property destroyed-really offsets the asset we enjoy today. The heart of the continent,now open to the shipping of the world,was once dry and landlocked,cut off from the bustle of trade and the ferment of world culture.
It would indeed seem odd to an American of the '50's or 60's of the last century to imagine sailors from the merchant fleets of every nation walking the streets of Denver,fresh ashore at Newport ,only fifteen miles away.Or to imagine Lincoln,Fargo,Kansas City and Dallas as world ports and great manufacturing centers. Utterly beyond their ken would be Roswell,New Mexico,Benton,Wyoming,Westport ,Missouri and the other new ports of over a million inhabitants each which have developed on the new harbors of the inland sea.
Unimaginable too would have been the general growth of population in states surrounding the new sea.As the water tables rose and manufacturing and trade moved in to take advantage of the just-created axis of world communication,a population explosion was touched off of which we are only now seeing the diminution.This new westering is to be ranked with the first surge of pioneers which created the American west.But what a difference! Vacation paradises bloom,a new fishing industry thrives,her water road is America's main artery of trade,a fleets of all the world sail...where once the prairie schooner made its laborious and dusty way west "
Last edited: Feb 1, 2020

So could anyone do a regional map that shows the cities, towns and geographic features listed here at the end of the short story ?

Here’s a geographic map of it from a previous thread. 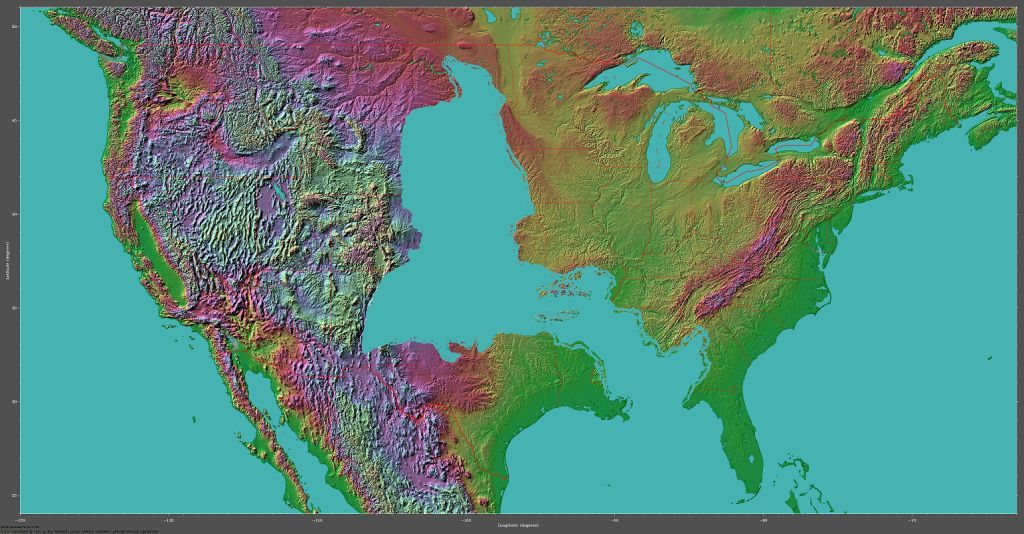 (And the previous thread)

This is a short story (info posted here http://en.wikipedia.org/wiki/The_Great_Nebraska_Sea) that has some alternate/future history implications. I found the whole story is actually posted in this thread https://www.alternatehistory.com/discussion/showthread.php?t=64000 . Any ideas about what...
www.alternatehistory.com

frustrated progressive said:
Here’s a geographic map of it from a previous thread.
View attachment 520399

(And the previous thread)

This is a short story (info posted here http://en.wikipedia.org/wiki/The_Great_Nebraska_Sea) that has some alternate/future history implications. I found the whole story is actually posted in this thread https://www.alternatehistory.com/discussion/showthread.php?t=64000 . Any ideas about what...
www.alternatehistory.com
Click to expand...

Wow that looks pretty different. Wonder what the new climate is like there ? Also to orient ourselves Denver and Kansas City are port cities or nearly port cities on either side of the map's center ?
Last edited: Feb 1, 2020

The big difference is in colonialisation, the west would not be colonized via inland(canoe) trek but via sea boats. Although you land right in the rockies, not exactly prime real estate. Spanish holdings in Texas are pretty secure, Canada's road toward the west can be easily cut by a colony south of Manitoba, the ''Ohio country'' could be colonized independantly from Canada or East Coast 13 colonies, etc.

Undeadmuffin said:
The big difference is in colonialisation, the west would not be colonized via inland(canoe) trek but via sea boats. Although you land right in the rockies, not exactly prime real estate. Spanish holdings in Texas are pretty secure, Canada's road toward the west can be easily cut by a colony south of Manitoba, the ''Ohio country'' could be colonized independantly from Canada or East Coast 13 colonies, etc.
Click to expand... 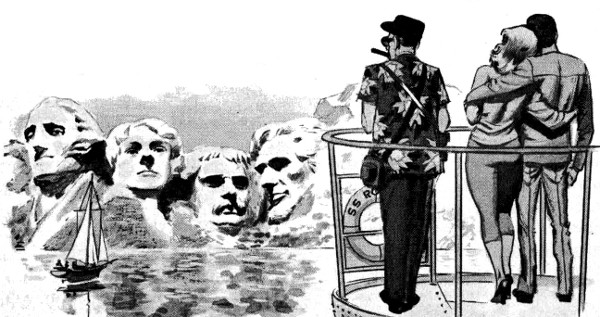 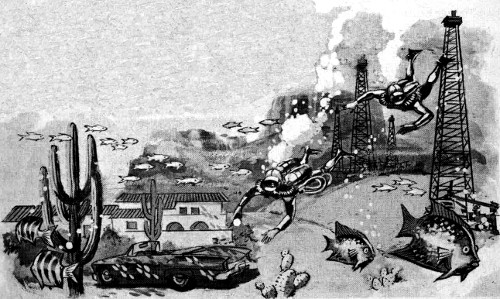 So I guess all the extra water makes for a much milder climate across much of the arid West and southwestern US ? Do things get more lush and fertile in the remaining farmland in the mid West ? With potential forms of farming, fishing and floushing flora and fauna the coast and near shore of the Great Nebraska sea develops into a real jewel by 2100-what else on Earth can compete ?

So any thoughts about the effect this has on the effects of climate change ? Are things worse ,better or about the same worldwide? Is America still in the energy production business considering many of the submerged areas have large natural gas and petroleum deposits ?

Donor
I think B munro made a map looking at the future of this world if you're interested.

Stretch said:
I think B munro made a map looking at the future of this world if you're interested.
Click to expand...

Yes and here is the link

and like everything he does its very well done but its just that it doesn't focus on the Sea itself that much and Im looking for more about that....
Last edited: Mar 23, 2020

So would you want to live near the sea ?

What would be some of the costal cities ITTL?

terranova210486 said:
What would be some of the costal cities ITTL?
Click to expand...

The story mentions Denver but there is the actual new port city of Newport, Colorado which is 15 miles from Denver but presumably right on the coast . The story also mentions Lincoln, Nebraska, Fargo, North Dakota, Kansas City ,Missouri and Dallas Texas. The story also mentions Alexis N orth Dakota, Roswell, New Mexico, Benton ,Wyoming and Westport ,Missouri {new city ?) along with the other unnamed new port cities of over a million inhabitants each, So we can speculate by this description that the Great Nebraska Sea costal area is one of the most densely populated regions in the US and the world. We need to know more about it...

BTW the Ozarks have been transformed into an island chain which would also be interesting to look at-talk about a new environment...
Last edited: Mar 11, 2021

So Earth lost a breadbasket but gained an inland sea- is the "trade" successful ?

What would be the most romantic cities on the Nebraska Sea?

terranova210486 said:
What would be the most romantic cities on the Nebraska Sea?
Click to expand...

We could use a map that shows the locations both the old and new cities and the new geographic features along the Nebraska Sea coastline...