Technical Study: US Defense of Kuwait Against The Soviet Army

Inspired by this thread discussing how a Japanese Area Army would have defended Normandy against the Allies, I'll throw out a different proposition: What would a US led Allied defense of Kuwait and Southern Iraq have looked like when tasked against the cream of the Soviet Army in 1991 (let's say the quality is equivalent to the Group of Soviet Forces in Germany circa 1988)?

There's obviously a massive qualitative difference between a US led Allied Army versus the Iraqi Army circa 1991. On the whole, they're better equipped, better trained, better disciplined, have better command and control, and not led by a moron of a strategist. Therefore, defenses are likely to be much better constructed, local field commanders are more likely to show flexibility and initiative, and there's less likely to be a glaring hole on their flank as their was in Western Iraq, forcing an attack into the teeth of their defenses.

On the Central Front in Germany, NATO opted for the strategy of forward defense against the Red Army, largely for political reasons. Whether this would have actually been the best strategy for defeating the Warsaw Pact rather than a battleplan that emphasized defense in depth is still up for debate. That said, from Kuwait City to Khafji is a mere 128km-ish so there's not so much depth to be had; though a slight improvement over Germany where the Red Army could take a golf shot across the border and hit Hamburg with it.

On the other side the Soviet Army on the offensive is probably not quite as technologically capable as the Allied Coalition, but the gap is nowhere near as wide as it was during Desert Storm in 1991. A Soviet Category A division is a leap over the elite Republican Guard divisions and light years ahead of a regular Iraqi division; perhaps the biggest of all gaps is that whatever the Soviets bring as far as an air defense network is likely to make life significantly more miserable than the Iraqis managed against Chuck Horner's troops in 1991.

With that said, will the Red Army stick with it's doctrine which emphasized the concept of using Operational Maneuver Groups to rapidly exploit any minor breakthrough and charge as far as they can, or will they opt for a different strategy given the more wide open terrain of the desert and lower concentration of forces involved?

politicalnomad said:
With that said, will the Red Army stick with it's doctrine which emphasized the concept of using Operational Maneuver Groups to rapidly exploit any minor breakthrough and charge as far as they can, or will they opt for a different strategy given the more wide open terrain of the desert and lower concentration of forces involved?
Click to expand...

The key part of such battle is the aerial element, and both sides have certainly studied the lessons of recent Arab-Israeli wars in great detail: http://www.tacticaloperationscenter.com/Air Defense.htm

The Soviet attacks would only operate under a strong AA umbrella, and that would set the pace of operations from their part. With 2K22M/2S6M Tunguska, Strela-10 with MIM-72G missiles, 9K33M3 "Osa-AKM", 9K330 Tor, 9K37M1 Buk-M1 and most importantly S-300V, the Soviet AA system can cover the entire operational area in depth, and saturate the frontline with close-range weapon systems. These weapons and their Western countermeasures have never been tested against one another in detail, but they certainly wouldn't enable the USAF a near-free reign it had in OTL. 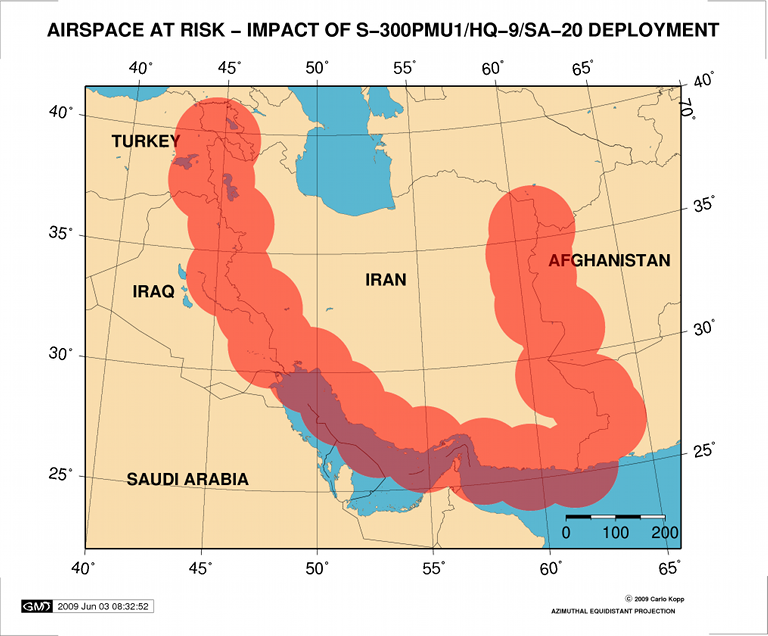 And unlike the Iraqi AF, the VVS will certainly seek to support their ground formations against Coalition air attacks. With MiG-23MLAs and MiG-29.12s supported by a handful of MiG-29 9.13S, their weapon system lacks anything similar to AMRAAM. But as the image above shows, they can operate within the safety of their own AA network.

The battlefield will be deep with other weapon systems as well. Soviet long-range conventional weapon systems include OTR-23 Oka launchers and RSZO 9K58 "Smerch" that can reach anything in the whole theater of operations and especially within Kuwait itself, and on SIGINT and EW capabilities the Soviets were the only power with any chances to seriously challenge the US military in this field.

So I'd expect a rather empty battlefield from both sides, with spread-out forces and utilization of long-range, firepower-intensive weapon systems. The Soviet doctrine calls for long-range infiltration and recon operations in depth of the enemy defenses to identify targets for their strong artillery arm and long-range weapon systems - preventing this would in turn form a key part of any successful Coalition defense.

From a similar discussion on another forum by a former NCO in military-intelligence:

The Coalition didn't manage to destroy Iraqi command and control, so expecting them to do so against a Soviet army (which had become quite paranoid about NATO's potential to do this) is unrealistic. Iraqi logistics took a beating, but that's because the Iraqis were incapable of defending their lines of communication (they couldn't disperse their air defense assets and still have them function), and left their army strung out all over the desert - in itself a logistical challenge, never mind when one is under air attack.

Soviet doctrine was highly offensive minded, and ideally the Soviets would want to pre-empt the NATO forces by attacking first. However, by December of 1990 sufficient Coalition forces are on the ground to make this very difficult, and the Soviet troops were hardly at their greatest state of readiness, and would need a crash program to get themselves into combat shape. It does however give them enough time to change defensive deployments to better suit their much more mobile army, likely pulling back most forces from the border for a maneuver defense in depth. This reduces their exposure to air attack, and also reduces the logistics load. It also goes without saying that Soviet air defense will be orders of magnitude more effective than Iraqi, not just in quality of equipment, but most importantly quality of skill.

It's not just that the Coalition will take much higher losses. It's that now there is actually the potential for a serious battlefield reverse. The odds still favour an ultimate Coalition victory, but this is not nearly so one sided. The Soviets will take any opportunity offered to outright annihilate portions of the Coalition forces with counter attacks, and will have the mobility and firepower to pull it off if the Coalition isn't careful. The campaign will probably look very different from the one against Iraq, with the Coalition's best strategy being to implement a plodding, deliberate advance to minimize the threat of any Soviet fancy maneuvers, minimize casualties (which will be high) and maximize their own raw power. The Coalition may not even be able to keep up the month+ aerial bombardment as historical if aircraft losses are high enough, and the Soviets continue to dig in and retrain (also note that Soviet ballistic missiles will be far more lethal, and Coalition airbases will be under continual attack from rockets and special forces, and even the occasional penetration air raid - so it won't be all one way).

It may actually be better for Schwarzkopf to kick the ground war off sooner rather than later, gain maximum force against Kuwait, then dig in and ward off any Soviet counter attacks before calling it a day. His BEST odds in fact are to launch the war immediately after the Soviets arrive, before they have a chance to re-organize, but that may be politically impossible given the timelines of SCR 678, and because the initial Soviet redeployment may for a moment look like a withdrawal.

We're thinking in the mode of an enemy doomed to defeat, with the only successes they can claim being how many of us they take with them before the inevitable. This is a dangerous trap. This is a fight against a peer level opponent, with all that entails. Including the potential for actual honest-to-goodness defeat.
Click to expand...

Anyway, doctrinally, the most likely Soviet deployment would be a prepared defence around Kuwait City with a large security zone stretching to the Saudi border. The old Iraqi forward positions would be excellent fodder for decoys and run up positions for the security force - small mobile armoured groupings intended to harass the enemy as they advance, slow them, waste their power, and channel their movement. Because there are few defensive features of note west of Kuwait City, the Soviets would look to a mobile defence anchored on their left to the City, rather than any attempt to string a continuous line of fortifications across the desert.

Given their understanding of warfare, the Soviets might plan to delay and draw the right wing of the Coalition forces into a bloody fight for Kuwait City, while holding the bulk of their armoured forces in reserve north of Basra. When the Coalition left wing advanced, their defense lines in the desert west of Kuwait would withdraw towards Um Qasr, and the Soviets would then attempt to flank the advancing Coalition forces in turn from Basra. Ideally (for them) this would result in a massive series of meeting engagements, but with the Coalition left wing now caught between Kuwait City to the south, the withdrawing motor rifle troops to the east, and the advancing armoured forces to the north. With the Coalition right wing bogged down around Kuwait City, this would be the kind of grand kill zone the Soviets always liked.

The Coalition counter to this would be to isolate Kuwait City, but keep any movements by the left wing of the army conservative, and be prepared to go over to the defensive and just shred incoming Soviet counter attacks with raw firepower once they materialized. Or they could toss the dice and accept any invitation to a massive free wheeling melee north and north west of Kuwait City, which they would certainly have a chance to win, but would be gambling perhaps more than would be wise.
Click to expand...

ObssesedNuker said:
From a similar discussion on another forum by a former NCO in military-intelligence:
Click to expand...

Can you point me to that please? I'd be interested in reading it.
You must log in or register to reply here.
Top
Top