hey, all. while working on a map for my ASB ATL recently, i decided it would be easier to differentiate the Balkan states with their own colors rather than using the same Serbian dark blue (because they're supposed to be in an economic union with one another). that itself is beside the point, though: i realized that the Balkan color palette for my old TACOS project was seriously lacking, and from there that the whole color scheme retrospectively left alot to be desired.

therefore, i thought i'd open up discussion as to how the old TACOS Color Scheme can be further improved. for reference, a link to the color scheme is in my signature.

what i decided to do first is figure out what OTL countries are covered by the current version of TACOS and made a loose map to go with it. the map itself is still largely a WIP, but i've covered all of the entries in the current version of TACOS (and left out Other/Unimportant white to keep things simple, subdivisions aren't included, and only colors specifically assigned to OTL countries are used; for example, Confederate butternut and Soviet red aren't on the map). i've attached the map to show where the OTL colors belong and therefore where they will probably be located in a given ATL. i've preemptively decided that Myanmar needs a new color since its identical to the Chad color.


so here's the main point of this: first and foremost, what's needed is colors for the uncolored states, like Tanzania, Laos, Honduras, Bosnia, Paraguay, and any of the Pacific island states (such as Fiji; those ones will probably be covered last). the next big thing to do (though we can start with this immediately as well) is to figure out which current TACOS colors are too similar to other ones and, on an OTL map, would be too close to another state to be easily distinguished (one that comes to mind is Algeria and France, both of which have very similar blues). lastly, these would need to be sorted into appropriate palettes and decisions need to be made as to what else they could be used for (such as the current example of Iroquois blue being alternatively used for an independent New York)

does anyone have any ideas? 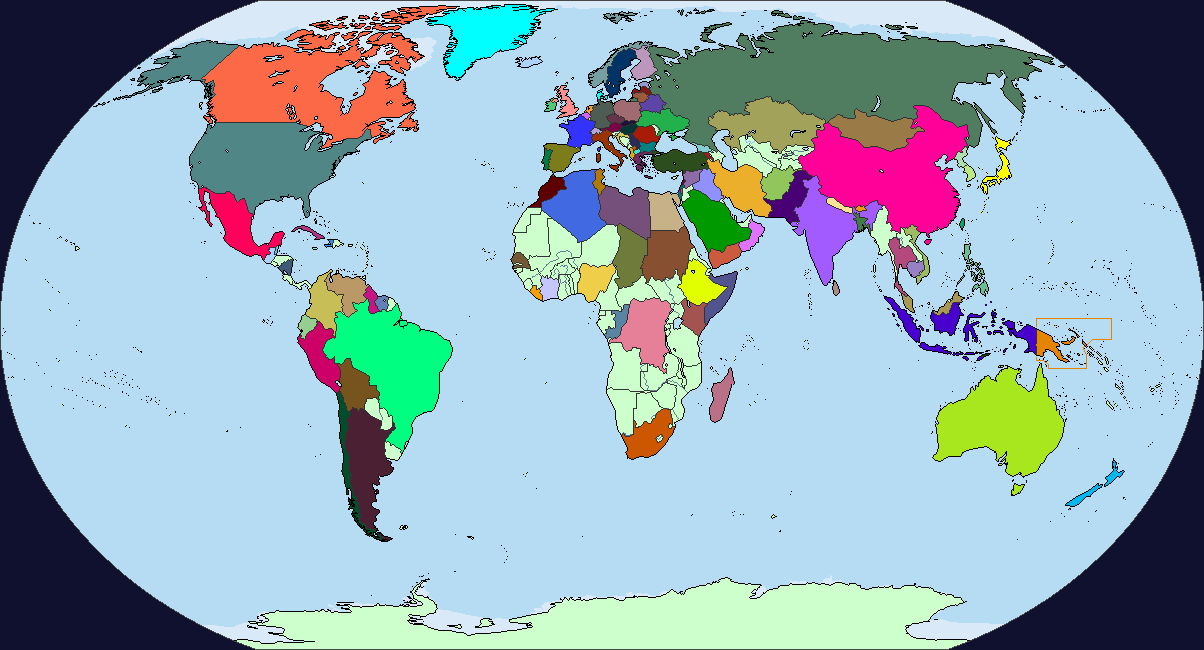 First, I suggest using white for uncolored nations, that is important.

I admittingly use the scheme on occasions.

We don`t need any more colours for minor nations, because you can`t stop when you start.

white is, and always will be; i just didn't include it on the map for simplicity's sake

TurkishCapybara said:
We don`t need any more colours for minor nations, because you can`t stop when you start.

part of an idea i had was that (using Pacific states for this example) some of those colors could very well be used for other states as well, depending on their history. for example, different formerly German parts of the Pacific could be specified as having colors from other German states. at the moment, its going on just OTL states

though right now we should be focusing on the major continental states that don't have colors
Last edited: Oct 2, 2012

i compiled a list of just about everything that's missing. however, i've divided the list into two parts based on general importance:


thats 77 to add in altogether (there may be some accidental overlap in the list), though a number of them can be encompassed along with other entries or made applicable to ancient countries as well; in particular, i plan to pair Kuwait together with the Sumeria (since Sumeria was the southernmost of the ancient Mesopotamian civilizations, even though they actually lived in Iraq) and Malta with Unified Crusader States (one of the entries from the current version of TACOS) because some crusader groups were specifically based in Malta, and it allows me to repurpose an existing color instead of making up a new one


and again, some of the "less-important" entries can borrow entries from historical OTL states (San Marino, for instance, could have a current historical Italian color instead of its own unique one; the same would go for Andorra and Monaco)

Banned
The colors for Libya, Syria, and Greece are hard to differentiate IMO.

i think Syria's is distinct enough (i cant remember if that was a UCS color or not) but i see libya's, too. though that purple is pretty distinct, it could probably do with re-placing. i'm actually a little partial to that color because it was one of those that i used really early on when i first started making maps (back then i used it for Spain)

perhaps it would go well as the color for Western Sahara? thoughts?

Banned
Liberia and the Netherlands are annoying similar, this is usually OK, but in colonial-era maps, especially when others don't know TACOS is being used, it can be irritating.

This is TACOS we're talking about. It was basically founded on the principle to keep white off the map

Abhakhazia said:
This is TACOS we're talking about. It was basically founded on the principle to keep white off the map
Click to expand...

more to give options for everything the idea with Other/Unimportant white is for countries which aren't important to the TL, like (in all likelihood) the Central African Republic in a surviving USSR TL, or an independent Kazakhstan in a take-off of TL-191

but this is why i decided to open up discussion again looking back, Liberian and Dutch orange is very similar. any ideas for what could be used instead for Liberia? Dutch orange stays no matter what

EDIT: also, i need to correct myself on the earlier list: i thought the Gaza Strip was considered separate from the West Bank/Palestine, but i was wrong on that. so don't bother looking for a color for Gaza; there's already a color for Palestine
Last edited: Oct 2, 2012

Banned
You did pick a very pretty shade of blue for Somalia, though.

thank you speaking of Africa, i've decided that i'll be trying to divide Sub-Saharan Africa into two new palettes: West Africa and East Africa respectively, and have adjusted North Africa to include only the African parts of the Arab League. here's those palettes as they stand right now (for entries; i haven't devised any new colors)


keep in mind, though, that some of these will eventually fall under other categories (Ivory Coast, for instance, will probably go to the French palette like before)

Alternatehistory.com ; The only place on the internet where slightly different variations of green start flame wars.

an idea just occurred to me concerning the earlier mention of Swiss/Other white. in addition to repurposing old colors and adding some new ones, instead of going overboard like i had originally intended is to only include new entries that have specific entries from established TLs here on AH.com. so, for example, a specific color won't be added for Paraguay, for instance, unless there's a specific TL about it. any OTL countries that aren't in the color scheme that are of significant power (according to wikipedia ) will be added in with any potential recolorings, but i'll go back and cut out any countries that don't have specific TLs for them

so, if anyone knows of any particular TLs that focus on (relatively) obscure countries, please post a link so that i cant get some context; itll also be useful to know exactly what those countries did in those TLs, and could allow us to repurpose some colors from the older versions that originally went to the ASB palettes. i'll be looking into notable examples from my own WIP TLs, myself to try to get some other ideas

Lascupa also reminded me that Future8 added in several colors of his own to the original TACOS that i myself never made a solid decision on. here's a link to that version: https://www.alternatehistory.com/discussion/attachment.php?attachmentid=184301&stc=1&d=1346597037
You must log in or register to reply here.
Top
Share:
Share
Top