perfectgeneral said:
An early limit on the six pounder was the machine tools available to make the barrels were limited to L43.
Click to expand...

On the 26th of March Admiral Cunningham in Alexandria had been fully informed about the planned Italian fleet sortie via decrypts from Bletchley. The RN ensured that an aircraft 'Found' the Italian fleet the next day to hide the intelligence source. The details were not released for decades.

I know we often talk here about the path the British tanks will take here in this wonderful TL (or bring up a certain penis gun shoud bedecked tank....) but here me out here...what if. 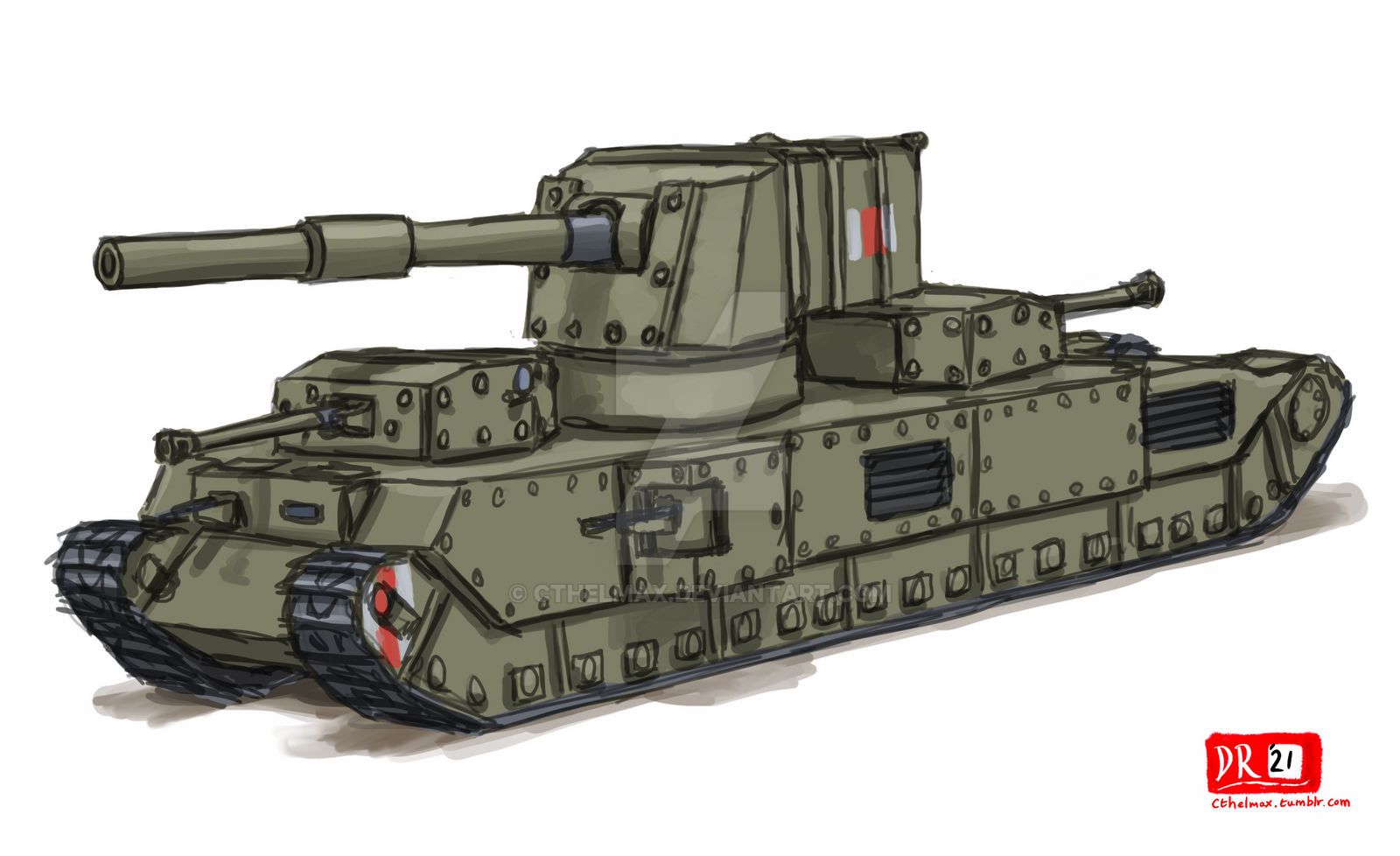 I mean what could go wrong...

steamboy said:
I know we often talk here about the path the British tanks will take here in this wonderful TL (or bring up a certain penis gun shoud bedecked tank....) but here me out here...what if.

I mean what could go wrong...
Click to expand...

Well something's got to match the KV-6! steamboy said:
Well something's got to match the KV-6!

steamboy said:
Well something's got to match the KV-6!

With which the Germans answered: 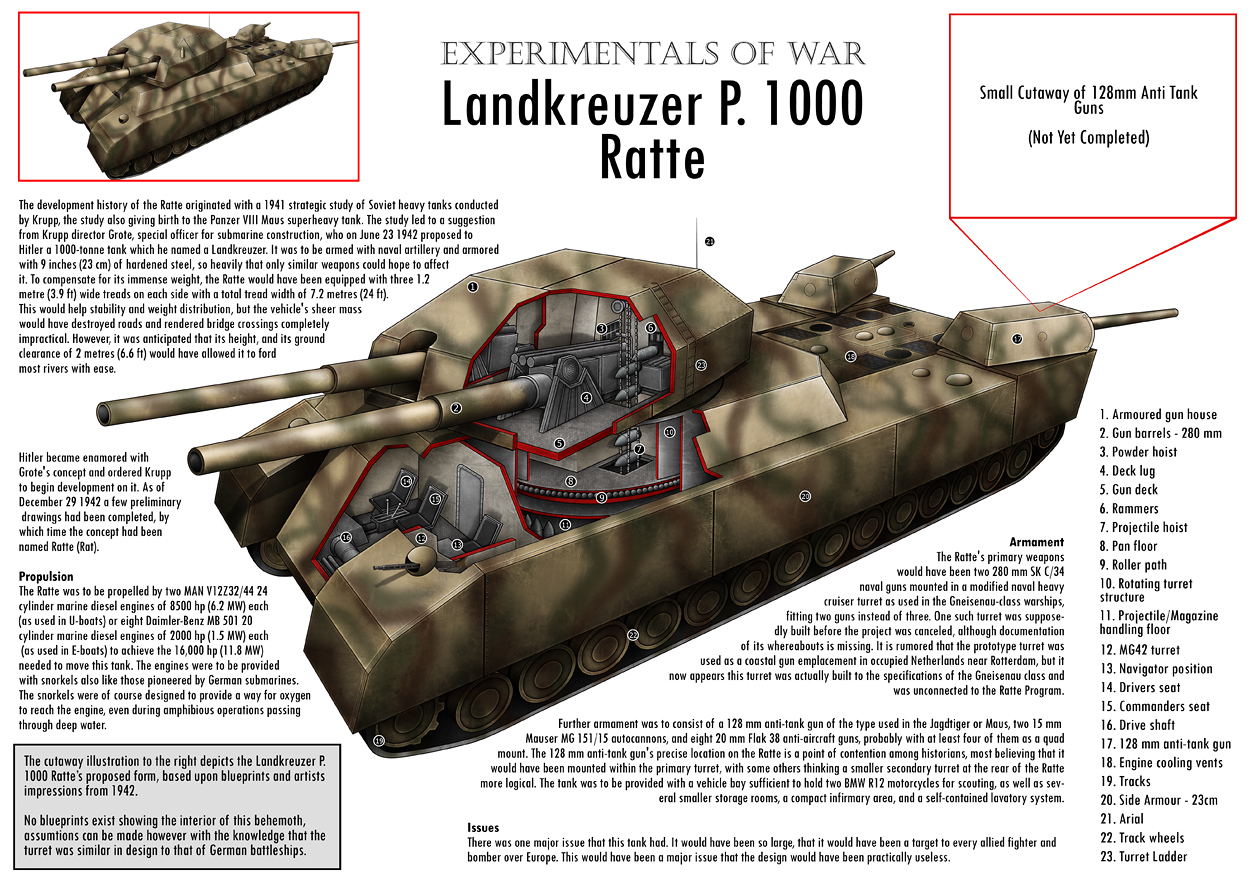 (Sorry, for some reason you need to open the image in a new tag to see it)

Just caught up with the timeline! Trully excellent work!

A couple of comments regarding the butterflies on the Greek Campaign so far:

- The Tempi Tunnel has been demolished. It makes sense that the railroad bridges in the Tempi are demolished as well. The only railroad that transverses the country in the north-south axis is now not usable to the Germans. It certainly adds more logistical challenges to them.

- Piraeus is intact in TTL and can be used for the evacuation. It is one of the biggest ports in the Mediterranean with good infrastructure.

- In TTL the 1st AB is not prematurely recalled by Wilson. Therefore, the greek XII and ΧΧ divisions can retreat in time and establish themselves in the Askio - Vourinos line according to the plan. At the very least, the Cavalry Division with the attached 21st Brigade can reach the location as well. Depending on how the fighting retreat is managed, more units of the West Macedonia Army Section can retreat in time as well.

What does that mean? The Cretans of the V Division are rushing south as fast as non-motorized army can march. I believe they will get enough time to get into western Greece ports. The rest of the Epirus Army Section will have to perform a fighting retreat and its vast majority will be lost in any case.

The Allies can fight a succesful delaying action in the Pindus-Olympus line, especially if they have a significant part of the WMAS in their OOB. Terrain there is extremely good for defence. The non-motorized greek units can be sacrificed to cover the retreat of Wilson's Corps and the Cavalry Division. I would guess that a greek unit can retreat via the railroad to Thermopylae. Perhaps the 21st Brigade? @Lascaris what do you think?

Then the fight will take place in Thermopylae. The defensive location consists of a narrow coastal plain 3-4km in width anchored by mountains. The Germans will fight while the single railroad behind them is cut off.

All these actions buy precious time. In OTL there were 11,500 Greeks in Crete. Of them, 900 were Gendarmerie cadets, 300 officer cadets with their officers, 100 local reservists and 1600 gendarmes and ~7500 green recruits. The rest were the remains of the XII and XX divisions. Now, Lascaris informs us that the Class of 1941 consisted of 40,000 recruits training in southern Greece. Now all of them can be sent, not just the 7500. Additionally, we may see the hardened veterans of the V Cretan Division to defend their homes. The civilian Cretans fought as lions during the german occupation. I would really like to see what their veteran division can do in home soil. The men of the veteran Cavalry division can be added as well along with bits and bites from other veteran units.

Any extra time and no Clan Fraser explosion means that the personnel of the Greek Air Force around Athens can evacuate to Crete. Pilots, gunners, base personnel, technicians from the KEA aircraft factory. Likewise the base personnel of the Greek Navy have time to retreat as well. All the specialists that keep an air force or a navy fighting can now find their way to Crete. The same applies to the army engineers that were behind the frontline.

Intact Piraeus also means that at least part of the Commonwealth's heavy equipment can be evacuated as well along with the british AA batteries in Attica.
Last edited: Jun 2, 2021

steamboy said:
I know we often talk here about the path the British tanks will take here in this wonderful TL (or bring up a certain penis gun shoud bedecked tank....) but here me out here...what if.

I mean what could go wrong...
Click to expand...

The Japanese actually beat you all with the I-GO tank: 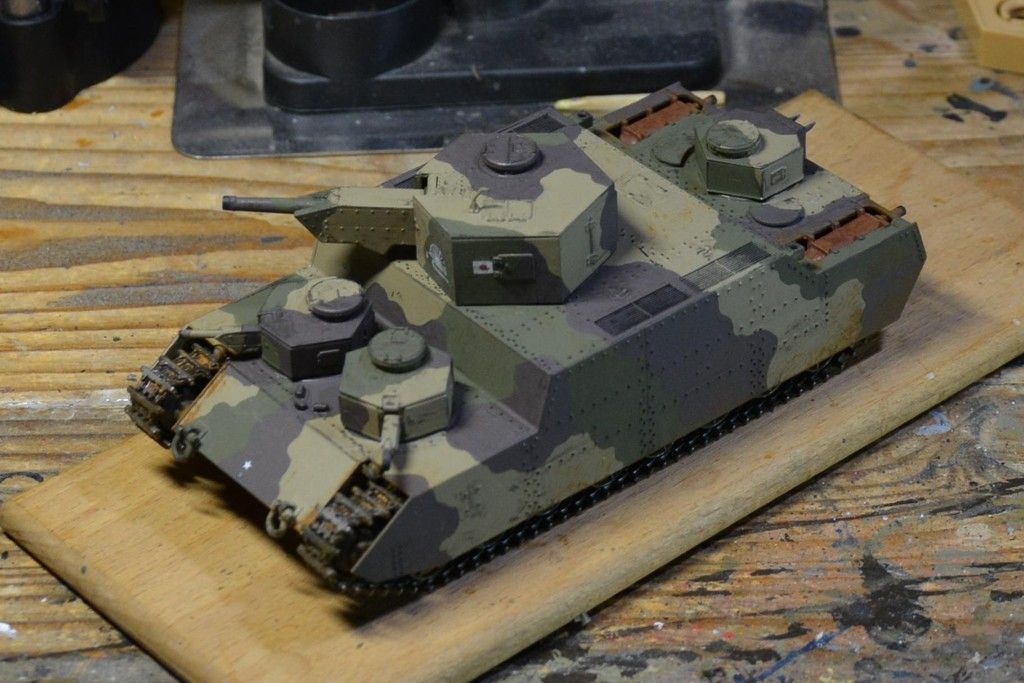 They actually built and tested a prototype.
Last edited: Jun 2, 2021

I raise your bid with the mighty Soviet T-35, 5 turrets and 61 built 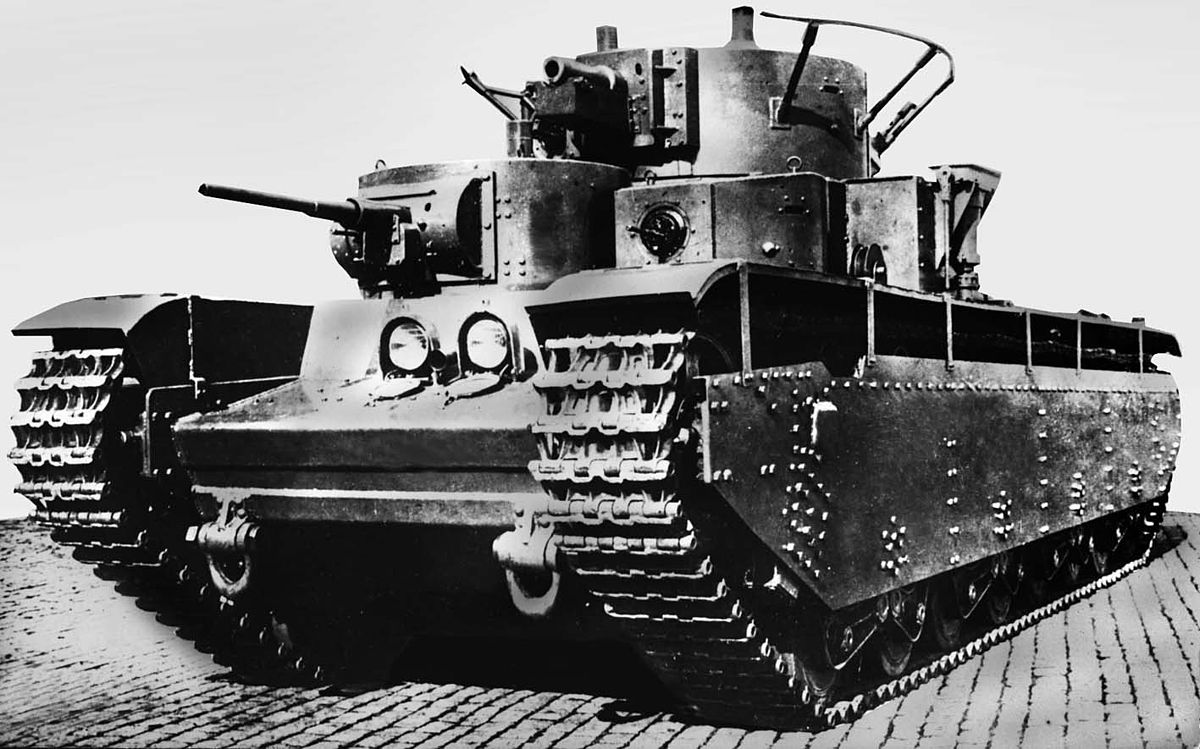 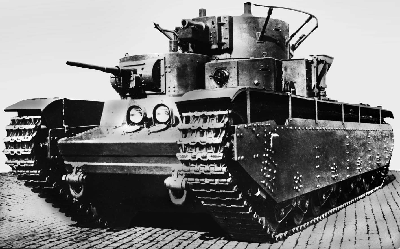 pjmidd said:
I raise your bid with the mighty Soviet T-35, 5 turrets and 61 built 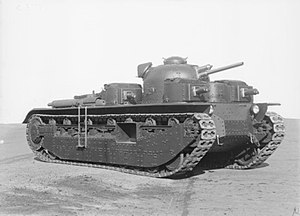 Vickers did it first!

And quickly realised it was a stupid idea that couldn't work.

It's very fitting that it's sitting on a cutting board.

I initially thought it was a very good themed cake.

No, no, no! That's the Yu-Go tank! The I-Go tank suffered from constipation and never actually went...

TonyA said:
No, no, no! That's the Yu-Go tank! The I-Go tank suffered from constipation and never actually went...
Click to expand...

General Papagos’ Headquarters was in an uproar when General Wilson arrived. In some ways he noted this seemed to be the normal state of affairs, as Wilson’s opinion of the Greek temperament being somewhat scathing. Once in the inner sanctum the Greek General showed Wilson the current situation regarding the pull back of the Greek army from Albania.

Generally, things were going to plan. The Greek forces had disengaged from the Italians and were mostly falling back in good order, but only at walking pace, with the Italians giving chase in some places. Communications were patchy and Papagos’ HQ was in turmoil due to trying to make sense of what was going on. The three crucial passes held by the Greek Cavalry, 2oth and 12th Divisions were all under heavy pressure, but holding. The weather had been clearing up, so the Luftwaffe were much more evident, something that Wilson was very aware of. Wilson noted the help that British Empire forces had been giving to these three Greek Divisions, which Papagos appreciated as well.

Wilson asked about the rumours of a defeatist attitude that was being widely talked about. Papagos shrugged his shoulders. The Greeks had fought the Italians to a standstill and pushed them right back into Albania. Now they were being stabbed in the back by the Germans, and frankly the Greek army was incapable of reversing this setback. Wilson could see the strain that Papagos was under, so when the Greek General asked him for an update, Wilson laid out the current situation.

The 2nd New Zealand Division had been hard pressed all along their front. It was only the demolition of the Platamon tunnel and road that had prevented them from being having their flank turned. The 6th Australian Division, had also been attacked strongly, but had managed, so far, at considerable cost, to hold the Germans back. The German Mountain Divisions were proving to be formidable opponents. The First Armoured Brigade had fallen back behind the Aliakmon River line. Their losses had been serious, but they were still a potent force.

Wilson explained that he was worried about his left flank. If the Germans broke through the passes, there was a real danger of them cutting off the retreating Western Macedonian and Epirius Armies before they could get into a defensible line. He informed Papagos that he sent 17th Australian Brigade to Grevena to shore up that flank, just in case the Germans broke through before the main Greek forces were able to withdraw. He then outlined the plan to fall back towards a shorter line at Thermopylae. The Australians and New Zealanders would fall back in leaps and bounds, with the Armoured Brigade covering them. The Quartermasters and RASC were working hard at re-organising stores to prevent as much as possible from falling into the hands of the Germans, or indeed simply being destroyed in place. The timetable had been worked out with Generals Blamey and Freyberg, and it could be put into effect almost immediately.

Papagos felt that this was a reasonable plan for the British, but knew that there would be no way for his footsore soldiers could make it back as far the positions Wilson was planning before the Germans arrived. Papagos at this point suggested as things may become critical in the future, Wilson should plan to re-embark British troops and ‘save Greece from devastation’. Wilson was taken aback. While that eventuality had always been in the minds of the planners of Operation Lustre, to hear it from the Greek commander was shocking. The defeatist attitude that Wilson had asked about seemed to start from the top. This was something that he would need to consult Wavell about, it would probably also need to be reported to London. The question that Wilson knew he’d be asked was whether this was just the Greek Commander-in-Chief’s opinion, or that of the Greek Government. Papagos admitted he hadn’t consulted anyone, but, at the very least, the British might start planning for the eventuality. Wilson agreed to pass on the suggestion, knowing full well that planning was already well underway.

In the meantime, the current situation was likely to be maintained for at least another day, allowing more of the two Greek armies to make progress towards their new positions. If the Australians and New Zealanders could hold their positions until starting to withdraw on 18 April, then the Greeks could use the cover of the Pindos mountains to continue to pull back. Wilson agreed, but noted that a great deal of his transport would be needed to move as much of the main supply dump at Larissa back towards Athens. He also noted that falling back to the south of Greece would mean the RAF and remaining Greek Air Force would need to move, which would mean they wouldn’t be in a position to cover the withdrawal. German command of the air would be something the Greeks and Imperial forces would have to learn to live with.

Donor
Nearly all of this is as OTL, including the quote from Papagos (taken from Diary of a Disaster, which in turn takes it from the Greek government, 1981 Foreign Office materials published in a white paper known in Greece, 1940-1941.) The main difference is that the Germans are still about a day behind their OTL schedule.

Well if there's a delay, that's all for the better.
Threadmarks
Reader mode
You must log in or register to reply here.
Top
Share:
Share
Top