SS-GB was written by Len Deighton and published in 1978. It is a classic work of Alternate History, set in a world where Nazi Germany invaded Great Britain in 1940. 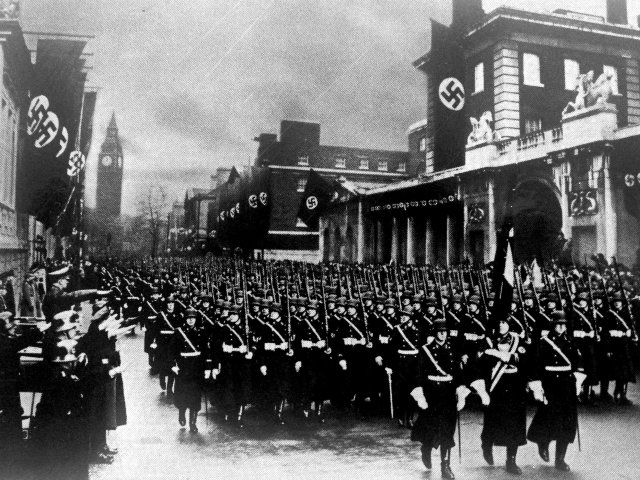 Logline
In a Britain occupied by Nazi Germany, a British detective investigates the murder of a nuclear physicist. He must unravel the complex plots of his German superiors and the British resistance, in order to survive and transfer the secret of the atom bomb to Britain’s last hope – the USA.

Plot Overview
It is November 1941, nine months after a successful German invasion of Britain. Douglas Archer, a British policeman, is now working under a German superior, Gruppenführer Kellerman of the SS. As a homicide detective, Archer avoids involvement in political crime.

Archer is called to a murder scene in Mayfair, where he meets an American reporter Barbara Braga who is looking for a camera film. He also finds the joint from an artificial arm. Oskar Huth, of the Nazi intelligence service the Sicherheitsdienst (SD), arrives to supervise the murder investigation. The murdered man was an atomic physicist involved with the resistance, and the murder was something to do with information he had about nuclear physics.

Archer meets George Mayhew, of the British resistance, who is planning to rescue the king from the Tower of London and smuggle him to the USA to act as a figurehead. He also becomes romantically involved with Barbara Braga.

As Archer continues to investigate, the plots of the SS, German Army and British resistance become increasingly byzantine, as everyone searches for the the missing nuclear research. Archer can't trust anyone, including the British resistance, and must decide how much to risk to try and help his country.

(Note, to avoid spoilers, this plot summary is truncated, the whole plot is summarised in my full SS-GB Book Review.)


Analysis
SS-GB is largely a translation of one of Deighton’s cold war spy novels to a different setting and shows all the strengths and weaknesses of his other spy novels. The quality of the writing is generally high (although see the section on point of view below). Deighton shows a frighteningly plausible alternate Britain, rapidly caving in to Nazi tyranny.

SS-GB as Alternate History
Like Fatherland by Robert Harris , SS-GB uses the alternate world as a setting and makes no real attempt to create a coherent alternative history. No point of departure that enabled the German army to get across the English Channel is mentioned, and the progress of the German invasion of Britain is barely explained.

However, Archer meets various characters who fill in some of the story of the invasion and Britain’s surrender. So, although the big picture is clear, the details of the invasion are left unspecified.

Unlike most ‘Nazi victory’ novels, which tend to be set decades or even centuries after the war, SS-GB is set less than a year after Britain’s surrender. How the country has become quite so settled under German occupation in such a short period is never explained.

The following events are specifically mentioned:
1940
1941

Realism
Deighton creates an incredibly realistic world, downbeat, gray and dull, similar to his ‘Harry Palmer’ novels in its complexity and cynicism. There are no real heroes in the story: Archer is a collaborator, mostly just trying to survive, although he tries to help the resistance where he can. Huth is power-mad and amoral but charming. Kellerman, despite his bumbling facade, is just as ruthless and even more devious. Both SS factions and the German Army spend more time fighting amongst themselves than fighting the resistance, with which they are all collaborating to various extents. Mayhew is a chessmaster playing a difficult game and willing to sacrifice everything and everyone, even his own king, to achieve his goal of starting a war between the USA and Germany in the hope that the USA will eventually liberate Britain from the Nazis.

Like several of Len Deighton’s other books, the plot of SS-GB is byzantine and parts of it are unresolved. Who was the man who attacked Archer on the tube? Who killed the other policeman? Who planted the bomb at the Highgate cemetery? Why are there so many factions within the German forces? The plot is at times unnecessarily obtuse; Archer, and the reader, have no real idea what is going on until the end, when paradoxically the novel swings into exposition mode and spells it all out.

False Documents
False documents are included in a novel to make it seem more authentic and realistic. This is particularly useful when the story is obviously not true, as in an alternate history novel like SS-GB . Len Deighton opens SS-GB with the supposed surrender document of the British armed forces in the United Kingdom. Note that it’s a military surrender of the forces in Great Britain itself, not a political treaty ending the war. This is important in terms of the story, where Great Britain is militarily occupied by Germany. The British Empire remains at war with Germany and the story hints at the fact that there is still armed resistance, particularly in Scotland and the north. 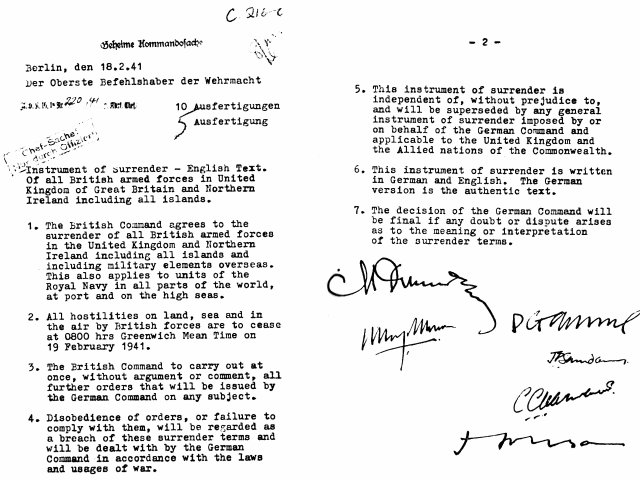 The original hardback edition of SS-GB also included two false documents on the dust jacket: a British stamp featuring Hitler’s head and a 1941 postmark, and a photograph of Hitler taking the salute as his troops march down Whitehall. Remember this was produced in 1978, well before Photoshop made photo manipulation of this sort relatively simple.

Point of View
Deighton shows us almost all of the story of SS-GB through the eyes of Archer, but he uses an omniscient point of view, which is occasionally jarring. Surprisingly, given his ability to indicate emotions using subtext, there are lines that just bluntly tell the reader how other characters are feeling. Further, although the focus is almost entirely on Archer, there are a couple of jarring jumps to other points of view, such as towards the end when we suddenly get a single chapter from the point of view of the US Marines.

SS-GB: My Verdict
Like all of Deighton’s novels, SS-GB is a convoluted and downbeat story with no heroes and no easy answers, but Deighton’s skill keeps the reader engrossed and creates an entirely believable world. It is one of the key novels of Alternate History, and a must read for all alternate history fans.

More details, including a complete plot summary and artwork are at my full SS-GB Book Review
Last edited: Dec 9, 2013

I read it when it first came out: as Shimbo points out, the plot is byzantine, revealed (when it is at all) obliquely, and the book is downbeat and "realist".

Note that Deighton's XPD revolves around another (but secret) 1940 AH POD.

I read it when it first came out: as Shimbo points out, the plot is byzantine, revealed (when it is at all) obliquely, and the book is downbeat and "realist".

Note that Deighton's XPD revolves around another (but secret) 1940 AH POD.
Click to expand...

XPD is on my list to review, but isn't it 'secret history', not 'alternate history'.

Shimbo
XPD is on my list to review, but isn't it 'secret history', not 'alternate history'.
Click to expand...

I loved SS-GB, a classic of its type

Best Regards
Grey Wolf
You must log in or register to reply here.
Top
Top