Fatherland was written by Robert Harris and published in 1992. It is set in a world where Nazi Germany won the Second World War. 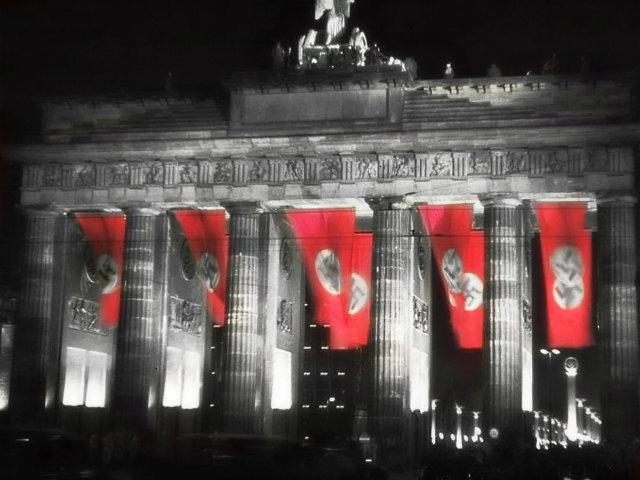 By 1964, Germany dominates the whole of Europe. However, Hitler is nearing his seventy-fifth birthday and has not been seen in public for months.

Germany is also embroiled in a long-running, unwinnable guerrilla war in Russia, against US-backed partisans and faces internal resistance. It hopes to end this ‘Cold War’ by staging a superpower summit, where Hitler will sign a co-operation agreement with US President Joseph Kennedy.

In this alternate world, the common understanding is that Europe’s Jews were ‘Resettled in the East’. Although this is recognised as unlikely by many, their true fate is unknown. The Nazis claim tales of massacres are ‘communist propaganda’.

Logline
In a world where Nazi Germany won the Second World War, a German policeman investigates a conspiracy involving the deaths of high-ranking Nazis and must decide how much he is prepared to sacrifice in order to discover the darkest secrets of the victorious Third Reich.

Xavier March, an ex-Kreigsmarine U-boat captain, is now a detective in Berlin. He is in the Kripo, the German criminal police, not the more famous Gestapo, who deal with ‘political crime’.

Working late, March answers a colleague’s telephone and is called to the recovery of a body found in the Havel river.

The next day, March visits his ten-year-old son, Pili. March is separated from his wife, and Pili lives with his mother. To his father’s disappointment, Pili has become a fanatical junior Hitler Youth.

The corpse is identified as Josef Buhler, a high-ranking Nazi. March goes to Buhler’s house. On the way, he learns the Gestapo has claimed jurisdiction over the case and he has been ordered to cease his investigation. Despite this, he continues and discovers Buhler’s diary, a suspicious envelope and evidence that suggests Buhler was murdered. A Gestapo Obergruppenführer, Odilo Globocnik, known as ‘Globus’, arrives. March senses danger and sneaks away without being seen.

The envelope March took from Buhler’s house contains a box of chocolates posted from Switzerland. The diary has a few cryptic markings and one reference to ‘Stuckart/Luther’, other high-ranking Nazis. March discovers Stuckart is also dead and Luther is missing.

March interviews ’Charlie’ Maguire, the 25-year-old American woman who discovered Stuckart’s body. March takes her to Stuckart’s apartment where they crack his safe and discover the keys to a safe deposit box in Switzerland. The Gestapo arrive and arrest March, although Charlie escapes.

The next day, Globus takes March to Buhler’s house and shows him a cellar full of looted art works. He claims Buhler, Stuckart and Luther were using their positions to loot European art works and had come under investigation. Obviously, he says, Buhler and Stuckart committed suicide and Luther went on the run to avoid capture and disgrace. March disagrees believing the evidence points to murder and to Globus himself as the perpetrator.

March’s boss, Artur Nebe the head of the Kripo, orders March to continue his investigation and gives him four days to make a case against Globus. Nebe appears to believe that the evidence may be useful as a political weapon against his enemies in the Nazi administration.

March and Charlie travel to Zürich to investigate the safety-deposit box. There is nothing in it except another painting, but March suspects that Luther must have recently removed incriminating papers. Returning to Berlin he looks in the archive for a clue to what the documents might be and discovers a connection...

NB. This plot summary is truncated to avoid major spoilers, for full plot summary see my review of Fatherland

Fatherland: Analysis
Fatherland was the novel that got me into alternative history, so it has a special place in my heart. (It wasn’t the first alternative history book I’d read though. I read SS-GB by Len Deighton when I was about twelve, although I didn’t really understand it.)

I’ve read all of Robert Harris’s books since and seen most of the films. Some are better than others, and I particularly like Archangel . But it’s Fatherland that’s the true classic.

The Alternative History of Fatherland
Fatherland is a great thriller, but it’s not great alternative history, technically. The problem is that Harris never explicitly states his point of departure.

(For an explanation of what a point of departure is see my article How to use Point of Departure in an Alternative History Novel).

He does include a passage in which victory over the USSR and Great Britain and peace with the USA are hand-waved as:

Unfortunately, this passage raises as many questions as it answers.
However, despite the lack of a clear point of departure, alternative history enthusiasts have attempted to make sense of the alternative history of Fatherland. Analysing the hints in the book, it seems the point of departure is Reinhard Heydrich surviving the 1941 assassination attempt that in reality led to his death.

Heydrich is frequently mentioned in Fatherland as head of the SS, although he is never seen. His survival is the earliest change to history mentioned in the book. How Heydrich surviving could lead to the other changes is difficult to see. Perhaps it could be because he was more competent than a lot of the other high-ranking Nazis.


Fatherland: My Verdict
One of the key alternate history novels. Anyone who is interested in alternative history should read this book.

More details, including analysis of Fatherland as a detective novel and a dystopian nightmare, an alternative book cover and an AH flag are available at my full review of Fatherland

I enjoyed it. Still think Children's War is a better surviving Nazi Germany.

Shimbo said:
(It wasn’t the first alternative history book I’d read though. I read SS-GB by Len Deighton when I was about twelve, although I didn’t really understand it.)
Click to expand...

Both Fatherland and SS-GB are similar, a reluctant German agent and an American journalist trying to unravel a vast conspiracy with various factions in their way. Both are great, though I'd say SS-GB is possibly the better book, despite being even more dystopian.

I'll have to have a look at that one, I've not read it.

Donor
Oh the Childrens War is a wonderful book. Very long though but worth it. There`s a sequal called A Change of Regime. And yes Fatherlans is one of the classic works of alternate history.

I agree that it is a great book and it was the one that really got me into AH too.

The Red said:
Both Fatherland and SS-GB are similar, a reluctant German agent and an American journalist trying to unravel a vast conspiracy with various factions in their way. Both are great, though I'd say SS-GB is possibly the better book, despite being even more dystopian.
Click to expand...

I agree SS-GB is better written, and it is a good book, but I found it less enjoyable than Fatherland even when I reread them both recently.

To me, the best bits in SS-GB are early on and the ending seems to me quite rushed and unsatisfying, whereas Fatherland builds to a great finale.

They do have structural similarities, because they're both in the same genre, Mystery. And IMO both are very strong on the ambiance of the alternative world but not so good on its backstory.


jerard said:
I agree that it is a great book and it was the one that really got me into AH too.
Click to expand...

It's amazing how many people, when I say I write Alternate History, reply "Oh, like Fatherland?" It's one of the few mainstream crossovers from the genre, although Dominion did very well last year too.
You must log in or register to reply here.
Top
Top