I mean, Plague, Inc. does include Belarus and Kaliningrad (East Prussia) in the Baltic States, so why not?

Also independent Polynesia, Afghan enclave on the coast of Pakistan, Indian enclave in the Irani-Afghan border, Moldova controls Bessarabia, Belize was eaten by Mexico, East Timor is united with West Timor, Greater Poland and China occupied Tonkin in Vietnam.
A peculiar Timeline to say the least. Wonder what happened to turn in this way.

Albidoom said:
And now for a map obviously meant for children (although tbh that's not really an excuse for a map to be bad)

I guess I'll only name a few:

First, it's a [edited] Mercator (while that projection does have its uses those ain't even needed on a childrens' map)

Second, much of the Antarctic extending as far north as Uruguay? Sounds legit.

Third, trees on Greenland (admittedly with enough global warming this could become true)

And I haven't even started on the borders. That I will leave to those willing enough to keep focusing on that map.


Though I do kinda appreciate that Pretzel as an icon for Germany.
Click to expand... 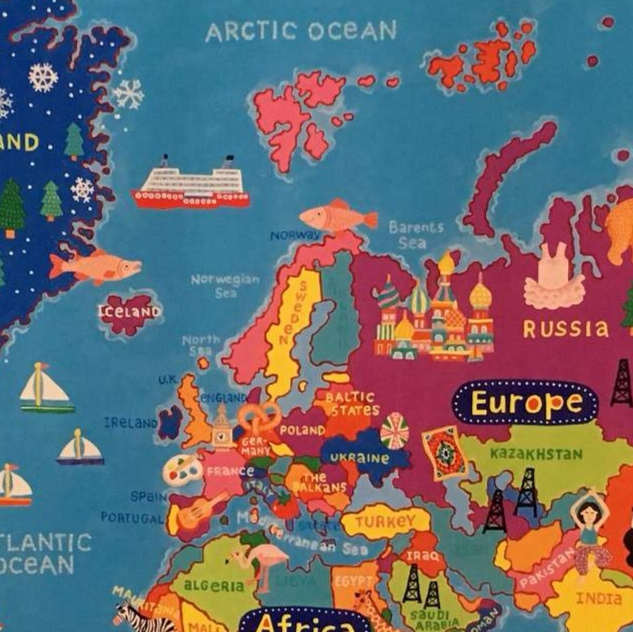 Let's first focus in this part. Iran controlling the Transcaucasus requires a PoD going all the way back to the early 19th century.

Poland controlling what appears to be most of Germany east of the Elbe and East Prussia... Doable if the USSR decides to i) remove the entire German population from their sector, or ii) create a Brandenburg Gate Crossing scenario where the Germans become a minority in their own land.

Alt-Slovakia and alt-Hungary/Croatia/Bosnia could only be formed either by a complete assimilation of Hungarians, or by a worse Trianon coupled with an aversion of Yugoslavia altogether.

Also, it appears that Franz Josef Land is Norwegian here. Have Norway instead of the USSR control it by 1926.

Alt-Macedonia controlling both Albania and the Western Thrace, as well as Bulgaria with Eastern Thrace can be the result of a more disastrous Balkan Wars.

Moldova as Bessarabia is easy. Let the USSR give them the Budjak instead of giving it to Ukraine, and done.

Independent Pakistani Balochistan can be the result of a different Partition of India.

That land between Iran and Afghanistan... Some sort of Iran-unfriendly buffer state?

Kyrgyzstan, Tajikistan, and Tashkent under one state can be the result of a different split of Central Asia.

Lebanon controlling the northern half of Israel, and a larger Transjordan is not impossible, but then which one would end up as the destination of the European Jewry?

The number of exclaves in that Indian subcontinent is absurd.

Poland apparently took over Denmark, and named it “England”. Greenland became Denmark in exile. Meanwhile, Ireland decided to unite. And Colombia is apparently not important enough to be named even though all its neighbors were.

Baconheimer said:
The number of exclaves in that Indian subcontinent is absurd.
Click to expand...

2 Exclaves is absurd. almost 200 enclaves including counter enclaves and a counter-counter enclave in the Indian Subcontinent for almost 60 years, that's fine...

They spelled Ecuador with a 'q'. *Internal screaming*

And a missing Alaska Southeast panhandle...

AlternateHistory191 said:
They spelled Ecuador with a 'q'. *Internal screaming*
Click to expand...

They’re all a bunch of ecuadorqs down there, anyway.

And now for a balloon globe: 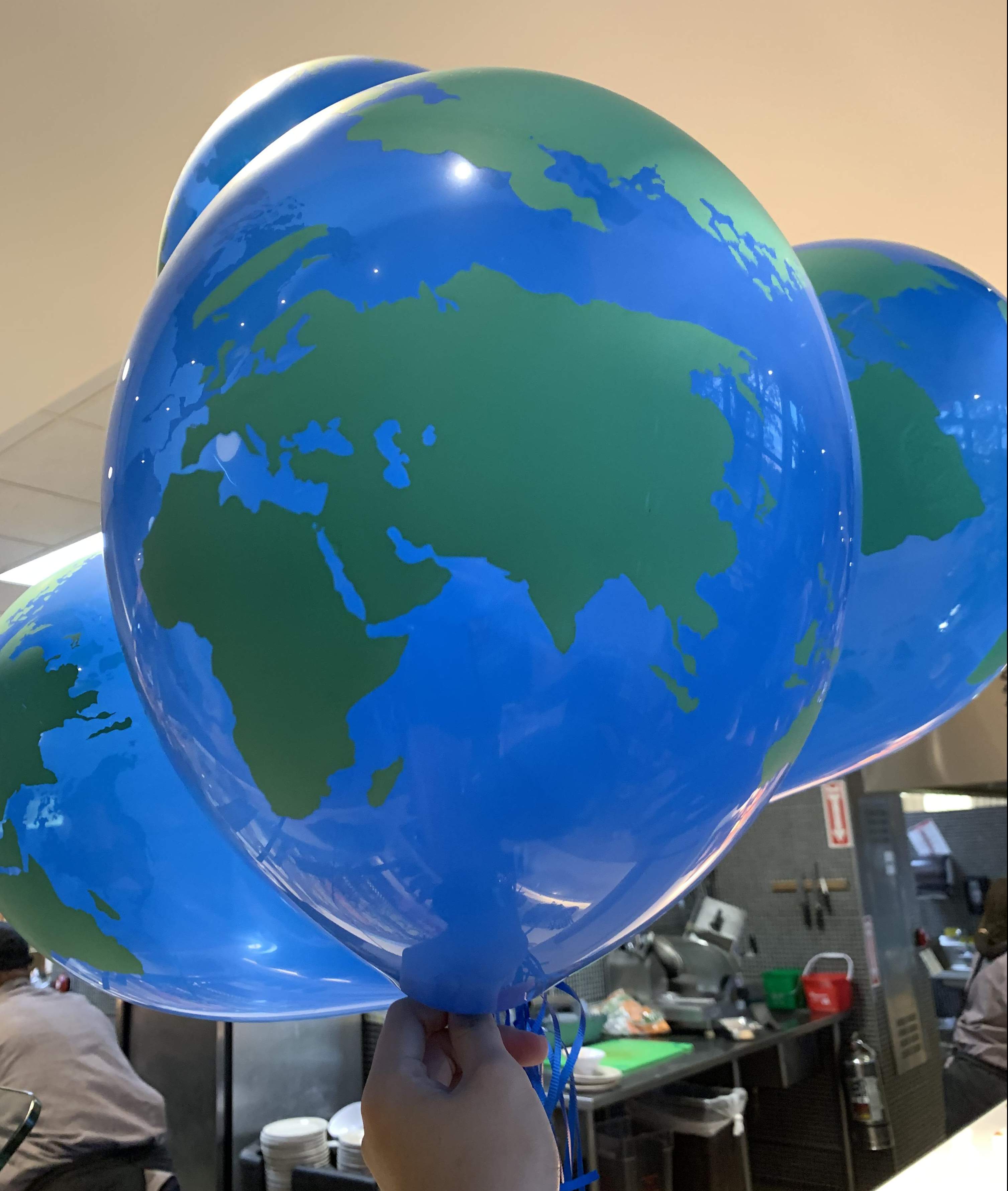 Forget about the sloppy lines and the slight haphazardness regarding islands, what is that freaking large landmass north of Siberia? It can't be America, that is visible shining through the left side of the globalloon.
Last edited: Dec 17, 2019

Albidoom said:
what is that freaking large landmass north of Siberia?
Click to expand...

Albidoom said:
And now for a balloon globe:

Forget about the sloppy lines and the slight haphazardness regarding islands, what is that freaking large landmass north of Siberia? It can't be America, that is visible shining through the left side of the globalloon.
Click to expand...

"The top of this thing is looking kind of bare... is there anything up there really far north? There's land in the Arctic right? I think there is, anyways. I'll just put a nice big mass up there. No one will notice if it's wrong."

Well, there are some people in Belarus who consider Belarussians to be the “real Lithuanians” and Belarus the only true heir of the Grand Duchy… They’re fringe tho.

Now for the next globe.

Judging from where the equator must be (where the two halves of the globe were glued together, i.e. the Equator runs along North Africa, almost in the Mediterranean) and the large Svalbard (and Scandinavia also seems a bit upsized) I guess the globe maker in this case took a mercator projection and tried to slap it back onto a globe without shrinking the upper latitudes back to normal. (hence why neither Greenland nor Antarctica, not enough space for their mercator sizes) 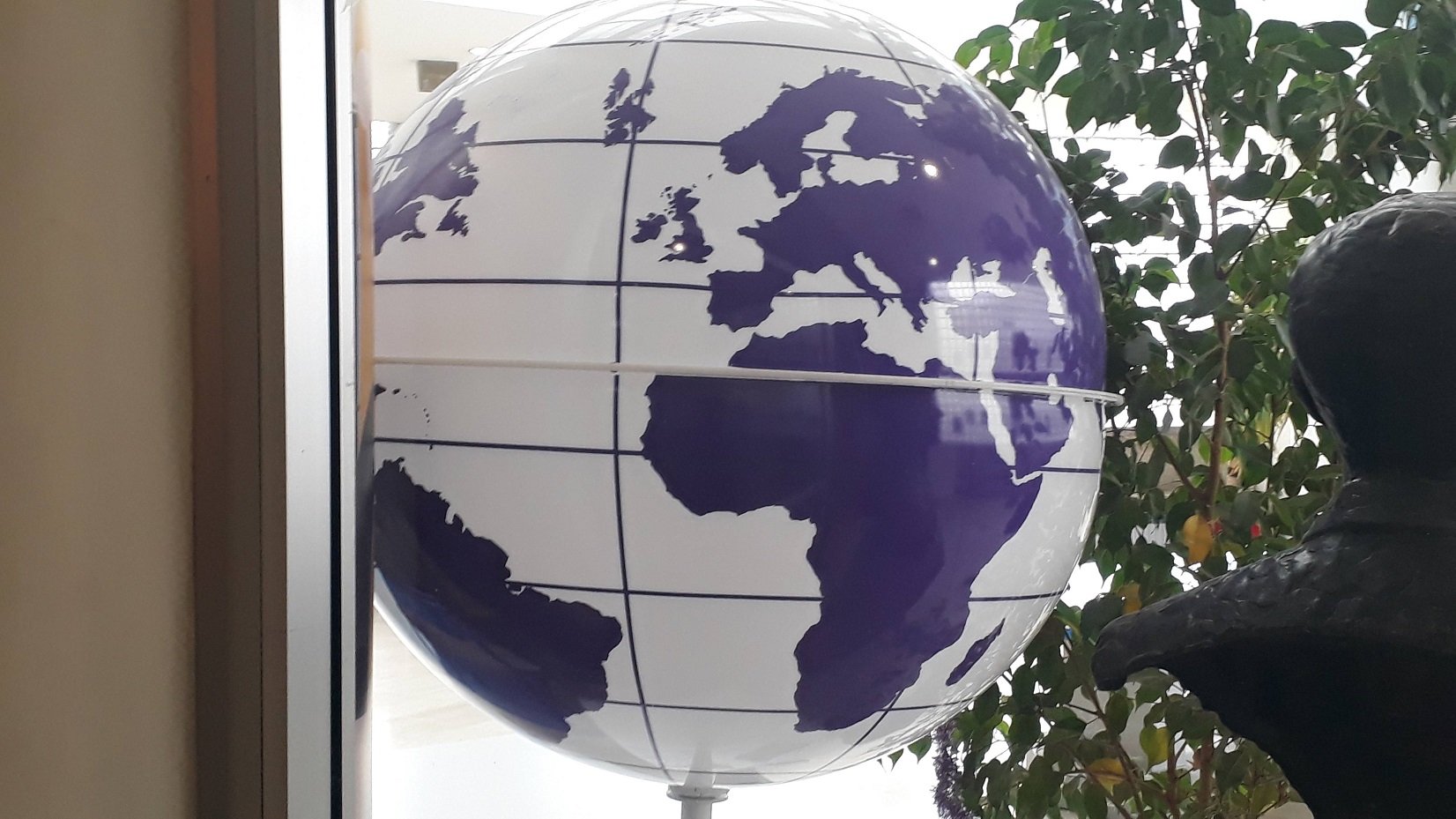 Albidoom said:
Now for the next globe.
Click to expand...

Extraordinary what they did to Scandinavia there. Even more extraordinary that literally no one said “that doesn’t look right” about any of this. Zero effort whatsoever. Not on realigning North Africa to actually fit itself (though you’ll notice it DOES match up on the eastern end, which is stranger). Not on the Labrador coast. How could they even justify Svalbard replacing Iceland or bumping the British Isles down to make room for Scandinavia? And some actually wonder why most people are so ignorant of so many things; those who are supposed to be responsible for truth are just pissing on us without the courtesy of calling it rain.

From a netflix documentary: 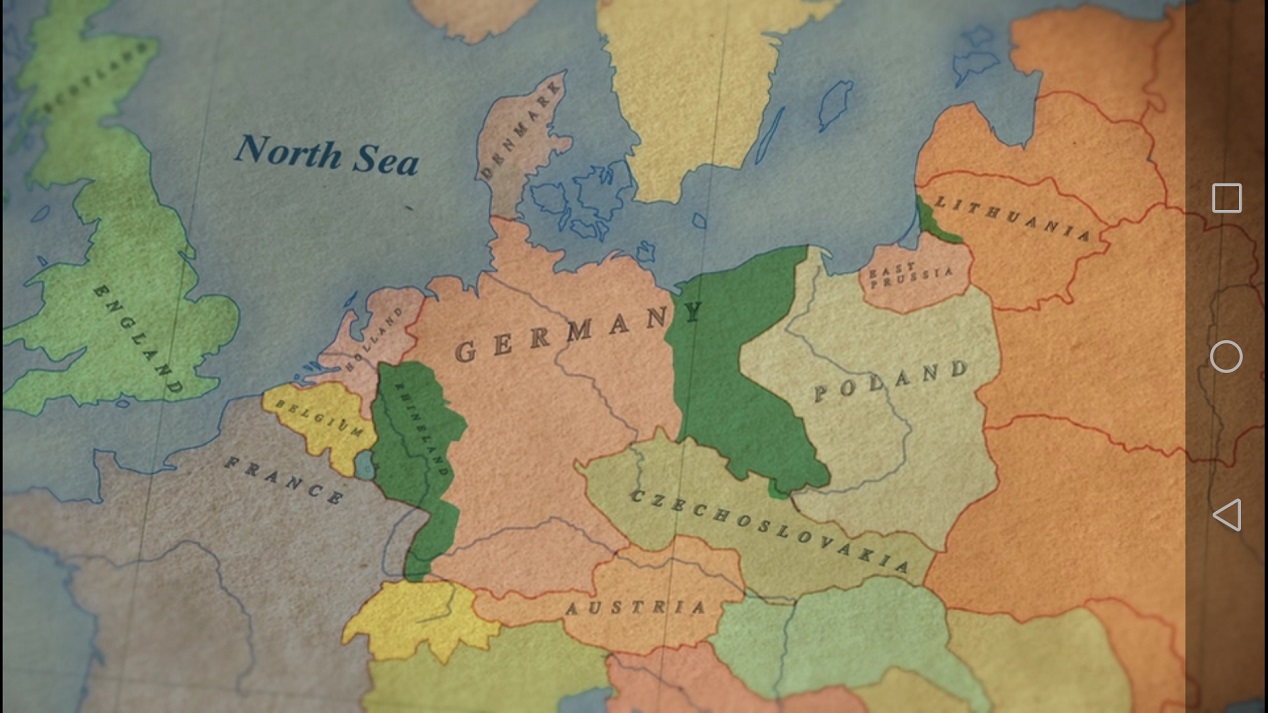 Probably from the same video (and if not, they at least used to f--- up the same basemap):

Judging from the colors, Nazi Germany occupied the Jutland peninsula before their invasion of Poland... 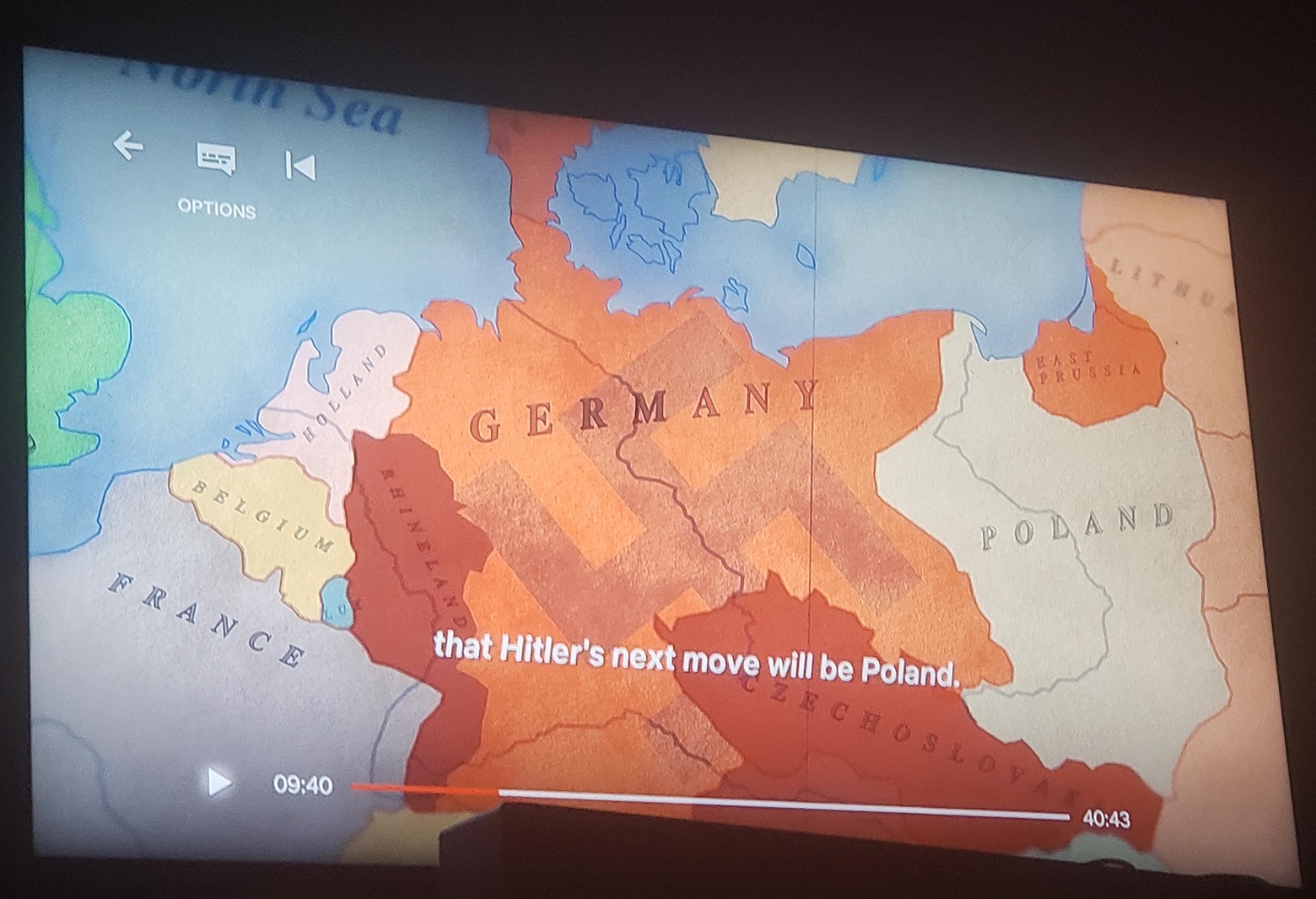 “Ah, shit...”
“What?”
“I deleted the layer with the island land.”
“Okay, just undo.”
“No, I must have done it last time; I can’t go back that far anymore.”
“Oh, well... just duplicate the coastline layer and use an eyedropper to match the colors.”
“Yeah, uh... how do I do that?”
“Wait, really? Look, you just–“
“DO YOU TWO INCOMPETENTS HAVE THE MAPS READY FOR THIS THING YET? WE’RE PUBLISHING IT IN 20 MINUTES AND THE EDITOR CAN’T POP ANY MORE ATIVAN WAITING FOR THE RAW CONTENT TO ARRIVE!”

Albidoom said:
From a netflix documentary:

Probably from the same video (and if not, they at least used to f--- up the same basemap):

Judging from the colors, Nazi Germany occupied the Jutland peninsula before their invasion of Poland...

Though Hungary looks awful, the Soviets had too much land st this point in time, and I don't see th need to label both England and Scotland. Danzig not being there is also a tad bit weird, but maybe they didn't have the funding to draw the extra lines. They seem to be pretty hard pressed.
You must log in or register to reply here.
Top
Top