The POD dates back to the Castilian War of Succession in (1475-1479 OTL), with France assisting the Portuguese Queen Juana much more than OTL. With Aragon squashed the French were more free in the Italian wars and managed to secure Naples. The HRE soon entered a stand off with the now more powerful France and over the course of centuries the Germanic nations and Romantic nations united against each other. The Germans still suffered from sever disorganisation though, shattered into hundreds of states, but that all changed in the mid 1700s with a massive revolution that united the Germanic World and set them on what the people felt was their path to global dominance. The war spared by this revolution saw them triumphantly capture Moscow and turn Russia into a (significantly declawed) republic as well. Against this might the Romantics turned to the Ottomans for aide, the only force able to balance the Germans gain of Russia. As the 19th century approached Europe began to engage in the world abroad in full force, both the Germans and the Romantics tried to overthrow China and gain that mighty jewel for themselves. They ended up driving China into a Warring States period and soon backed out when they realised the Chinese were still their technological equals and had serious numerical advantages. The French turned to Gorea and Siam though, looking now for allies rather than colonies, and they helped those nations industrialise to counter Russia's eastward expansion. The Germans tried to conquer India, but the Shah had seen what the Europeans had done in China and drove them off the subcontinent with force of numbers, only after the sever and uneven losses did the Indians realise their armies needed serious reform. The turned to the Ottomans for aide in exchange for assisting in taking apart Persia. The Shah's attempts at increasing centralisation was unpopular amongst Hindus who soon overthrew him and, for a while, cut India off from European influence. The 19th century ended in a massive conflagration which pushed the Germans into a position of dominance, but the post war era saw the successful testing of a Latin nuclear weapon in the Sahara and by the present date of 1948 an arms race is in full swing, with the Latins leading the way, followed closely by Germany. Gorea also has a substantial stockpile, convinced that China will attack. 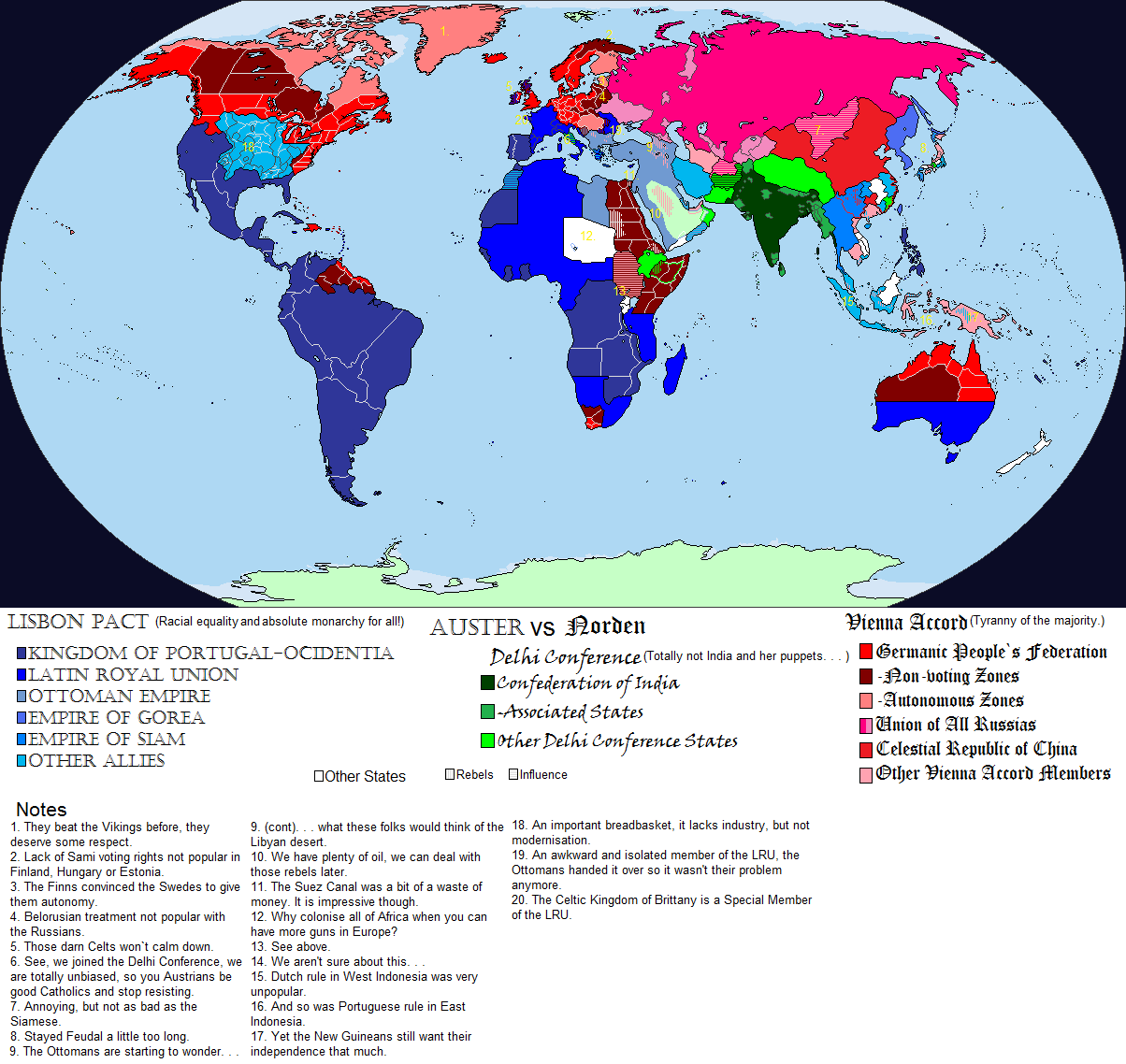 Columbus can't get Ferdinand and Isabella to bankroll his crazy scheme--for one thing, everyone knows that you can't reach China by sailing west; the ocean is too wide and also we're too busy pushing the Moors out of Iberia and back into Africa. Sorry.

But eventually Henry VII of England ponies up some cash, and Columbus sails off with a couple of ships, and eventually returns claiming to have found the island of Cipango. So that sparks some interest. A lot of powers get in on this new game. France wins big; it's French conquistadors who knock over the Aztec and Inka empires, and most of that sweet, sweet bullion goes into French coffers to pay for a few rounds of wars. Britain grabs most of the rest of South Columbia and some decent islands, Portugal splits North Columbia with the various Protestant powers, and Spain grabs a chunk of Texas, although they're mostly pretty busy getting nowhere in North Africa.

Time passes; a few wars shake up Europe. The southernmost British colonies break away to form the Commonwealth of Columbia. Another round of wars. The riches of the Indies beckon. (No one gets confused about which ones, because they call the Caribbean Islands "Cipango" instead.) Some guys in England and Flanders start to figure out what all this coal might be good for. Another round of wars gives some of the Columbian colonies a chance for independence. Mostly no one notices. Things are pretty quiet up there in North Columbia.

The German states start pulling their act together. French discovers yet another continent--hot, dry, and full of poisonous animals. Seems like a great place to send troublemakers and rabble-rousers. (There sure are a lot of those these days. How could this possibly go wrong?) Russia starts to emerge from medieval squalor; the Poles and their friends aren't too thrilled. China stays on its toes and keeps up with the foreign devils, but the French push their way into Japan.

The industrial revolution is in full swing. The Germans are making up for lost time--where can we find a few colonies? Africa! It'll be the next big thing! (Except that instead of valuable stuff, it's full of diseases and grumpy natives with spears.) French are there too. Everyone's getting a bit nervous about these French. Alliances start shifting. The French colony in Australia revolts (what a surprise!) and manages to make it stick. The first aircraft take to the skies.

Round one: fight! Germany, Spain, England, Poland vs France. Lots of people die before the generals figure out the best way to use these new-fangled machine guns. Eventually it sort of peters out. A few colonies change hands. No one really wins, but England doesn't really lose. Business is good, business is bad. Regime changes happen. Germany goes "Anarchist." (Definitely not our sort.) Encourages oppressed minorities of Europe to follow suit. A lot of people like that idea; a lot of governments don't. Alliances shift a bit; it's about time for round two.

Round two: fight! Germany and Poland vs. Spain, France, Russia, Austria. The Brits stay out of it this time. Probably a good decision. Things don't go so well for Germany and Poland. They lose some territory and their colonies, such as they were. The Republic of the Four Lands is back down to two. The victorious powers sign some treaties, making sure this kind of radical nonsense (voting? a free press?) doesn't happen again. Some of those former radicals flee abroad, to more hospitable southern climes, where things are freer.

The Columbian Commonwealth and the Social Republic of Terrerouge start a club of their own, and get some buddies to join. They don't like the way the French and Russians are throwing their weight around. The Ottoman Empire (the sly old man of Europe) is interested. So are the British and the Portuguese. The Chinese remain as inscrutable as ever. The Columbians test a new weapon in a remote site in the Atacama. A few months later, the French test a similar one deep in the Sahara. An awkward silence settles over the world. The year is 2009.

Map 1: who are all these people? 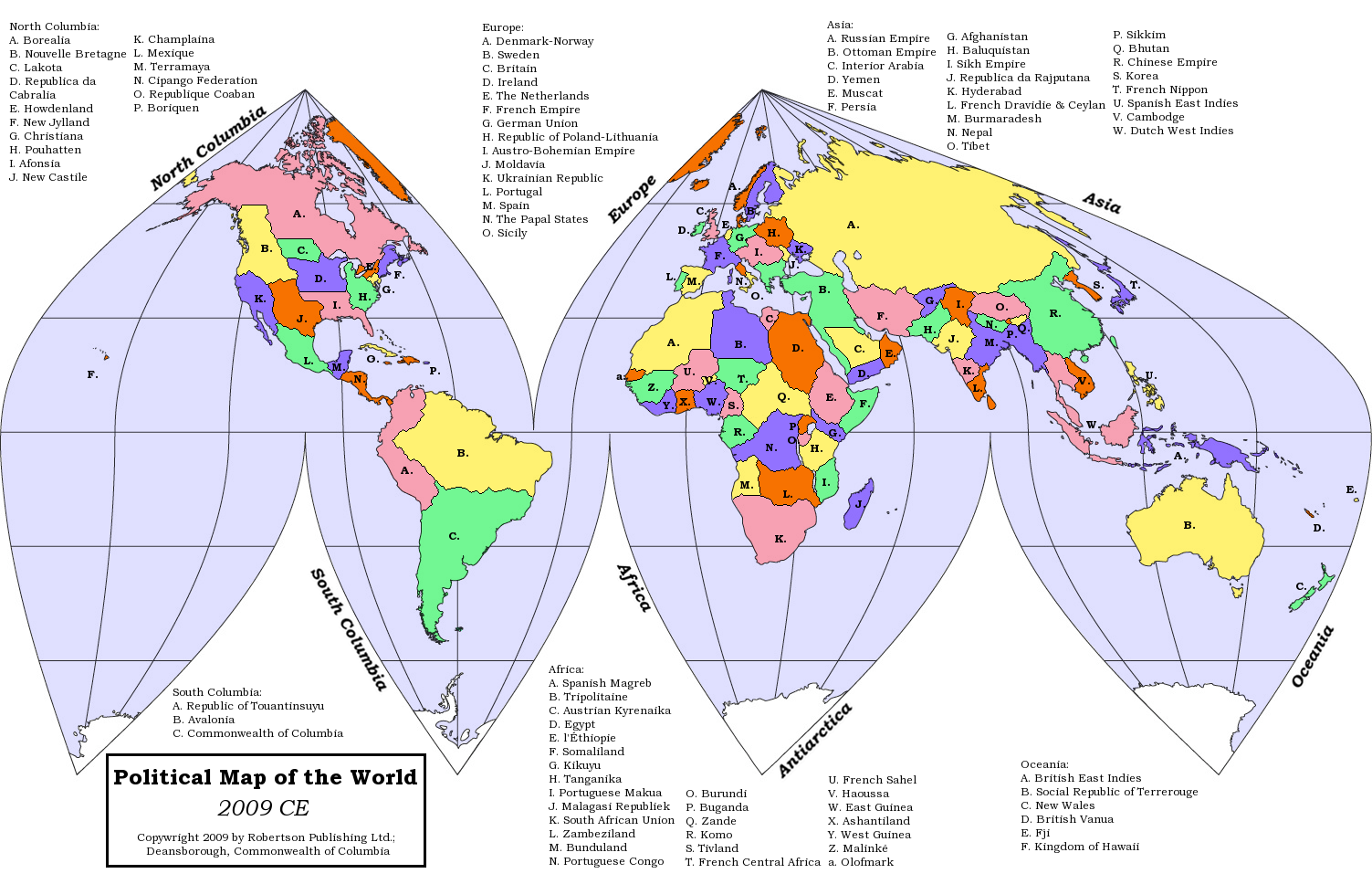 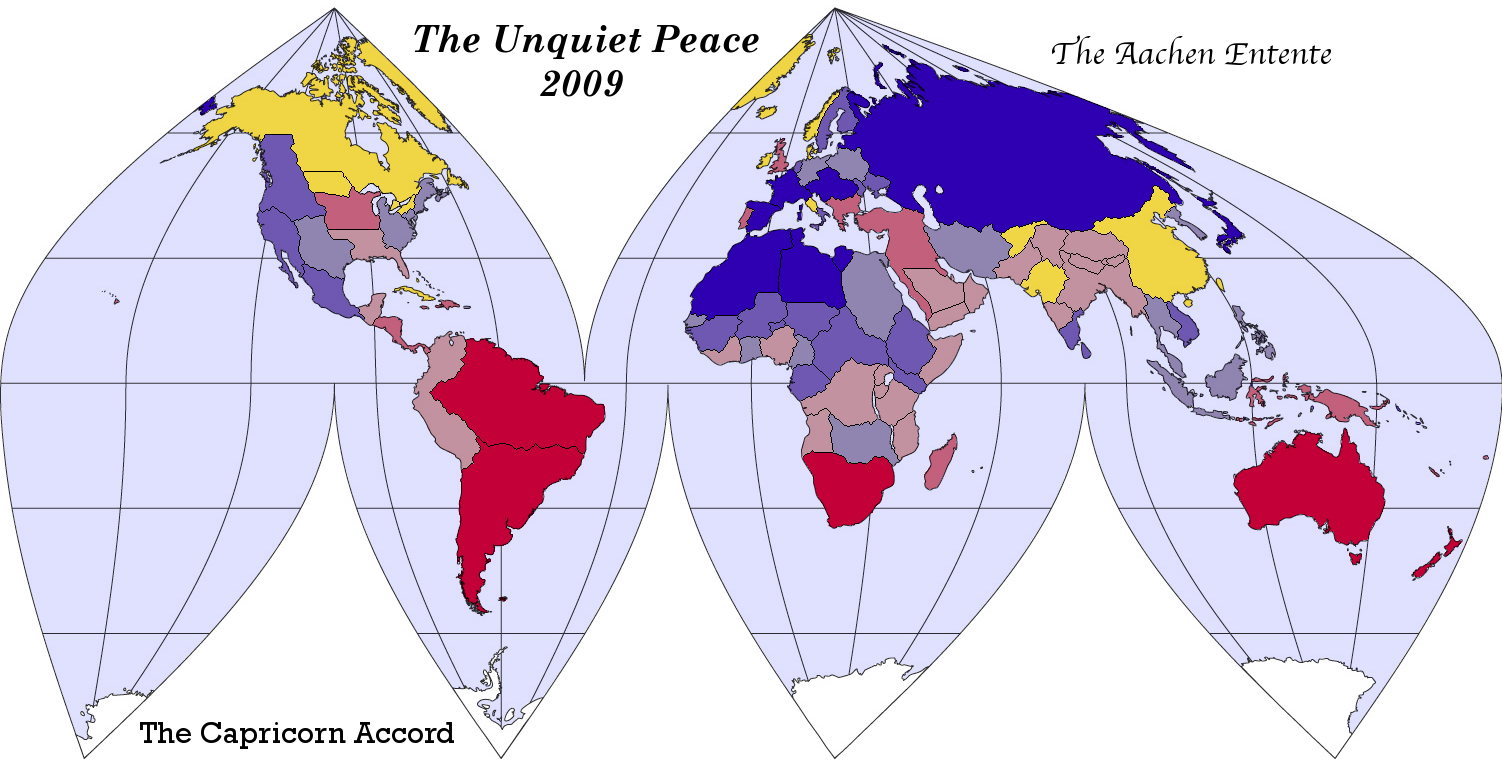 Surprisingly, I won, with Kaiphranos in second and Beedok tied with Muwatalli" for third.
You must log in or register to reply here.
Top
Share:
Share
Top