B_Munro said:
From Imperator, a map where Austria surrendered earlier in WWI and things have gone a bit differently in the runup to the second...
Click to expand...

TheLoneAmigo won that one, with Scarecrow as runner-up.

Round V: show 6 nations fractured in WWI and its aftermath.

Alas, EdT's map, the winner, is no longer accessible. Nor is Scarecrow's.

And now, a central powers victory.

Fractured Nations:
1. Britain, forced to recognize a united Ireland's independence or face starvation.
2. Russia, which ceded numerous territories and went through a popular revolution that was crushed by the Germans.
3. Belgium, which was split into two separate nations.
4. Romania, which was split into two separate nations.
5. China, which was punished for allying with the Entente by being forced to give independence to the German dominated province of Shandong.
6. Serbia, which was separated from its Macedonian provinces and absorbed by Austria, Albania, and Bulgaria.
7. Greece, which had to cede territory to Bulgaria. 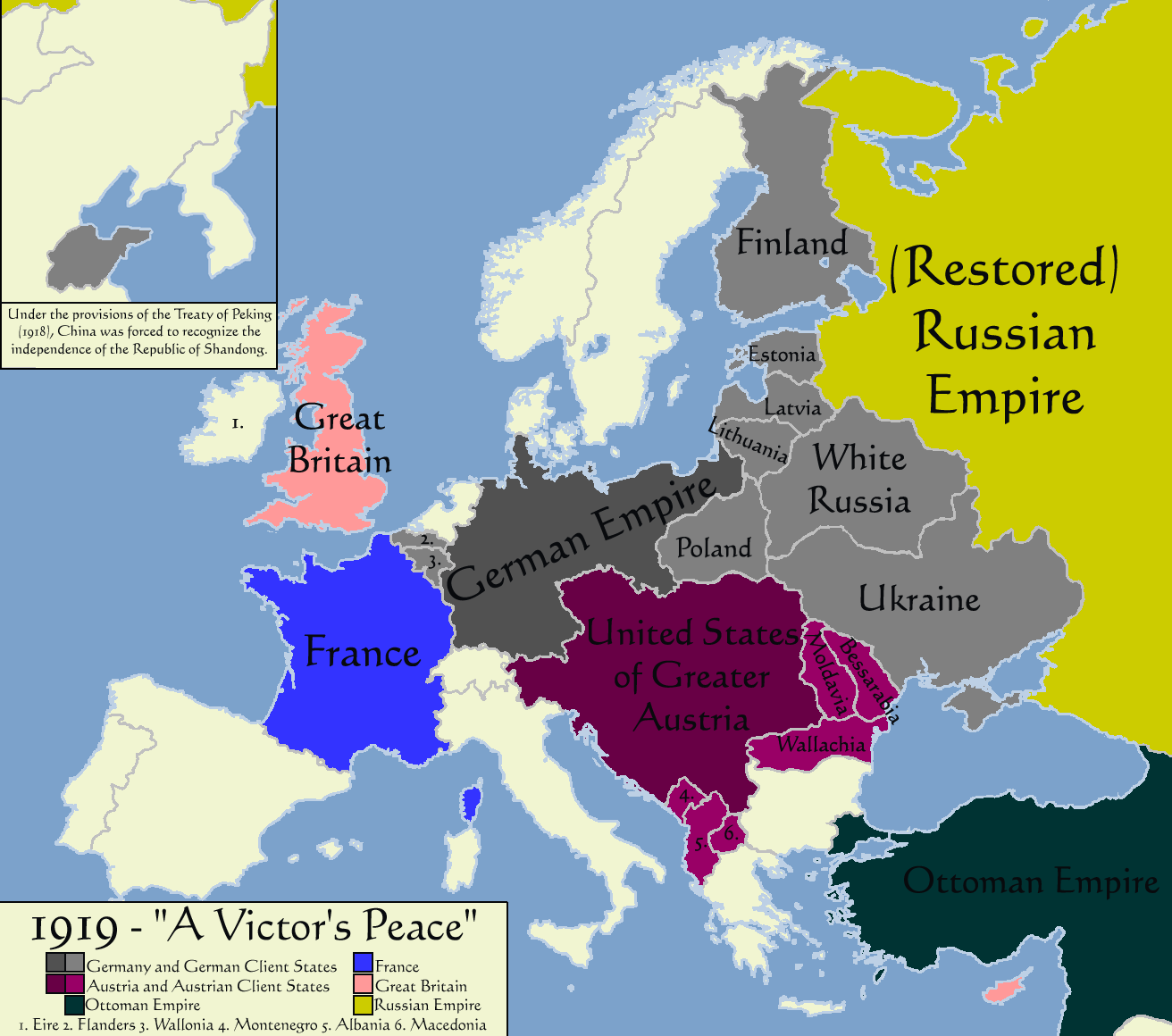 Wasn't going to post anything this week but I found I had some time just before the due date.

Czechia, the Rhine Confederation, Panslavia and Mecklenburg are all the same colour because they're French-backed states.

I made a nice textured version but it was too big to upload , so enjoy the vanilla one. 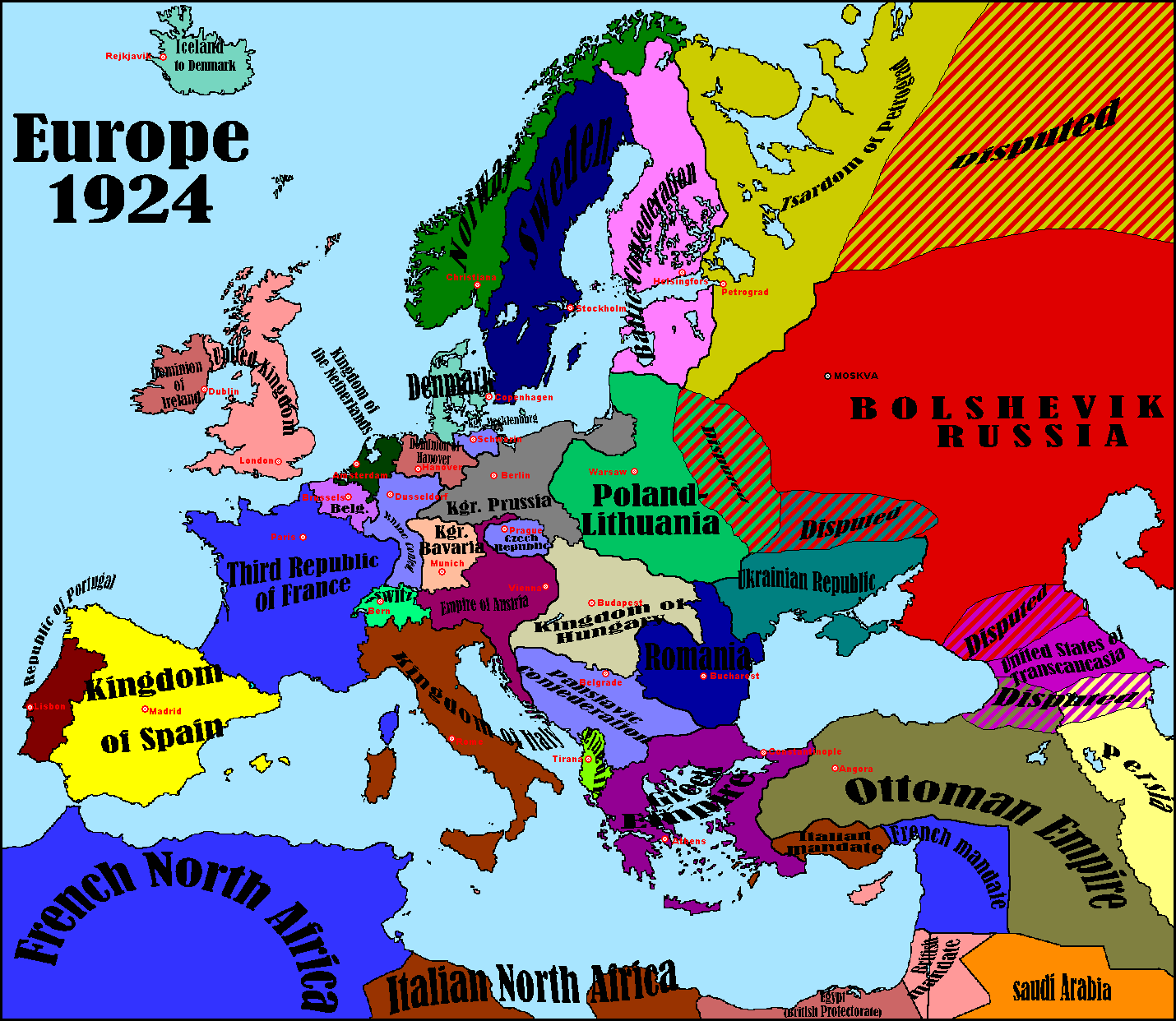 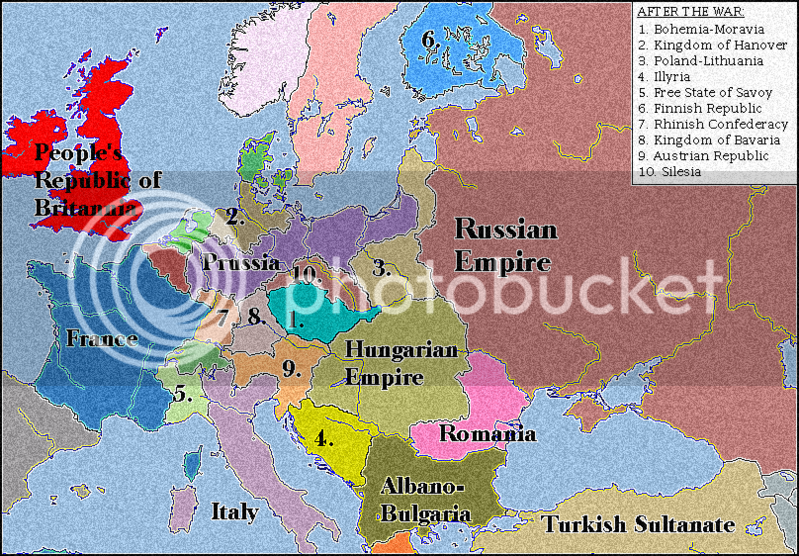 Everything changes with the death of Bonaparte - the expansion of the United States is strangled in its cradle; the British Empire is struck down by revolution; and the French Directory rises in its place... spreading libertie, equalitie, and fraternetie to every quarter of the globe. Korea blossoms while Japan and China collapse; the Kalmar Union is reborn; and a Lusitanian Empire arises to straddle the Atlantic. Meanwhile, in a quiet southern corner of the globe, the last remenants of British imperialism forge a new ideology, conquer a continent and set their sights on the rest of the world...

The Year of the Ox dawns. 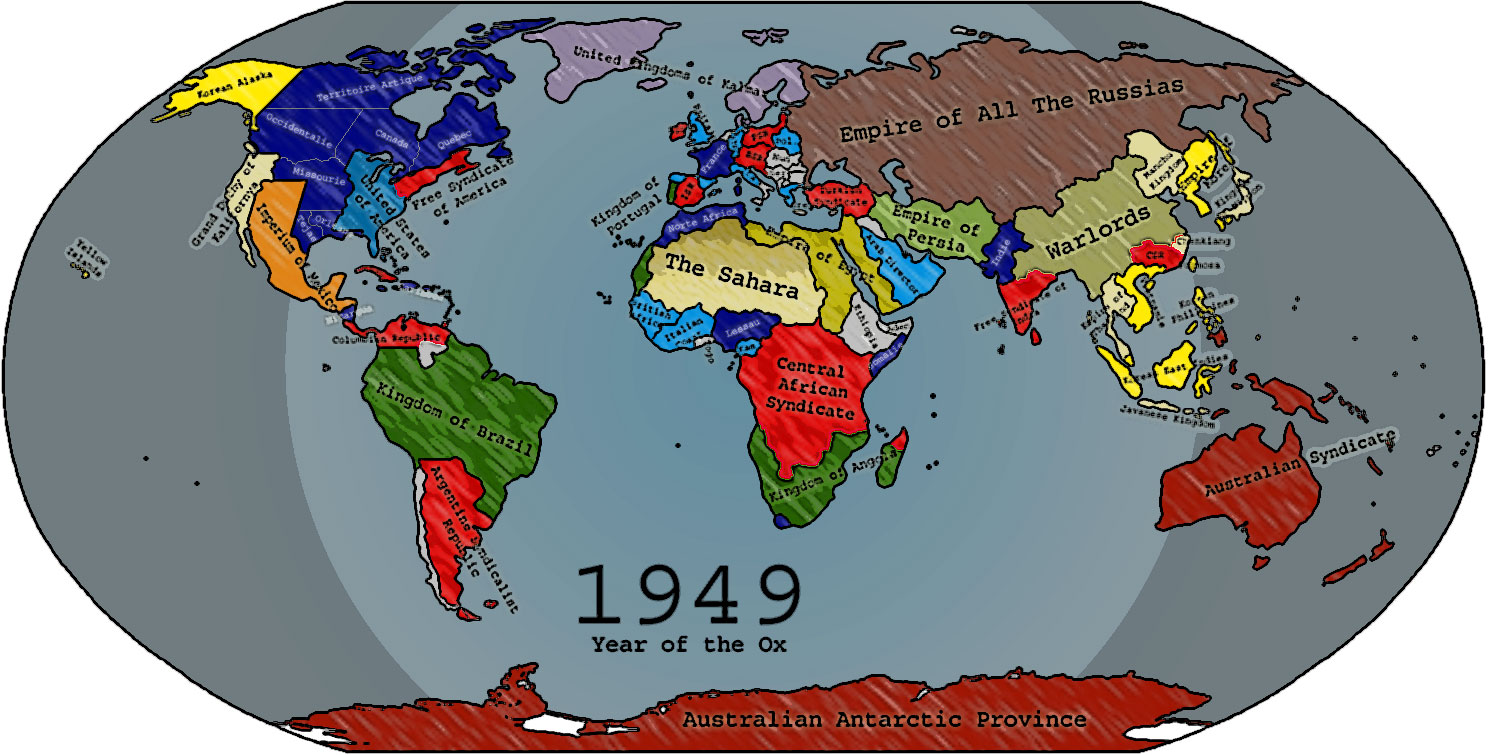 Napoleon's death changes events significantly- France had many great generals, but none other who would follow the course drawn by Napoleon. By 1900, through a series of massive wars, the Revolution has been spread across Europe... Britain, however, dominates the rest of the world, Russia switches alliances nearly weekly, China lies in ruins, and the Braganzas yearn to reclaim the fatherland lost so long ago... 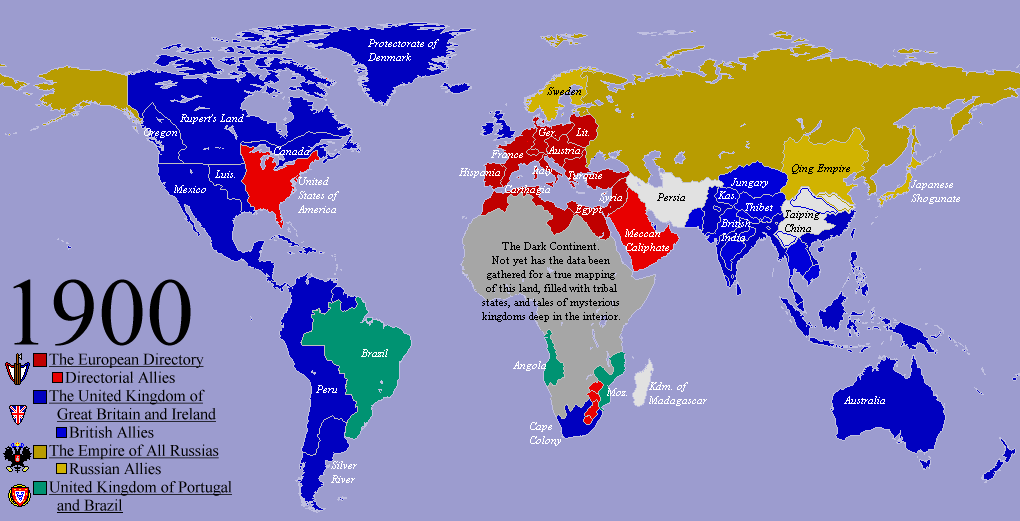 EdT, sadly disqualified for not being a world map: 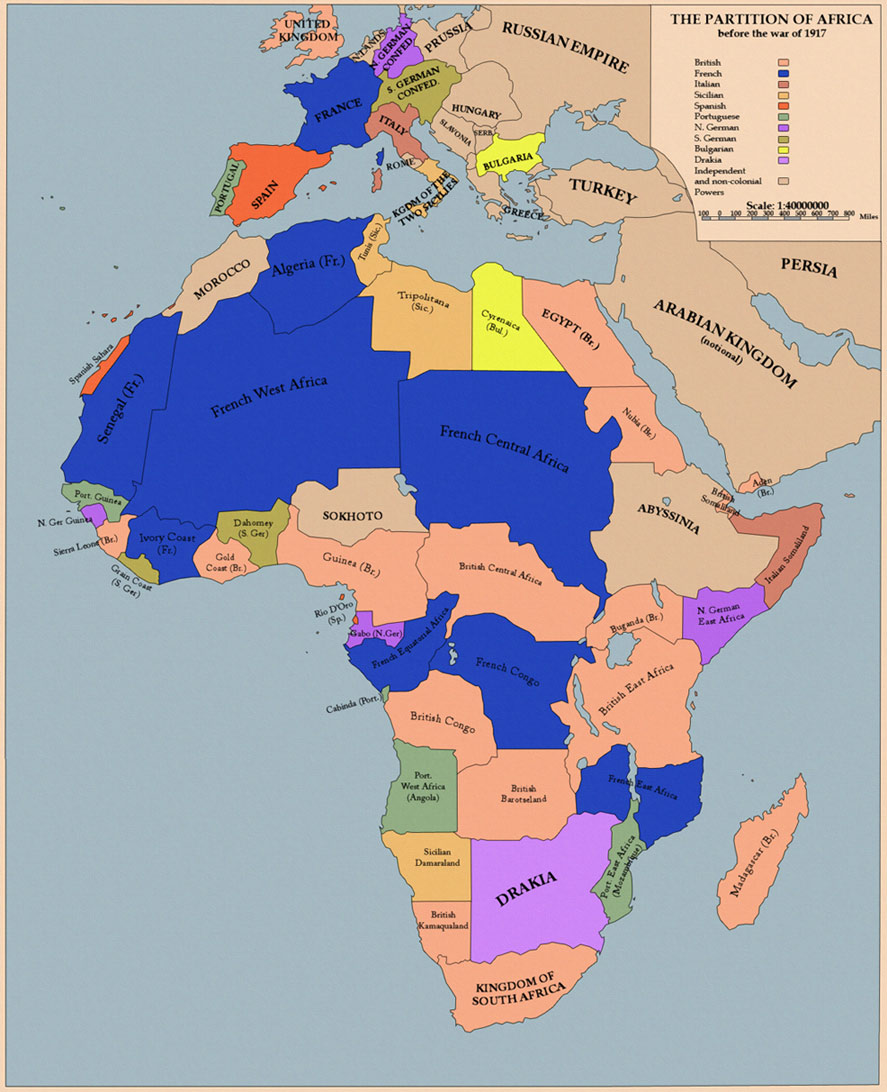 Uh yeah, this is the map.

uh...French War with Austria in 19th Century over Italy: resault an independent Kingdom of Italy, and France gets OTL belgium.

No war of 1812, but a similar war between Britain and USA, USA doesnt do so good.

slavery trade was abolished at the end of the 19th Century by Britain, France USA et al, but those pesky Omanis and Brazilians continue to conduct the trade.

uh...things to look for on the map

The Omani port on the Congo

uh, thats it. I tried doing some fancy photoshop stuff but ran out of time, so i just had to do the curvey text thats becoming standard issue around here

That led to a run-off between TheLoneAmigo and Scarecrow.

Okay, so... the POD is the US taking direct control of Shanghai at some time during the 19th century, as its own version of Hong Kong. Later, the British take control of Port Arthur.

From there somehow we get to the present, with a fascist state (Han China - the name refers to their Han-supremacist ideology) in control of the majority of the Chinese heartland, facing off against the unsteady alliance betweeen the People's Republic and the Democratic Republic, while all parties involved worry about the rise of the Japanese Empire and their puppets in Manchuria and Taiwan. 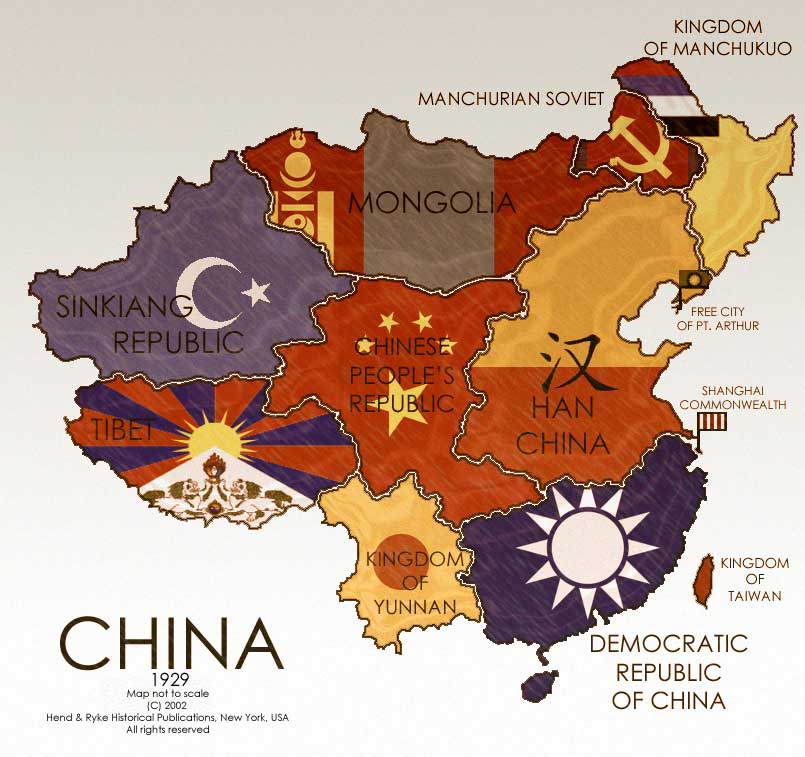 The thing that took the most time was getting the map the right size, since the basemap is so massive...

My PoD is that the Decembrist revolt in Russia is sucssesful, turning Russia into a liberal, forwards country.

being a bit more powerful, Russia is able to secure a peace more to thier liking at the end of the Crimean War. This leads to a greater Anglo-French cooperation against the Russians. Fearful of Russia gaining influence over China, the British and French give aid to the T'ai-p'ing rebellion, and a T'ai-p'ing Empire emerges in the south, chasing the Machus back to Manchuria.

Um, taiping china doesnt realy survive after the death of Hong Xiuquan, and at the end of the 19th century the Kingdom of Heavenly Peace collapases.

France collapses into a socialist revolution after her loss during the Franco-Prussian war, and her model of communism that is exported around the world.

This map is just after the Great War, these are the nations that have been recognised by the Great Powers; those inbetween the T'ai-p'ing remnant and Manchuria are no more then glorified warlords. Wether any of these nations can survive in the long run, thats a different question.

thats it realy. I will post the non-shrunk map in the Map thread. 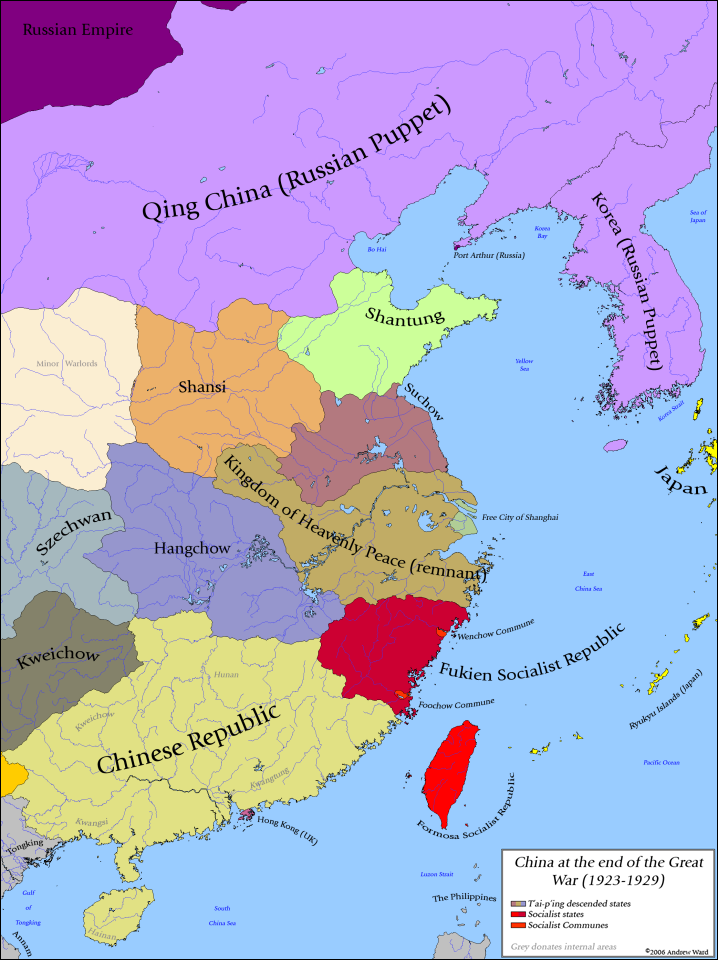 Scarecrow won that one, but then there had to be a showdown with Diamond for Map King title: the contest was a more successful reformation.

OK, I guess I'm first. I'm not entirely happy with this, but I think it conveys all the information I wanted it to, anyway. The POD is that Jan Hus lives another ten years before being executed by the Church, enough time for his views to become even more entrenched in Bohemia, Moravia, and other lands.

This sparks a somewhat stronger, earlier, and more violent Reformation - religious war spreads throughout Europe, and Catholicism by 1650 is a religion of the south. It has been driven almost entirely out of the north of Europe, with the notable exception of England, where Lancastrian monarch still rule. Ireland is a fiercely republican and Hussite nation with a strong navy and extensive North American colonies.

This map shows the situation in Europe in 1800, at the conclusion of a 'Great War', where the three great Calixtine/Hussite kingdoms, Bohemia, Poland, and Hungary, united into one uber-powerful United Kingdom.

And Scarecrow shot back with this:

I dont have such a defined POD as Diamond: more that Protestantism is slightly more sucessful in the German states, and that the Catholics in France loose the French Wars of Religion.

When the Bohemians revolt from their Catholic masters in 1618, the *Thirty Years' War starts, but with an earlier intervention by a Protestant France on the side of the Protestant Germans, thier victory is assured. The Hapsburgs are dethroned in Vienna, and the Spaniards kicked out of the Spanish Netherlands (which the French kindly take). the Austrian Hapsburgs lands are divied up, and the entire Holy Roman Empire is reorganised. Ecclesical lands are confiscated and divided up. the Electoral system is reformed, the role of the Princes is kept in check (no foriegn alliances in this timeline) and Imperial army is put in place, yadda yadda yadda.

By now, its the end of the 17th Century, and a major confilct appears to be lurking on the horizon, with tensions across Europe.

Enjoy, because this map stole my soul! 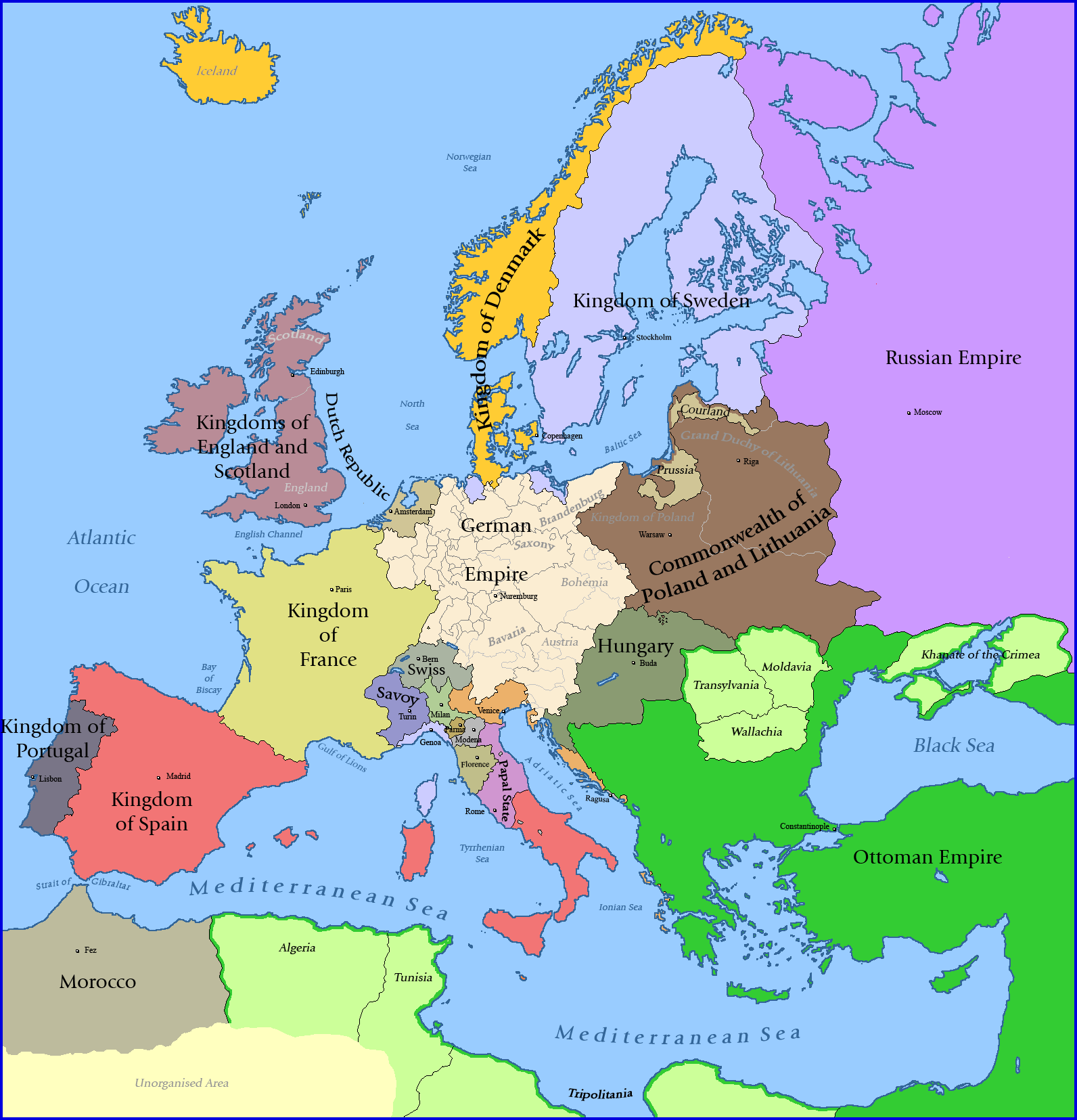 That was the original map contest! Map contest II maps tomorrow: other stuff to do tonight.

Donor
There were some... interesting... font and texture choices made by the cartographers of yore.

Ah, good times. I remember setting up the very first map contest. Trying to figure out a voting system for the judges was one heck of an exercise (to keep it fair and all).

Got to say I still prefer the old map contest over the map of the fortnight setup that took over. Glad you dug up some of these old maps B_Munro.

Take a good look kiddies at good maps and how far we've gone from the sad pixlized ones that came before the golden age of map making.

I love this thread

On to map contest II, round I: