Since somebody suggested this, thought I'd repost some of the cream of the crop of earlier contests.

Starting with round 2 of the original map contest back in 2006, (fantasy maps) from Black Knight... 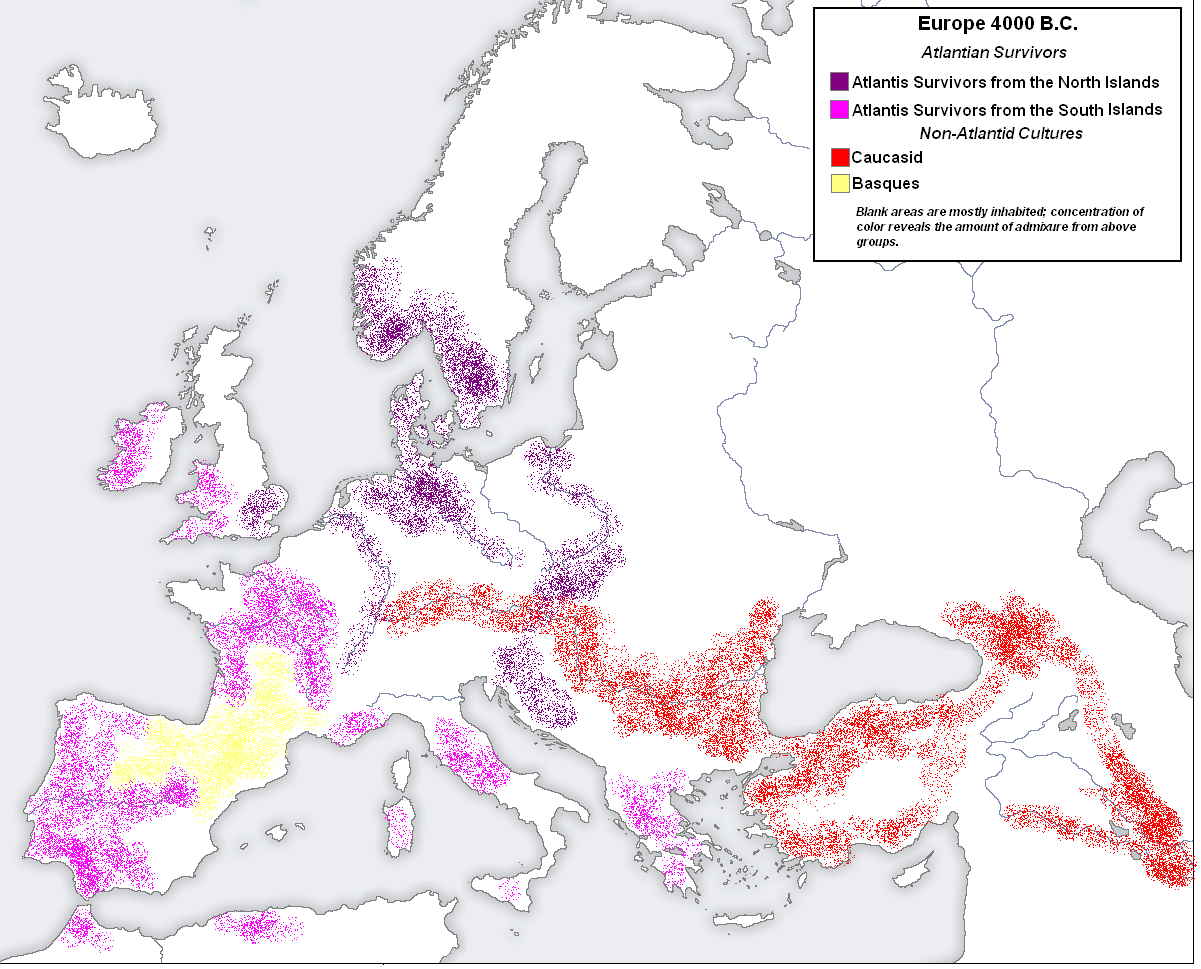 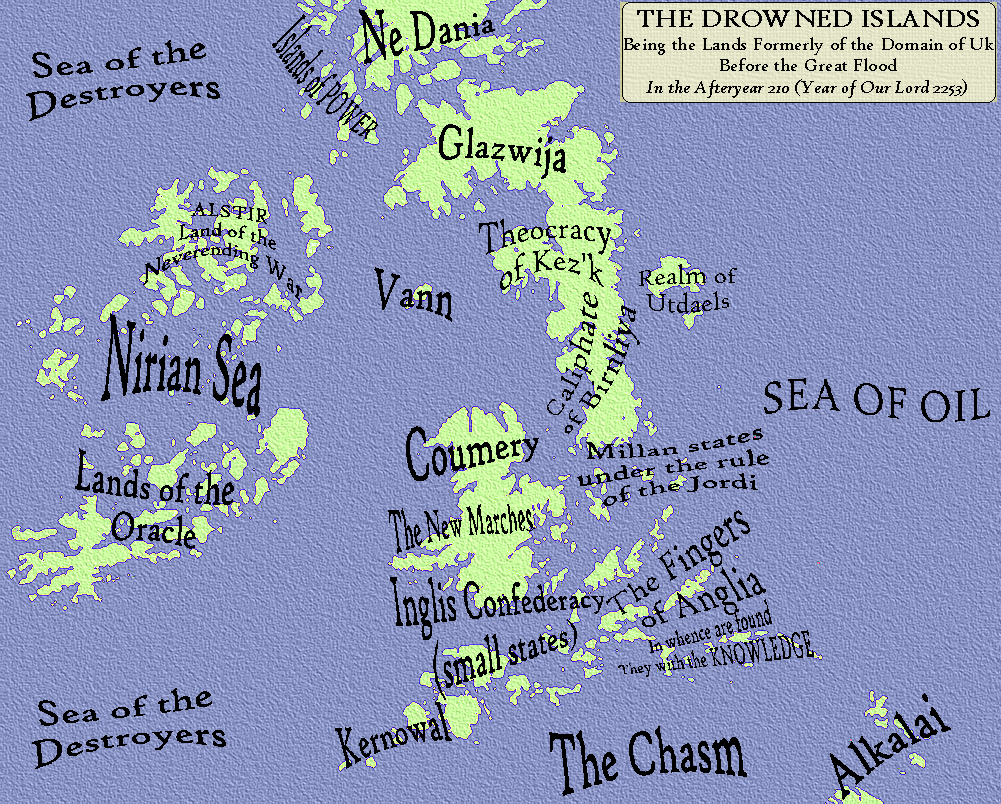 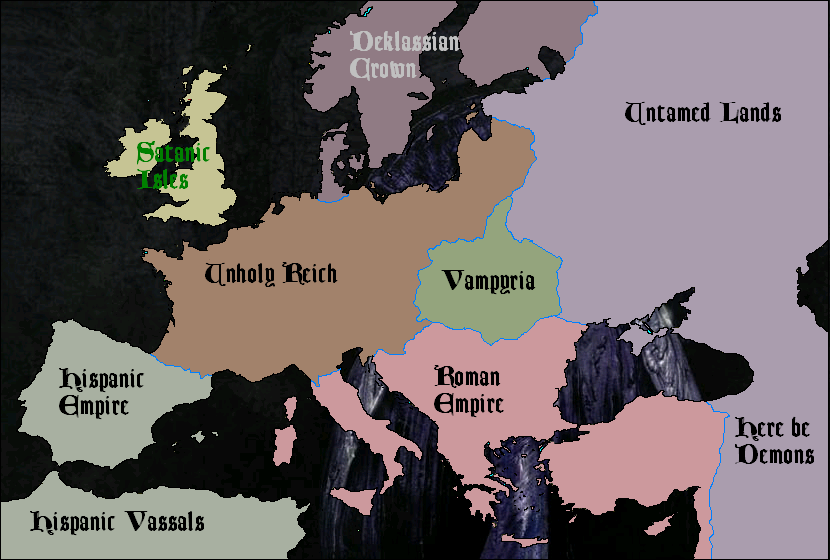 And the winner of that round, Kabraloth. 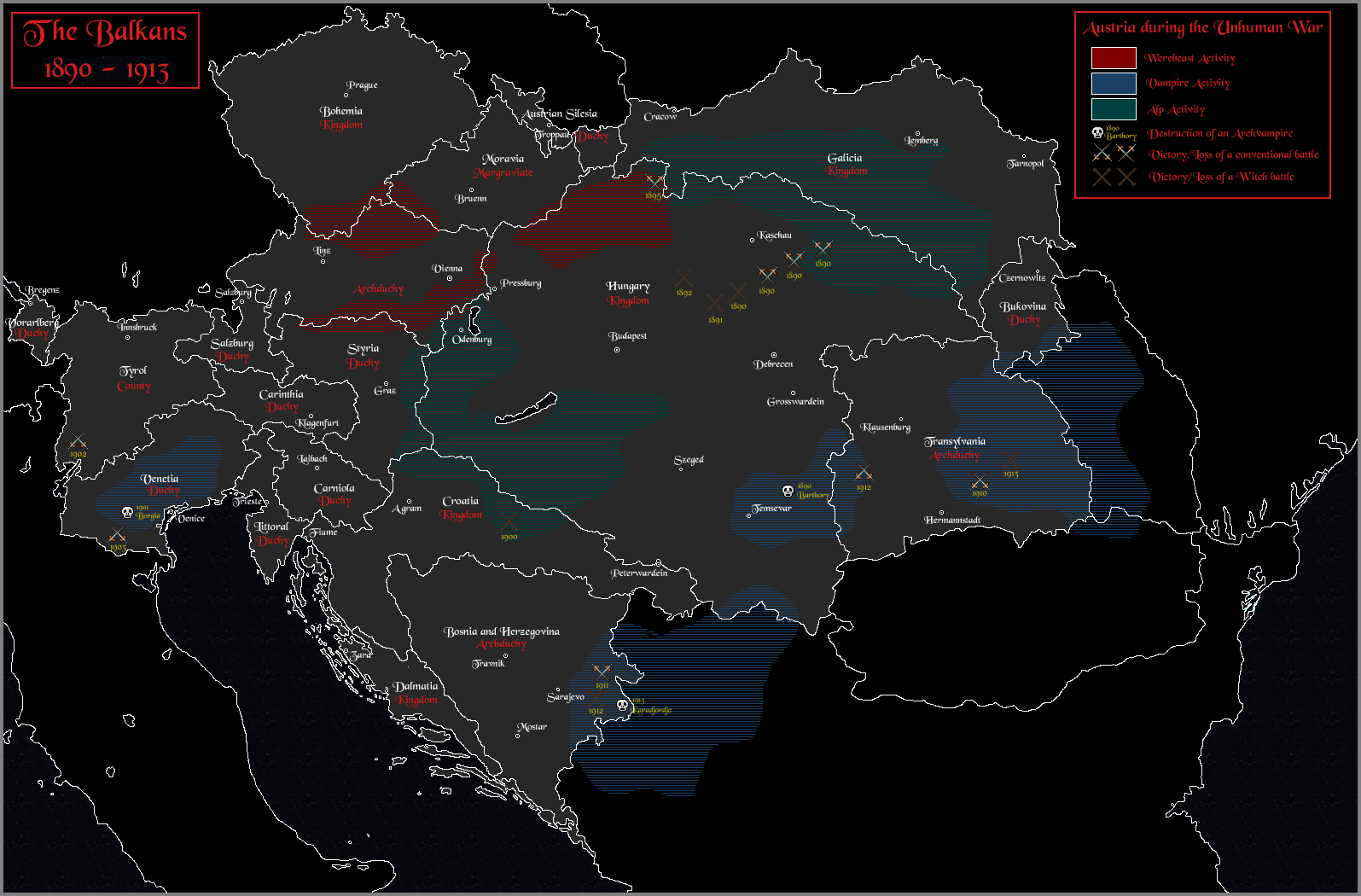 Round III, Whatever maps, starting with Imajin... 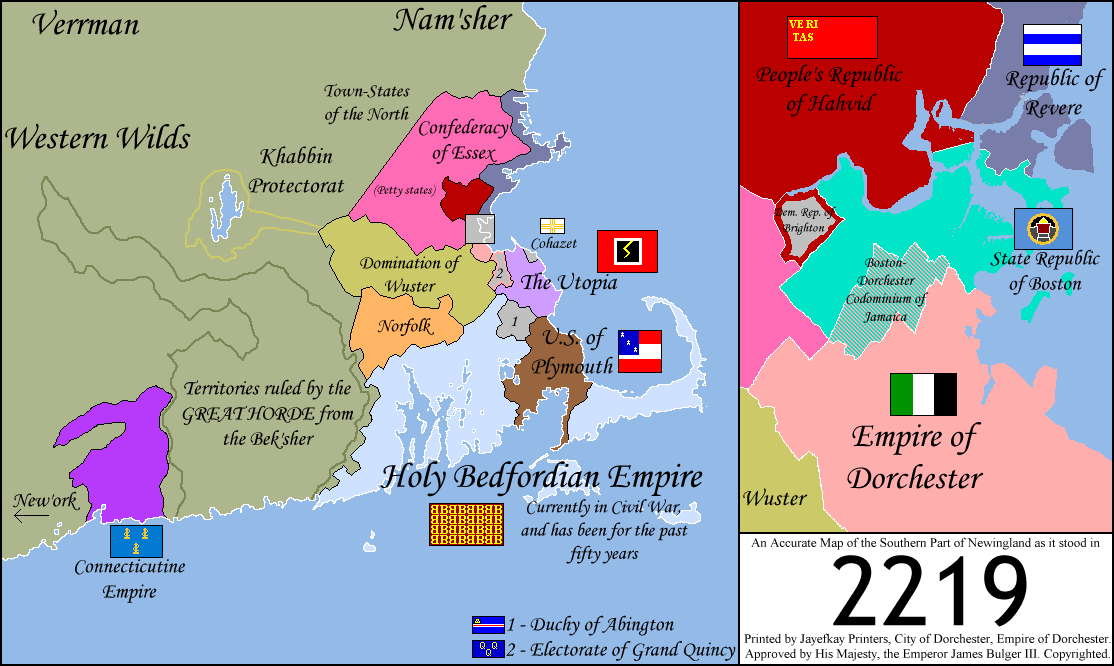 From EdT, a Roman New England... 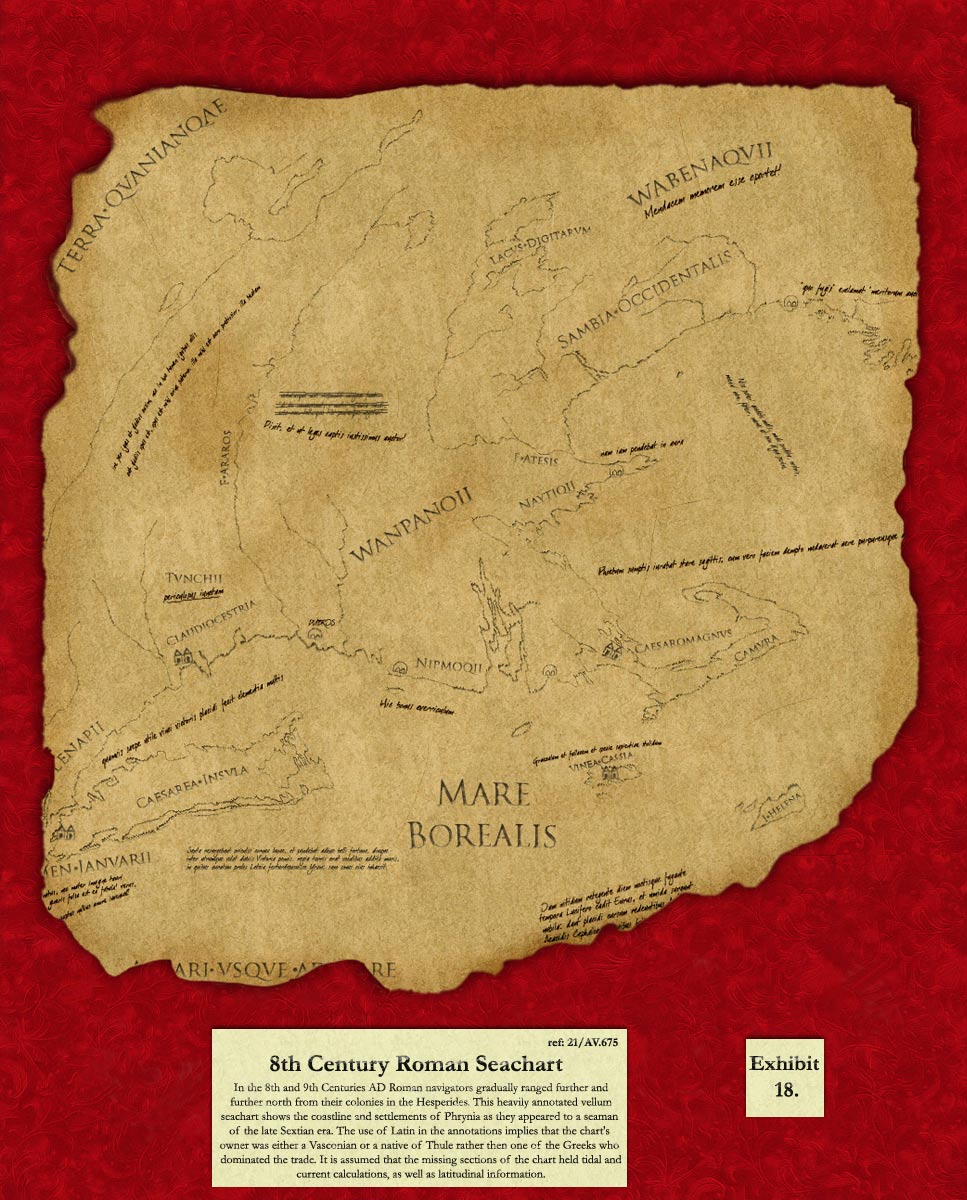 An effort by TheLoneAmigo, where Peron goes Allied and butterflies go crazy...

From Imperator, a map where Austria surrendered earlier in WWI and things have gone a bit differently in the runup to the second...

From Scarecrow, a map where mercantile republics hang on in South Italy as well as in the north. 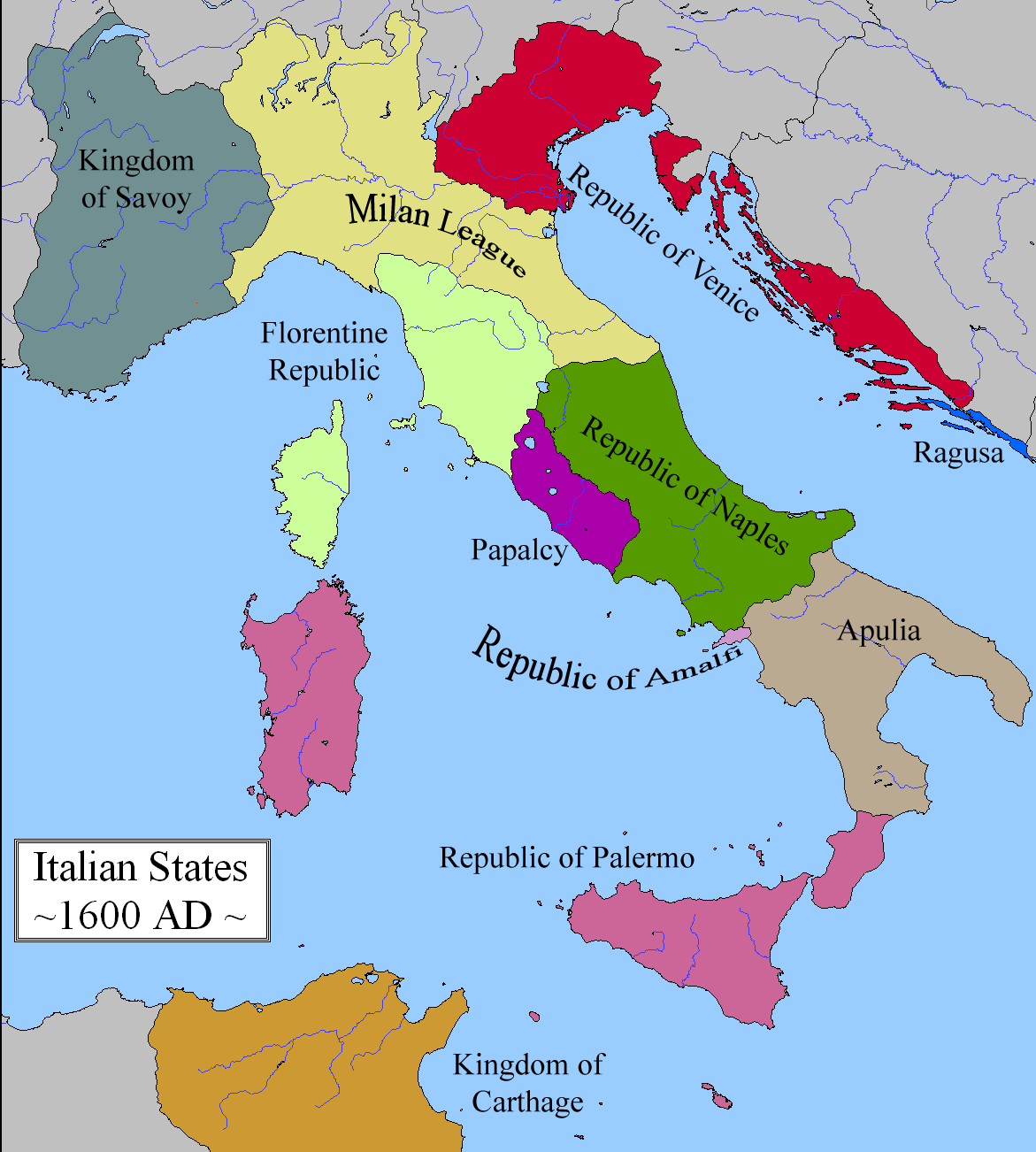 A Thande map with an Arab perspective...

A Magnificate map that makes me wanna redo it... 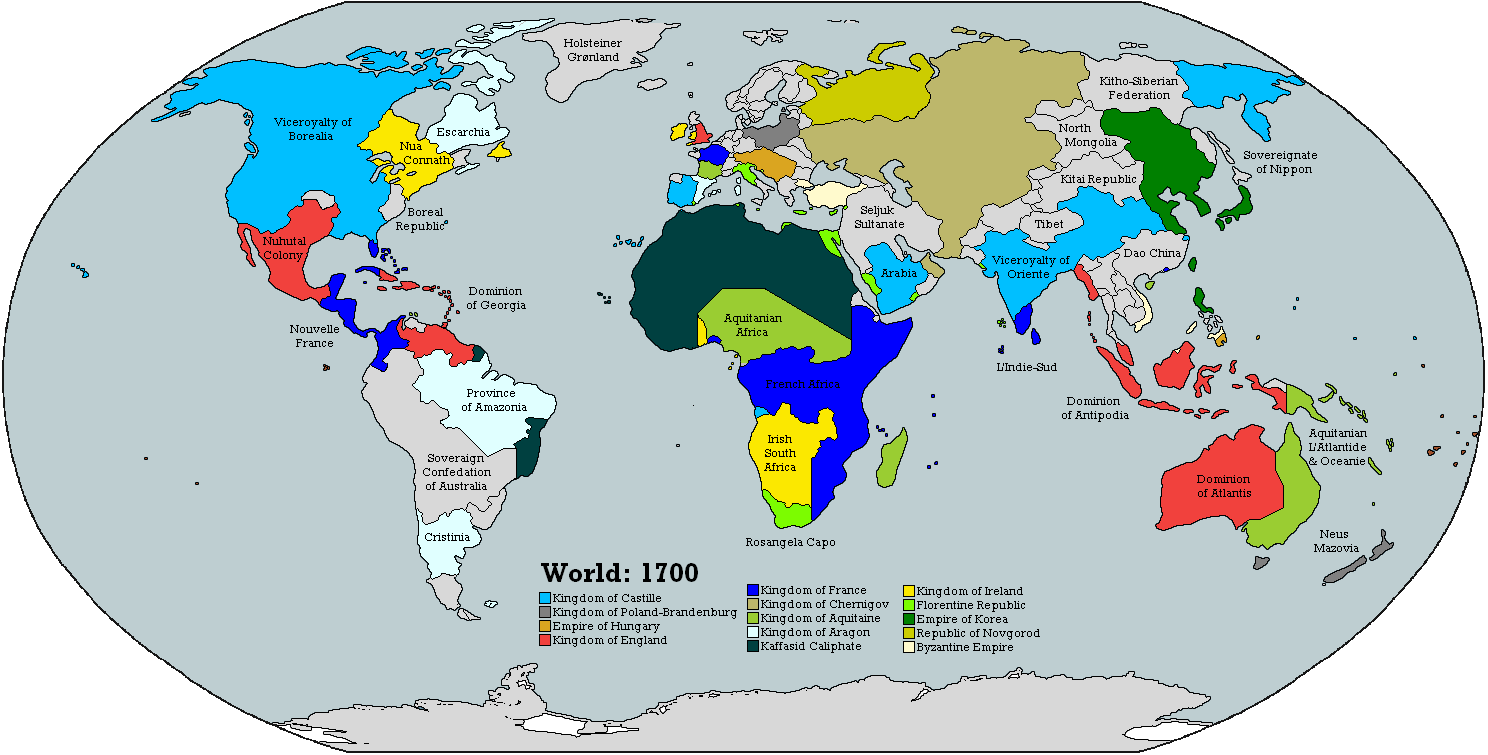 And here is what Doeth considers an _Inca_ perspective.

(Imajin won that one, BTW)

Ok, round IV, where five *Roman successor states must stand - first, Imajin. And I think I better post the description with this one...

"The Moon, 1950 Anno Domini (though no one really uses that timeline)

The POD is Antony managing to hold onto a substantial dominion in the East, which eventually becomes the Egyptian Empire. The Moon is colonized by seven powers, six of which are Roman successors: the Western Roman Empire, the Hispanic-Occedentalianic Empire (Hispania discovers the new world, rules nearly all of it and is a superpower), the Nicene Republic (formerly the Eastern Roman Empire), the Northern Roman Empire (King Arthur and all that), and Vlachia (the smallest of the bunch). The Grand Khanate has several research stations on the far side, as does the Western Roman Empire." 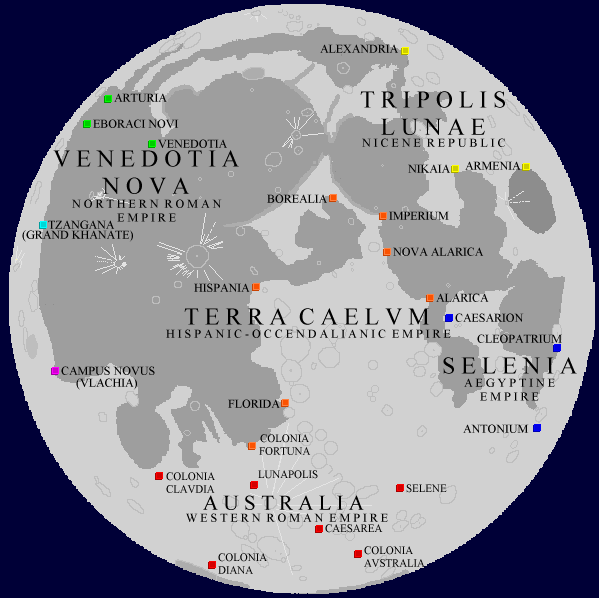 5 Roman successor states that think of themselves as Romans (or xxx-Roman like the Greco-Roman Byzantines?) okay…

The POD is the survival of the Western Roman Empire, possibly under a Goth as the Emperor. Both Empires are Christian. Islam’s spread in the west is kept in check by the Byzantines, who manage to keep a hold of their possessions in Africa and Southern Spain.

As is the way with these sorts of timelines, things progress faster, such as the discovery and exploitation of the Americas.

Both West and East carve out lands in the Americas, fighting the natives and each other in the process. By the middle of the 14th Century, the West is victorious, having pushed the Byzantines out of most of the Borealis; their few remaining possessions are a few fortress islands, the trading port of New Constantine, and the penal colony on the eastern coast of Australis where Turks are being resettled.

In 1337 AD, this all falls apart with the arrival of the plague in Europe and the beginning of the Great Plague. When the Western Emperor dies, either due to the plague or overdose of steel, General Maximus Flavius seizes power, and the Western Empire descends into Civil War. The Emperors son Alexander is in the West Roman colony of Mexico, and when news of the chaos reaches the New World, he has himself crowned Emperor of Rome Outer-Mare, Rome across the Sea. The colonies of Maiya and Mosquitos join Mexico as parts of Rome Outer-Mare, and Emperor Alexander invites the other Western colonies to join the ‘true Roman Empire’.

The Northern colonies don’t join Rome Outer-Mare, instead the mainland colonies form Nova Aquitana, a state independent of both West and Outer-Mare Rome.

Ionia Outer-Mare (its name betraying its Byzantine heritage) remains loyal to Western Rome, as does Thule (The Northmen outpost in the New World under Western protectorate) and Nova Tuscany.

The other Western Roman colonies rebel. Nova Britannia declares her independence, as does the island of Nova Amorica.

Nova Amorica had been the heartland of Western Roman presence in the New World, the oldest colony, having been settled for four hundred years. When news of the death of the Emperor reached them, they chose a different course. Established primarily as a independent republic under the current governor, that regime is overthrown, and replaced with the Republic government. The idea behind the Republic is thus: The Republic is the original Roman form of government, one that has been destroyed by the rule of Emperors for over a thousand years. They are the true Romans.

The Byzantine holdings in the New World on the other hand are rather stable. The only one that slips out of Byzantines orbit is the Turkish penal colony, where Turks overthrew the minor garrison and declared themselves the Emirate of Arslan.

So what do we have here?

How many Roman successor states? 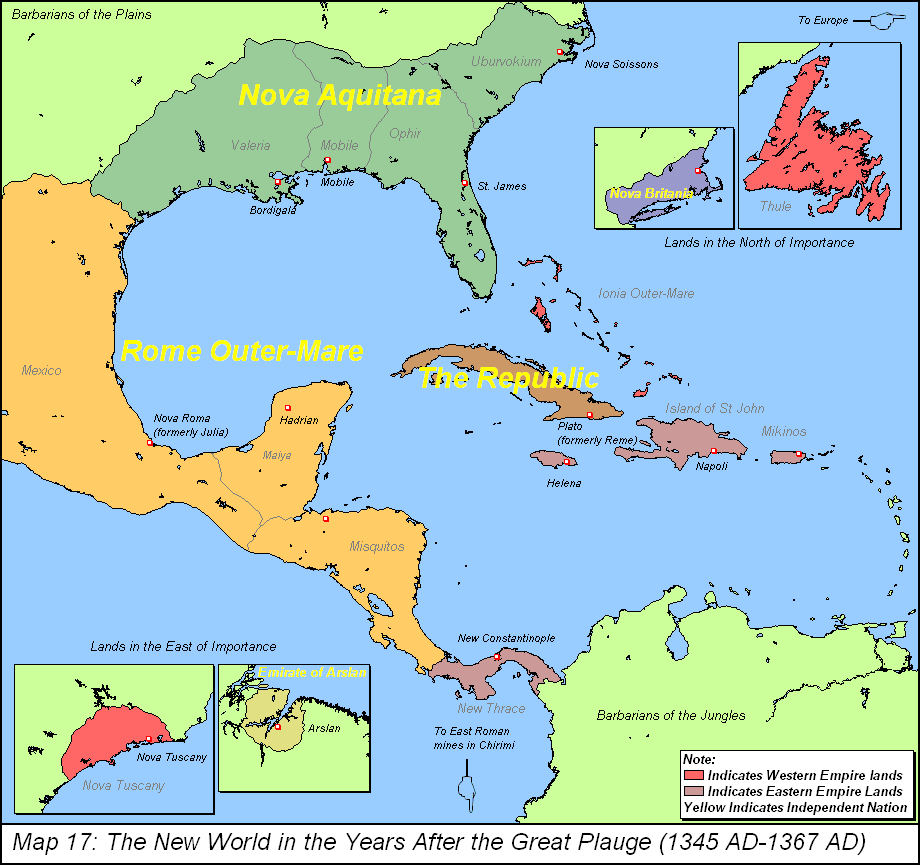 The five successor states to Rome:

I. The HRE, run by the Pope.
Client States: Carthage, See of Segaterica, Roman Gaul, Kingdom of Burgundy
II. Dalmatia; being run over by the Slavs
III. The Byzantines, run by Heraclius, battling the Persians
IV. Britain, who (theoretically) rule over TTL's England/OTL Denmark, Duchy of Normandy, Kingdom of France, Hibernia, Frisia
V. Kingdom(s) of Spain

All the pink areas are either unsettled or otherwise occupied. 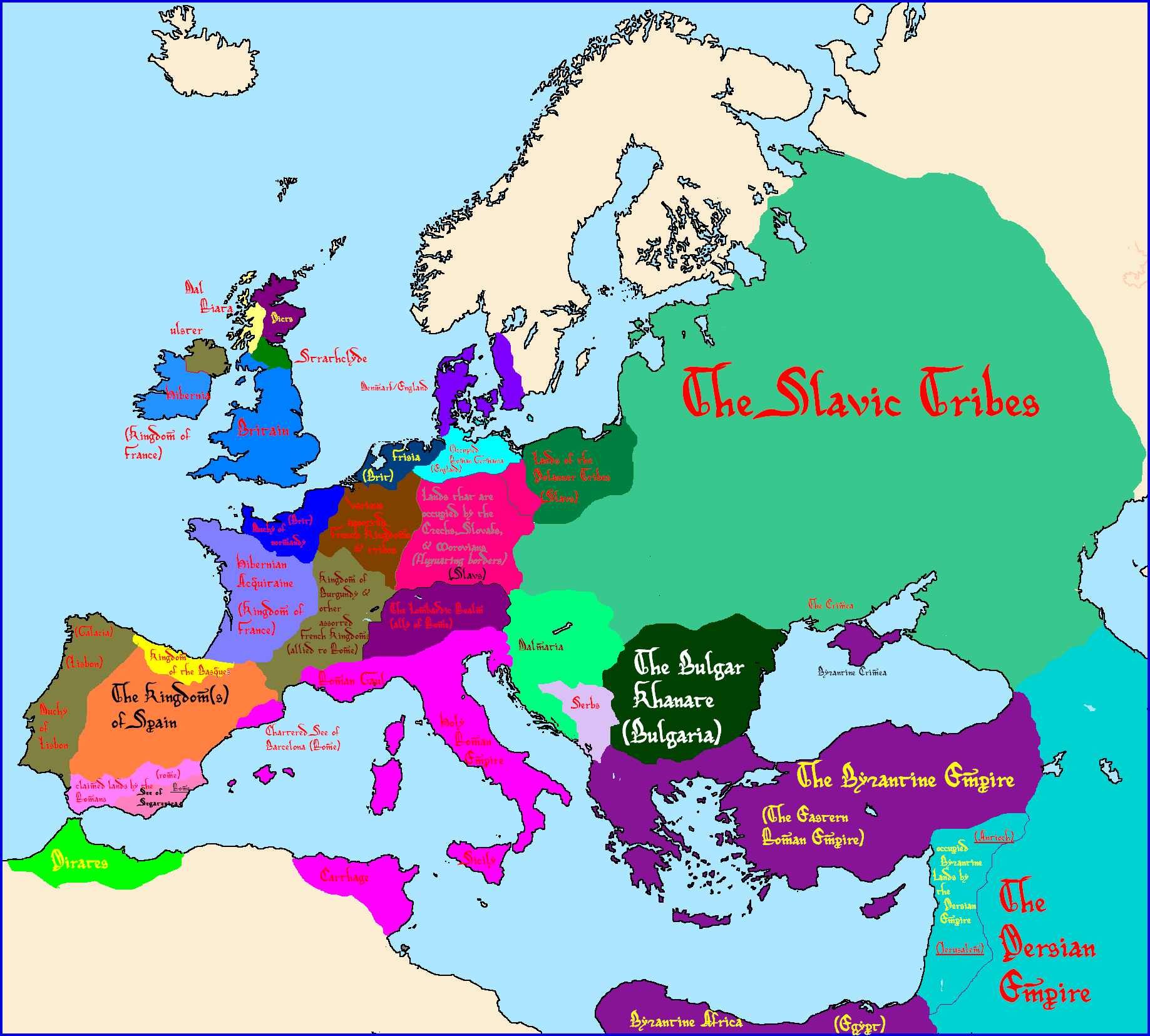 Everything prefixed with 'Imperivm' claims to be the true heir to the Roman Empire, which in TTL survived the upheavals of OTL that destroyed it, but was eventually shattered by a larger and earlier Mongol invasion. The 'Imperivm Orientalis' is actually the westernmost successor state to that Mongol empire, now itself a claimant to the Roman legacy, having 'got civilisation', and holding Rome, albeit tenuously.

In America, the Imperivm Occidentalis is a series of former Britannic colonies that rebelled, while both Britannia and Lusitania retain loyal colonies there as well. The rest of North America is dominated by a Mexican Indian (not Aztec as such) state.

Lusitania and Britannia have foederatii, the Berbers for the former and the English and Irish for the latter.

The Caliphate of Rum is the only Muslim state which also claims to be the rightful successor to the Roman Empire.

All in all, there are seven Roman successor states: 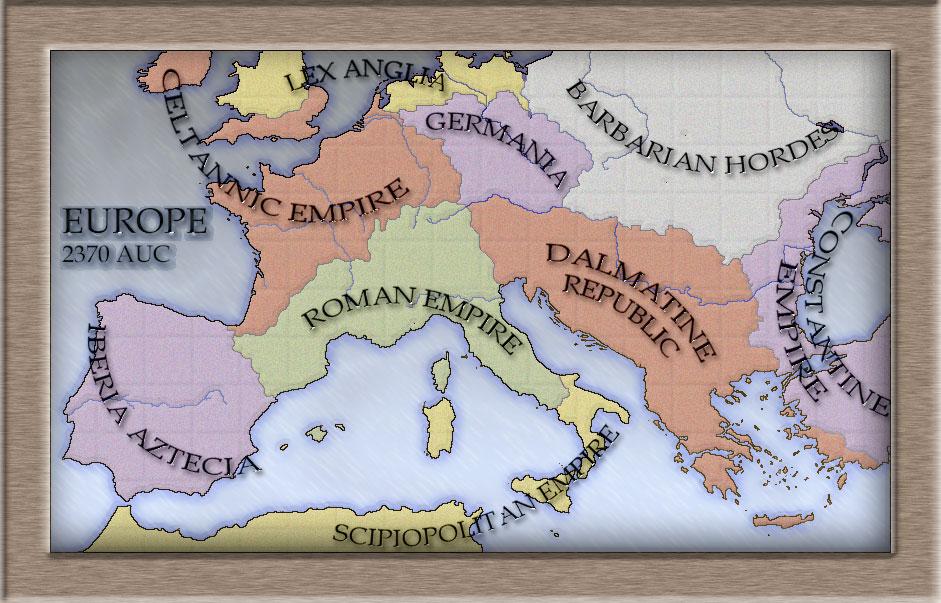 Roman troops win the Battle of the Teutoburg Forest and manage to somewhat pacify Germania. The Roman Empire still collapses, but butterflies result in a much different Great Migration. Now it is the late 7th century and the armies of Islam seek to expand.

Four states call themselves the Roman Empire, but they are more commonly known as Italy, Byzantium, Libya, and Aquitaine

And Othniel, which I'm just putting up because I like the bricks.


Its the Late 1500s and Rome has already discovered the Americas. Working with local allies the Aztecs were overtrown and their regional rivals of the Tarascans and Mayans have overcome the plauges of the old world. Early in the Roman reign they got rid of many of the Germans invading their region by agreeing to give them lands in the New World. Later the Romans lost control of them. Meanwhile the Eastern part of the Empire fell to the Bulgarians, who absorbed the Greco-Roman Culture. Likewise Egyt has broken off.

As you can see Scotland, Norththurbia (possesion Denmark) and Vandal's Brittannia are devolping as their own cultures, sperate from the continet. This is causing them to spread.

The picture we see now is of the mid-1800s the German Duchies to the north of the Roman Empire. Europe is devolping like India would have without colonization. China likewise has problems with speration, spuring them out of isolationist thought. India and Europe are both dominated by large empires with a few smaller states. Diplomacy is dominated by force rather than by skill of words. Of the German Duchies though Francia, in the East believes itself to be a sucessor to Rome and may show a Charlamange like resurgence soon. The Roman Colonies in the new World have gathered themselves more and more automony in themselves as time goes forward.