BrobDingnag said:
>giving China a portion that isn’t coterminous with its existing border

took me a while to figure this out but i *think* it was because manchuria was under communist control, so two communist held regions in the north (if the KMT were given it it wouldve been overrun almost immediately) would be a no go

I seem to recall that as well, and think it was at roughly the same time as the U.S. took a vague interest in the area.

I'm not sure about Austria, but I actually have a vague recollection of an American North Borneo company

CountofDooku said:
I fear that the breakup of multi-nation states, weather the former Colonial or other Empires, from Britain, to France and Austria-Hungary, or the Russian Empire/ Soviet Union, Yugoslavia has cemented the idea in the eyes of many that such multi-ethnic, multi-religious and multi-cultural states hardly work out unified and peaceful in the long term, especial trough their modern eyes of more recent examles, as long as there is no common culture, religion and over time even major ethnic group emerging to have the common goal of holding it together instead of creating/ having their own nation state. I even had a history professor once who argued China and other major places like even to a extent India and Indonesia is only unified because it is not a democracy (or at least not a true one) because of such theories and that only centralised enforcing of unity is what keeps these places truely together by soft and hard power alike (this was also the same nutjob who explained to us how to get rid of dead bodies out of the blue and constantly told us how his marriage was going so ...).

While I disagree with that, especialy as I belive even a unified earth can be possible, as long as we learn how to better work together for a common goal and the best interest of our species as a whole, seeing how long the Roman Empire, Carthague and others like them have existed and survived beside all that, I can see where some of these assumptions are coming from, especialy in people wo are less interested in more then the little history they have briefly learned at school, or trough simplified mass media documentations, who often skip very important parts or whole periods, even if they are good for creating a overallgeneral interest and fascination with history for many.


The smallest nations on this world would like to disagree, sure you might need a very specialised local industry, tourism or even a tax paradise to make it work well for everyone inside, but size is and was never a limitation for a coutnry/ nation, not since ancient city-states.
Click to expand...

CountofDooku said:
The smallest nations on this world would like to disagree, sure you might need a very specialised local industry, tourism or even a tax paradise to make it work well for everyone inside, but size is and was never a limitation for a coutnry/ nation, not since ancient city-states.
Click to expand...

In very stable parts of the world, this is quite true... I have a little bit of difficulty believing a Yezidi mini-state here would become another Liechtenstein or Andorra though....

Crazy Boris said:
I'm not sure about Austria, but I actually have a vague recollection of an American North Borneo company
Click to expand...

One of the businessmen who took over the American Trading Company of Borneo was a German businessman and diplomat named Gustav Overbeck, Austria's consul in Hong Kong. He then tried to sell his concessions in the 1870s to various European powers, including Austria-Hungary, Germany, and Italy, yes.

However I didn't include it in my original post because I wrongly remembered it being the English-language article on Austrian colonial policy over on Wikipedia, and the article I was referencing either doesn't mention it or includes it as a passing mention, I can't remember exactly and am too lazy to look it up. 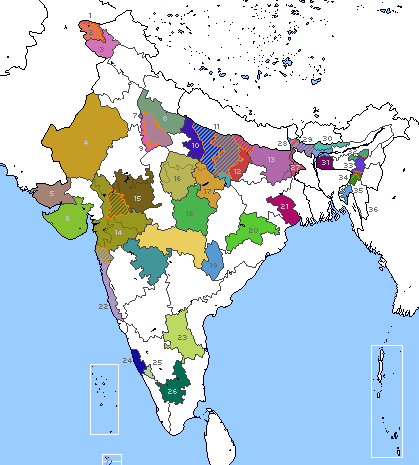 Many proposed states of India.


Not numbered: Marathwada, Vidarbha
Not numbered or colored: Karu Nadu
Click to expand...

Great map, though you mistakenly put North Karnataka as an existing state rather than a proposed one

So, the supercontinent Gondwana was named after a region of India? You learn something every day... 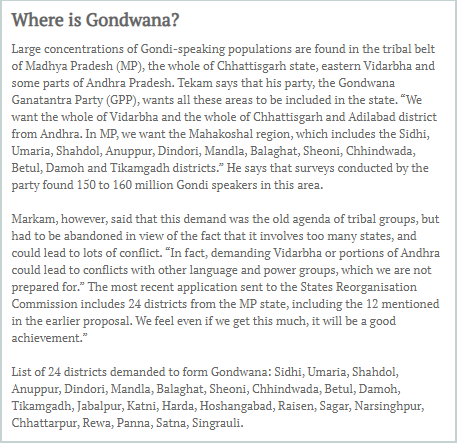 Really 150-160? Million. While I don't double Gonds are underepresented that number is absurd

Impossible_Quail_250 said:
Really 150-160? Million. While I don't doubt Gonds are underrepresented that number is absurd
Click to expand...

I mean, the GGP themselves did the calculations not the government, so I assume that estimate is on the more biased side.

James the AH Fan said:
I mean, the GGP themselves did the calculations not the government, so I assume that estimate is on the more biased side.
Click to expand...

But they can't expect people to belive a tenth of the population are Gonds?

Impossible_Quail_250 said:
But they can't expect people to belive a tenth of the population are Gonds?
Click to expand...

Okay, from a simple Google search, looks like that 150M estimate is a complete fabrication
"Unlike the caste populations in India, there are very few tribes with total population sizes ranging in millions. Among all the central Indian tribes, Gond is the most populous tribe and has a well-defined clan structure. With a population size of over 12 million, they are mainly found in eastern central India." (Nature)

James the AH Fan said:
(From DownToEarth)
Click to expand...

I only included the parts of Chhatisgarh that would comprise a reasonable Gondi state, as I couldn't find the rest. 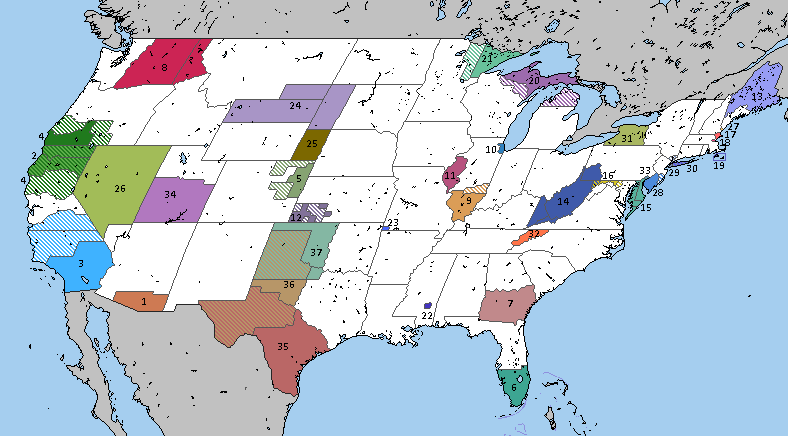 During the late 1940s and the early 1950s, there were serious negotations going on about the future of the former German colony of Togoland, at the time administerd as two trust territories by the UK and France. In particular the Ewe people, who formed the majority in the southern parts of both British and French Togoland, were strong advocates for the reunification of Togoland. Several petitions were made, mostly from the southern section of British Togoland (pictured above), though some were also filed from the northern section and French Togoland.

According to "The Internationalization of Colonialism: Britain, France, and Black Africa 1939-1956 " by John Kent, in 1951 several Togolese advocacy groups, mostly Ewe, were hosting a conference at the town of Kpalimé in French Togoland to declare their wishes to the UN that the halves of Togoland were to be united into a unified mandate, controlled by the UN itself, with a clear schedule towards decolonization in five years, which would also involve a new referendum on the various parts of Togoland determining whether they wish to join any neighboring states or be part of a unified Togoland.

Meanwhile a concurrent international factfinding mission had its own proposals for the Togoland question. American diplomat Benjamin Gerig suggested that the Gold Coast Colony should be united with both the French and British controlled areas inhabited by the Ewe people. While he is not reported to have said anything about what would happen with the two northern halves, there would be, in my opinion, three reasonable options: a landlocked unified North Togoland, a partition of northern Togoland between Ghana and Benin/Dahomey, and a replication of OTL (independent northern French Togo and northern British Togoland becomes also part of Ghana or a northern state in Ghana).

The main Iraqi diplomat of that mission, Awni Al-Khalidi, instead suggested that French Togoland also be put under British mandate, with future plebiscites determining the exact future of these territories. Britain was reportedly strongly opposed to this idea.

When ultimately in 1956 a plesbicite was held in British Togoland on the question of whether British Togoland were to be integrated into the future country of Ghana, which became Britain's preferred solution, the results were as follows:

EDIT: I changed the wording a bit, mostly in regards to the uncertainty about northern British Togoland in the Gerig proposal, and I also wanted to mention that the 1956 map from The Times Atlas of the World seems to indicate that the border of northern and southern British Togoland has been shifted northwards compared to the recreation of the 1925 situation shown above. Northern Togoland in 1956 seems to have its border roughly equivalent to the border between the Northern Territories and Ashanti, rather than the border between the Gold Coast Colony and Ashanti (though it also indicates the old border).
Last edited: Nov 6, 2022

While the creation of this Indian state isn't out of the question, it's likely not going to be so large. More realistically, Bhil Pradesh would be made up of territorially contiguous districts, each formerly part of Rajasthan, Gujarat, Madhya Pradesh and Maharashtra, with a majority tribal population.

Indeed. While I didn't mention it in the post, though I did consider doing so in my addendum, is that it might prevent or significantly delay the construction of the Akosombo Dam and thus the creation of Lake Volta... Which would have a few interesting influences on Ghana (and Togo, which also gains most of its electricity through it nowadays).
You must log in or register to reply here.
Top
Share:
Share
Top