oshron said:
why do all these UFAR/Eastasia/Chinese Federation/SDC maps all look about the same?
Click to expand...

This particular map involves taking over the Asian parts of Russia, which are relatively sparsely populated and resource rich. It would seem like the logical areas of conquest for the Chinese.

Aghasverov said:
Even then though, the lines weren't completely clear, especially in urban areas like Samarkand and Kokand (and, judging from the map, Bukhara)... from what I've read, in the cities the Turkic dialects were under heavier Persian influence, than in the nomadic/semi-nomadic tribes on the steppes... where one ended and the other began was sort of a term of art
In the Russian Empire, the epithet "Sart" (now maybe considered derogatory) was used for town-dwellers, while in rural areas Khirgiz, Khazakh, or Turkmen were assigned as appropriate... but the lines between them were a bit blurry....
Click to expand...

Have you read the book "Making Uzbekistan" by Adeeb Khalid? Has a lot of super-interesting information on this exact topic.

Hrvatskiwi said:
Have you read the book "Making Uzbekistan" by Adeeb Khalid? Has a lot of super-interesting information on this exact topic.
Click to expand...

No I haven't, but it sounds like an interesting read... I did read of at least one case where the Soviets tried to "standardize" a certain dialect to encourage literacy, but picked one spoken by the more geographically dispersed nomadic population. They tried to introduce it in the cities, no one could understand it.... so, it was "back to the drawing board"

A plan drafted around 1902-1906 for various attempted protectorates over the poorly controlled south western Madagascar, the protectorates had larger native autonomy under various chiefs:

Gallieni, famous conqueror of Madagascar and governor at the time supported this idea, but the idea floundered on various causes: The betrayal of some of the supported native leaders, notably chief Befitory of the Tanosy and the chief of the Vezo & Mazikoro, Tomafana who supported the insurgent in the 1904 south-eastern madagascar uprising, cost saving were also limited since the protectorates kept some of the french administrative structure and personel, Finally the successor of Gallieni, Victor Augagneur was a staunch centralist of the jacobinist tradition.
The Mahafaly were the last disestablished protectorates in 1906 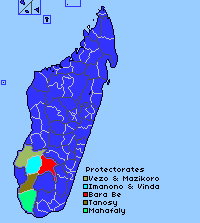 Another proposal from the time of the conquest of Madagascar.

This one was from a large study comissioned by the Chief of Staff of the French army and the Minister of War in February 1894, a bit over half a year before the declaration of war with the Merina kingdom, it wasn't strictly official policy but was representative of the thought of the time in the army and colonial sector.

After summing up the situation in madagascar, it comes to some conclusions and interesting proposal for a treaty to the Queen Ranavalona III,
It refused both a protectorate over madagascar and a complete annexation of it:

"Annexation would impose financial burdens far in excess of the results to be expected. Although more economical, the first consequence of an effective protectorate would be to oblige the French forces, after their victory, to further impose the domination of the Hova queen throughout the island - whereas, according to the authors, her suzerainty is only really accepted in a third of the country. In sum, it would now be necessary to support the government of Tananarive, which was fundamentally and insidiously hostile to the French in a probably lasting way, against non-Merina populations which were rather friends of France and would in turn become hostile. It is therefore better to subdivide Madagascar into several zones that are practically independent of each other, including the Hova kingdom, a feudal state of France among others, reduced to the Imerina and the Betsileo. The treaty putting an end to hostilities should be signed with this kingdom alone. In the other regions, there is no hurry: for the time being, it would be sufficient to place a few military commands there, in charge of eventual pacification and taking the place of the Merina governors when there are any. Then, one could reconstitute, for example, the old large peripheral political units such as the Sakalava kingdom. At the head of the country, a resident general, whose function would be analogous to that of the Viceroy of India, would maintain with the various peoples of Madagascar relations of a variable nature, adapted to their needs"

The details of the treaty
-France would assume immediate protectorate status over the whole island
-Ranavalona III keeps her power, title and direct administration in a polygone made of the towns of malatsy, Vohilena, Amparafaravola, Beparasy, Ivohitrambo, Alakamisy, Vohibo, Midongy, Tsiraomandidy and Tampomanandrarina with an eventual ajustment to follow natural borders
-The merina army would be dissolved and would be replaced by an indigenous force of 8,000 men, of which 2,000 would be in the gendarmerie and 1,000 in the customs
-France would manage foreign relations of the Merina both with external powers and with other nations of Madagascar
-A constitution would be written for the kingdom, and freedom of religion for Christians, Jews and Muslims will be guaranteed

Anyway here's a map of it based on this treaty proposal:

Green dots are the border cities mentionned above, blue are three cities (Fianarantsoa, Vohilena and Ambohidratimo) where the french would keep a directly administered garrison.

I wasn't quite sure of the location of one of the border cities (Vohibo) so here's a more conservative QBAM version, along with WorldAs

Also here's something I quickly made based on the two previous post, along with a few papers on Gallieni's indirect rules attempts, the aforementioned paper, and a few others

The Sakalava protectorates were mentionned in the pdf I linked above, IRL it was quickly attempted in the center of the Menabe (up to the tsiribibina river basin)... however it was attempted After the french brutally massacred the Menabe king Toera and the whole of the local elite who had just surrendered, they put the claimant and former king Inguerezza on the throne, but all authority of the kingdom had collapsed, particularly in the inland Betsirisy, there was a second planned protectorate in northern menabe around the manambolo river but it was never established.
Contrary to the menabe the Boina was always supposed to be directly administered. The south-east was also judged too diverse by Lyautey (who drafted the inland protectorates in the above post) and needed to be directly administered. There were also recommandtion to enlarge the Bara protectorate.
Finally the Antankara (in yellow) kingdom were allied with the french for decades, even signing a mostly meaningless protectorate treaty in 1841 with the French in reunion (but Merina power projection was too strong at the time) they helped the french in the 83-85 first was and sided with them again a decade later, I didnt' see mention of it but it seems they could be put under the regime of a protectorate

not sure why these images aren't working. I'll fix it in the morning.

From René Pelissier's "Spanish Africa - Afrique Espagnole. Études sur la fin d'un Empire", based on his "Los territorios españoles de Africa", 1964, couldn't find another reference but I believe the author since all his works are extremely serious and well documented
The foreign ministry of spain under Fernando María Castiella's, in the mid 60s, considered giving Ifni to an arab league administration

Ifni was just a small military outpost/city state that the Spaniards didn’t even try to leave the outskirts of the town despite claiming thousands of km2 which were controlled by the Moroccan by the 60s It just was some forgettable fiefdom of the generously paid oversea army which lived of subsidies, small trade with locals and was useful as a store front of Europe to local tribes and as a negociation asset with Morocco My understanding is that it was a proposal by the foreign minister who wanted to 1) kinda get rid of it quickly while being well seen internationally and 2) as part of a rivalry between the foreign ministry and the army and particularly as part of a personal rivalry between Fernando Castiella and Carrero Blanco who he had . Doubt it could have happened especially with Morocco's desire to annex it.

From ANGOLA 20 ANS DE GUERRE CIVILE" by Dia Kassembe, was dubious until i found a NYT article from ~September 11 1979 mentionning it

Apparently in 1978, 3 years after independence from Portugal and in the middle of the civil war with the western-backed UNITA, Agostinho Neto, first ,communist, MPLA President of Angola went to Europe to ask for a joint Portuguese-French military Force in Angola to replace the 20,000 strong Cuban one

It was as part of a "change of heart” around the time, he wanted to weaken Cuban and soviet influence which had become overbearing since 1975. He signed a non agression pact with Mobutu and made a speech in Malanje welcoming back FNLA members who had been in exile since 1976. Then in September 1979 in a trip to Moscow he died of a well-hidden cancer.

Another source I could find in the NYT mentions a french counter-proposal to instead have a joint comission/force made up of Portugal, France and two eastern block countries to replace the cuban one. It seems that the european countries feared such an obvious move would result in a coup against Neto and further growth of cuban presence, which wasn't too far from what happened.

Still fun, Portuguese forces had left not 3 years before, imagine if Ho Chi Minh had asked for French and American troops to come in north vietnam in 1955 to check back the PRC's influence, that's of the same caliber lol
Last edited: Nov 20, 2021

In no particular order:

Blair said:
In no particular order:

In 1793, Catherine II inherited the German city of Jever and the Russian Empire used it as a warm water port. Napoleon later annexed it.
Click to expand...

North Korea tried to kill President-elect Eisenhower during his visit to South Korea. President Richard Nixon would likely continue the war in this case.
Click to expand...

I wonder if MacArthur would have gotten the go-ahead to use nukes TTL...
Last edited: Friday at 6:03 PM

I wonder if MacArthur would have gotten the go-ahead to use nukes TTL...
Click to expand...

If I'm not mistaken, Jever went back to Russia at the CoV... but, for whatever reason, Alex I turned it over to Oldenburg a year later...

Aghasverov said:
If I'm not mistaken, Jever went back to Russia at the CoV... but, for whatever reason, Alex I turned it over to Oldenburg a year later...
Click to expand...

Probably because of familial ties. The younger brother of the Duke of Oldenburg was married to the sister of Alexander I.

Blair said:
Probably because of familial ties. The younger brother of the Duke of Oldenburg was married to the sister of Alexander I.
Click to expand...

Still, could've been interesting later on in the century if he had stubbornly held onto it....

https://assets4.bigthink.com/system/tinymce_assets/6205/original/radial_europe_big_map.jpg?1502122538
has anyone ever done a worlda / qbam for this?

Library of Alexandria said:
https://assets4.bigthink.com/system/tinymce_assets/6205/original/radial_europe_big_map.jpg?1502122538
has anyone ever done a worlda / qbam for this?
Click to expand...

I believe that map may be the textbook definition of "insanity"

The Glass Age by Silas-Coldwine on DeviantArt

Blair said:
In no particular order: