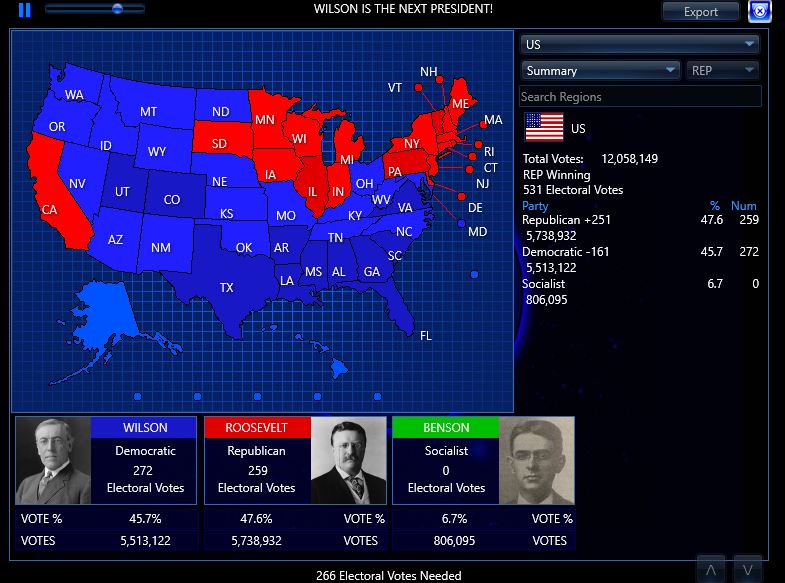 The US Presidential election of 1916:

While President Wilson was easily nominated once more, former President Roosevelt had gladly accepted a draft during a dead-locked convention and threw himself into the ring. The vice presidential nomination had been offered to Roosevelt's 1912 running mate Senator Johnson, however he had refused and faced opposition from conservative republicans anyway and so Roosevelt's "opponent" and former representative Theodore Burton was chosen.

The election was extremely close with Roosevelt and Wilson constantly jumping up and down in the polls. Wilson attacked Roosevelt on his cries for intervening in the war while Roosevelt slammed Wilson leaving the nation unprepared and allowing German submarines to target American ships without a counter. Unfortunately for Roosevelt, the former president began experiencing heart issues and exhaustion (no doubt from related to his South American illness and injuries exacerbated by his hard campaigning) and was briefly hospitalized. Hearst newspaper reporters/ "muckrakers" uncovered this face and the revelations were leaked, causing concern in the public over Roosevelt's health.

With all the trouble aside, the election was closer than anticipated: Wilson took a majority of the electoral vote while Roosevelt narrowly won a majority of the popular vote. There were some substantiated reports of voter fraud and intimidation in many states, including: West Virginia, Missouri, and Ohio. Both parties denied accusations and many historians would point to two of Ohio's most popular politicians as factors. Former Governor Jim Cox (D) had vigorously campaigned for Wilson while also winning reelection to the Governor's mansion; while Senator Warren Harding (R) made a spectacle of himself after becoming ill due to alcohol poisoning. 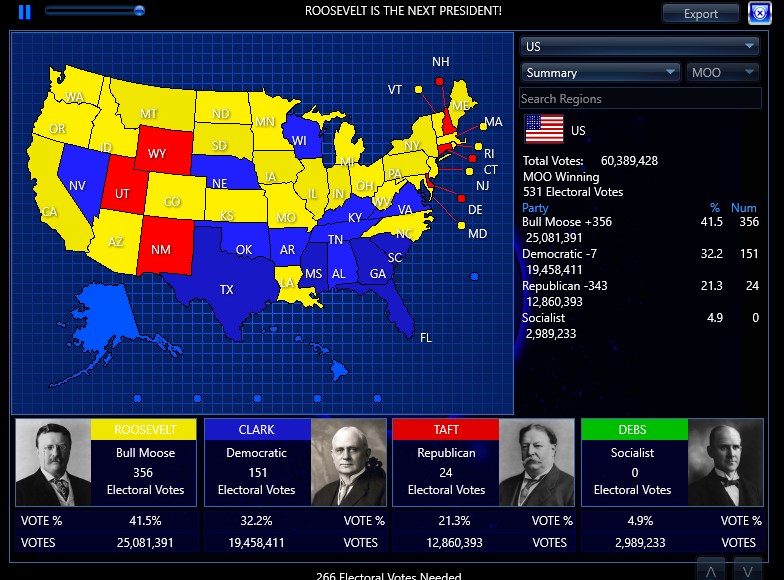 Not related to above, but after a little over two days, constant saves, and frustration...here it is.

I played as TR in the Republican primaries and as Bull Moose TR. Eventually TR A lost against Taft and endorsed TR Bull Moose and I fundraised, barnstormed, and rallied to this.

Has anyone else had any trouble with the game breaking down or freezing near the end of the campaign? 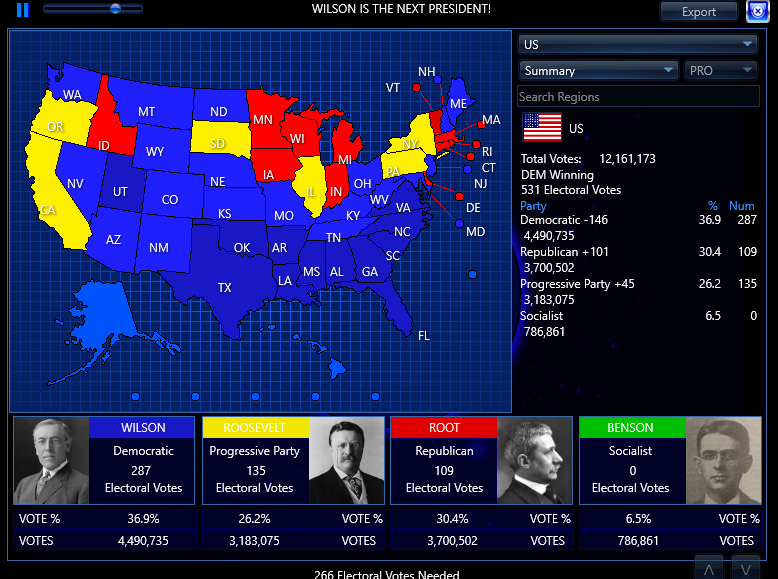 I'll freely admit there was some editing/ cheating done, but only to simulate a successful 1912 Progressive party campaign and a less than renowned third Theodore Roosevelt term. Oh and its a sequel to the last post I made here.

jack_donaghy_is_the_shado said:
I played as TR in the Republican primaries and as Bull Moose TR. Eventually TR A lost against Taft and endorsed TR Bull Moose and I fundraised, barnstormed, and rallied to this.
Click to expand...

...Who did Klobuchar choose as her running mate?

...Who did Klobuchar choose as her running mate?
Click to expand...

My alternate 1956
The greatest Upset of US Election 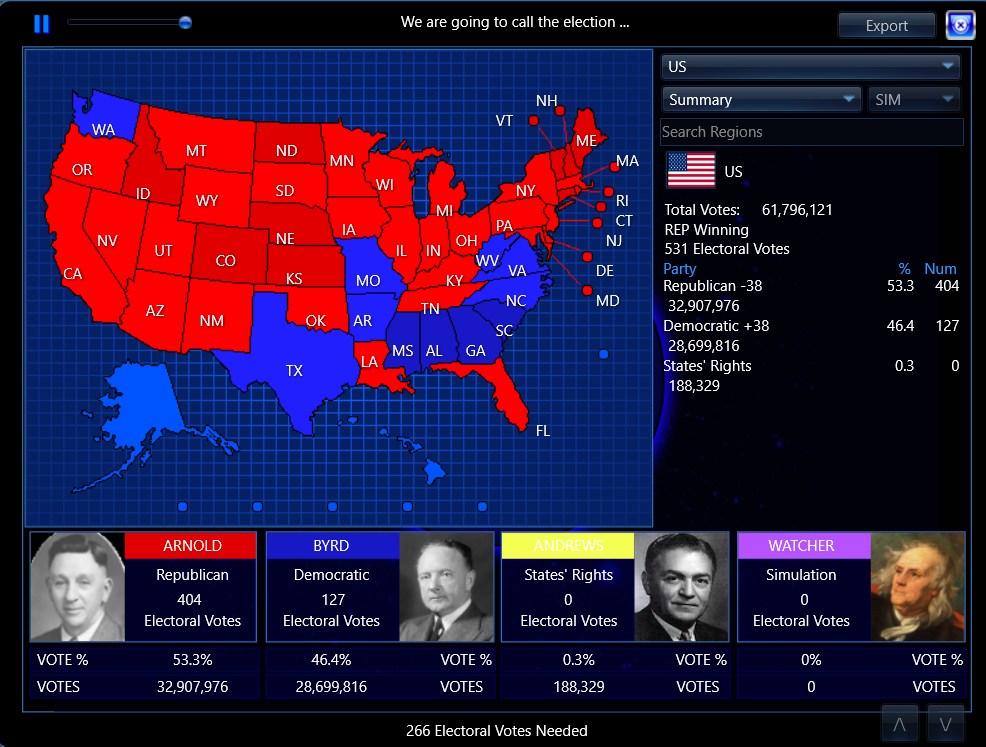 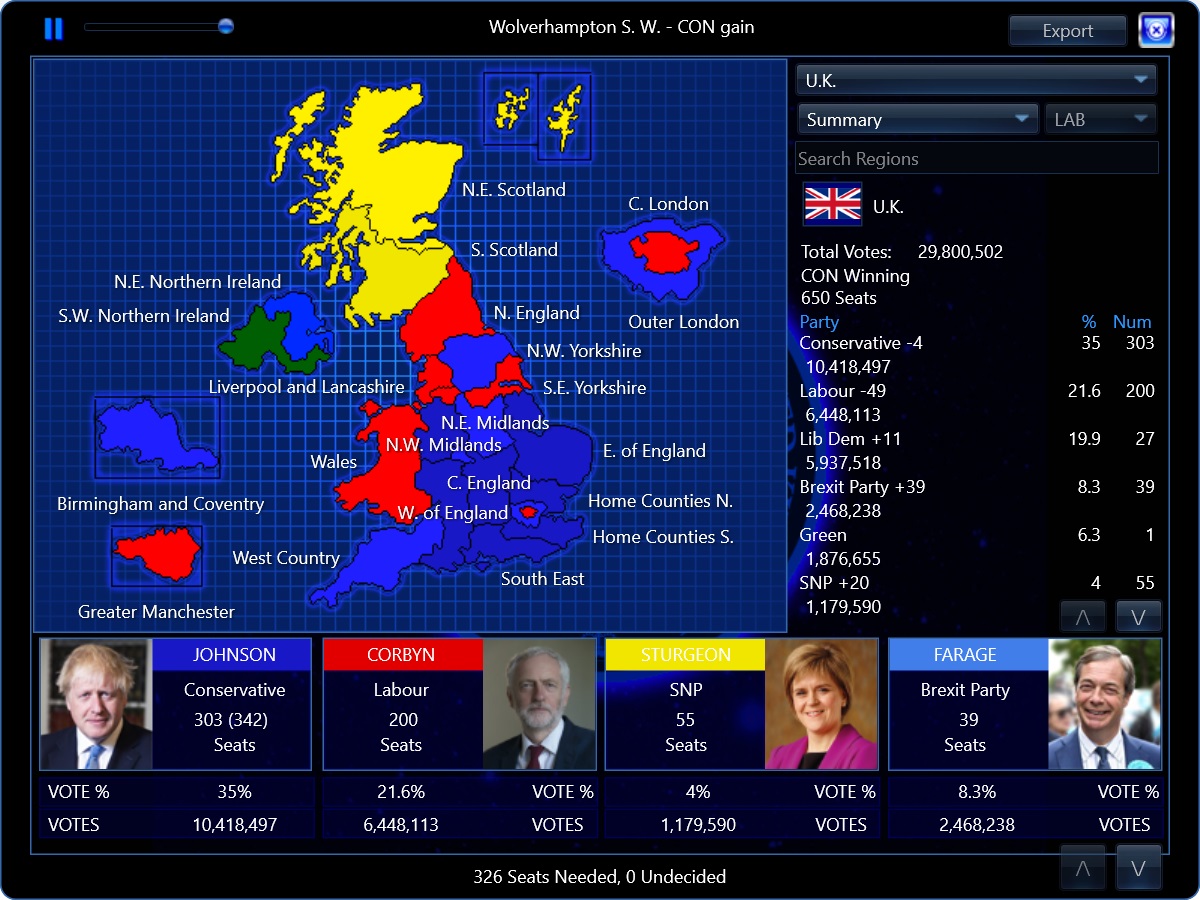 Dooming the world to a Boris-Nigel Coalition 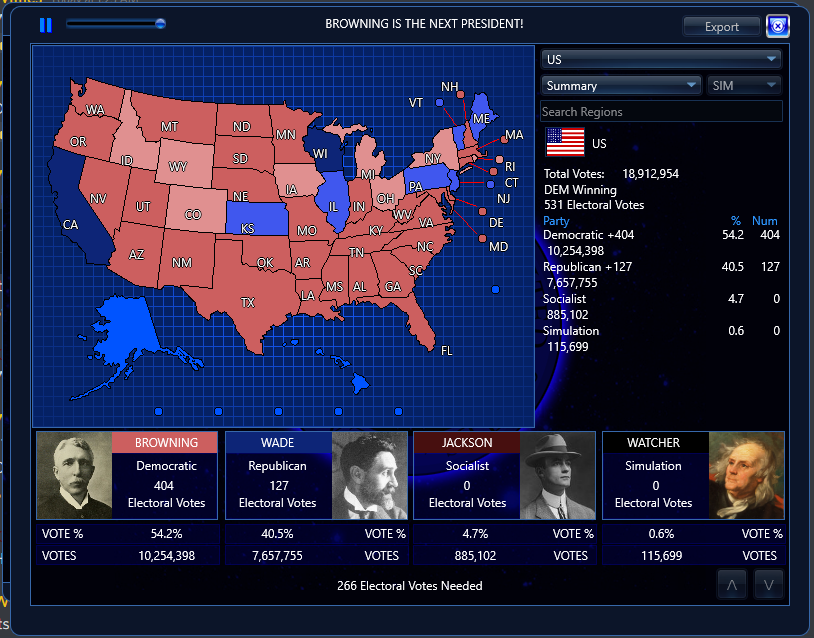 The Most Recent Election for the EG linked in my sig! 1924!

President Ronald Reagan, Speaker of the House of Representatives Tip O'Neil, and others featured as the president makes his way to the capitol rotunda for his "second" inauguration. Due to below freezing temperatures outside, the ceremony was moved in doors for that day.

The rotunda was absolutely packed with guests, with still many forced to watch the ceremony from television. For many guests, it would take some time for them to realize how truly fortunate they were...

At 12:01, there was a monstrous explosion in the rotunda, killing hundreds instantly and severely injuring more. The blast was so powerful that exhibits in the Smithsonian were found to fallen or toppled over, including the Spirit of St. Louis and the Wright Brothers Plane.

The Secret Service immediately located and locked down Margaret Heckler, the Secretary of Health and Human Services and the Designated Survivor. Almost three hours later, the fire was extinguished by nearly frostbitten firefighters whom were quickly replaced by military and federal government crime scene investigators. With little hope of finding the president alive, a nearby minister was brought to an undisclosed, secure location, and promptly swore in Margaret Heckler as the 41st President of the United States.

Members of Congress who were unable to attend the Inauguration and those survivors deemed fit for travel were immediately transported to the Greenbrier resort in West Virginia while President Heckler is put on the NEACP and the military is put on a Def-Con 3 standing.

Within a matter of days, the horrible truth emerges. The explosion was caused by a combination of a forced gas leak and a delayed timed explosive placed a nearby restroom. Forensic investigators rule out action by the Russians, but trace some of the materials to former members of the Weather Underground. A two year manhunt results in the capture of most of the plotters, including
Theodore Kaczynski, David Lane, and Don Black. To this day, there are several die hard conspiracy theorists that assert their beliefs that the Capitol assassinations were false flag operations or an Illuminati plot to stop the militia movement.

President Heckler would soon sign the Penny-Cheney act aka the “Patriot” act to root out and destroy domestic terrorism, although subsequent administrations would amend it.

Four years later, President O’Shaughnessy (the president had legally changed her name following the finalization of her divorce) narrowly defeat former Secretary Al Haig and Sen. John Anderson for the Republican nomination. To placate other wings of the party, O’Shaughnessy selected Missouri Governor John Ashcroft as her running mate and promised to reappoint Donald Rumsfeld and Al Haig to Secretary of Defense and National Security Adviser respectively. In the other corner, the Democrats nominated Chrysler CEO Lee Iacocca and San Francisco Mayor Dianne Feinstein for president and vice president.

While less heated than recent campaigns, the 1988 race still had its hot moments, with the Democrats hammering the president for not doing enough to fight the AIDS epidemic and her indecisive attitude towards détente while Republicans mauled the other side for the token and appealing to the “gays” choice of Feinstein and the nomination of a politically inexperienced businessman.

The final results were much closer than those of four years ago, but many armchair campaign managers continue debate on how it could be different.

President O’Shaughnessy was overjoyed with her success, although she could hardly foresee the drama that would erupt in her “lame duck” term…

OOC: So this was an idea I have been brewing over ever since I started season 2 of Designated Survivor. My idea was to attempt to craft a more “believable” (although I freely admit I am stretching that term) or at least less ridiculous version of the show. The public second inauguration of Ronald Reagan did happen in the Capitol rotunda due to terrible weather and Margaret Heckler nee O’Shaughnessy was indeed the Designated Survivor for that event. I would like to hear your comments, criticisms, and advice. Thank you for reading.
Last edited: May 30, 2020

Interesting, although I doubt Arkansas would go to Clinton with those margins.

Temeraire said:
Interesting, although I doubt Arkansas would go to Clinton with those margins.
Click to expand...

Hillary was actually leading in the polls in Arkansas during her 2008 run. Bush only won Arkansas by around ten points, and obviously Hillary still had some home state appeal at the time.

Huh, interesting, I actually didn't know that! Thanks for letting me know!

There might be repeats of Pat Buchanan's 1996 to run against the Republican ticket if there's a pro-choice nominee on it. If I recall, both Powell and Whitman were or are pro-choice.

Perhaps the Gore campaign may try a "game change" with Powell in the race. Perhaps Feinstein or Landrieu?

At least this may be the political end of you know who...

POD: Aaron Burr sneezes just as he pulls the trigger of his pistol and misses Hamilton. Though the two are still bitter, no one dies. Years later Burr gains the governorship of New York before being nominated as President Madison's replacement vice president. Hamilton fumes but doesn't dare to reopen old wounds... 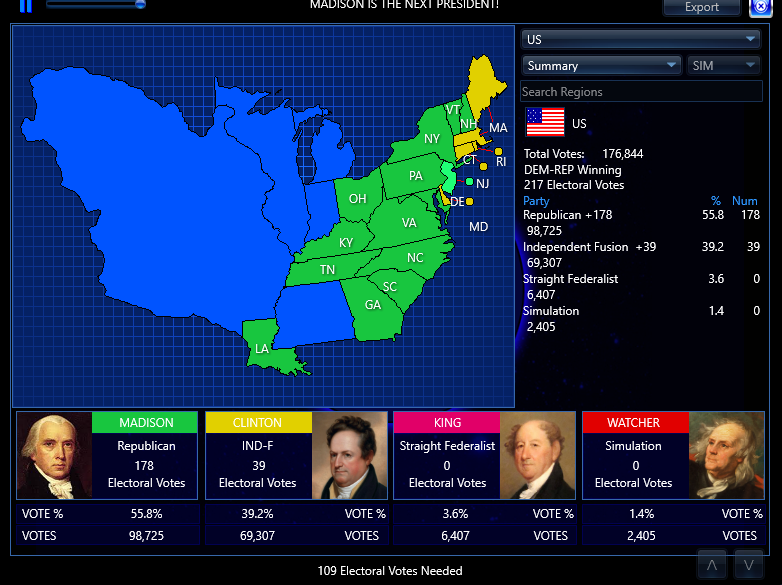 (Except for Burr, the other candidates are the same.)

Madison's second term is the same as OTL until Madison is killed during the Siege of Baltimore. Burr is notified and becomes the fifth American president and carries out the war. There are no more significant changes, save for General Jackson soundly defeating the British in New Orleans three weeks prior to the treaty of Ghent.

With this success and sympathy from Madison's death, Burr is nominated for president and wins the 1816 election (but this one is much closer than otl. Hamilton and other emboldened Federalists convince Chief Justice Marshall to run for president with Daniel Webster.) Hamilton has a great laugh when New York's electoral votes are won by an anti-Burr ticket. (BTW, Burr's Vice President is Richard Mentor Johnson of Kentucky.) 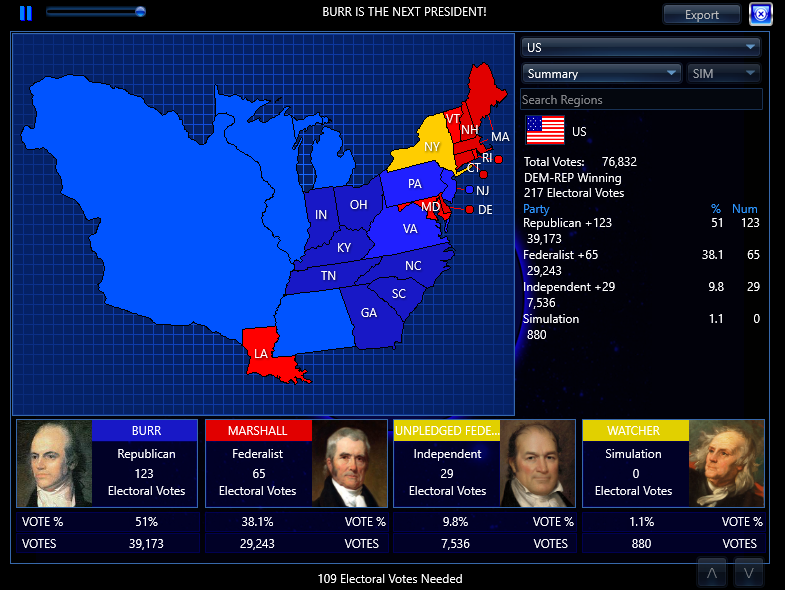 Burr manages to achieve success similar to that of Madison's. Unfortunately for him, he doesn't have Monroe's popularity or temper. The majority of Congress have become frustrated and southern Democratic-Republicans out-right oppose all his domestic initiatives. Hamilton takes this opportunity to collaborate with the anti-Burr insurgents and Burr is denied the nomination in 1820. Instead of running against Crawford, Burr begrudgingly accepts retirement and supports his would-be successor. Hamilton's efforts to be on the Federalist ticket came to naught and the party would come up significantly shorter than the previous election. President-elect Crawford and Vice President-elect William Harrison's only major opposition comes from multiple third parties supporting Governor DeWitt Clinton. 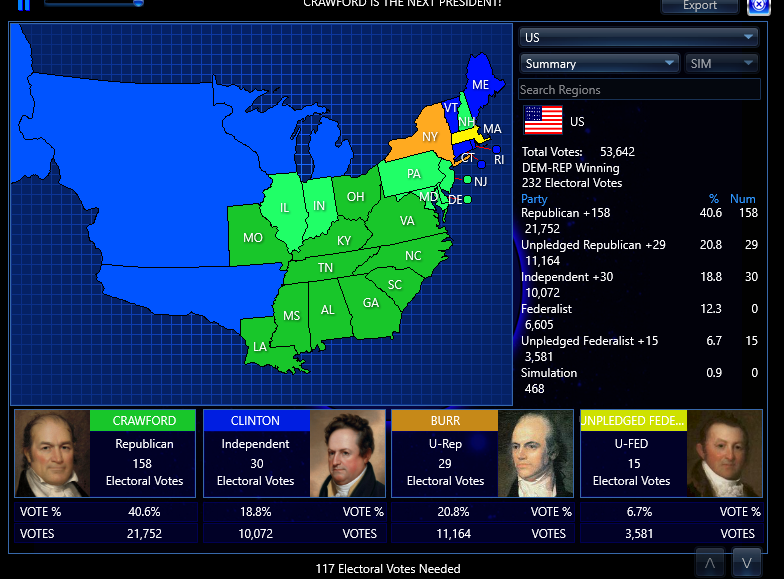 Is there any reasonable way to win a state in 2016 as a 3rd party?
You must log in or register to reply here.
Top
Top