freivolk said:
If I look on comparable spy series in East Germany and USSR, then I´m afraid, that heroic "Kundschafter für den Frieden" don´t have flirtious relationships with the class enemy.
Click to expand...

Yeah, but Jack could join the Revolution by the end

chankljp said:
(2) You consider the syndies forcing a family of singers to perform propaganda song too be 'too extreme' for them? For the record, the following is the word-by-word event text for the COF if they decide to balkanize Germany after winning WK2:

'The new government in Berlin is firmly under our control and northeast Germany is now a loyal member of the Internationale. Many Junker have found their just punishment in the people's court. May their bodies, now hanging from the trees and telegraph poles, be a warning to all reactionaries!'

These are the same people that engages in acts of cultural desecration by publicly dynamiting the Brandenburg Gate while singing the Internationale, and burning down the Royal Palace of Madrid after looting the place when they take the Spanish capital. Dragging a bunch of 'reactionary class enemies' (Which the Von Trapps family most certainly count as) in front of a stage and force them to sing propaganda songs is absolutely the type of thing they would do.
Click to expand...

I feel most people here have a uncritical view of Syndicalists, especially given their reputation of "Socialism but it works" among the KR fandom (aided that a lot of the other factions are pretty unpleasant by modern standards at best).
Last edited: Feb 28, 2020

freivolk said:
In Sliders they tried to avoid the most common AH´s, like "nazis win" and "Southern win". So I think, there will be nothing about WKII and 2ACW.
Click to expand...

So, what scenarios would the Sliders find themselves in then?

I just thought of a crazy idea for a version of Stranger Things: have it set in the 1980s German Empire. It would be like OTL 80s America but German. They would have to be a German version of Dungeons & Dragons of course, and the character playing the KR version of Lucas could be from a family of Mittleafrikan immigrants. But I think it could work.

On the syndicalist side, we could have Commune of France version of Tales from the Loop:

I like the idea of a Industrial non Syndie country producing mecha series with villains being the classical Well Intentioned but Too Violent or simply Bastards hiding under noble.catchphrases while Syndie countries usually go for more futuristic aethetics. By the time the cultural gap is closed among countries with different ideologies (if they're truly democratic, they should accept exchaging things).

The Real/Super division on mecha wouldn't exist. It would be replaced for Knight/ Comuneer. Some mechas would be based on "reactonary motifs" (knights, princess, gods) while comuneer mechas would be harder sci fi (at least until they start reality warping and being ancient deities because of course they will).

terranova210486 said:
I just thought of an idea for a KR version Hogan's Heroes:

Have it set during WK2 in a Russian POW and have Colonel Hogan and Klink work together if barely.
Click to expand...

Posted this in the wrong thread.

freivolk said:
I think there won´t be anything comparable in America. The special hate an ideological civil war create, let nothing good expect for the treatment of POW´s, at least nothing you write later a sitcom about.
In Europe it depends how the WK goes and how POW`s are treated. Let say there is a german sitcom in the sixties. Here I have the idea, that in the UOB camps were propably guarded by female militias. The joke could be, that there are "romantic collaboartion" between the german POW´s and their female british guards.
Click to expand...

What would this movie be like in a KRTL? 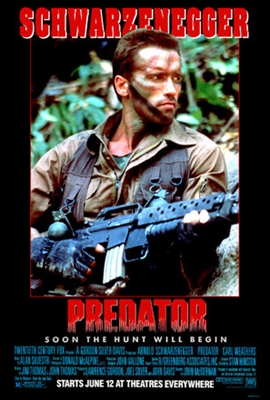 Jaeger(released in North America as Predator) is a 1991 German film released by Steiner Brothers Entertainment, starring Danubian action hero Ernst Schwarzenegger. Set during the Germano-Japanese rapprochement, the film depicts a team of mercenaries being dispatched into the Sumatran jungle to hunt down a cell of PKI guerrillas which had slaughtered members of a Japanese medical aid convoy several weeks earlier. Due to Japan’s actions in Sumatra during the East Indian War, large scale movement of Japanese regular troops into Sumatra would set off a firestorm of criticism both at home and abroad— after a grueling fifteen year counter-insurgency effort, Japan simply could not afford to take any actions which would suggest they were returning to the East Indies.

A mercenary team lead by Major Hans Gruber(Schwarzenegger) is therefore hired by the German government to “take care of the problem) in order to gain concessions from Japan at the negotiating table. Imperial Japanese Army G-3 officer Captain Kenji Yamata(Shiro Watanabe) is brought along with the team in order to provide a Japanese presence on the mission; other members of the team include former Mittleafrikan Askari and scout Jonas( Samuel Johnston); demolitions expert Erich(Emmanuel Braun); sniper Paul(David Kaempfer); medic Antonio(Ricardo Ortiz); heavy weapons operator Tex(James Varwell); and radio operator Chen(Brandon Li).

The team is inserted into the Sumatran jungle by helicopter, with orders to return to the LZ in one week‘s time. They quickly begin to notice signs that something isn’t right; Jonas discovers mysterious tracks and markings on trees that he can’t identify, and the team stumbles across the mutilated corpse of a number of jungle animals, including a large tiger. Pressing on deeper into the jungle over the course of several days the team locates the PKI camp; the guerrillas are depicted looting the corpses of several Japanese medical personnel; when they threaten to execute the lone survivor, a woman named Dr. Suzuki(Jennifer Ishida), Gruber and his team launch their assault on the camp, wiping out most of the PKI insurgents and rescuing the doctor. Dr. Suzuki is incoherent, raving about “monsters”; the team assumes she is referring to the guerrillas.

The team begins to make its way back towards the extraction point; however, while standing guard overnight, Antonio is attacked and killed by an unseen assailant; he manages to get off a single burst as he dies, awakening the camp, but a search turns up nothing. The creature is revealed to see heat; it also perfectly mimics Antonio‘s final words(Madre de Dios). The next mroning the team stumbles upon a destroyed camp and the skinned corpses of a half a dozen men; a search reveals that they were members of an Imperial Japanese Army Special Forces team which had previously been sent into the jungle, and that Yamata had been lying to the mercenaries from the get go. A tense stand-off ensues, which is only broken when the near catatonic Suzuki speaks up and reveals that the medical convoy had been attacked by an unseen force which had stalked them through the trees; the PKI guerrillas had stumbled upon the wreckage and had taken her, as the only survivor, prisoner. She also reveals that due to the guerrilla activity in the region, all of her fellow medical personnel had been armed; she had been the only one to refuse to carry a weapon.

The confrontation is interrupted by the same unseen assailant, which kills Erich with a blast from a plasma weapon; the remaining mercenaries and Yamata pour fire into the surrouding canopy, wounding the creature in the process, which leaves behind a bright green, glowing trail of blood. Jonas tells the others a tale about the “Simba”, a legendary tribe of “hunter spirits“ which would appear every hundred years to hunt lions in the Kenyan highlands, and who left behind a trail of bright green glowing blood. Realizing that whatever it is, the creature is unlikely to leave them alone unless they dispatch it, the mercenaries lay a trap for the beast; however, it successfully uses the trees to outflank the booby traps the team plants and kills Chen, destroying the team’s radio in the process. The creature lures Tex into a trap by mimicking Gruber’s voice and kills him with one of the team’s own booby traps, causing the mercenaries to realize that their best bet is to make for the extraction point.

As they make their way back towards the LZ the creature continues to stalk them; first Paul, then Yamata stay behind in order to delay the creature as long as possible and allow the others to gain more ground towards the extraction point. Finally, Gruber decides to make a stand at a river’s edge, sending Jonas to escort Dr. Suzuki the rest of the way back towards the extraction point. Covering himself with mud in an effort to camouflage himself Gruber soon realizes that the creature— which at this point finally appears in full view instead of as a shimmering outline or under the cover of active camouflage—-can’t see him. Gruber utilizes this to get the drop on the beast— a knockdown, drag out fight ensues and finally ends with Gruber successfully killing the hunter. Badly wounded in the process, Gruber stumbles into the river, where he is washed downstream to a local village and ultimately rescued by a search party lead by Dr. Suzuki and Jonas. The movie ends with a shot of a ship containing several more of the hunters entering orbit around earth, indicating that these creatures will continue to plague humanity.

Jaeger saw great box office success both in Germany and internationally; the English language dub, known as Predator, would become ome of the mostly widely viewed German films in North America ever. Jaeger would spawn four direct sequels and a whole host of other similar films and novels over the course of the next twenty years and even today is still one of the most widely known pop culture success stories to emerge from German cinema.

https://www.reddit.com/r/Kaiserreich/comments/foipm5
You must log in or register to reply here.
Top
Top