Most of the time (if the AI isn't being stupid), but in this case the SAW ended in a total OFN victory, and the OFN mandates have been around for the past couple of years trying to preserve American hegemony I mean rebuild Africa, and quite a few people aren't exactly pleased with the President not only breaking his promise to get them out of the war but also massively increasing their presence in that continent for a nation-building process that hasn't exactly gone as planned. 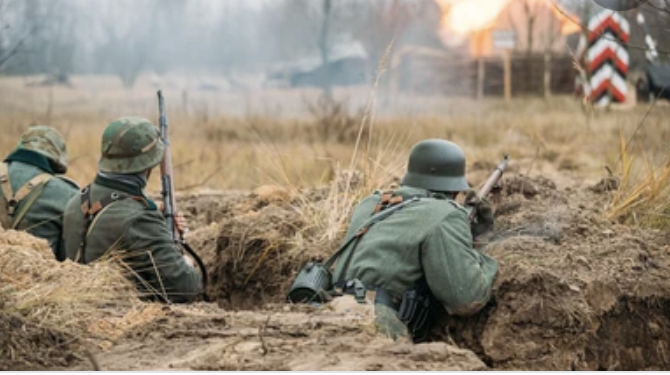 German Soldiers in Fall Rot defending against the forces of the Russian Republic. 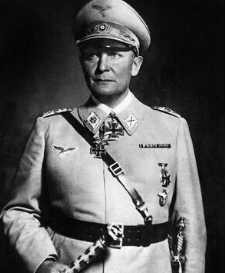 Hermann Goering 2nd Fuhrer of Germany and iniater of Fall rot. After germany failed to capitulate Russia he was couped by Ferdinand Schorner. 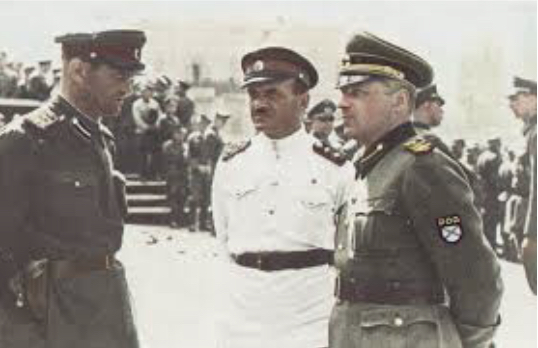 Forces of the Russian Republic preparing for battle.
OOC:Based on an actual game i had as AuthDem Samara where Goering won and did Fall rot before getting couped after i managed to defend against him for long enough.
Last edited: Mar 28, 2021 Soldiers of the Imperial airborne brigades, 2017

Most people do not remember an era when Russia was one nation rather than a geographical description containing various countries. 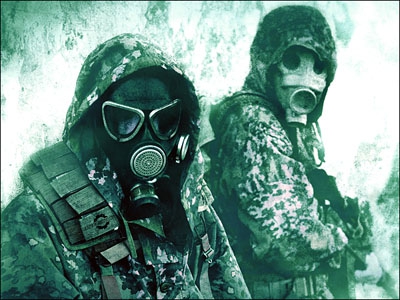 The mysterious Russian Black league is a legend among the rebuilding nations of the world. Officially the All-Russian Reclamation Government, colloquially known as the Black League or simply "Russia," is a large nation in Northern Europe and Asia. It has one of the worlds largest militaries and a sizeable population for it's damage. It's Capitol City, Omsk, is one of the largest cities on earth, mostly protected from the War by it's many Anti Ballistic Missile sites, keeping much of it's population and industrial capability alive.

Its massive underground bunker complexes, called the "National Redoubts" kept millions of people safe from nuclear war. After several years in the bunkers, the Population, kept alive by brutal rationing and harsh punishments. The meager growth and herding of animals, as well as the extremely slow decrease in population kept the survivors alive for twenty years. Over time, underground railroads between bunker-cities were drilled out, and overland communications were established with Omsk itself. This helped keep the bunkers in line, as Omsk could still affect the bunkers from the above-ground city.

In 2006, twenty-one years after Nuclear fire annihilated the world, the Bunkers opened. MI-24 helicopters and BTR-90 troop transports fanned out once "Operation Bogatyr" was commenced. Kilometer long columns of troop transports and supply trucks snaked out as Helicopters crisscrossed the land looking for survivors. Many Black League operatives were sent out over time, as a way to indoctrinate and provide relief for the millions of Russians above ground (Only about 25% of the Russian population of 80 million was able to be housed in the bunkers, with expansions over time). Some villages and remnants of cities had conglomerated, something intolerable to the Black League.

The battle of Kamensk-Uralsky was a decisive victory for the new Russian state, wiping out the largest independent population center remaining in West Siberia. T-80U Tanks stormed encircled the city, quickly destroying the few tanks the Militia fielded, mostly old T-55 and T-64 models. The battle progressed quickly as the much better trained and equipped Black League troops wiped out the smaller militia force in house to house combat. The city was first encircled on August 1st, and fighting ended on August 4th.

(The 'Heavy Weapons' are makeshift cannons and mortars)

Earthallias said:
The idea of their being wiki boxes following a nuclear war seems strange
Click to expand...

There wouldn't be. This world is sitting at preindustrial development, with greatly varying areas of industrialisation, and in some cases, even electricity. They are better off than medieval peasants, but not by a lot (this also varies greatly. Some areas are relatively unharmed by much of anything, Lichtenstein for example, while some people live in desolate wastelands deprived of any comfort and fighting for day-to-day survival). I just did the wikibox for clarity in the engagement, rather than bullet-point all the numbers and attach an awkward photo. 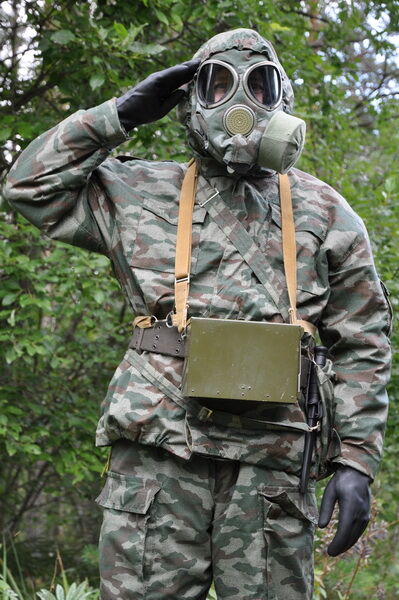 As the Black League expanded across Russia, Decontamination teams, along with armies of construction workers, came into cities, mostly in various states of disrepair. One "good thing" that the National Reclamation Government did before the Great War was create ABM systems to protect Russia from Nuclear missiles. However, the meager amount of them compared to the amount of Enemy nuclear weapons did not prevent hits from taking place all over Russia. Most major cities, with the exception of Chelyabinsk (Science and industrial center) and Omsk (Capitol and military-industrial center) were hit directly, while Chelyabinsk and Omsk were mostly protected by their more numerous and advanced ABM systems, while almost every other major town or city had a National Redoubt underneath (even Chelyabinsk and Omsk had their own Redoubts, which held thousands of people in their own right). 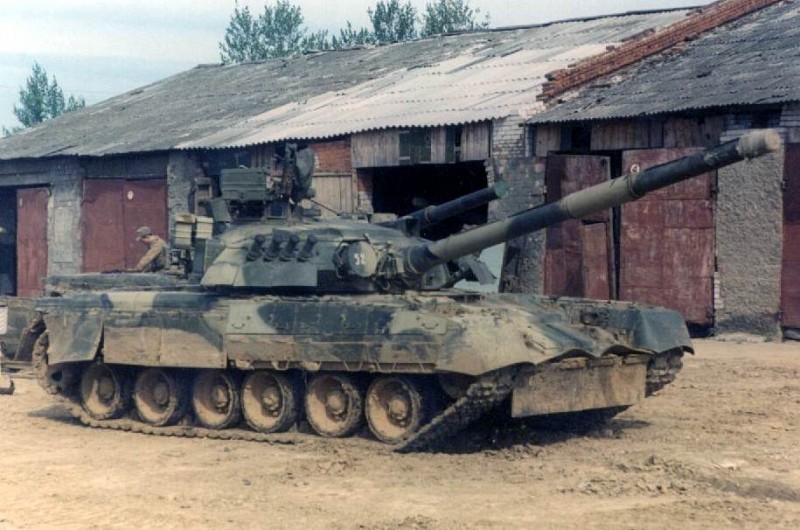 Reintegration with the surface began in 2021, as the world slowly recovered from its mess. The Black League sent out armies of construction workers and engineers, both civilian and military, from it's bases all across Russia. Its tanks, mostly the T-80U built in large numbers before the war, carried soldiers and supplies huge distances in relative security. Even the most hardened survivors and hunters in the Russian wastes thought long and hard about attacking tanks, especially those with as much firepower as the
T-80. 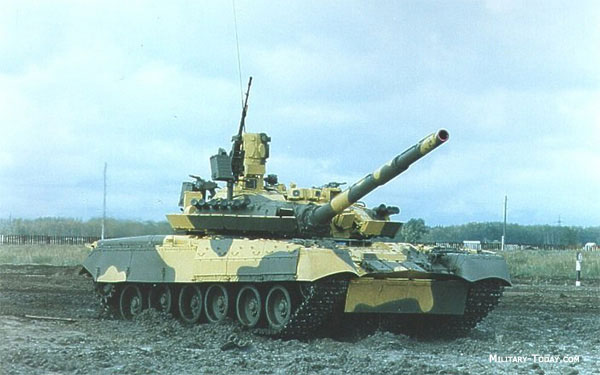 The next step after the famous and reliable T-80U was the M-1 upgrade to it, adding superior protection and another NBC protection layer to the tank, as well as capability to fire the 3BM60 shell, a new AP round that nearly doubled the penetration of pre-war rounds. This tank entered service in Russia in 2017 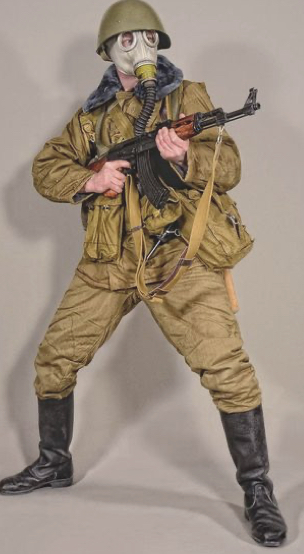 Soldier of the West Russian Revolutionary Front standing in position.
As the West Russian Revolutionary Front expanded across Russia they would under the Red Napoleon commit some very unethical things such as gassing entire villages. Utterly ruthless in their vision of the rebirth of a socialist Russia they would quikly expand,eventually uniting all of Russia. 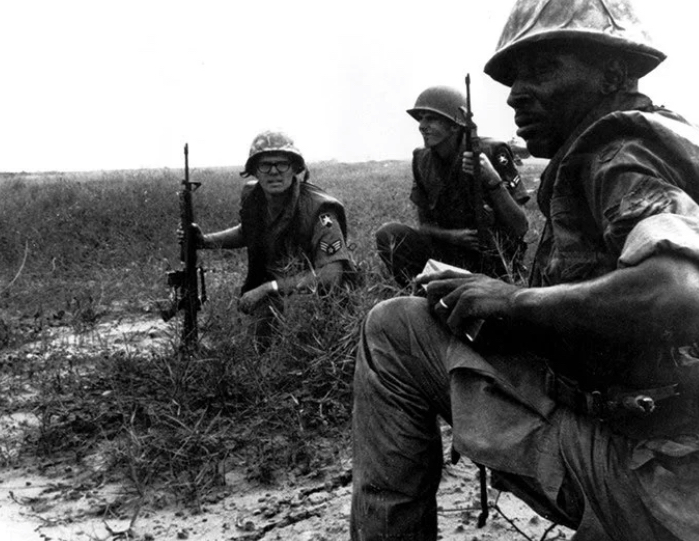 Following the years of the first Russian Vozhd, The series would run for five seasons, beginning in 1959 with Matkovsky's seizure of Magadan (then a shabby port town, as opposed to the bustling metropolis that it is in modern days- far surpassing reclaimed Vladivostok) in his schism of the Russian Fascist Party in response to Konstantin Rodzaevsky's (played by Russell Crowe) pro Nazi-German convictions and erratic, violent nature. The series goes through various events of Matkovsky's life as leader of what would become the Russian National Republic, like; the American mercenary Mitchell WerBell's attempted Coup, the grand showdown with Rodzaevsky, the tragic power struggle against his friend Nikolay Petlin, the brutal war against the Provisionary Central Siberian Revolutionary Council, negotiating unification with warlord Bunyachenko's Republic, then finally ending in 1975 with him signing a declaration of war against the Third Reich in his sickbed, just right before dying of cancer while he ponders his legacy.

The producers had originally wanted to use Russia as a major location for shooting the series, yet came to blows with the Nationalist government who wanted the series to adhere to specific "guidelines" and accept "supervision" to see that Matkovsky nor the National Republic were not being depicted in an unflattering light, considering that Matkovsky has to this day, an endearing Cult of Personality surrounding in him within Russian society as the "forerunner of Russian liberation", the fruits of whose leadership would eventually see Russia reconquering lands from The Ukraine to Outer Manchuria, from the Third Reich and Japanese Empire, though he wouldn't live to see such results.

The series would be highly acclaimed by many critics as one of the best cinematic works on the Russian Anarchy, being compared to the similarly praised 1988 miniseries adaption of Steven Smith's bestseller "Across the Tundra" (the author himself would also be depicted in the first season), in no small part due to Oldman's portrayal of the morally dubious yet still sympathetic Vozhd Matkovsky. Despite it's popularity in the West, the Russian National Republic itself would have a more negative perspective, with figures particularly condemning the show's "misrepresentations" of the Anti-Communist massacres that occurred during and after Matkovsky's conquest of Central Siberia (the National-Laborist regime's line being that such liquidations were a "unfortunately necessary pacification effort") as well as the conflict with Petlin, who the government had long claimed was a powermonger who wanted to usurp the republic and sabotage all that the Vozhd had accomplished as opposed to his portrayal as a pro-Democratic Hero-Antagonist. This discrepant reception between Russia and the West has been seen as a reflection of the distrust between the two, which is becoming more apparent in recent times as the RNR is increasingly seen to be going back to it's fascist roots (Which Matkovsky had claimed to done away with, in 1965) with it's oppression of the Caucasian and Central Asian populations, though there is still a great deal of hesitation to decisively distance from the Russians, in Washington, as the RNR is one of America's biggest trade partners and, because of the vast, rich natural resources especially in Siberia, one of the most invested nations.
Click to expand... 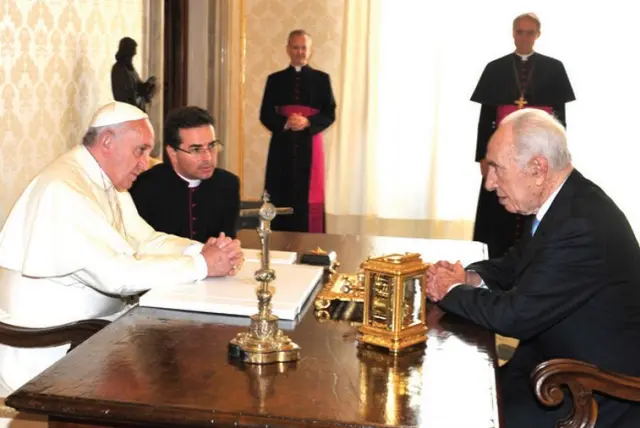 Shimon Peres maintained many ties with the Italians even many years after ending his tenure as Israel's second prime minister.
In fact, it is possible to define Peres and not Ben-Gurion, to the true point of origin for the future Israeli-Italian relations with Peres's Mediterranean Union project becoming a far greater success than any person could have imagined fifty years ago. 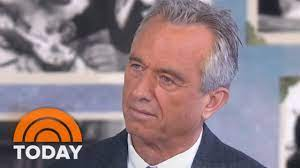 Robert F. Kennedy Jr. in an interview about his father, the thirty-seventh president.
The interview discussed at length about the former president's complex figure. 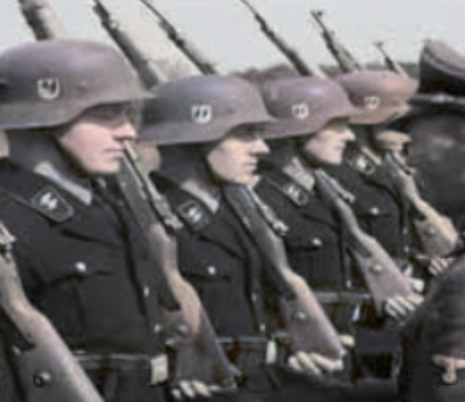 SS Forces under Heydrich Preparing for combat. Heydrich was the unexpected victor of the german civil war,through both a combination of luck and tactical genius on the part of his generals. 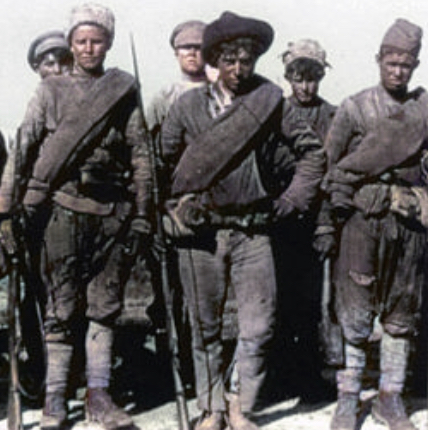 Soldiers of the Far Eastern Imperial Realm one month before the war with the PRC. 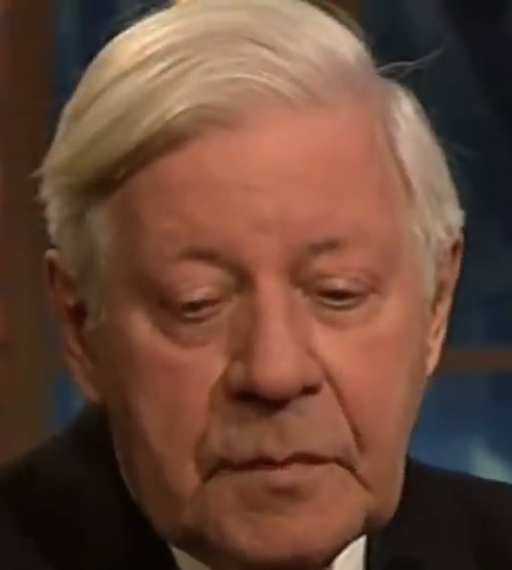 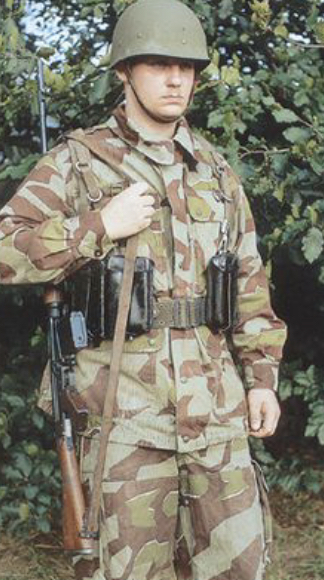 photo of a pro-Speer soldier during the German Civil War. 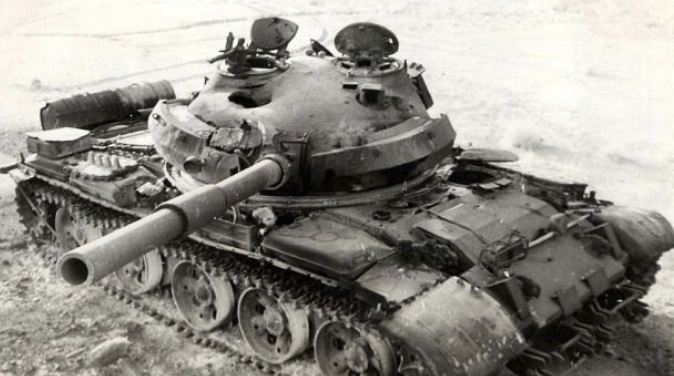 Photo of a West Russian Revolutionary Front Tank.
Last edited: Yesterday at 7:10 AM
You must log in or register to reply here.
Top
Share:
Share
Top