Chumbucket said:
View attachment 763898James Edmund Featherston (December 13th, 1844 - February 15th, 1900) was a Virginian slave overseer at a plantation, farmer, Confederate Soldier during the War of Secession, and father of Jake Featherston, the dictatorial President of the Confederate States of America from 1934 to 1944. Featherston's father was Matthew Featherston, a Virginian Farmer and his mother was Mary Featherston, a Housewife. James, who lied about his age, got into the Army of Northern Virginia at 16. He was present at Camp Hill when Lee's Army crushed the Army of the Potomac. After the Confederacy earned their Independence, Featherston retired back to his home in Virginia, believing himself to have been the reason for the Confederate Victory. Featherston later was hired by a Virginian Slave Owner to oversee the plantation. Featherston married his first wife, Jenny, in 1867 - having 5 kids, Jenny dying in childbirth in 1880, combined with the manumission of slaves by President. James Longstreet, caused James to resent reality, causing him to attack his children, verbally and physically. Also, in 1879, Featherston met his future wife, Grace at a Baptist Gathering, but didn't commit adultery for religious reasons. After the death of Jenny, Grace and James immediately married in 1881, having 3 children, Jake being the last one. Like before, James would show the same treatment to his and Grace's children, Jake and the child that Jenny last had receiving the most abuse, altrough Jake would also receive the most love, probably due to him being his last child. This caused Jake to love his father immensely and justify his abuse, this was shown when Jake stood up for his then deceased dad to Jeb Stuart III in 1936. James would retire from his farm in 1897 with his family. On the night of February 15th, 1900, Featherston, suffering from Tuberculosis and Pneumonia for 3 days, due to the cold weather, would die at his home, surrounded by Family and Friends.
Click to expand...

Looks good to me. Side note, Jake would have to be born in February 1887 at the latest to be eligible to run in the 1921 presidential election.

New Cleo Genesis said:
Looks good to me. Side note, Jake would have to be born in February 1887 at the latest to be eligible to run in the 1921 presidential election.
Click to expand...

I would honestly assume he'd be born from the Mid-1860s to the Mid-1870s because he claimed he was a boy when the Manumission of Slavery occurred, which was 1881.

Chumbucket said:
I would honestly assume he'd be born from the Mid-1860s to the Mid-1870s because he claimed he was a boy when the Manumission of Slavery occurred, which was 1881.
Click to expand...

I thought it was not actually depicted happening in How Few Remain, just that it was being planned by Longstreet, to be fulfilled later? I'll admit I haven't read HFR, only some of the later installments.

New Cleo Genesis said:
I thought it was not actually depicted happening in How Few Remain, just that it was being planned by Longstreet, to be fulfilled later? I'll admit I haven't read HFR, only some of the later installments.
Click to expand...

I'm pretty sure it was explicitly depicted.

New Cleo Genesis said:
I thought it was not actually depicted happening in How Few Remain, just that it was being planned by Longstreet, to be fulfilled later? I'll admit I haven't read HFR, only some of the later installments.
Click to expand...

Who should I do a wiki bio on?

Chumbucket said:
I'm pretty sure it was explicitly depicted.
Click to expand...


Chumbucket said:
Who should I do a wiki bio on?
Click to expand...

Eh, dunno. Have you checked the Filling the Gaps thread by any chance? You might find it inspirational as well. (I did one biography in it myself, which is this one)

The Book HFR ended With if being inferred that it was coming in the Near Future. Douglas comments in the last chapter that if the Union losing this time around means that the slaves will be freed then it was a devils bargen he could live with

While Featherston never followed on nuclear power, he did authorize the creation of what would be the largest gun in history, the Stalwart Heavy, or as the troops nicknamed it, Dolly.
Click to expand...

Featherston wouldn't do this. For one, the CSA was always behind the Union as regards heavy artillery, which is stated multiple times in the books. It would be the Union building something like this.
For another, the Gustav gun was designed to smash the fortresses of the Maginot Line, something that isn't a factor in this setting. The CSA would have no reason to build it.

Soundwave3591 said:
Featherston wouldn't do this. For one, the CSA was always behind the Union as regards heavy artillery, which is stated multiple times in the books. It would be the Union building something like this.
For another, the Gustav gun was designed to smash the fortresses of the Maginot Line, something that isn't a factor in this setting. The CSA would have no reason to build it.
Click to expand...

Mostly agree ... but I could maybe see it being an ego thing as during the GW he was always pissed the Yankees had bigger guns no matter how much he loved his 3 inch gun. But tye books make it clear the is a fan of the 4 inch guns the Army is equipped with in Return Engagement

British troops captured by the Germans and Norwegians following the "Trondheim Trot," 1943

With the Tide of War beginning to turn against the Allies and the German attacks in France increasing in ferocity, the British and French High Commands agreed that the "fiasco" that was the Norwegian campaign had to be ended, if for no other reason than that troops were badly needed on the Continent. For over a year since Defense Minister Mosley's attempt to seize the valuable Iron Ore supplies transported from Sweden to Germany via Norway's Ice-free ports had begun, there had been little movement outside of the initial landing zones, and the Norwegians, supported by "Kampfgruppe Nordland" a force of German and Austrian troops, had put up fierce resistance. King Haakon VII had managed to escape the initial British assault on Oslo due to the heroic defense of Oscarsborg Fortress in Oslofjord, and had rallied his people to the defense of their homeland. 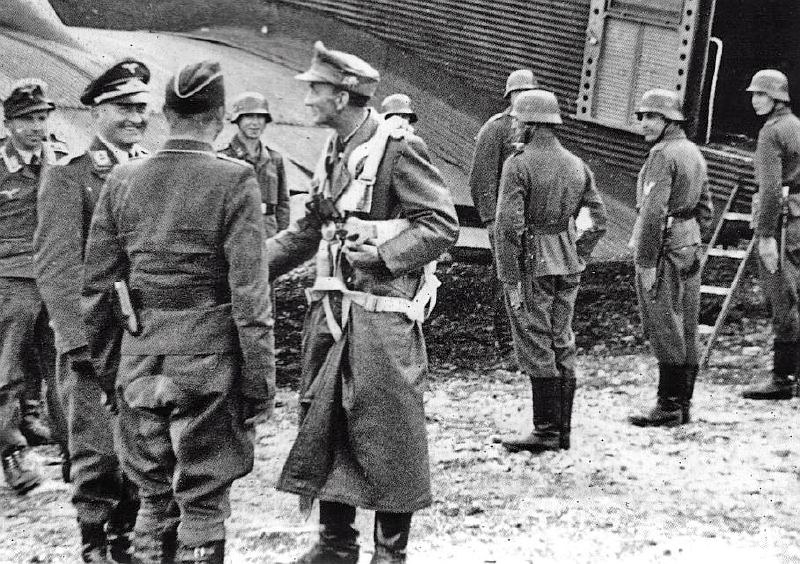 General Eduard Dietl (center, in Parachute harness) of the German 3rd Mountain Division, was named overall commander of Kampfgruppe Nordland, and put his experience in mountain fighting to effective use in pinning the Allies in place. Well-emplaced Mountain howitzer batteries and machine gun nests prevented movement outside the Ports and landing grounds already occupied by the Allies, and likewise prevented them from supporting each other, necessitating the British to be running a constant stream of supply convoys up and down the Norwegian coast. These ships often fell victim to the preying guns of the Luftwaffe and the Norwegian Royal Air Force, which made excellent use of modern aircraft provided by the German and American aircraft industries.

The "Trondheim Trot" as it came to be known, was the disastrous withdrawal of British forces from the port city of Trondheim, site of a major naval engagement at the start of the invasion. Norwegian Forces, under the command of General Max Manus and supported by the German 10th Mountain Division, had formed a defensive ring around the perimeter of the city and stopped any British movement outwards in its tracks.

the British, low on ammunition, food, medical supplies and Morale, had already begun gradually withdrawing forces from the city, usually by night in small vessels as to not arouse the suspicion of the Central Powers forces. However, in the demoralized state they were, British security was not as tight as it could have been, and a local fisherman whose boat had been impressed into the evacuation spoke better english than he let on, and listened very carefully to the chatter among the British troop on his boat. what he learned startled him: the trickle of withdrawing forces was planned to turn into a full-scale evacuation starting September 12th. British warships and bombers would put up a covering bombardment against Central positions while the infantry withdrew to the port and evacuated to offshore landing ships.

Sneaking himself away in the dark and coming ashore further up the coast, the Fisherman found a passing Norwegian patrol and was eventually able to report the news of the evacuation to Manus. Conferring with Dietl, the Central Powers commanders agreed: the time had come to go on the offensive.

The "Trot" began before dawn on September 12th, 1943, with a sudden and unprecedented barrage of British forward positions. German Panzers, smaller models more suitable for the tight mountain roads, led forward German and Norwegian troops towards the weakened British positions, which had slowly but surely been denuded of manpower and weapons as they pulled back to the port. the rearguard, for all their determination, was no match for this offensive force. The Luftwaffe meanwhile pounced on the Allied ships offshore, catching them by surprise and sinking several large transports.

Within the port, trepidation at the sudden barrage quickly turned into panic once word reached them from fleeing rearguard men of the offensive. What was already a barely organized evacuation was reduced to a rout as the fleeing British stormed the evacuation boats, shooting Officers and Military Police who attempted to restore order. Some sailors abandoned the men entirely, and fled for their own lives in whaleboats and stolen fishing vessels, leaving the forsaken landing craft to rapidly overfill with panicked men, with no one to operate them.

When the Central Powers' armored vanguard arrived at the harbor, they found it choked with abandoned and half-sunken landing craft, stolen fishing boats and makeshift rafts, and the docks and beach packed to bursting with men, with several almost comedic scenes of completely out-of-their-element soldiers trying to figure out how to sail small fishing skiffs and pleasure boats, many of them crashing into each other, the docks, the beach or the walls of the fjord. Some men had attempted to swim for it and were being fished out of the freezing water by their colleagues. Many more British had simply given up, and had to be dragged out of the few still-standing pubs and wine cellars, drunk as lords.

When the whole total of British were assembled and counted, there were something akin to 28,000 British troops who had been made Prisoners, out of an original force in and around Trondheim of just shy of 40,000. Compounding this was the loss of all their equipment, from mess kits to machine guns to Bedford 3-ton trucks, much of it still in working order. Several Transport ships and 2 Royal Navy destroyers had also been sunk.

The News of this victory for the Central Powers reinvigorated the resolve that the war could still be won, While some commenters compared it to the recent Confederate loss at Pittsburgh, or the disastrous Gallipoli campaign in the Great War, the latter comparison being used as a particular jab at Winston Churchill, who had been that battle's main proponent.