Michael Jackson as a Charles Xavier
Click to expand...

Kill it with fire!

Michael Jackson as a Charles Xavier
Click to expand...

Gillan1220 said:
Back from the Rubble 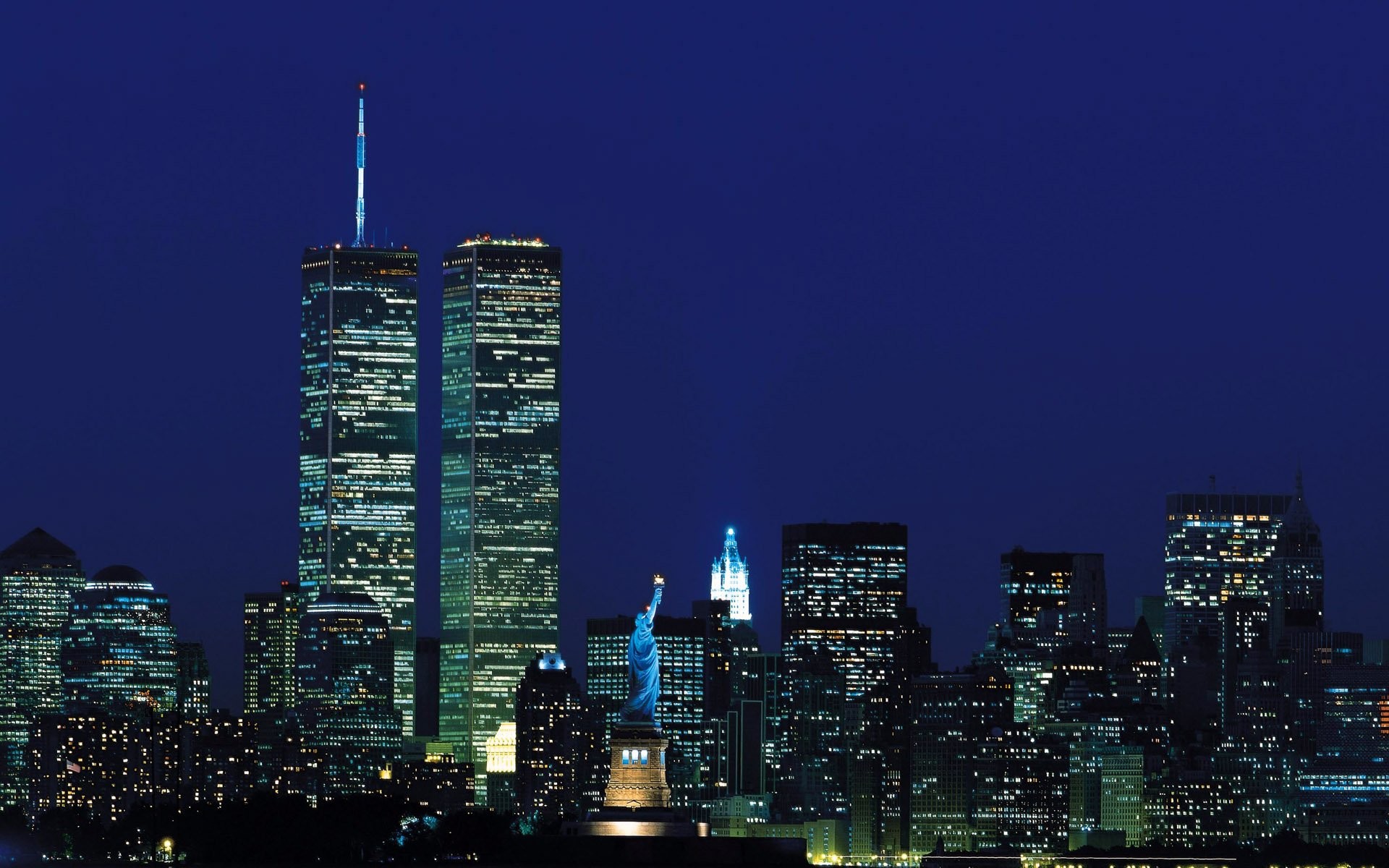 The rebuilt Twin Towers of the World Trade Center in its glory pictured here in 2016.
​
Following the September 11th attacks, there was debate whether to rebuild the towers or replace it with a new one. Ultimately, New Yorkers pushed for a rebuilding effort since the Twin Towers were an iconic symbol of the Big Apple. Ground breaking began in 2006. The tower was finished by 2013 and fully opened to the public by 2014.
Click to expand...

Speaking of the World Trade Center: 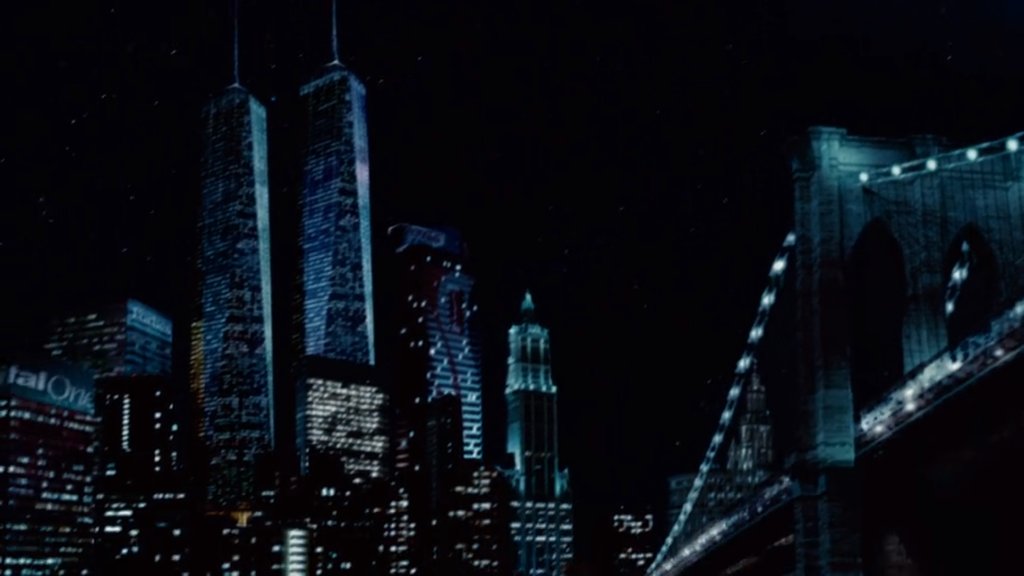 A photo of the Lower Manhattan skyline in an alternate version of the late 2020s showing a new set of Twin Towers.

View attachment 570646
A photo of the Lower Manhattan skyline in an alternate version of the late 2020s showing a new set of Twin Towers.
Click to expand...

I always wonder why they never rebuild the Twin Towers. That would've been cooler than what we have.

Although it is likely the New World Trade Center could become a beloved landmark like the old one, which was once despised as a failed urban renewal project. 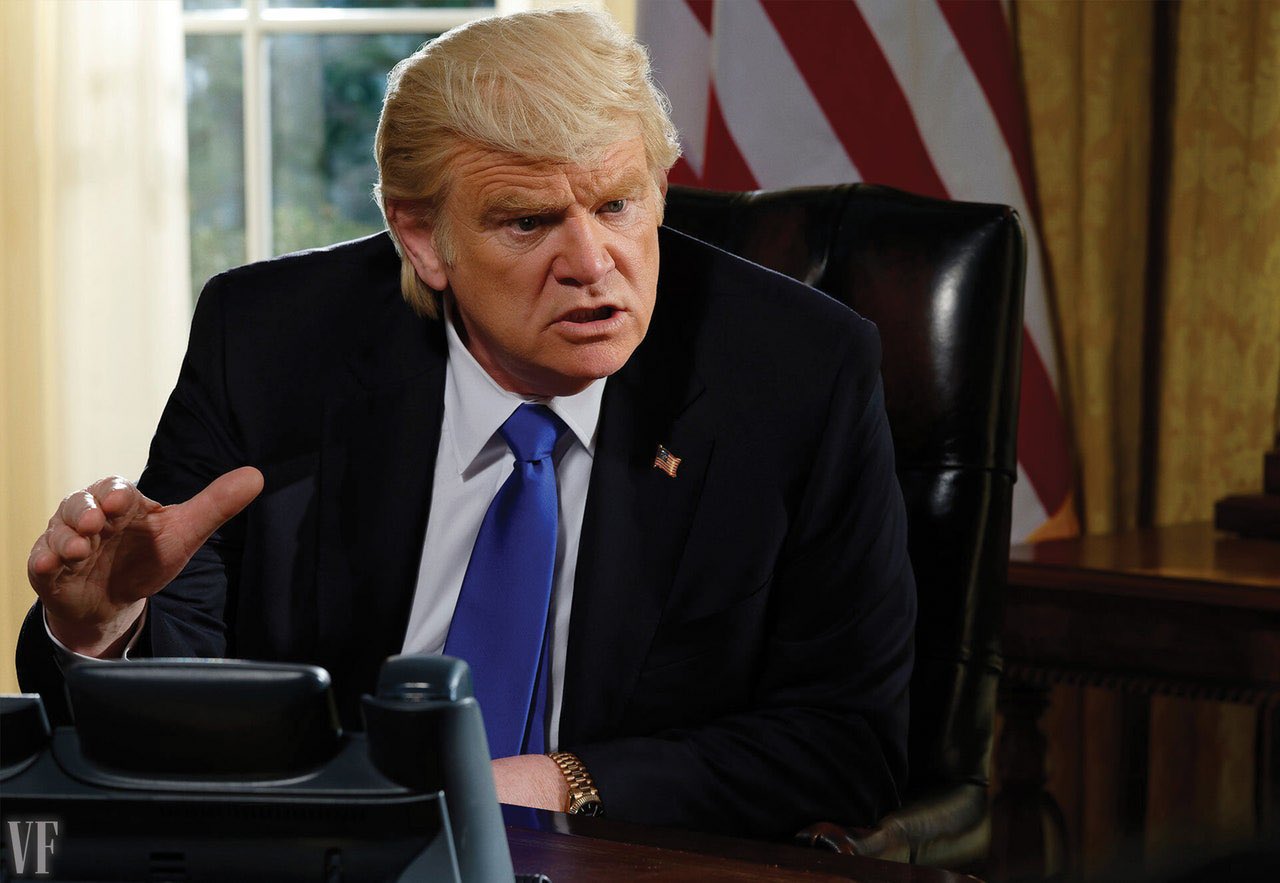 President Brendan Gleeson answering questions during CNN interview. Gleeson's popularity has seen a steady drop with constant rumors about the president excerting pressure to help the acting career of his son Domhnall. 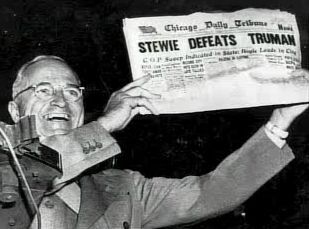 President Harry S. Truman (Democratic- Missouri) smiling and holding up a copy of the Chicago Daily Tribune that says STEWIE DEFEATS TRUMAN. Truman's opponent Stewie Griffin (often referred to just his first name Stewie) (Republican-Rhode Island) had been widely expected to defeat the incumbent president in the 1948 United States presidential election, but Truman was able to narrowly defeat him in an upset.

Thought I'd post some more of the railroad ideas that were, among other things, inspired by @Murica1776 and @TheMann. As opposed to the purely American flavor of my previous posts, this is going a bit more international and loosely deriving ideas I proposed to the former for if he makes an alternate version of Let the Eagle Scream, with one of said ideas heavily involving the UK and US allying with Imperial Germany, and the latter later forming a Commonwealth after a war with the USSR. 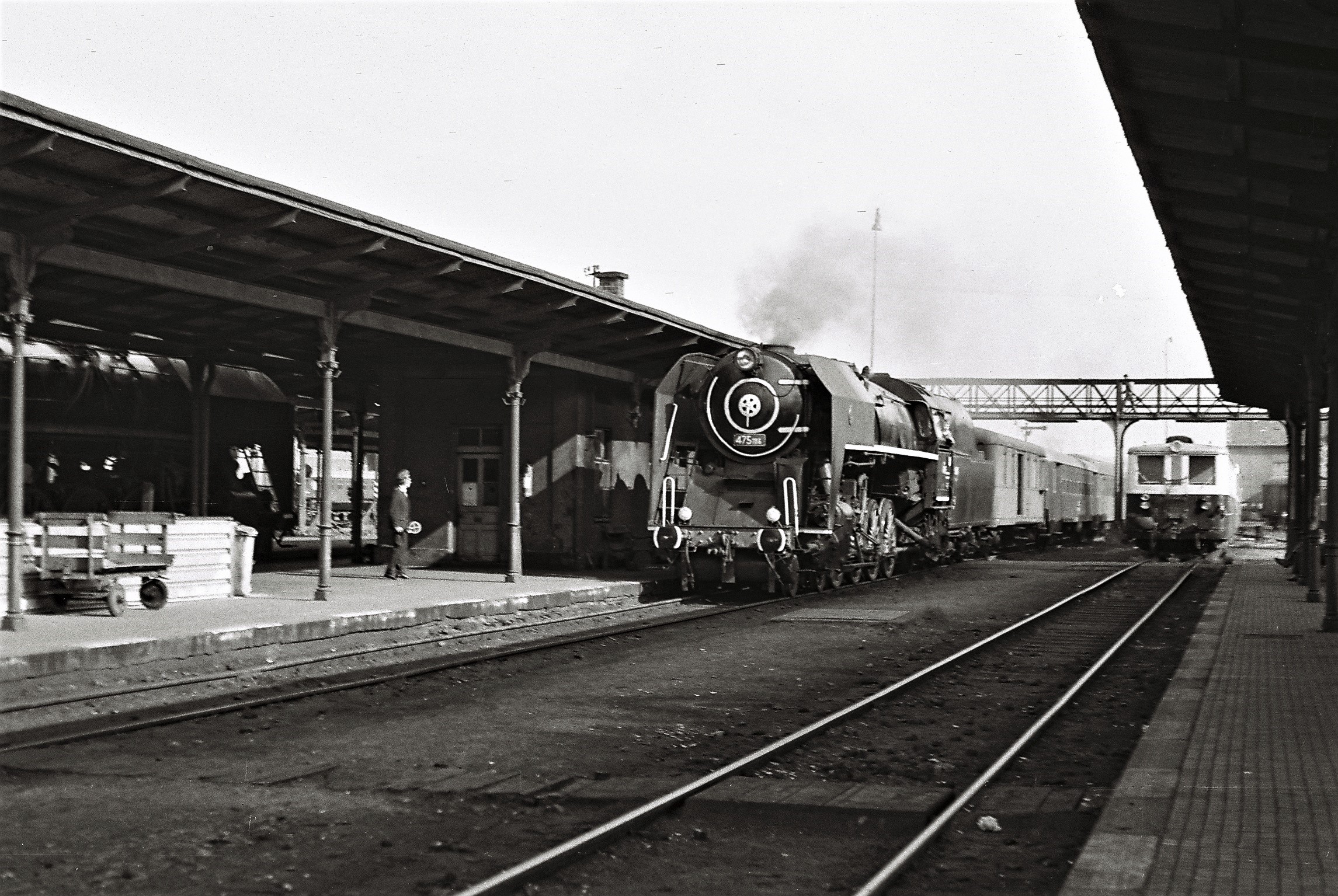 The Deutsche Reichsbahn 475 Class Mountains, which saw service across the Imperial German Commonwealth until steam's decline began in earnest, were built mainly by Skoda in the Dominion of Czechia. However, the example pictured above was actually built in Britain by the Manchester-based Beyer Peacock & Company. 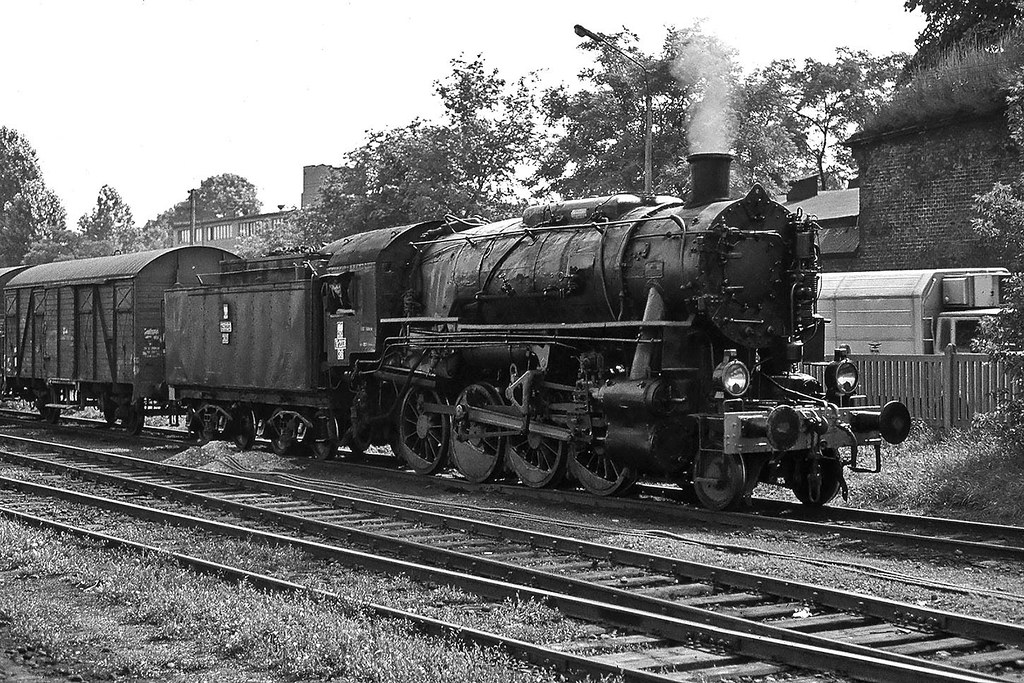 On the flip-side of post-war railways in the German Commonwealth, a USATC 2-8-0 makes its way through a town in the Dominion of Poland. One can tell this specific engine was built by the American Locomotive Company by virtue of its builder's plate being in the shape of a square.

Before the Second World War's China theatre began in earnest, the Japanese government had conceived some ideas for a line in Japan that would be operated with both steam and electric. When the Soviet invasion of China and subsequent war put these plans on hold, the plan was shelved and re-emerged as a purely electric-operated line. However, the steam idea would eventually make its way to post-war China, where the 4-8-4s proposed for the line would be built to help rebuilt the China Railway's passenger trains.

Despite appearing like a war engine, this decapod was actually built after the war. The diamond builder's plaque gives away that this engine is a Lima product, and the use of a knuckle coupler instead of buffers and a chain means that this engine is headed to China rather than Europe or North Africa. 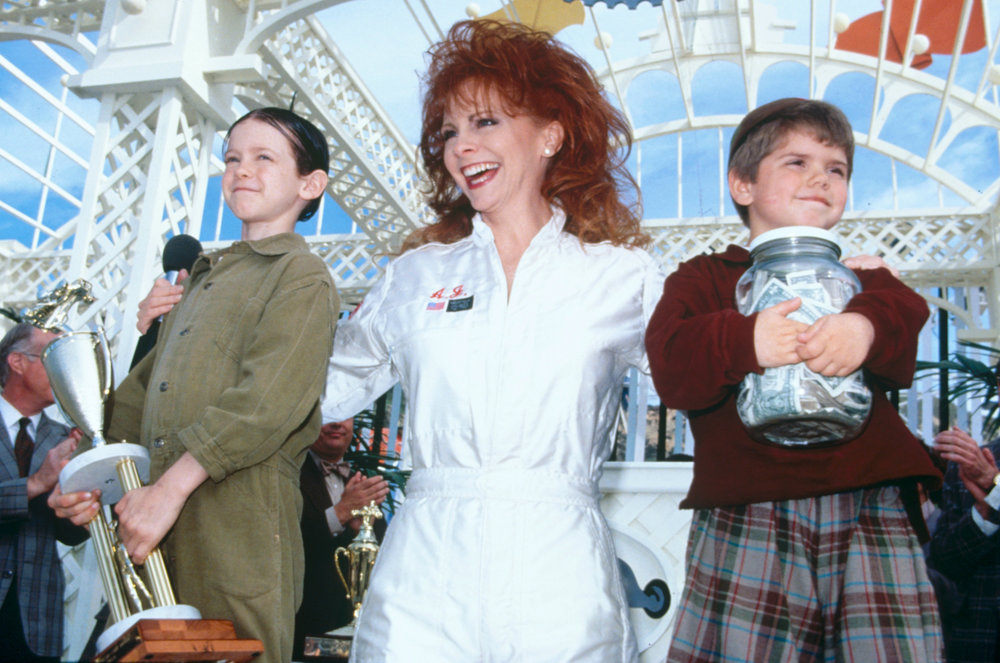 Professional race car driver Reba McEntire posing with two of her child fans in the mid 1990s.
Last edited: Friday at 10:44 AM 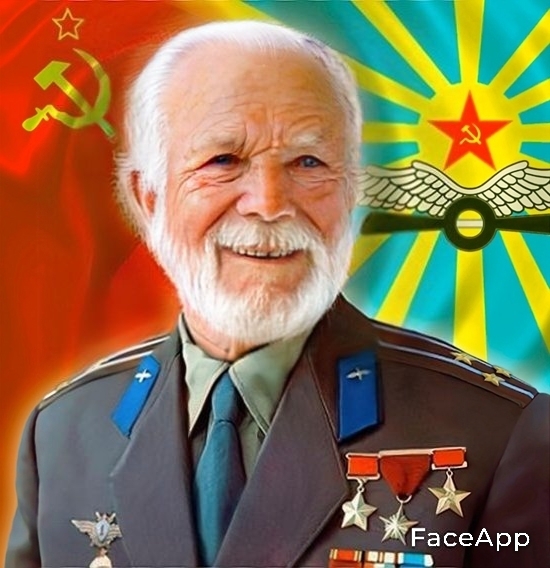 former astronaut Gagarin in his rare 2003 appearance at his Oklahoma home. the week before Gagarin had suffered a heart attack at his home, went to the hospital and received proper treatment and everything is going well. 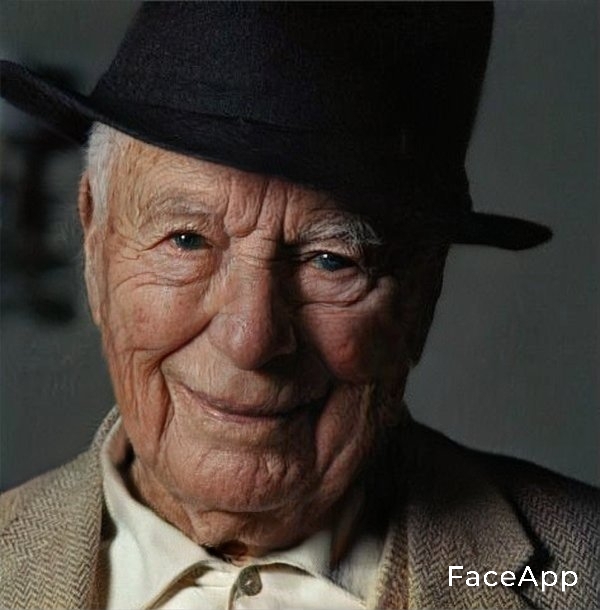 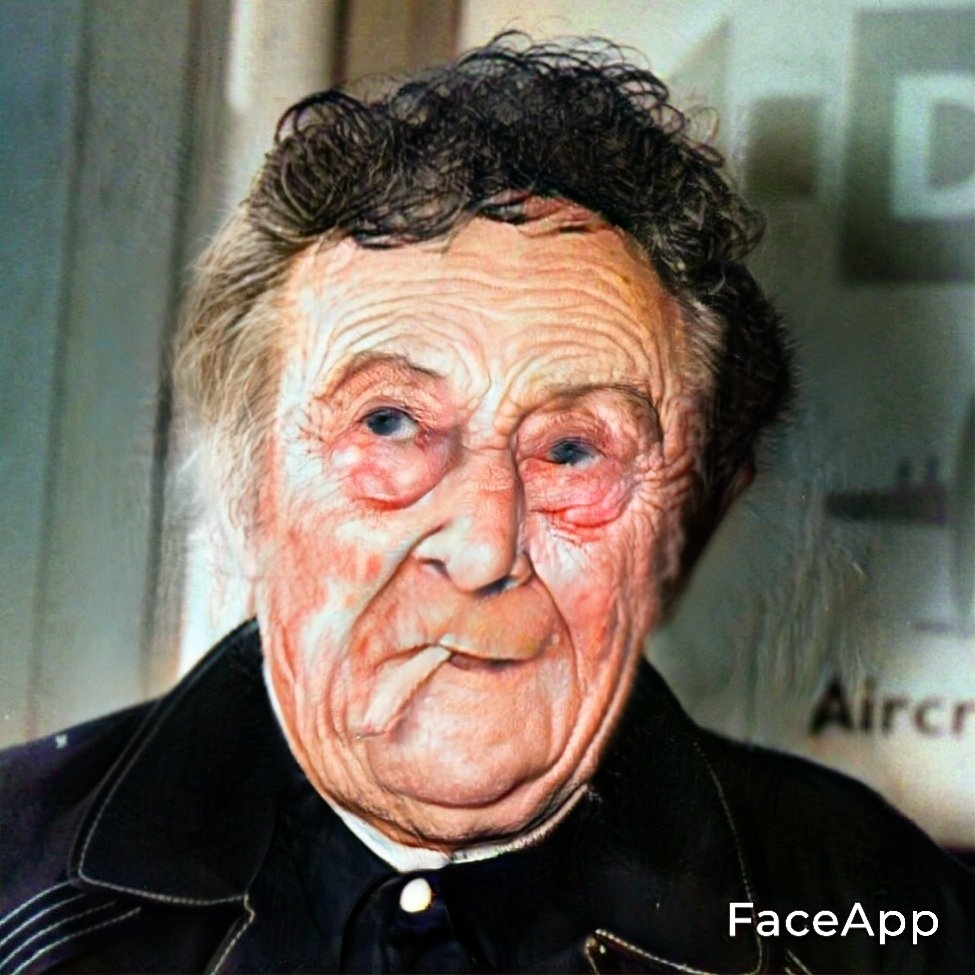 September 3, 2015: Members of the Great Japan Patriotic Party marching on the streets of Tokyo after Prime Minister Shinzo Abe declared the revocation of Article 9, thus enabling Japan to fire the first shot whenever the country deems necessary. The Great Japan Patriotic Party has welcomed the move as they see the need for increased cooperation with the United States, South Korea, and their allies against a resurgent China and Russia. Naturally, this move was heavily condemned by both Koreas, the PRC, and the Russian Federation.

Here is the Gateway Arch (St. Louis, MO, US) in an alternate timeline where the Gateway is built instead in Wheeling, WV, US on the Ohio River (instead of the Mississippi River as in OTL).
In this universe, the Gateway is instead known as the "Jefferson Memorial Gateway".
.

Teddy Roosevelt and the Dinosaurs

We all know of Theodore Roosevelt. He was the 26th President of the United States, the 25th Vice President, the 33rd Governor of New York, as well as an author, conservationist, explorer, historian, naturalist,police commissioner, politician, soldier, sportsman and a few other things. However, one of those things left out of history books is that he also hunted and tamed dinosaurs. Here's a few examples now. 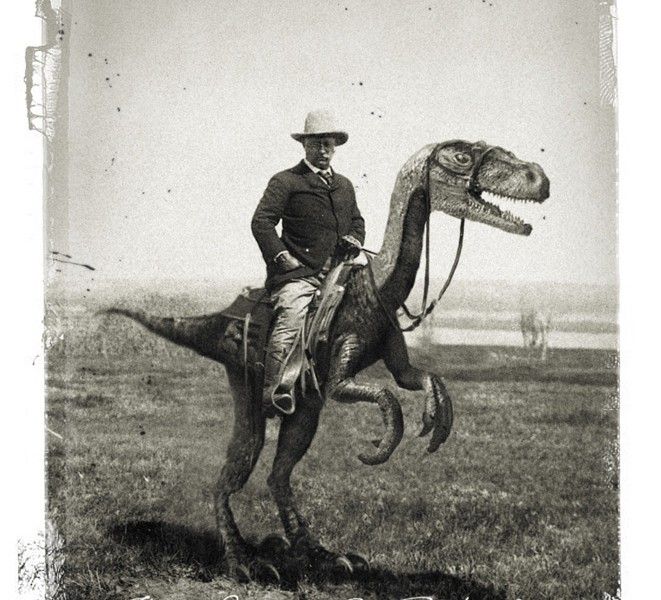 Theodore Roosevelt riding a Velociraptor, the first dinosaur he was ever able to tame. Photo taken between the late 1890s and early 1900s. 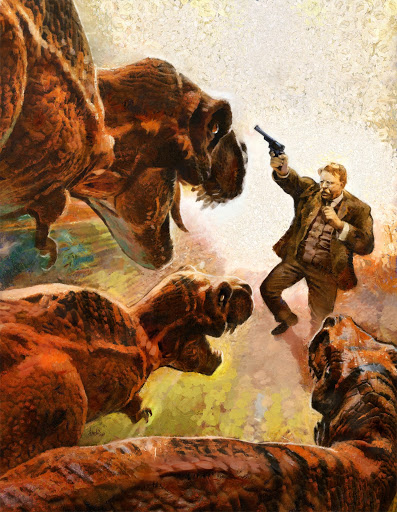 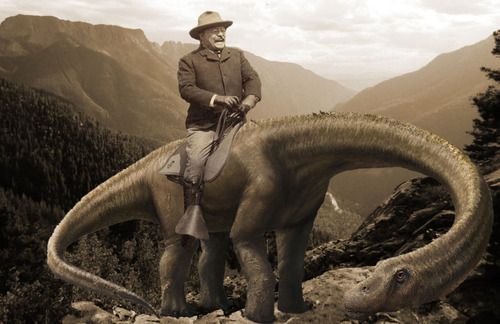 Theodore Roosevelt riding on a baby Brontosaurs/Apatasourous. Teddy would figure out that taming dinosaurs as babies would be much easier than trying to tame a fully grown one.

I know! I know! This post is very ASB. Just pretend that dinosaurs somehow survived for 65 million or so years or than we somehow had the technology to clone them back to life in the late 1800s/early 1900s. I had originally planned on uploading two more images, but the website wouldn't allow them because the files are apparently "too large".
Last edited: Friday at 2:02 PM

Did he run for reelection in 1912 as the nominee of the "Bull Raptor" Party?

jack_donaghy_is_the_shado said:
Did he run for reelection in 1912 as the nominee of the "Bull Raptor" Party?
Click to expand...

You know, I'm not sure. I don't think I've thought that far ahead yet. The post I made was really just Theodore Roosevelt being badass with dinosaurs. However, your suggestion does sound awesome!


Mr. & Mrs. Roper (cameo on The Love Boat)
(Inspired by @Brainbin's That Wacky Redhead timeline)
Threadmarks
You must log in or register to reply here.
Top
Top