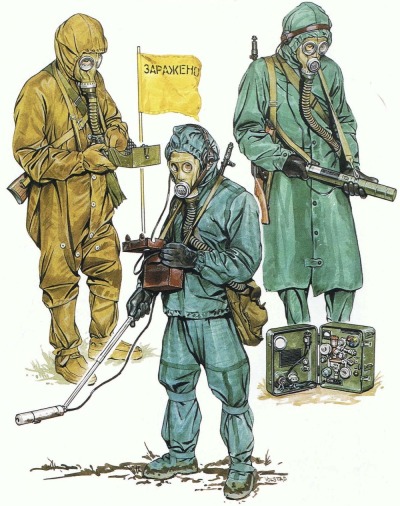 Currently the most common form of such protective clothing in the Ground Force, the OP-1 is designed to be worn long, as in the right figure or gathered up and trapped into a coverall, as in the left figure. Soviet troops normally carry only a gas mask and a chemically impregnated paper sheet which folds out into a small tent, providing limited protection until the suit can be donned. The suit is usually carried rolled up on the strap of the fighting load hames, or at the top of the ruck sack. It is not hermetically sealed, so the wearer must first put on a chemically impregnated grey cloth body stocking. The suit is of rubberized fabric, without ventilation, and can only be worn for less than an hour in warm, strenuous conditions before the wearer collapses from heat exhaustion. Colors vary from a kind orange to pale green.
The left figure wears the basic enlisted men’s ShM mask, hermetically sealed and extremely uncomfortable. The man on the right, an officer, wears the ShM Model K, with a small voice device which allow officer and NCO to speak to troops. Neither model has any means for drinking liquid. The soldier to the left wears three-finger winter protective gloves, and the officer on the right the five-finger black summer protective gloves. In comparison to contemporary NATO issue, especially the British developed types with semi-permeable charcoal impregnated fabric, Soviet suits are primitive, uncomfortable, and dangerous to wear over prolonged periods.
The enlisted man carries a standard chemical detection kit. the VPKhR; hand-operated, this can be used to test soil samples. On the ground is a GSP-1M automatic chemical agent detector-alarm. This tests for common G-type nerve agents, and has a secondary function of alerting for radioactive contamination. The officer uses the PPKhR hand-held chemical detector. semi-automatic and powered off the batteries of a chemical scout vehicle such as the BRDM-2Rkhb.
Click to expand...

A multi-piece suit issued mainly to Chemical Defense Force personnel, the L-1 is more thoroughly sealed against air intrusion. This ShMS mask differs from the others in that it can be fitted with optically corrected lenses which substitute for eyeglasses when the mask is worn. Made of optical glass, they allow the wearer to operate optical sights, and the mask is issued to gun crews, tank gunners. RPG-7 gunners, etc. This man carries a DP-12 contamination survey meter to check for radioactive contamination. In the background is a tropical Soviet contamination sign, which is planted by a marking system on the rear of BRDM-2Rkhb chemical scout vehicles.
Click to expand... 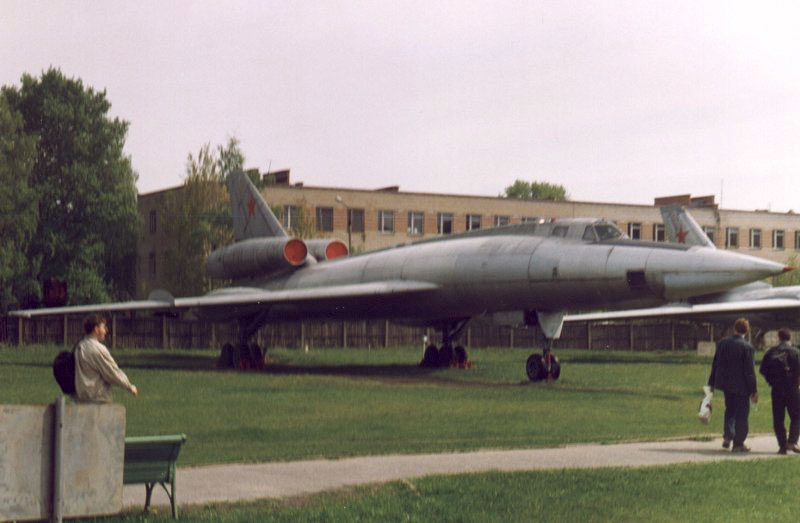 Soviet airforce Tu-22, after being tested on 1999 and get repaired 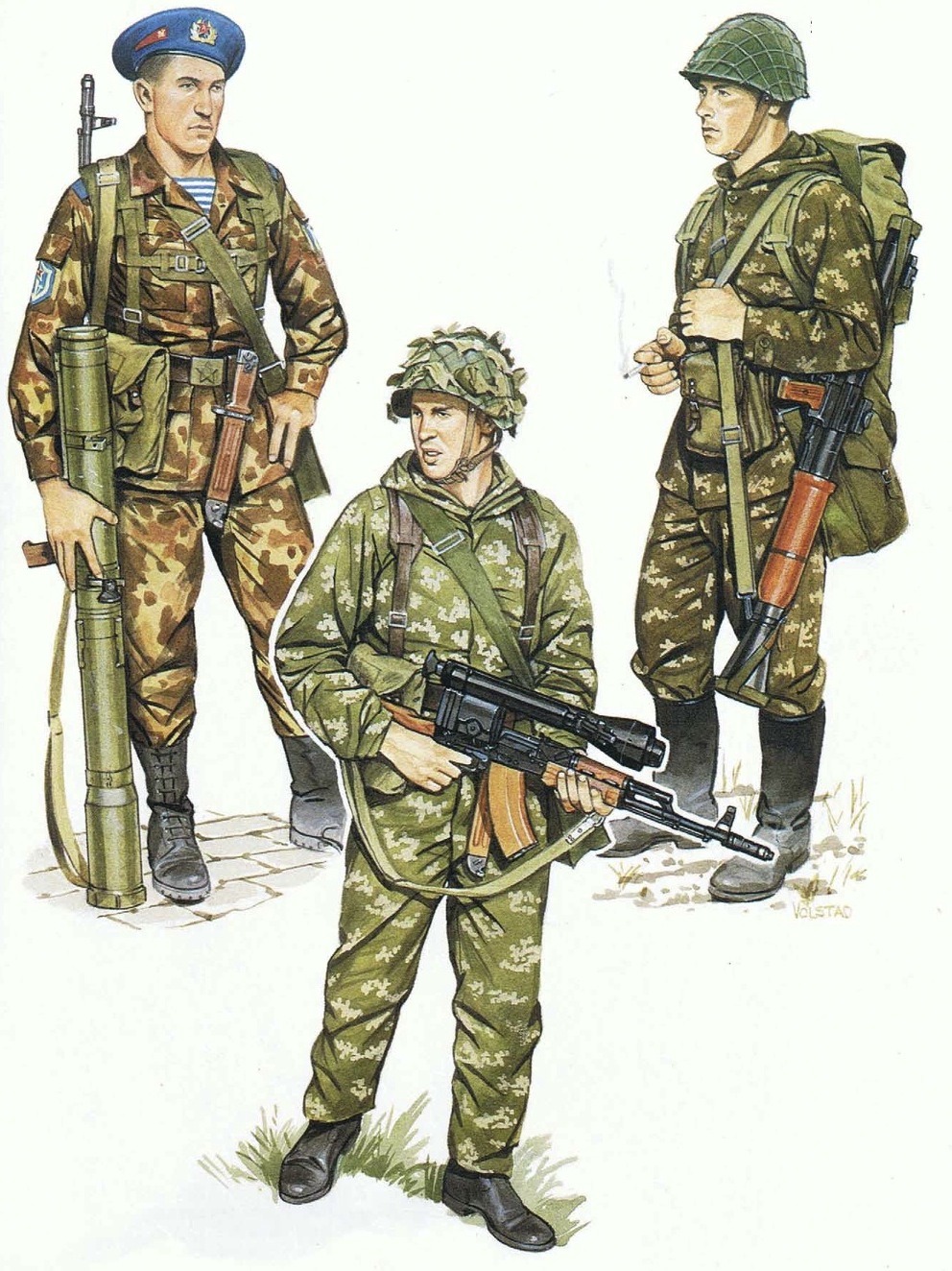 The Airborne Assault Force tends to go its own way, to some extent, in the matter of uniforms. This new camouflage dress, introduced c. 1988, follows the cut of Polish and Czechoslovakian examples;. This is rumored to be in fact a Spetsnaz uniform, but this seems unlikely. (According to Viktor Suvorov the Spetsnaz has its own field uniform in light grey: a basic jacket and trousers, worn with leather jump boots and jump helmet, plus a winter parka with a detachable extension which can be fitted to the bottom to convert it into a longer greatcoat in extremely cold weather. The Spetsnaz also reportedly carry a rucksack derived from the VDV’s RD-45 but with modernized webbing.) This paratrooper carries the new RPO launcher, akin to a bazooka, which can fire either high explosive or incendiary rounds and is intended to replace conventional flamethrowers.
Click to expand...

The most common camouflage uniform: the KLMK, in grass green with angular sand splotches. The helmet cover with artificial foliage underlines currently increased Soviet interest in field camouflage. His AK is fitted with an image-intensification (passive) night sight.
Click to expand...

In the mid-1980s this new, two-piece version of the KLMK was introduced, in a coarse sacking material treated to reduce infra-red visibility. This RPG gunner carries the new RPG-16; when not in use the openings of the launch tube are covered and the PG0-16 sight is carried in the small pouch on the left of the belt. Note standard RPG grenade back pack.
Click to expand... 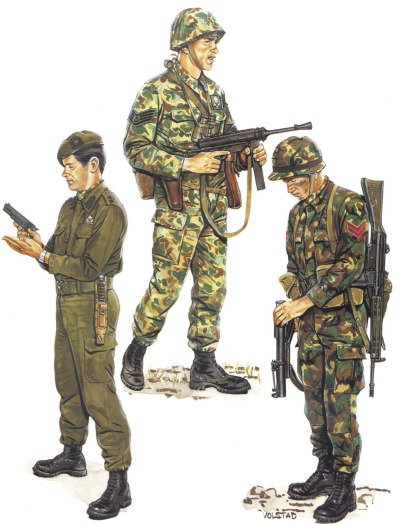 This uniform also serves as temperate combat uniform for all except elite units. The beret, originally introduced in black for armor, is being increasingly adopted by other branches in a variety of colors. Cap badges arc either brass or in subdued black thread, and are for general officers the peaked cap badge with red backing, for other officers the same without the backing, for professional NCOs without the wreath; for conscripts no badge. The beret is replacing the peaked field cap, which has the same cap badge except that officers have a brown leather chin-strap, and conscripts have a branch-color disc as cap badge.
Officers’ subdued rank insignia is black thread, with a red wreath-backing for general officers. Other ranks have no shoulder straps, and black chevrons for professional NCOs, red for conscripts, on both upper sleeves. Collar patches (here dark green for infantry) are red with a black button and oak-leaves for general officers; branch-color with a black button and badges if appropriate for other officers; branch-color without a button for professional NCOs; no patch for conscripts. This commando officer wears a Colt .45 pistol and a dagger; a subdued commando breast patch, and a camouflage-pattern cravat.
Click to expand...

Camouflage uniforms, at present confined to elite commando, paratroop, Gendarmerie-Commando and Naval marine units, may eventually be issued to the whole army. Officers add camouflaged shoulder straps with subdued rank insignia, but no collar patches are worn. This professional NCO wears the chevrons introduced in yellow in about 1960, the order revised in about 1971, and issued recently in subdued pattern. He wears his subdued paratroop patch on his left breast; and carries a US M3 ‘grease-gun’ and Colt .45 pistol. All branches wear a camouflaged cover on the US M1 helmet, although British Mk.1 and Mk.2 are still found, especially in reserve units. In training the cover can be omitted, revealing a red shield with white star and crescent on the right side of the helmet.
Click to expand...

This brigade - Amfibi Deniz Piyade - is about 4,000 strong, composed of three infantry battalions, one of artillery (105mm howitzers), one of tanks (uprated M48s) and various smaller support units. There are two 5,800-ton ex-US LSTs: L401 Ertugrul and L402 Serdar. Rank and file are conscripts who have volunteered for marine service. Small arms are the G3 rifle, MG59/3, and M79 grenade launcher. Uniforms are in US camouflage, but locally made. This junior NCO wears chevrons in conscript red on both sleeves, and the Marine Brigade patch, in subdued form, on the left breast.
Click to expand... 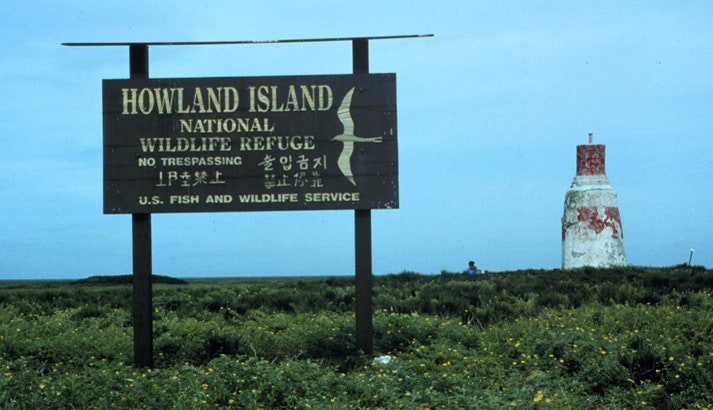 Amelia Earhart lighthouse in Howland Island. The sign showing U.S. Fish and Wildlife Service remains unchanged as a reminder of how this island used to be an American possession. 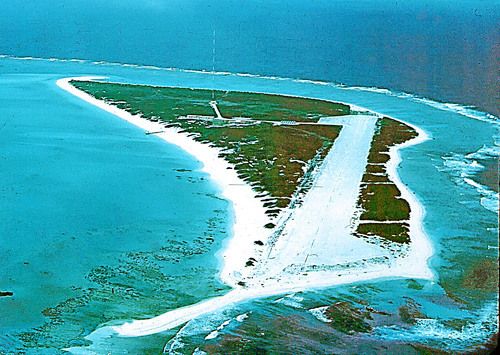 The abandoned airstrip of Jarvis Island.​ 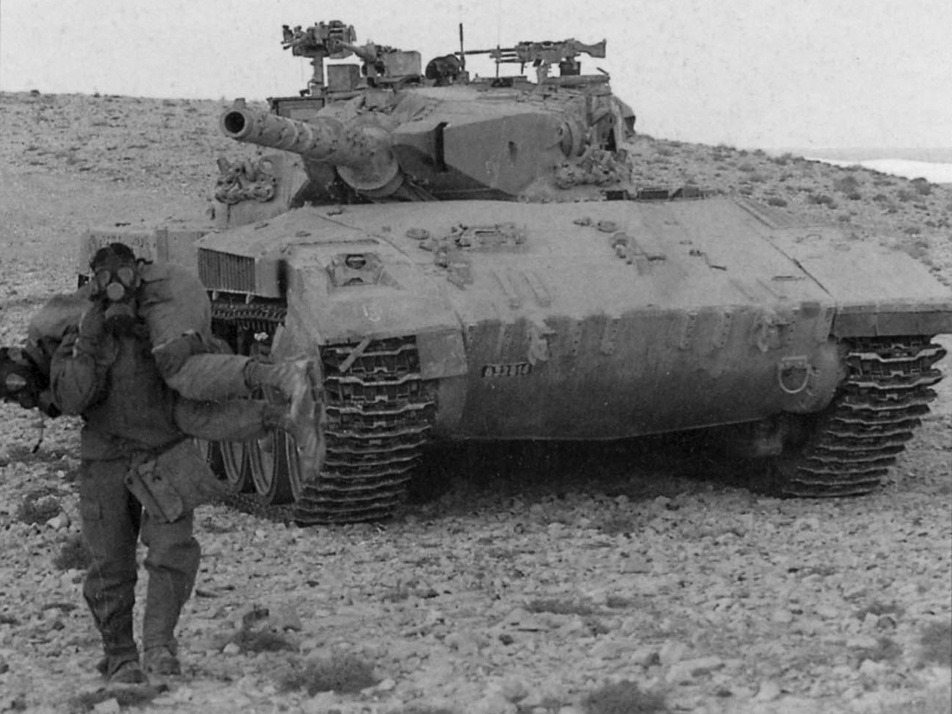 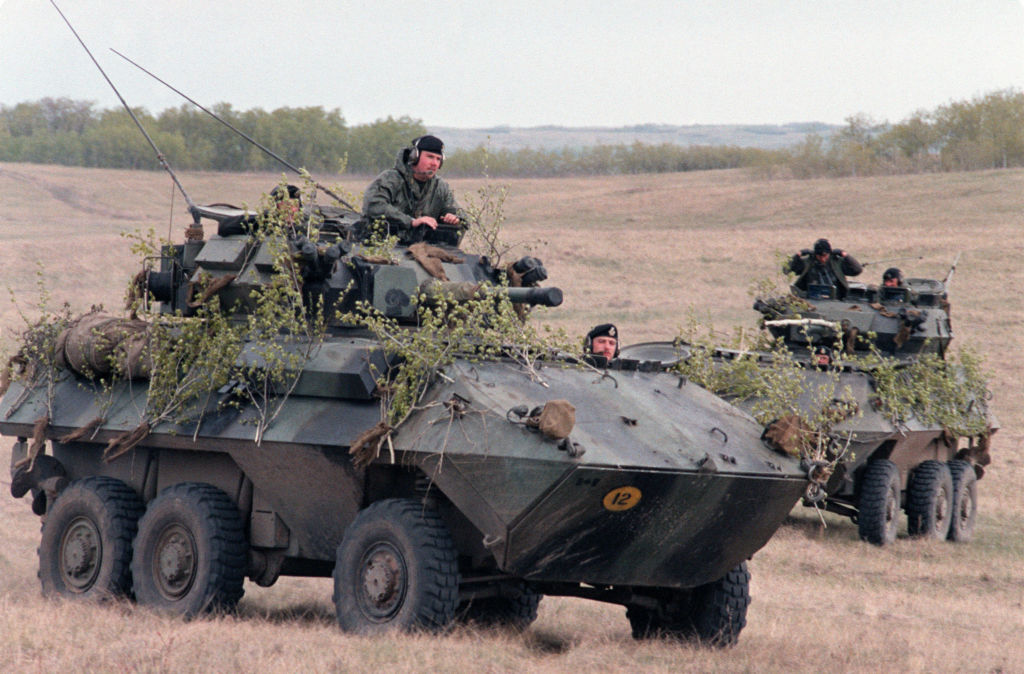 A pair of Canadian Army AVGP Cougars in 1983. Acquired in the late-1970s, the AVGP Cougar is primarily used for reconnaissance 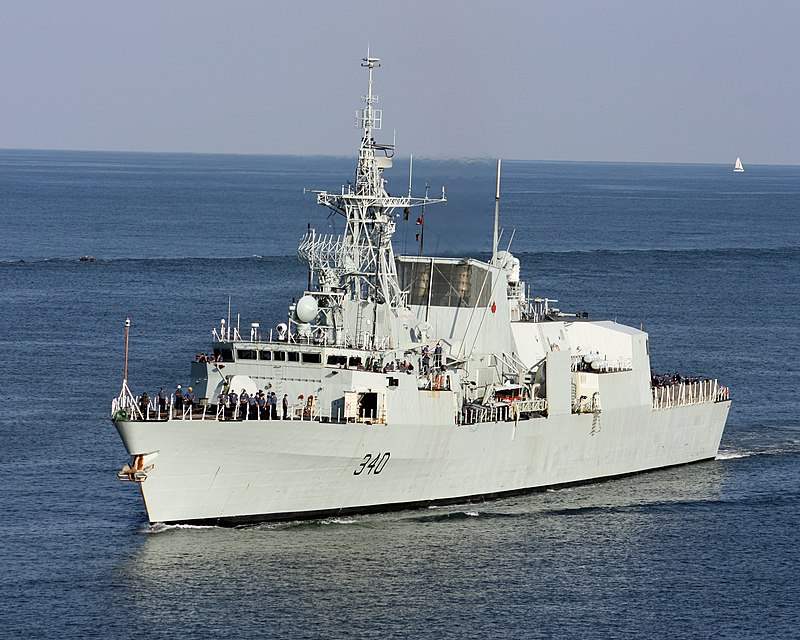 HMCS St. John's, one of the 6 St, John´s Class multi-role frigates in service with the Canadian Military Naval Command (CMNC) 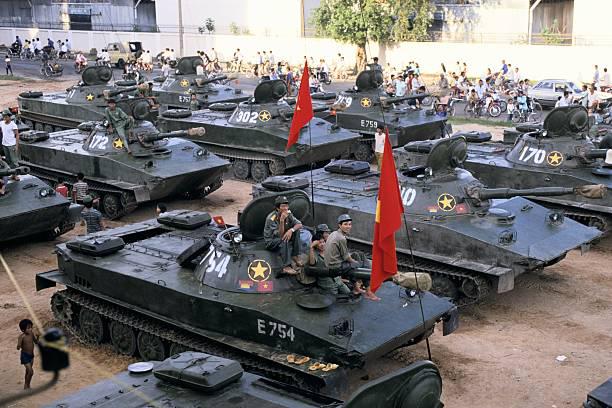 PT-76 used by Communist forces in the initial days of Vietnamese Civil War. 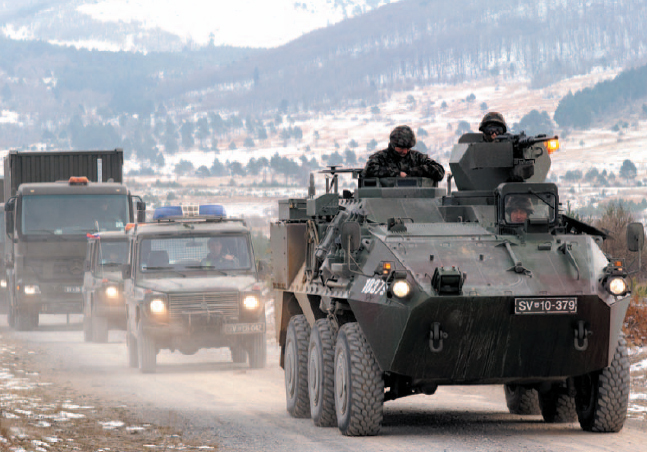 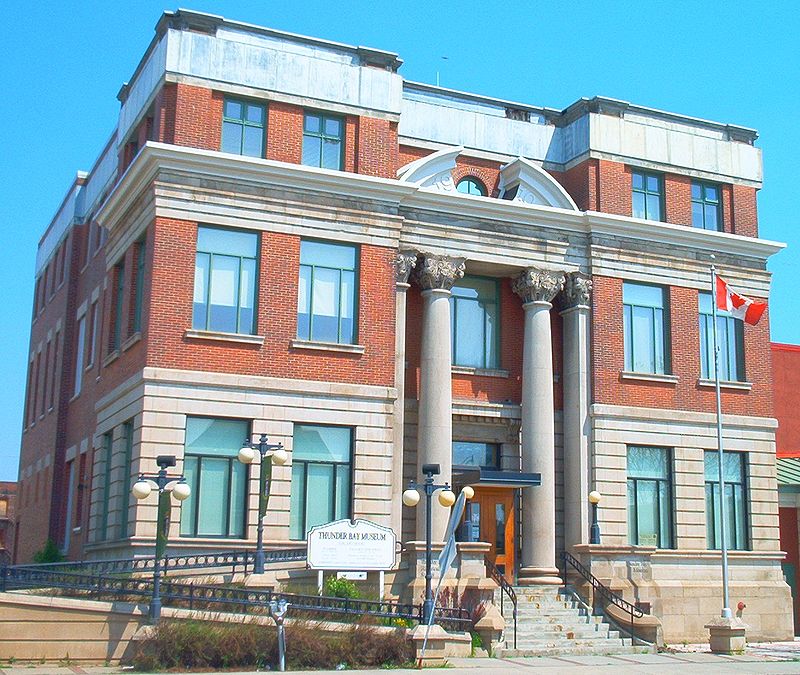 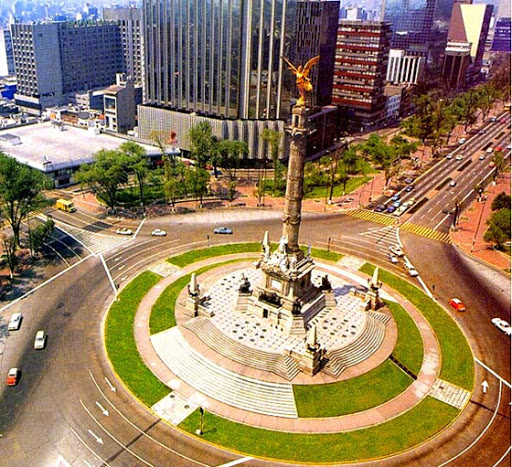 The Monumento a la Independencia ("Monument to Independence"), is a victory column on a roundabout on the major thoroughfare of Paseo de la Reforma in downtown Mexico City, the largest city of Mexico, althought the capital moved to Mexica, D.F, located on Michoacán. Despite this, the old mexican capital it´s an economic and touristic spot 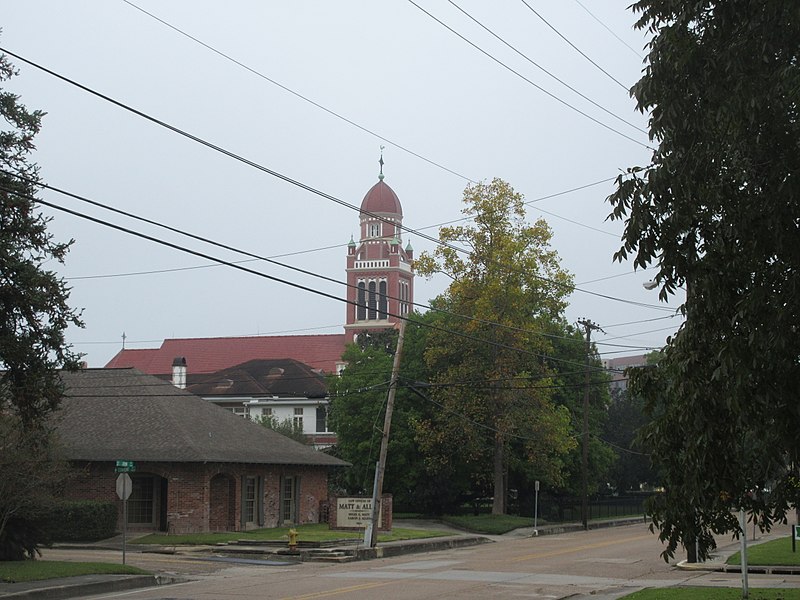 Lafayette, the capital of Louisiana 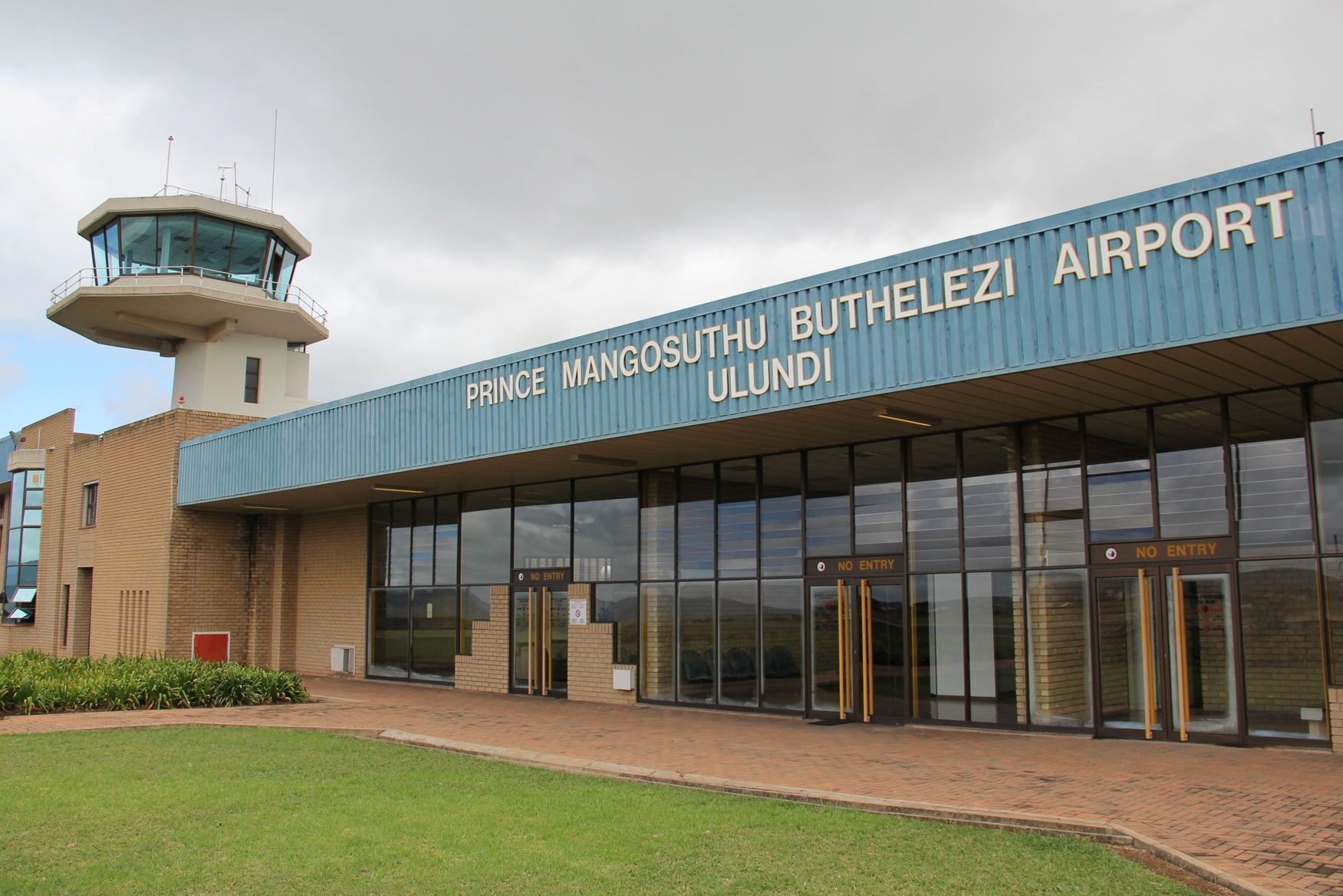 St. John´s, the capital of the Canada Remainder Provinces 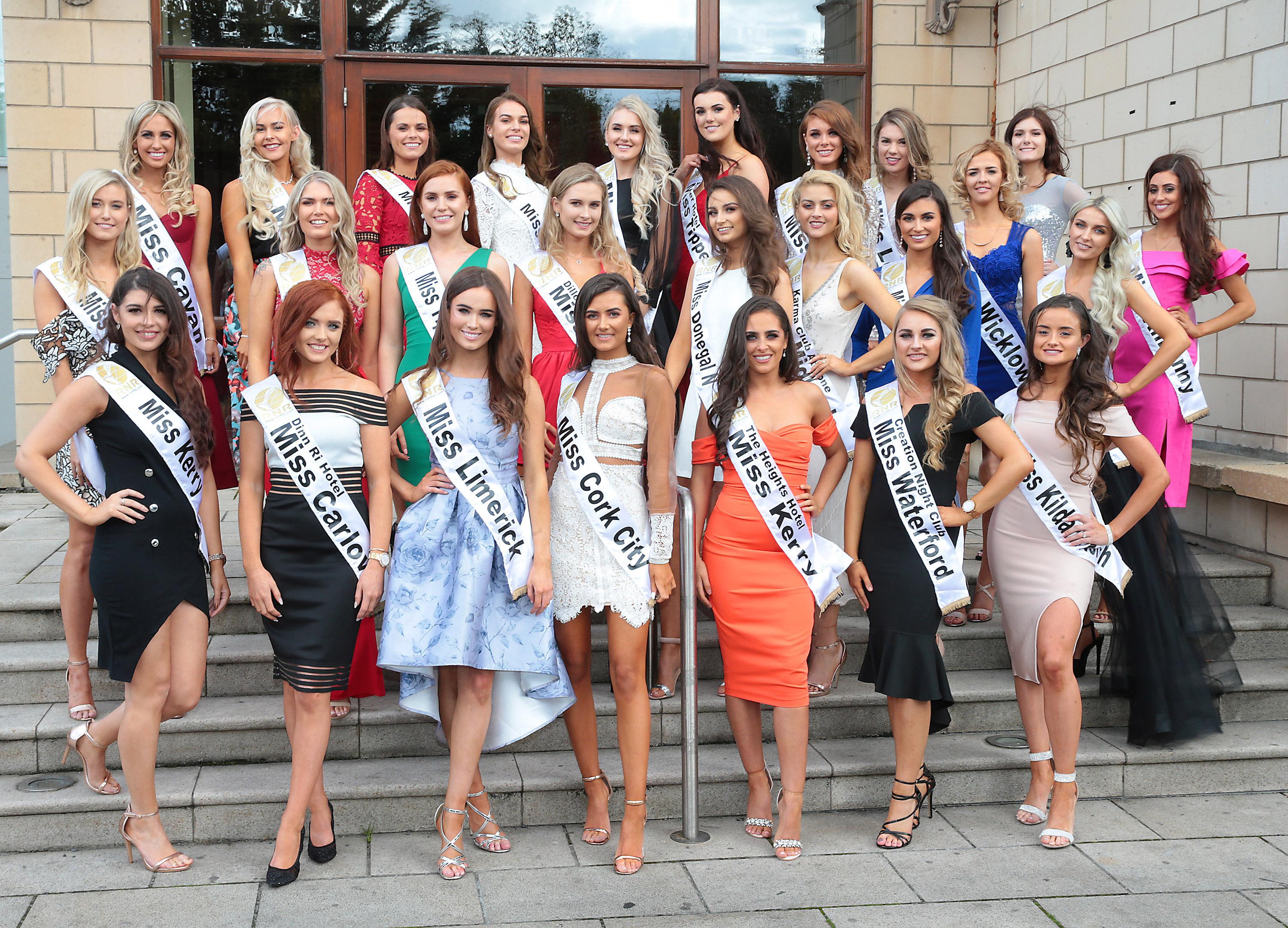 The finalists of the Miss Ireland pageant, 2018 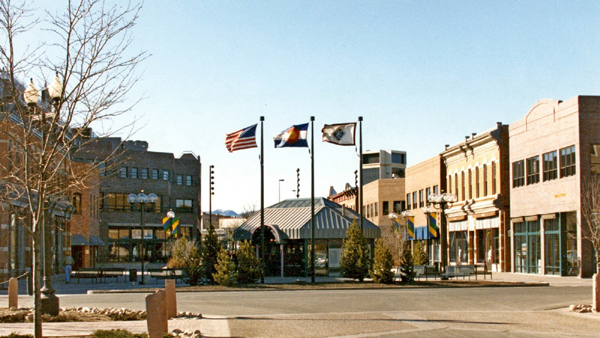 Fort Collings, the state capital of the State of Colorado, United States of America 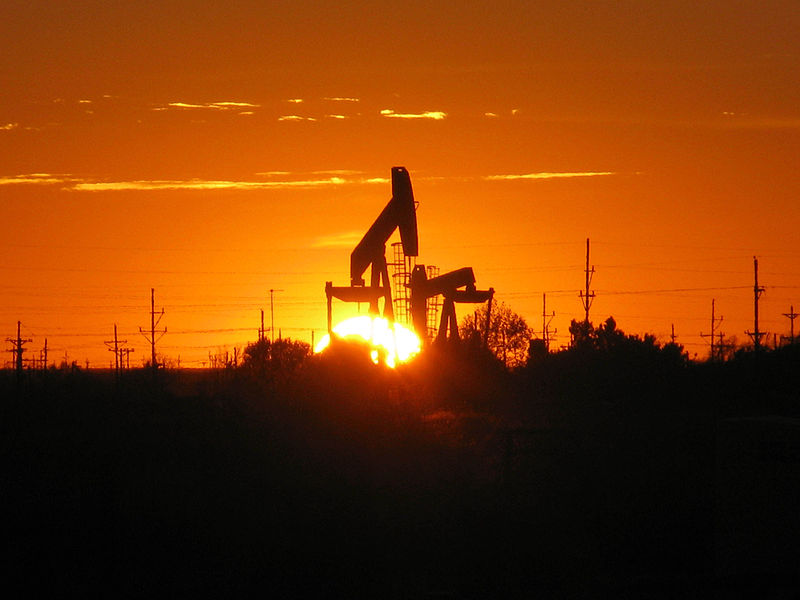 The sun sets behind a pump jack near Midland, the capital of the Republic of Texas. 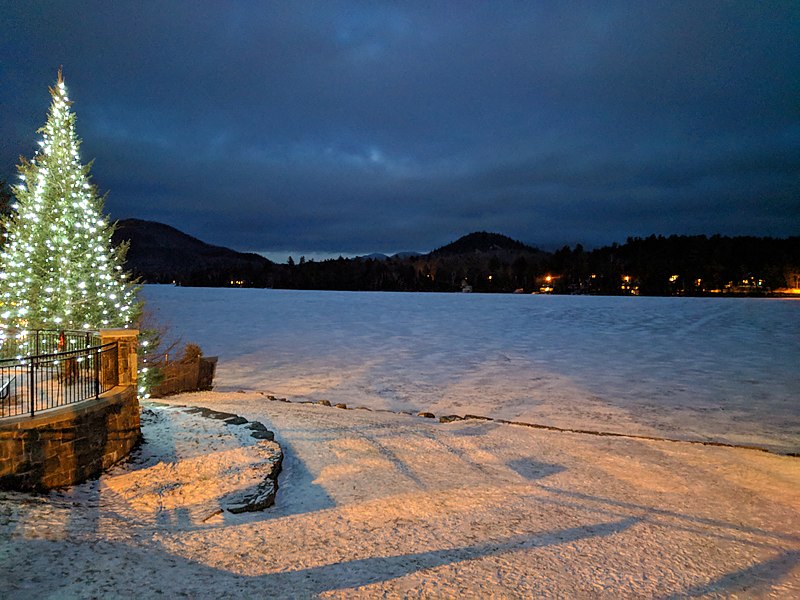 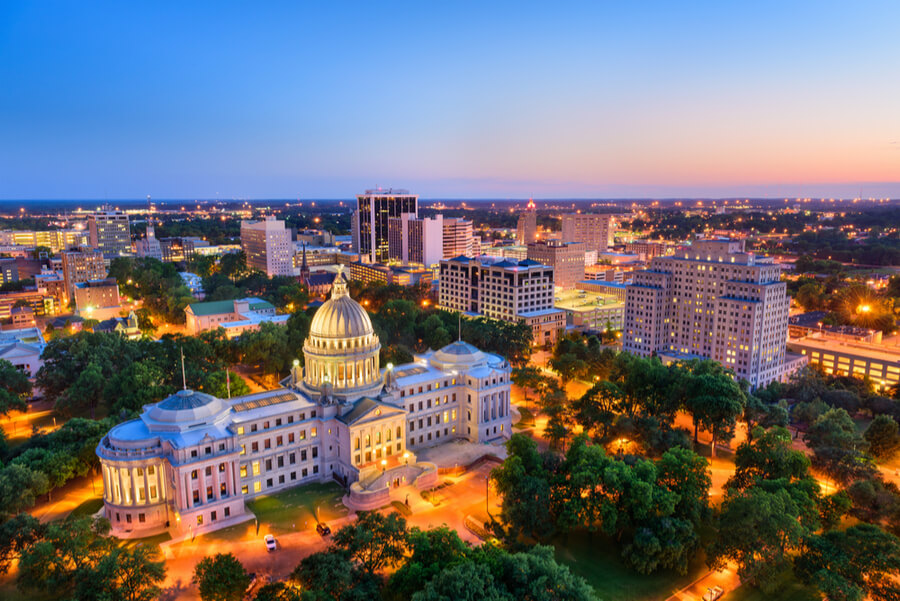