The Royal Hawaiian Navy received authorization to buy its second Nuclear carrier, The cost of the carrier had dropped to an estimated 720 Million dollars. The Navy was also purchasing the American made F-8 fighter. 144 of the planes were ordered 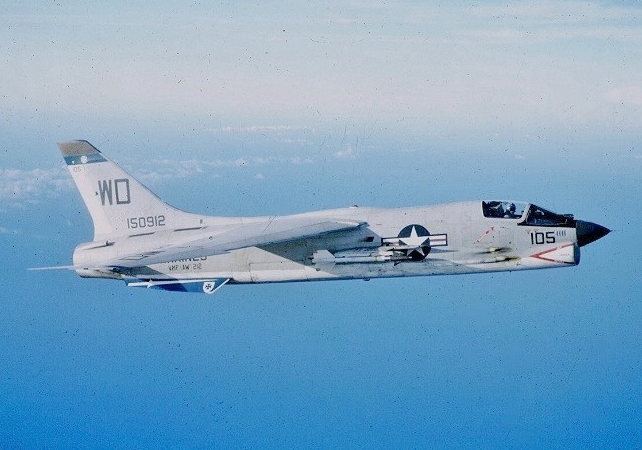 Hawaii's future King was now completing his education as a naval cadet. if his father had been alive he would have had a chance to serve as an officer in the Royal Hawaiian Navy but upon graduation he would in fact become King and thus never serve as an officer in the Navy. During the Summer he had served aboard a destroyer and would attend flight school. He spoke 6 languages and was a quick learner. He made friend in his class and among the foreign students that attended the Academy. Upon Grduation he went to the Navy's flight school and was able to become a pilot before leaving the navy to become Gregory I. He was proud of the fact that he held a commission as a Lieutenant in the Navy.

Work on the new nuclear carrier the Admiral William Kamehameha had begun and there was already talk of a third carrier the Charles Bishop.
The Royal Hawaiian Air Force launched a satellite into orbit marking a first. Hawaii and the US were going to work together to launch communication satellites.

Prime Minister Charles Richards proposed development of an Early Warning System and development of a Planetary Defense to prevent another Fall Event. He spoke with President Reagan,Kaiser Otto, and the British Prime Minister about the idea and all agreed that it was a good idea. It would take perhaps at least 1-2 decades to truly develop something perhaps longer so it was best to start now

On July 14,1970 the government of the Kingdom of Hawaii handed back to the Government of Canada the Fort Louisburg Base. It had spent a lot of Money on the facility and it spent another 29 million dollars restoring the old French fortress. The Canadian Prime Minister thanked the Hawaiian people for all that they had done for Canada during the Post Fall Period.

The Hawaiian Government suggested that the US,GB and Hawaii set up a joint research organization to help with the Terrean Defense Iniative so as to avoid duplication.

The Royal Hawaiian Government announced that the Walter Gibson would be the ship to follow the Charles Bishop. thus giving Hawaii 4 Nuclear aircraft carriers

Thus by the late 170s Hawaii would have 4 nuclear carriers as well as 3 conventional carriers. There was talk that Brazil was interested in buying another conventional carrier and having the Hawaiians up grade it. The Hawaiians still had 2 Battle cruisers armed with 12"/50 and the ships were going to go through a massive upgrade which would modernize them and allow for a reduction in the crew size

The Royal Hawaiian Navy announced that it would be making a change to the Nuclear Attack Submarine design. Eight submarines of the origional design had been built and now the remaining eight submarines would be of what was called the Block IV. the last submarine built of the design had actually been an alteration of the design. It was 4 fleet larger in length. The new design would be even larger as it would carry the new Tomahawk Cruise Missile. Construction would not start until 1972 or 74 as the ship yard would make some changes in structure and they would complete 2 more of the Block II for Australia.. The Royal Hawaiian Navy's Nuclear school was training Australian sailors and Brazilian sailors

The Hawaiian Prime Minister Met with the Chinese Ambassador and latter with the Japanese Ambassador in an attempt to arrange a cease fire. Hawaii did not want the two Asian powers to end up in a major conflict over the Han Protectorate. The Hawaiian Secretary of State flew to Chunking for talks and then flew to Tokyo in an attempt at shuttle diplomacy. President Reagan also spoke to the Japanese Prime Minister and the Chinese President. After three more days of fighting a cease fire was reached after Japan assured China that it would not move massive number of troops to the region.

This will be for the better, and will avoid unnecessary future conflicts between China and Japan.

In seperate conversations with the Ambassadors of Japan and China the Hawaiian Prime Minister praised the cooperation that both sides had given to resolving the issue of the Han Protectorate. Both had moved to avoid a major conflict which could have gone the other way. Japan's crown Prince pushed for a peaceful conclusion and had swung thingin that direction.
Talks were that Japan and the Republic of China would officially recognize one another with embarrasses in one another s country

In 1976 Charles Richards announced his retirement as both Prime Minister and as a member of the House. Patrick O'Malley became the next Prime Minister and called for elections in November. In a surprise to all Marie Lee Tamm leader of the Liberal Democrats managed to engineer a victory for her party as they won 265 seats to the National Conservatives 250. She went to the palace with Patrick and was accepted by the new King and was ordered to form a new government. The 34 year old had begun to form a government seeking a lot of new cabinet members. She ordered a defense Review.

Prime Minister Tamm had a problem in that there had not been a Liberal Democrat Administration and there was only one person who was a Liberal Democrat that had served as a Cabinet official and that was in a National Conservative Administration. Thus she looked at academics to fill some of the cabinet post and retired Military to fill the Secretary of Defense. Rear Admiral Piere Wiliamson was a retired Naval officer who came from Tahiti and who had served in the Royal Hawaiian Navy from Age 18 to 57. He was currently 60 and aged to serve. Colonel George Tashi RHA-Ret was appointed as the new deputy Head of the Royal Hawaiian Intelligance Agency. Ian Bond a phd in Foreign Affairs was the new Secretary of State

Patrick O'Malley resigned his seat in the house and running in a special election was the son of the first female Prime Minister. Christopher W McNammara was the second son of Katherine. He had graduated from the Air Force Academy and had in 10 years risen to the rank of Major. He had left the Air Force and decided to try his hand at the family business=Politics. When Patrick had resign following his loss to Marie in the National election he had decided that it would be best not to remain and have a potential Political Scandal. He and Marie Lee Tamm had gone out on a blind date and had hit it off. So now he had returned to O'Malley Investigations and Security.
Last edited: Feb 10, 2020

Major McNammara had won the National Conservative endorsement and won the election with 85% of the vote.He took a seat on the Armed Services Committee, Intelligence and Judicial. The Major had graduaed with a BS degree and went on to get a Masters degree in Avonics and a LLB . He passed the Bar before running.

The four years of the Tamm administration had some major disagreements between the two parties. Basically she slowed or postponed the construction of some Major warships and aircraft. Her administration Defense White Paper questioned the need for more nuclear submarines and Aircraft carriers. Thus she chose to pause any further construction. Money was spent on a study of a future Nuclear attack submarine and data was being looked at regarding the King Kamehameha III CVN class,
In the spring of 1980 design work began on the Admiral William E Thompson Destroyer class and construction would start in 1981 if the house approved.

Christopher W McNamara was named the ranking member on the Armed services committee. He was fully prepared to challenge the Liberal Democrat Defense spending proposals. He proposed that the Air Force and the Navy buy the F-4 Jet Fighter. As a reserve Royal Hawaiian Air Force Pilot he had had a chance to fly it when in California on a reserve training mission.
Threadmarks
You must log in or register to reply here.
Top
Top